Well of the Worm with Big Bird and Friends 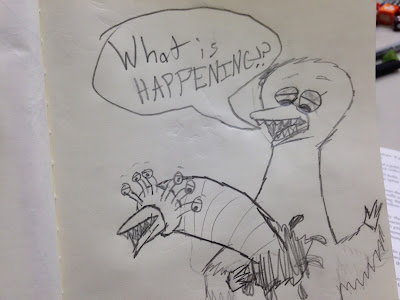 It's Friday night, and you forgot to prepare for your Dungeon Crawl Classics Road Crew event with the Norwin Game Knights, but you only have an hour before you need to pack your crap into your 2009 Chevy Traverse and hit the road.  What do you do?

I'll tell you exactly what you do.  You grab your copy of DCC #76.5, Well of the Worm by +Harley Stroh, and you start reading.  Remember that adventure?  You bought it at Gary Con a few months ago, and it's been waiting to get played.  It's been begging to get played.  Don't let anything hold you back.  Your kids may be screaming that they can't find their shoes.  Your wife may be upset that you haven't taken care of the dog yet.  You ignore all of that crap and focus on those words.

It's only twelve pages that you need to read.  You can do it!  You have to do it... because lives may depend on it. 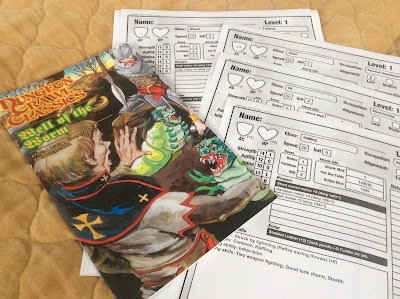 Okay, in all seriousness, last night wasn't quite that dramatic, but it wasn't far off. Running games with the young players at Norwin Game Knights' Open Game Night is definitely a matter of life or death. Mostly death. Thankfully, it's so easy to create and print character sheets over at the Purple Sorcerer's site!


I was short on time, and had forgotten to prepare an adventure before the game.  Maybe "forgotten" is not the right word, how about "put off."  I knew that I'd need to throw something together and had given some thought to just using my random dungeon dice and some Rory's Story Cubes in the same fashion as that legendary Centi-goats of Centaurus 7 (Featuring Snoop Dogg) adventure.  But at the last minute I changed my mind and wanted to toss something together that was a bit more formal.

We've done a lot of funnels in our club, so it was time for a 1st level adventure.  But I needed something short... something like Well of the Worm. 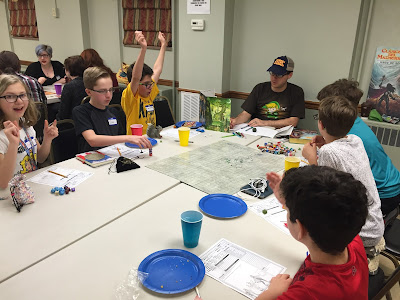 Well of the Worm is a +Harley Stroh adventure that first appeared way back in DCC #29, The Adventure Begins.  DCC #76.5 is a conversion by Daniel J. Bishop that updates Harley's original work to the Dungeon Crawl Classics Roleplaying Game.

You see, kiddos... back in the old days, DCC adventures were created using the Dungeons & Dragons 3rd Edition (or 3.5 Edition) rules.  This was before all the glorious Spellburn, Corruption, and Luck mechanics that we know and love now.

I'm so glad that I picked this adventure to run last night!

To start off, it's a really quick read.  Sixteen total pages that include two handouts and a map.  Only twelve that you actually need to read.  Even though this adventure is digest-sized, the print size isn't shrunken and is very easy to read.  I read through the adventure in less than twenty minutes, and that included some time to take notes before the game.

The plot is fairly basic, and seems meant to get plopped down in just about any campaign.  There's some wicked-bad, worm-like evil lurking at the bottom of a cursed well, and the PC's need to go dungeon-delving.  Evil wizard, giant worms, worm-breeding pits, lots of good stuff for young players.  This was a great adventure for our beginners too, as the first few areas, while linear in placement, require serious problem solving.  As the adventure progresses, the map opens up, along with exploration options.

Keep in mind, that Well of the Worm is relatively short in play-time, which can be perfect given the right circumstance.  There are only twelve areas to explore, and some of these are just subsections of larger sections of the map.  The adventure also offers a series of wormy random encounters.  I opted to run the adventure without the random encounters, and we completed the game in about two-and-a-half hours.  In truth I need another thirty minutes, and had to rush the end scene.  Experienced players could've buzzed through in about two hours, and with the random encounters and maybe a few add-in areas I could've pushed to four.


Great adventures can be written, but great play sessions require the effort of a fun and dynamic cast of characters.  For last night's session we had:

For such a short game, we had some terrific character development, especially revolving around Ryan's character Woobloo.  At the start of the game, I informed Ryan about taking on corruption to boost his spellcasting.  He wanted no part in this process!  But when he cast his first Flaming Hands, and was about to lose access to the spell I had a voice call out to the wizard.

"Accept it!  Accept the corruption!"

Woobloo agreed, and the wizard gained a snake tongue and nose slits.  Well this took us down an interesting road!  Ryan kept rolling poorly on spells, so he kept going to the corruption well.  When he randomly rolled a snake head for corruption, I decided that this would be an "all-snake" theme.  He also lost his legs and gained a snake tail.

And that voice?  It was the patron Azi Dhaka!  We had a great time role-playing that interaction as Ryan tried out Patron Bond and suffered the consequences afterwards.  Too bad this game was a one-shot!  I'd love to see more of that interaction.  Perhaps we need to see Woobloo again in a future game.

We should probably discuss how Big Bird got involved in this game.

The party was looking for a way to clear a room of all worm larva, and Ryan came up with the idea of summoning a giant bird to eat all the worms.  Great idea, and I love saying yes!  His wizard had the Animal Summoning spell, and he tossed in some Spellburning to boost the power.  The result?

"Sure," I responded with an evil smile.

And so, the giant yellow bird appeared and devoured all of the worm larva.

Ryan was enthralled at this point!  Even though he'd only have Big Bird for two hours, he wrote down the monstrous minion's stats, and Evan included him in Woobloo's character portrait.  But there was a price for all that worm eating.

Several scenes later, while the party was defeating the evil wizard at the heart of the adventure, the team noticed that the flesh beneath Big Bird's feathers was starting to writhe.  The worm larva was taking hold!  As soon as the wizard died, a giant worm burst out of Big Bird's chest, tearing the bird apart.

I asked the players if they had ever seen the movie Slither, but unfortunately none of them had.

Once the giant worm had been defeated (I used the stats for the Mother Worm, but with a few more hit points), I had the entire dungeon start to collapse...

... because that felt right.

As the rest of the party fled, Woobloo heard a voice calling from behind him.  It was Big Bird!  All that was left of the great yellow avian was his fat, feathered head.  And it was calling for help.  Oh the anguish!  But Azi Dhaka demanded that Woobloo destroy the head as proof of loyalty... which Woobloo did.

One of my favorite moments during the game was when one of the new players seemed aghast that Carrie and I were talking about her character, Squip, worshiping Cthulhu.  I informed the player (I think it was Evan... new Evan not LOMLOI Evan) that in our family game night campaign, my wife's character is a priest of Cthulhu as well, so "like mother like daughter."

"Hey... that's how we roll," I responded seriously.