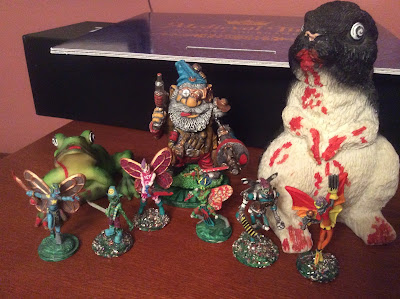 I spent a lot of time this weekend chatting with my friend +Ray Slakinski about miniatures, and painting miniatures. Sure, I've done a lot of Battletech mini's, and I have an entire squadron of Crimson Skies minis. I even have a Warhammer Fantasy army's worth of Mordheim mini's; enough for 5 decent sized warbands, not including special figures and hirelings.

But none of this compares to my pinnacle miniature painting achievement: my Fairy Meat collection!

I painted these back in 2003, just after purchasing the Fairy Meat rules by Kenzer & Co. The entire line was a riff off of their Knights of the Dinner Table comic. To this day I've never met anyone else who's painted Fairy Meat minis, and "back in the old days" I had to provide all the rules and figures to get anyone to play with me.  No one else had that same FEVER for Fairy Meat that I had.

But these miniatures represent a pretty important shift in my life.  At the time, I was a fairly recent college graduate and only a year into a new marriage.  We'd soon find out that our eldest Carrie was on the way.  So I painted these minis at the absolute perfect time in my life: I had money, I had time, and I didn't have anyone asking me questions about crazy crap all the time. 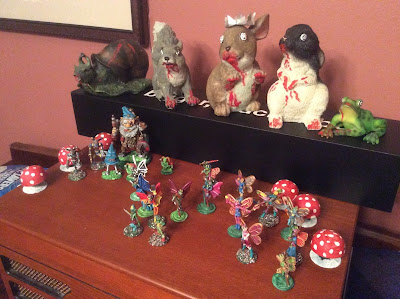 Let's start with a look at the full collection.

In the front row I have a Gnome with his mechanical hat-bomb, a pair of gremlins, and a pair of clock fairies.  Next is my Moon Fairy band with a pair of pixies.  Finally, to the right, are my regular fairies.

The stuff in the back row aren't really "official" Fairy Meat miniatures.  Those things are lawn ornaments that I purchased, covered in blood and swirly eyes, and used like "Tanks" in my game.  I wish I could claim that this was my idea, but it was a recommendation out of the main rulebook.

For the toadstools, I had purchased tiny, miniature plastic wine glasses, cut off the stems, and reattached them upside down. 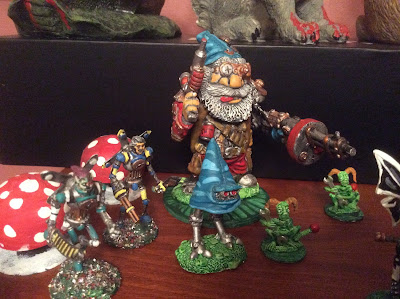 The gnome itself was a behemoth to construct, but ended up being one of the easiest things I've ever painted.  When I first glued it together, there was a giant gap in the back.  So I had to work with Green Stuff, which I found quite foul... but it worked.

Note the bases of the clock fairies.  All of the main miniatures (save for the gnome) were based on coins, and I even "sparkled" a few of them with glue and glitter.  I still need to get around to finishing the glitter on many of them. 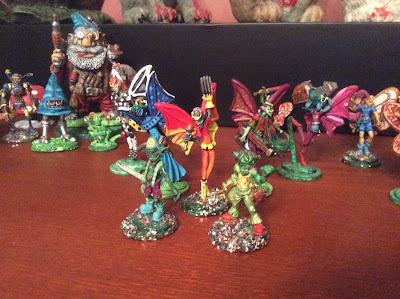 The Moon Fairies.  My favorite to paint!  The two pixies in the front were my very first paint jobs in this series.  The one on the left turned out better, but when you have a dagger and an evil grin it makes it a lot easier to paint you. 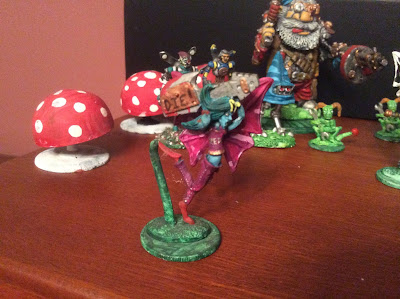 Fun fact: my favorite band of all time is the Smashing Pumpkins.  This was my "Smashing Pumpkins" fairy.  Hard to tell with my iPad camera, but if you zoom in, this guy's shirt says "Zero."  Unfortunately I couldn't shave his head like Billy Corgan. 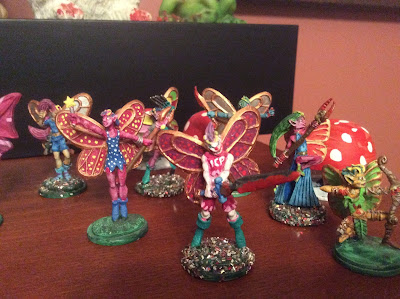 I'm pretty happy with how the evil, "ICP" fairy and his friends turned out.  He's definitely my favorite of this group.  When you think about Fairy Meat being a 1:1 scale game, I think it makes this guy even more frightening.  Just think about this little beastie getting loose in your house with that tiny blade! 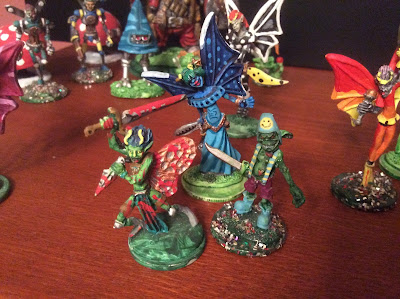 Just another close-up as I wrap up this short post.  I've recently uncovered all of my Mordheim miniatures, and I plan on learning the Frostgrave skirmish game soon.  It helps that Evie seems to have an interest as well.  I'm not sure if I'll get time to paint at this level anytime soon, and to be honest I always figured that I'd have to wait until my retirement.  Perhaps I'll find the time, and a year from now I'll have something to show for it...

... or perhaps I'll just find a way to use these Fairy Meat miniatures in Frostgrave!