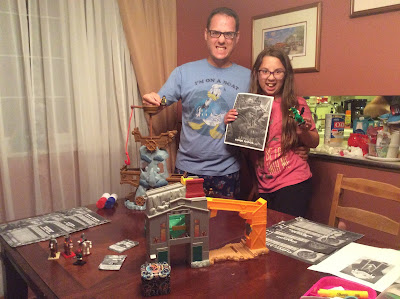 When I started getting back into miniatures gaming a few weeks ago, I knew that there was a chance that a marauding Kickstarter campaign could potentially cross my path, forcing me to dive headfirst into a quest to acquire a bunch of figures for my ever expanding game collection.  Leave it to Pulposaurus Entertainment (a new division of one of my favorite gaming companies, Pinnacle Entertainment Group) to resurrect the Conan: Rise of Monsters (or CROM) Kickstarter, with the alluring promise of heroes and villains of the Hyborian Age.

While I wouldn't call myself the greatest of all Conan the Barbarian fans, I'm no slouch when it comes to a certain, special Cimmerian.  Like any child of the 1980's, I got to watch both Conan the Barbarian and Conan the Destroyer at a young age.  Truth be told, it wasn't until my twenties that I begrudgingly admitted the superiority of the Grace Jones-less original.

It was also in my twenties that I finally started reading some of Robert E. Howard's Conan stories.  Although it was one of the first that I read, I still consider The Tower of the Elephant to be my personal favorite.  I wasn't aware that the early, pulp authors often mixed elements of what we would call fantasy and science fiction today.  So the concept of some otherworldly elephant alien appearing in a sword and sorcery story blew my mind!

The promise of a savage Conan miniature, raging across my beat-up dining room table, taking down evil priests of Set, required me to take a look at this Kickstarter campaign.  Granted, the fact that I've never been disappointed by a Pinnacle Entertainment Group Kickstarter Campaign helped.  The pre-painted miniatures looked awesome, as did the Reaper terrain.  I'd get a chance to look at the rules later.

I strongly suggest getting the details about Conan: Rise of Monsters from its Kickstarter page, but here are some quick details at a glance:

Admittedly, I was a little taken aback after reading further.  I'm a seasoned veteran of RPG Kickstarter campaigns.  I can back at a few dozen bucks and get a slew of PDF's, or raise that to one-hundred and get some nifty physical rewards.  Conan: Rise of Monsters does not come cheap!  The base "Conquerer" level is $150 before shipping, while getting all of the production miniatures kicks you up to the "Warlord" level of $300.  If you want the terrain as well (and dammit I do, but I'm on the edge already), you're at $500.

If I backed this one, it would be one of the most expensive Kickstarter campaigns I've done. The only two that even come close for me would be last summer's Deadlands 20th Anniversary campaign, and the campaign for The Strange by Monte Cook games. 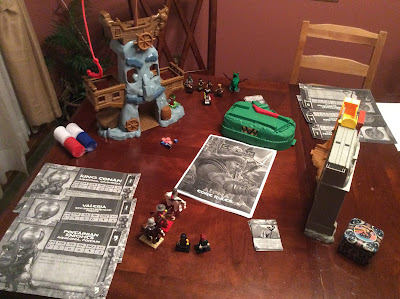 For this Kickstarter, Pulposaurus Entertainment made all of the beta rules, unit cards, and Fate cards available as free downloads on DriveThruRPG!

We set our game up as follows:


My daughter Evie is the closest thing to a fellow mini's gamer in my house, given her love of X-Wing, so she quickly volunteered for this first session. 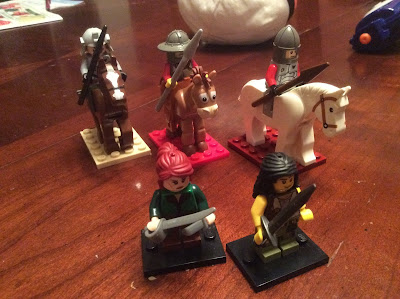 I played as Conan's Circle of Iron, creating the following units out of Legos: 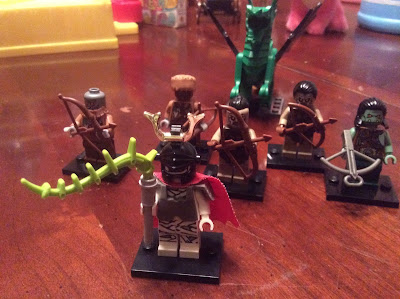 Evie had to be the villains, because she only does "bad guys."  She went with the Legion of Set:

Was this a balanced encounter?  It looked like it on paper, with each side sporting twelve points, but to be fair, I wasn't going for balance.  A couple nights before, Cooper and I went through all of our Legos trying to build something that resembled CROM-worthy figures.  This was as good as it was going to get!

The Battle of the Green Mound

I read the rules the night before, and everything seemed pretty straightforward.  Evie took some time to review the rules while I set up the battlefield.  This being our first game, I knew we'd make quite a few mistakes.  Our goal was to give the rules a shot, get an idea for the mechanics, and most importantly, have a good time. 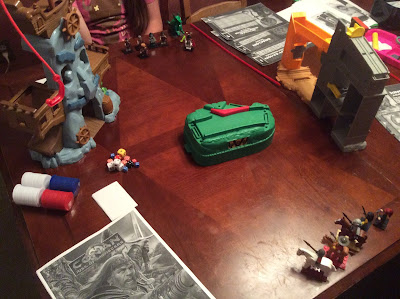 I arranged my Poitainian Knights to the left of Conan and Valeria, while Evie put her figures in front of the Dragon. 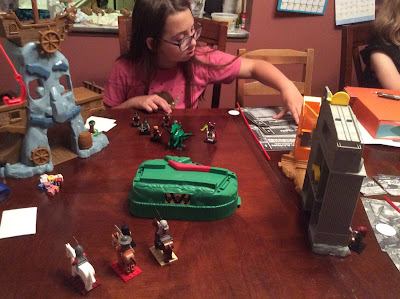 In that first round, we both carefully crept across the map.  It looked like most of the forces were going in the same direction, although I did sneak Valeria off to my right, hoping that she could get the drop on the evil Thoth-Amon! 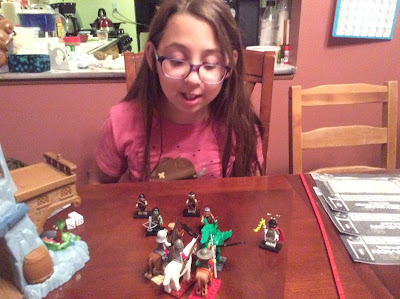 When I noticed that one of my Poitainian Knights had a direct line of attack on Evie's Dragon, I "charged!"  In hindsight, we kind of screwed up this rule.  I went and had the Knights do a double move on their charge, but after reading the rules again, this isn't exactly how it works.  Figures can move their full move first, and then need to roll to see how much further they go on a charge. 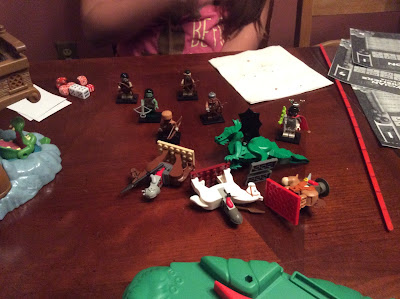 Not that the charge worked out well for me!  True, my Poitainian Knights killed Evie's Dragon, but the Dragon returned the favor.  In CROM, the defender gets a full attack before dying.  Another rule we left out here was using the Destiny gems... okay, technically we knew "how" to use them, we just didn't realize that we should've.  Destiny lets players add dice to their rolls, either on attack or defense.  Evie could've bolstered the defense of her Dragon, and probably should've. 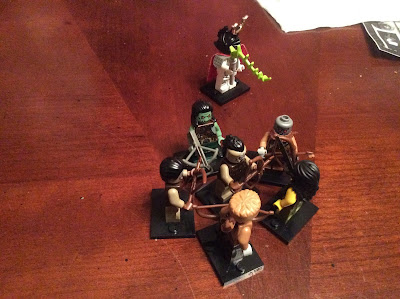 There was some shooting back and forth between Thoth-Amon and Valeria, until Conan showed up.  Here's where things really felt like an action movie, and I could hear the booming Basil Poledouris soundtrack in my head.  Conan charged the Stygian Skirmishers... 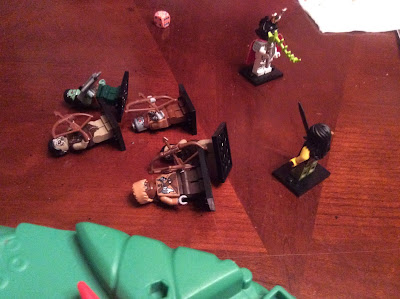 ... and killed them all in one swipe!  It really helped to have a Fate Card that let me turn all my "Shields" into "Swords!" 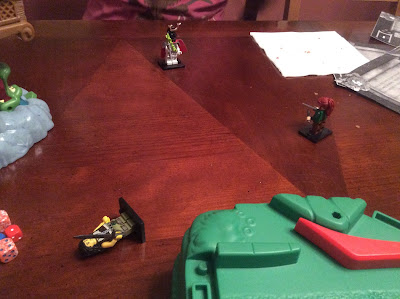 Thoth-Anon wasn't having any of this though. 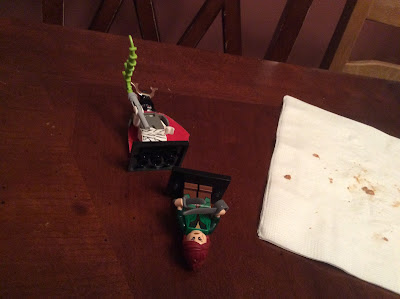 Valeria charged Thoth-Anon the next round, and the two killed each other quickly. 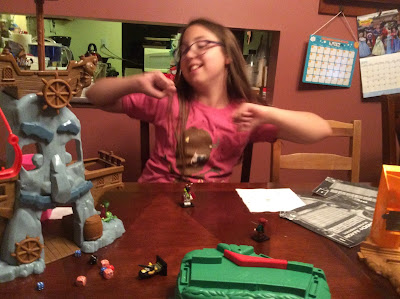 Now I'd consider this to be a draw, or a tie, but not Evie...  Evie considered this some kind of weird victory.  According to my middle-child, just the fact that she prevented me from winning, meant that she won.

I don't get it either. 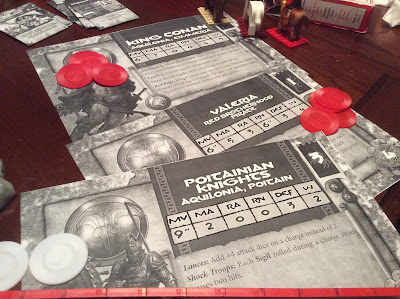 So how did we do on the rules?

For the most part, we picked them up quickly.  For the first few turns we were forgetting to use the special attacks and powers of each unit, but by the end of the game they were in full force, as well as Destiny.

I think the Fate Deck was my favorite element in the game.  Not knowing what cards Evie had up her sleeve meant that every action had potential risk.  The Sigil dice have more swords than shields, and for many figures, rolling a Sigil allows for more potential damage.  But the opposing player's Fate Deck can completely change the course of a battle.  Yeah, it's great that Conan gets to charge in and roll a ton of Sigils, but when Evie's Fate Card made me reroll my entire attack, it changed the entire nature of the round.

Here's hoping that Pulposaurus Entertainment churns out a TON of Fate Cards! 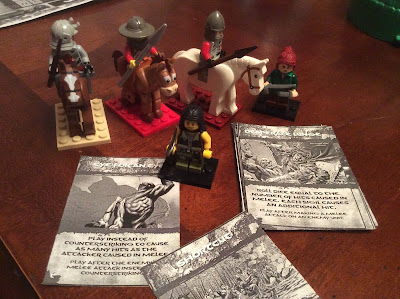 This is a big crowdfunding campaign, with a pretty steep barrier to entry, so let's cut right to the chase.

Conan: Rise of Monsters seems like a fantastic game for casual miniatures gamers, or those just getting into the hobby who do not have the time or skills to paint their own miniatures.  If you find yourself leaning more towards X-Wing over Warhammer 40K, you may be in this demographic.

This is essentially MY demographic!

I hate to steal from Savage Worlds, but since it's a Pinnacle product I'm going to: the rules for CROM are "fast, furious, and fun!"  The sixteen pages of rules did leave me thirsting for more.  Having read the rules for Frostgrave recently, and being very familiar with Mordheim, I may actually prefer CROM's system, however sixteen pages doesn't seem to scratch the itch.  I want more backstory, and more flavor text!  Fortunately the Kickstarter campaign promises an add-on book at the Warlord level, and another PDF as a stretch goal.

I'm a bit more torn when it comes to the Reaper terrain.  Let's be clear: I want it!  Just like the Fate Decks, the terrain has mechanics.  But it feels weird for me to be playing with 3D miniatures on a 2D board.  I wish that either A) the terrain was offered as part of the lower level rewards, or B) the terrain was pre-painted.

For those of you who enjoy painting your own miniatures, this may not be your game.  The Kickstarter states that you can add your own detail, and I've seen some awesome, customer X-Wing paint jobs.  But if you like cutting sprues, adding pieces, and creating your own forces, this could be a turn off.

Personally, I really enjoyed the game and look forward to playing again with the kiddos.  I'm excited to see where the stretch goals go, and hope that a few more extra miniatures get tossed into the mix.  I can see this as one of the games where the kids wouldn't need me to help them with the rules, although once the rewards arrive, I'm not sure that I'd trust them with $300 of miniatures!

They can keep playing with the Lego mini-figures.