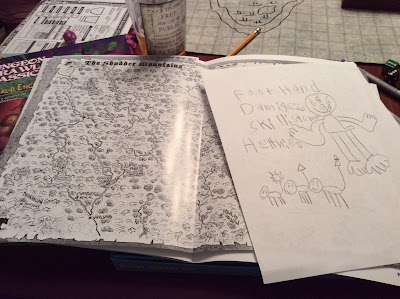 Initially I was going to run The Emerald Enchanter by +Joseph Goodman, and that is still my plan for our next module.  I spent an hour or so reading up on the adventure earlier this week, and was excited to introduce this "classic" Dungeon Crawl Classics module into our game.  But then I remembered that The Emerald Enchanter sort of needs a village or town to serve as the adventure hook.  Unfortunately the player characters in our campaign alienated the village of Hirot, and sided with the Frawgs during Attack of the Frawgs.

To tackle this next adventure, the party would have to find civilization.  Therefore I thought I'd introduce some hex-crawl elements to the adventure, and I pulled out the Shudder Mountains area map.  Where the party next would be completely up to them, and if it turned out that they didn't find a village, I'd just prep something else for the next  session.

Fortunately for the player characters, they did come across civilization... sort of.  While heading north away from the swamp, they discovered a bashed up cart with two completely flattened creatures: a human and a donkey.  The cart was full of potato sacks, each one stamped with the phrase "property of Basil the Slow."  Off in the distance, a lone donkey was standing amidst the trees.

Let me stop for a moment to discuss how I designed the rest of the session.  There were three primary sources of inspiration for this week's sandbox experience:


It didn't take long for the party to meet FootHand the Alien.  Sir Huey and Jeffff walked over to the donkey, and suddenly a bright light appeared above their heads.  FootHand the alien jumped down, threatening the party with certain death!  Walden used a grappling hook to jump up into the alien's hovering flying saucer, and dodged alien-dog attacks while stealing a "magic" wand from a control panel.  P. Specs tried to sooth the alien by offering him a flask of light beer, but apparently FootHand preferred IPA's.  Finally, the Wize Wizard McBride traded his precious beaver cape for a truce.  The alien flew away in his flying saucer just as Walden jumped down.

Turning back to the donkey, Jeffff offered a greeting.  Surprisingly, the donkey responded!  He said his name was Basil the Slow and that he, his brother Beau, and his hired hand were beset upon by a stomping alien while out selling potatoes.  Basil asked the party if they would help him repair his wagon (a task that nearly killed Walden), and the entire group headed north for the village of Ugly Bottom...

... seriously, there is a lot of weird crap in this adventure that I was making up on the fly, but the name Ugly Bottom is straight out of The Chained Coffin boxed set.

Once the team got to Ugly Bottom, I dialed up the crazy randomness of the Vornheim charts to generate a bizarre town.  I injected some of my own gonzo as well.

The party met Basil's very human wife Elaine.  Or was her name Eileen, or Elana, or Ellen?  Apparently Basil's wife's name was not set in stone and seemed to change periodically.  Basil (and his brother Beau) told the characters his tale of woe, and how he accidentally ate a cake in the woods that turned him into a donkey.

The party visited The Scorned Cousin, a tavern and inn that served as Ugly Bottom's community center.  A ferret named Tatiana owned the establishment, and all of her servers were young lads who called themselves the Wenchmen.  On the wall of The Scorned Cousin was a large bulletin board, noting all the potential missions that required adventurers.  One of the requests for service involved stopping the Emerald Enchanter from stealing local citizens of Ugly Bottom for his horrific experiments.

The bulletin board posting for this quest was actually a copy of the real adventure cover.

The most popular game in The Scorned Cousin was something called Truth or Challenge.  Raising your glass in the air served as your invitation to play, and the best ToC player in Ugly Bottom was the evil hexcaster Biff.  P. Specs accidentally started a game with Biff, and ended up being forced to share his real name (Potato) to Biff.

Tatiana warned the party that this would go badly for P. Specs, as Biff could use the name to control the thief at will.  The session took a weird turn, as the party searched for ways to help free P. Specs of Biff's future enchantments.  They discovered the existence of a creature known as the Namingway (ripped from Final Fantasy IV) that visited Ugly Bottom on Thursdays.  Supposedly the Namingway could change your true name... for a price.

The party also learned that Biff himself was under an enchantment, and could not fall asleep within the village limits, in which case he would die a most horrible death.  Choosing this method to dispatch Biff, the party returned to The Scorned Cousin and initiated a second game of Truth or Challenge.  When Biff arrived, the Wize Wizard McBride cast Word of Command on Biff, forcing him to fall asleep.  He then melted into the floor.

In a sudden surprise, Sir Huey challenged Tatiana the Ferret Bartender to Truth or Challenge, and demanded to learn how to create a spacecraft...

... because this is a talent that all Ferret Bartenders know.

Tatiana gave Sir Huey a book (the Idiot's Guide to Building a Spacecraft) and claimed that all of the components to design such a vessel could be located within the Shudder Mountains... artifacts left behind by ancient astronauts.  When the party asked about other regions in the world, Tatiana warned them not to travel south out of the mountains, for the God Emperor Razoul controlled those lands.

To further this new quest to build a spaceship, the party would need scientists.  Tatiana revealed that the source of many of the weird local enchantments, the Emerald Enchanter, was also a scientist, and perhaps he could reveal some clues for spacecraft design.

The party then went shopping so that they would be prepared for the next portion of their quest...

So what did we all learn from this?

"Check this cape out bro!" - the Wize Wizard McBride offers his fancy beaver cape to HandFoot the Alien, in exchange for a truce.