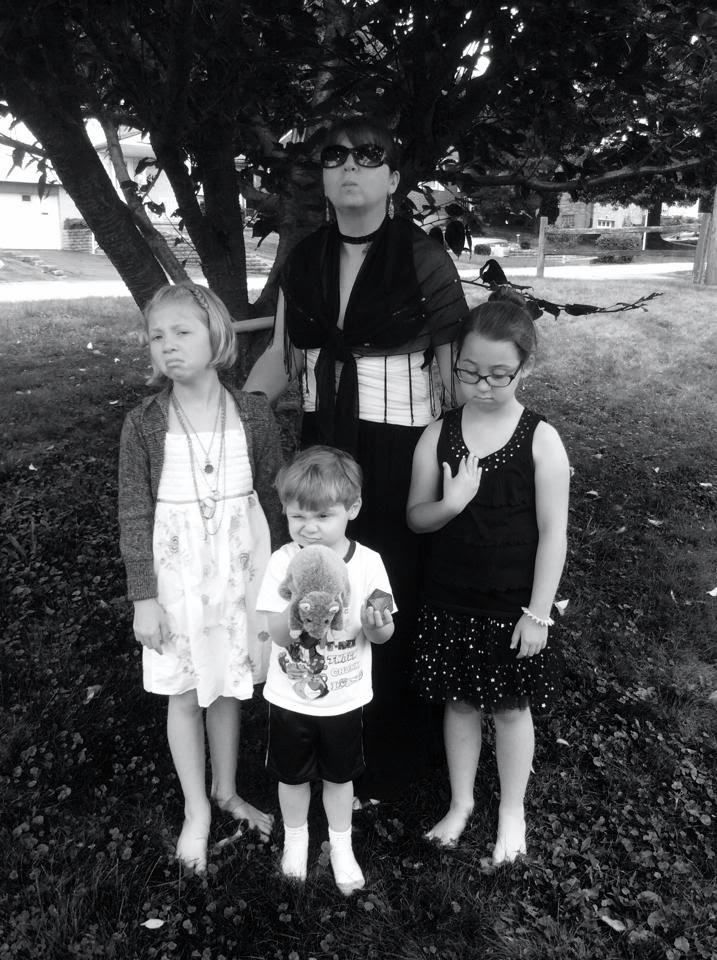 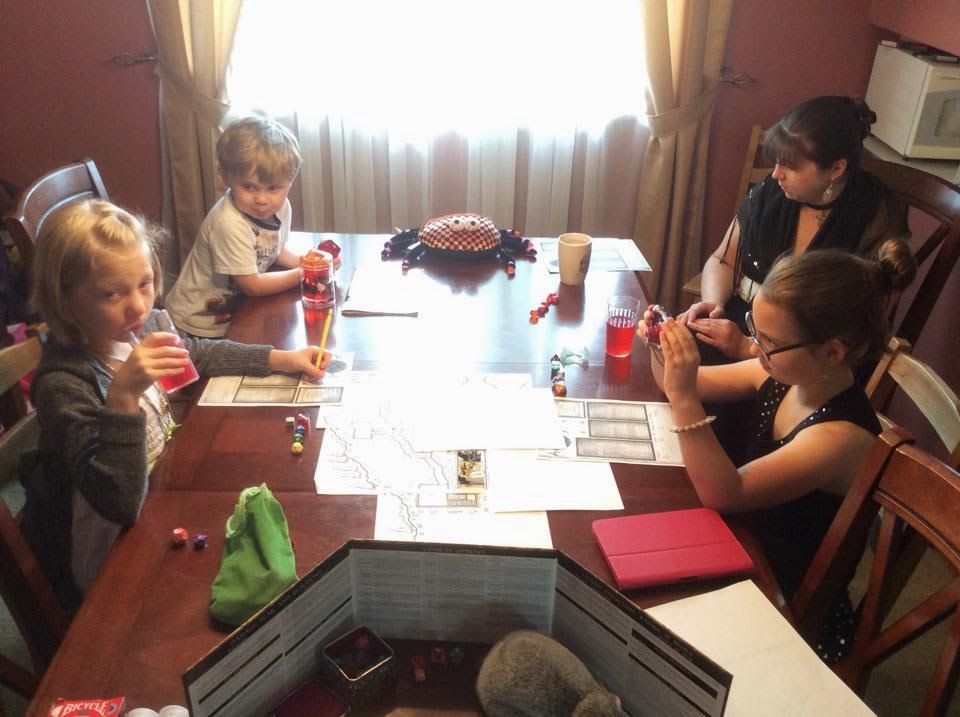 Ahead of the Avernus family was a locked door.  The trio plus one (can't count out Rudolpho, no longer an NPC) worked out their lockpicking plan, and Annaria and Adelaide put their undead noggins together so that they could enter the chamber ahead.  Once through, the party found themselves in a large chamber with a raised dais and alter in the center.  On top of the alter, embedded in a small notch, was a beautiful ring.  Avarice recognized the jewelry as her enchanted engagement ring, given to her by her missing husband Alistair.  The mummy matriarch was filled with emotion as she saw the ring, but as her eyes moved upwards, she saw that the women were not alone.

Hanging from the ceiling was a massive spider, hissing from it's horrific mouth, and with venom dripping from four terrible fangs.  It was the demon-spider Arachnis!  Slowly the spider lowered itself to the floor and demanded that the party tell them why they were in her lair.  Annaria, the most positive and upbeat vampire-touched scout you'd ever meet, tried to put a positive spin on the encounter, asking Arachnis to just hand over the ring peacefully.  The demon-spider turned this down immediately, and demanded that the Avernus family leave her presence.  Although she admitted that she was not interested in devouring a trio of undead, she threatened Rudolpho's continued existence several times.  Avarice tried one last time to reason with Arachnis, offering to pay the spider for the ring, but was pushed off one last time and threatened with death.

"Come get some," Avarice growled. 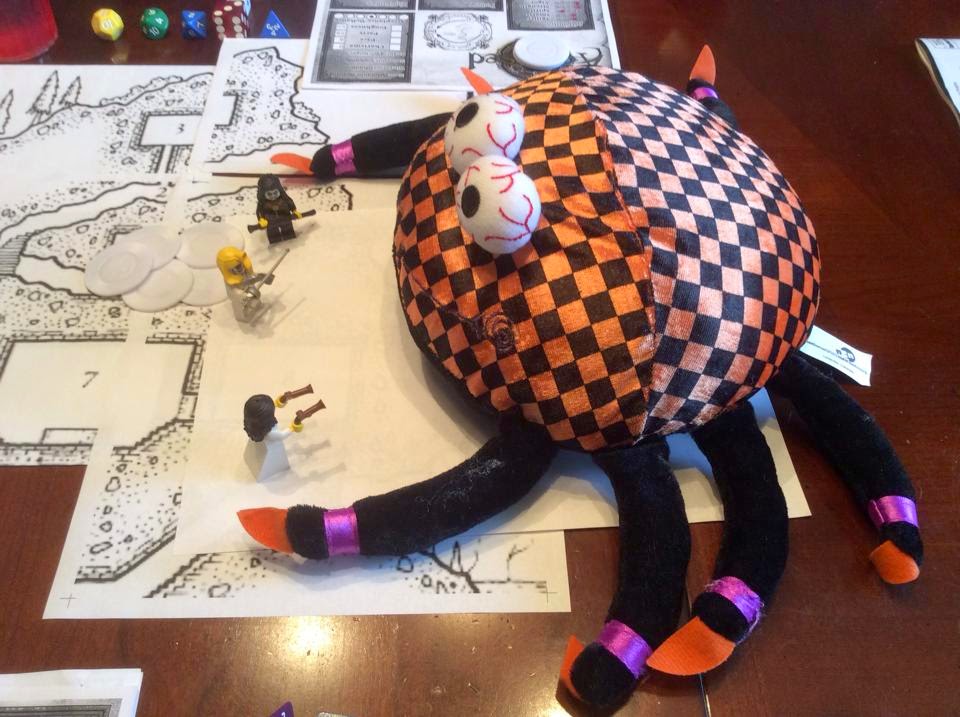 Annaria was the first to jump into action, very quickly and quietly melting away from the demon-spider's field of view before climbing a wall so that she was just perched to launch herself on the monstrous beast.  Knowing that her sister was preparing for a special attack, Adelaide pulled out her component bag and crafted a spell that stunned Arachnis with a blast of positive energy.  As the spider reeled back, Avarice converted her sarcophagus armor into a bladed wagon and slid herself under Arachnis chopping off a pair of her legs.  Rudolpho entered combat behind the mummy as well, using his prehensile tail to rip one of the legs off of the demon-spider.

With Arachnis still in shock, trying to regain her senses, the Avernus family continued their assault.  Adelaide fired her pistols at the beast, Avarice slashed with her two blades, and Rudolpho turned into a boxer using his tiny fists to pound away at the demon-spider's body.  But it would be quick thinking Annaria who would create the biggest distraction, dropping down onto Arachnis' huge body and using her bar of soap to blind the creature.  With all eight eyes stinging, Arachnis started to think about escaping the scene entirely. 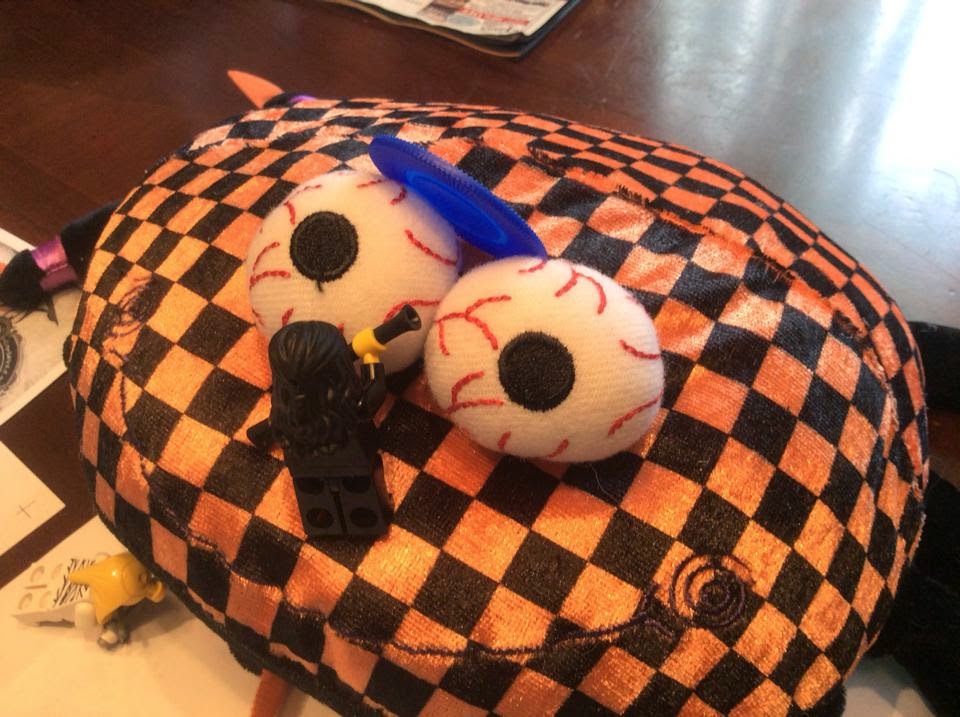 Avarice tried to get her girls to press the attack, but before any of them could land a finishing blow Arachnis pulled back into another chamber.  The trio plus one followed the giant spider into a perfectly square room with a giant spiral staircase descending into the floor, but before they could react Arachnis closed a doorway at the top of the stairs.  The route was completely blocked, and if they had not seen the portal close the Avernus family would not have realized there was a door in the floor at all.  Quickly Avarice grabbed her ring and put it on, giving her a mastery over all abilities related to her spirit.  Their adventure could've ended there, however the Avernus family still wanted to settle their score with Arachnis.

Luckily for the group, Adelaide had her shade power to become incorporeal.  The youngest Avernus family member lowered herself into the floor to look for a latch or lever to operate the door.  Unable to find one, Adelaide crafted a spell to increase her strength by an incredible factor.  Annaria and Avarice were incredibly surprised to see little Adelaide lift the giant stone slab and push it aside, opening a path to the depths of the dark caves below.

At the bottom of the stairwell the party found themselves in a large, open cavern and Arachnis was there regenerating in a pool of fetid water.  Arachnis cursed the Avernus family, and demanded again the they leave.  Avarice and Adelaide were ready to strike down the foul beast that had terrorized the lands surrounding Augsing when Annaria just smiled and called out to Arachnis:

"We can be buddies!"

Annaria asked her mother to let Arachnis work for the Avernus family at Muridae Manor.  Not one to tell her children "no," Avarice turned to the spider and demanded that she lay down her… fangs… and submit to her new undead overlords.  Surprisingly Arachnis agreed to this, knowing that her only other option was death.  All three members of the family, plus one cranium rat, high five'd each other and led their new housekeeper back to the Avernus family estate in Augsing. 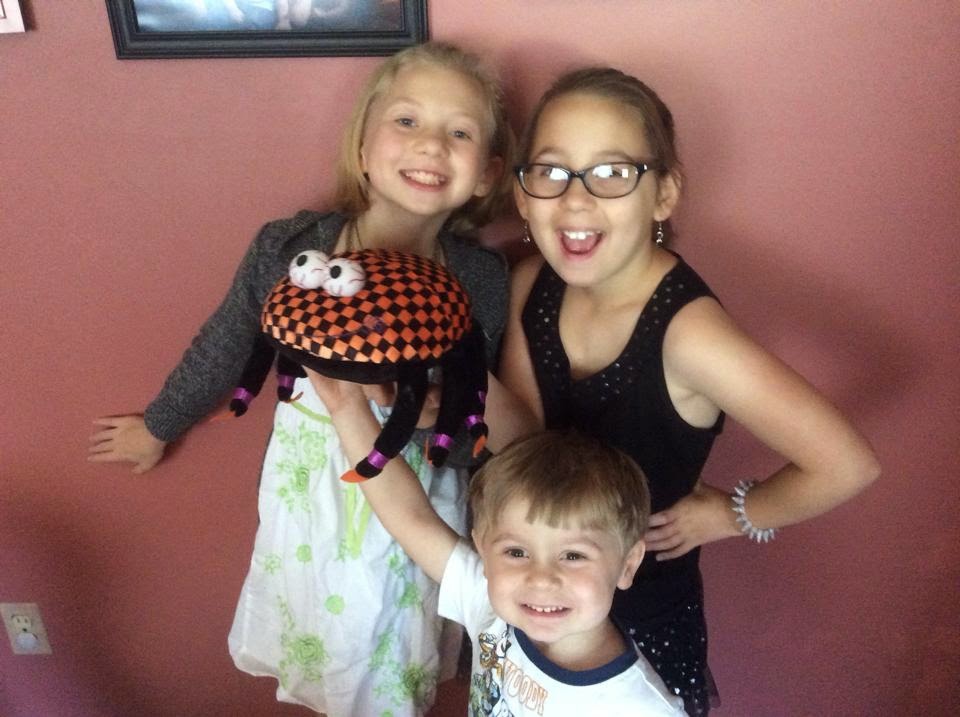 "I want the blood!" - Carrie was pretty excited that Mommy was serving red juice that we were calling "blood" through the adventure.

"Mommy, you are just like a 'rescue bot' on Transformers!" - Cooper's take on Mommy's transformation into a blade wielding wagon.

"If you step out of line, we will have to kill you… but as long as you don't kill any of Mr. Rudolpho's friends, we'll be cool." - Avarice Avernus, with the help of her two daughters, talks Arachnis into being the party's new housekeeper. 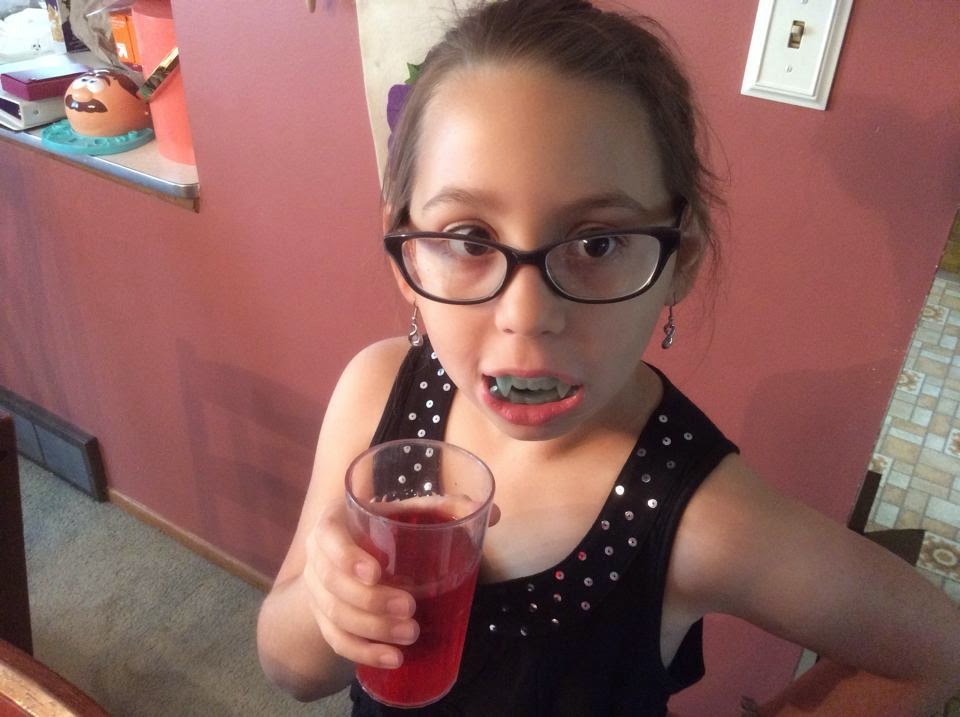 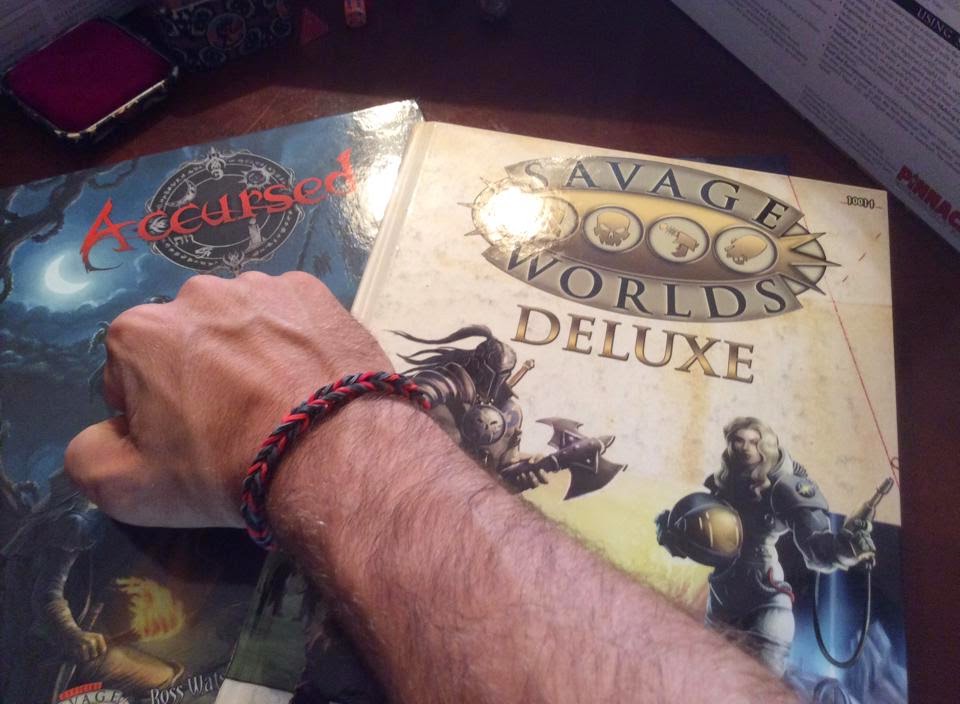 I have to thank my amazing daughter Carrie for crafting a special Rainbow Loom wristband for me while I was gone at Gen Con 2014 this past week.  Knowing that the three colors on the Accursed book were red, black, and grey, Carrie made me my very own Witchmarked Wristband!  I wore it during the game today, and will be certain to wear it often!

We're continuing to use Glynn Seal's amazing map from MonkeyBlood Design.  Please go check out his work at his website! Finally, if you haven't had a chance to check out Accursed yet, please make sure to give the game a look at www.accursedrpg.com!  You mean you haven't done this already!?!? 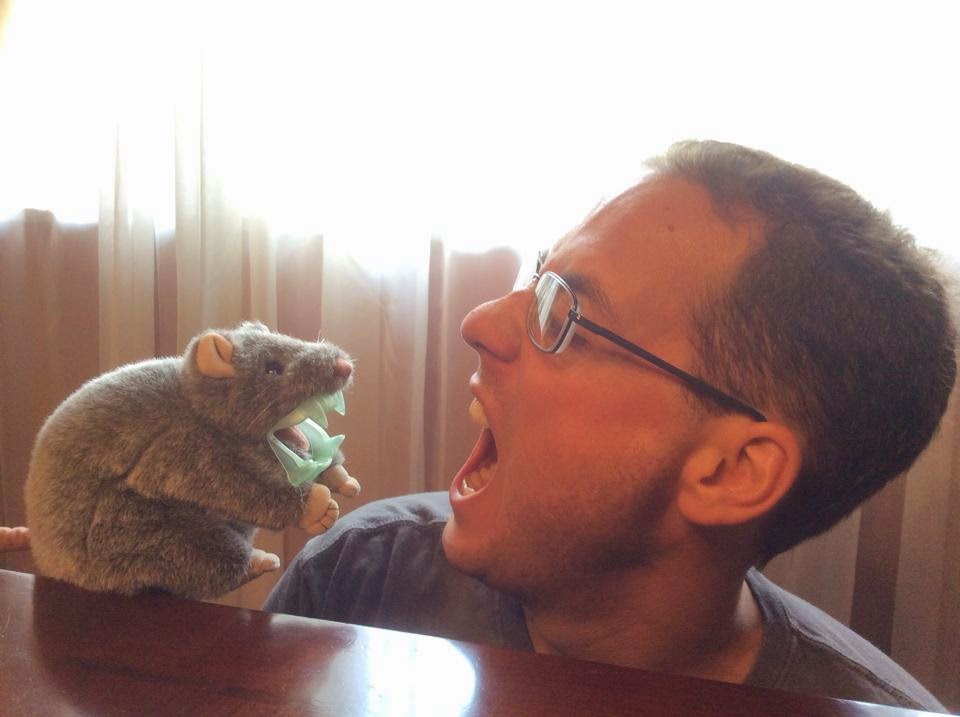