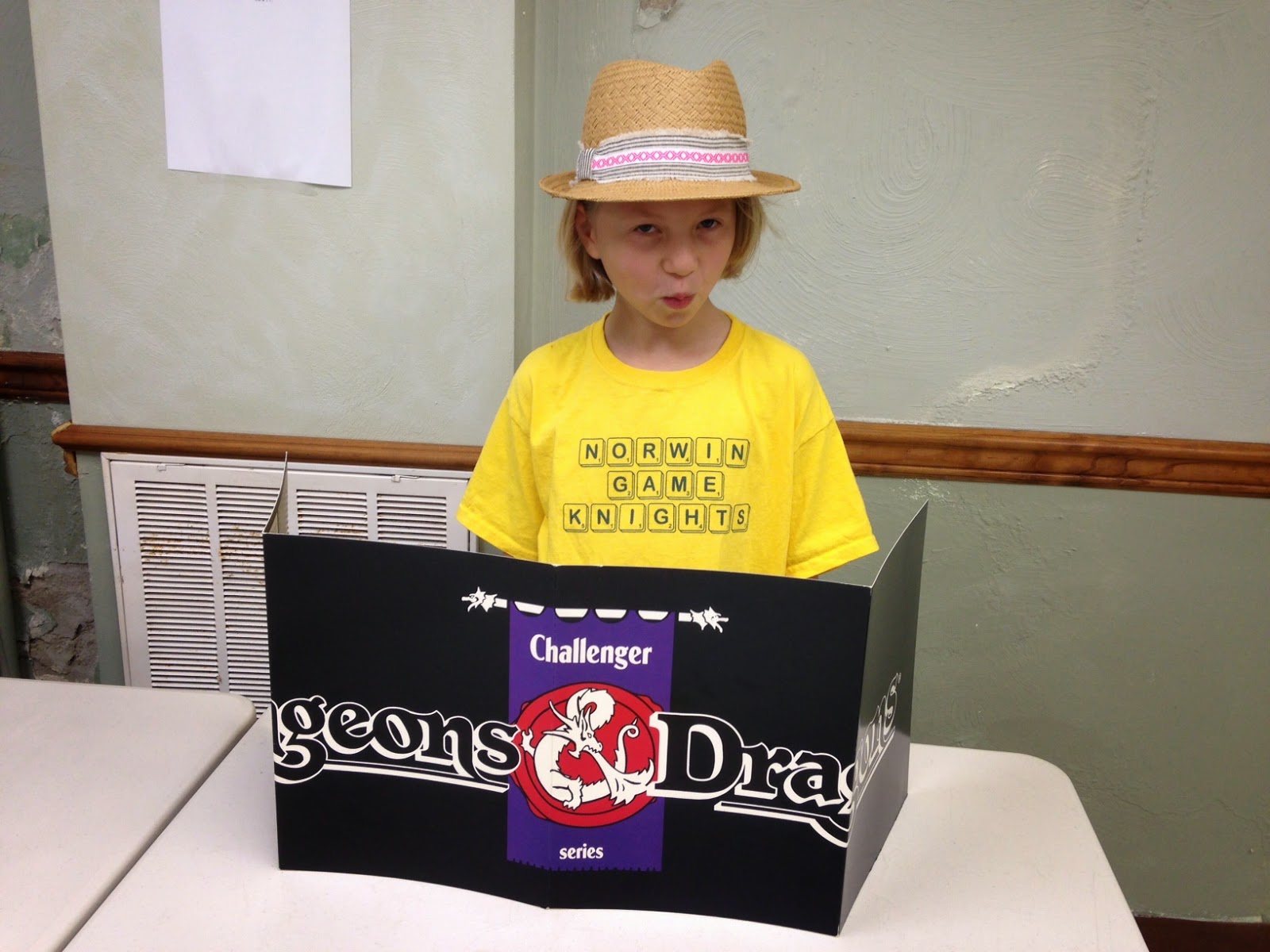 There are those moments in a parent's life that they will never forget.  First steps across a living room floor.  First time they go to school.  First vacation to Disney World.  If you are a geek dad, like me, there is one more of these important "firsts" in your child's life that you will treasure forever:

First time behind the Game Master's Screen on their own!

If you are a regular reader of this blog you know that, along with my family, I run a local game club called the Norwin Game Knights.  We have board games, card games, dominoes, and all sorts of tabletop fun at our events, but there are quite a few of us who are avid role-players, including many kids.  That being said, even though we never have a shortage of players it's been a challenge to find folks willing to game master events.  It was especially difficult this week, because I wanted to play.  Bad!  My pal Craig, who went to Gen Con with me last week, was going to run Savage Worlds Fantasy, and to date I have never "played" Savage Worlds.  Certainly I've run the game, fairly regularly in fact, but to grab a wild die and spend some bennies, I was chomping at the bit! 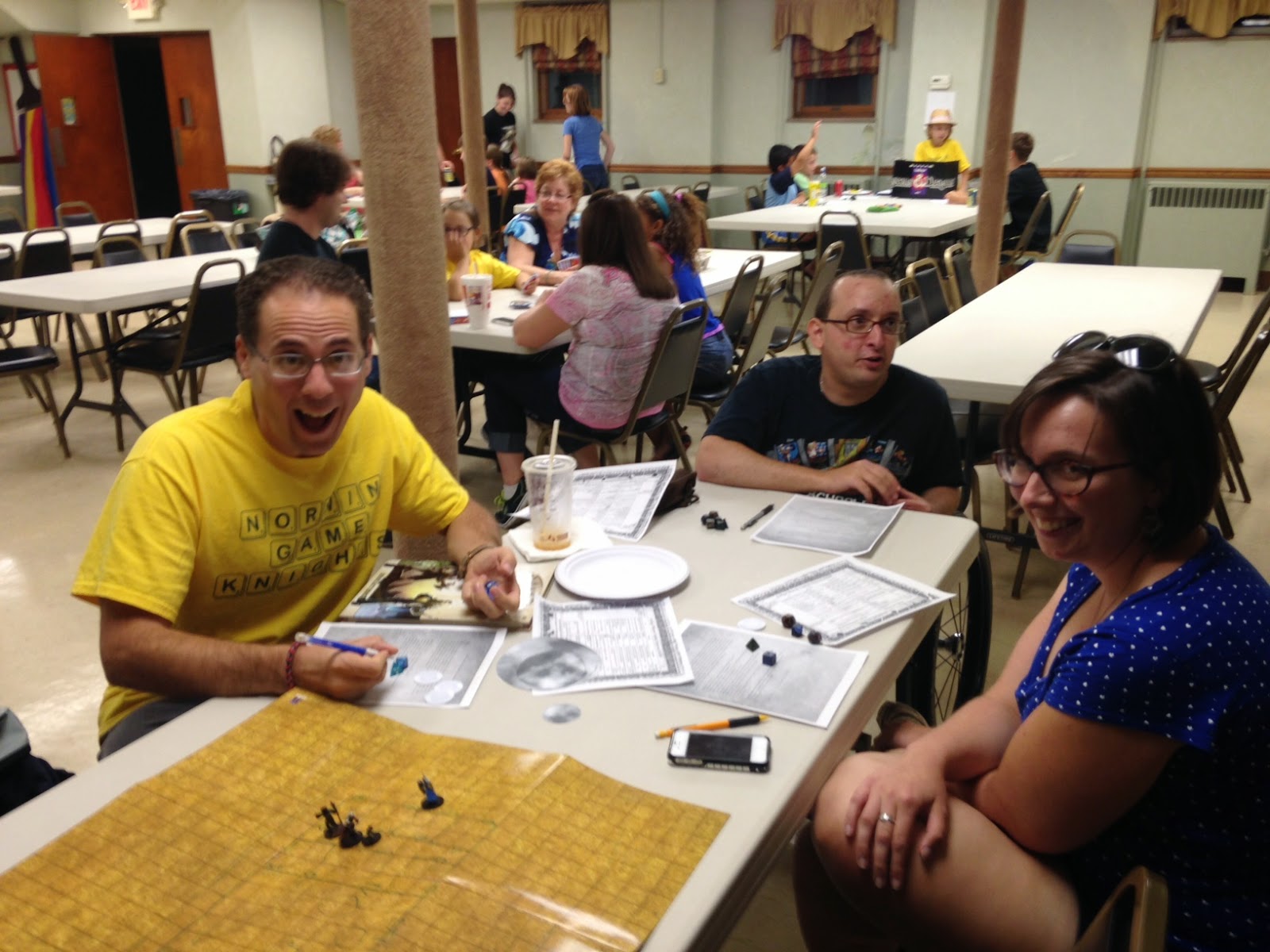 This is how I chomp at the bit!

Craig agreed to take all adults willing to play Savage Worlds (four of us in all), but we would need someone to take on the kids game.  Well Carrie, my 10 year old daughter and long-time player, stepped right up to the plate!  Grabbing her Basic Fantasy RPG core book, an OD&D clone by Chris Gonnerman, and the adventure "Fortress, Tomb, and Tower: The Glain Campaign," Carrie spent the last couple of days researching the adventure, cross-checking rules, and making sure everything was ready for her big debut.  She was a little nervous, because this time she'd be running the game… SOLO!

Technically this wouldn't be Carrie's first time behind a GM screen.  Actually there were two occasions recently when Carrie helped me run an old school Dragonlance adventure with the family:

But to run a game on her own, with very limited help (I was on the far side of the room in which she'd be GM'ing), for a quartet of loud-mouthed kids, this was a first!  And I gotta say: Carrie had a lot of guts! 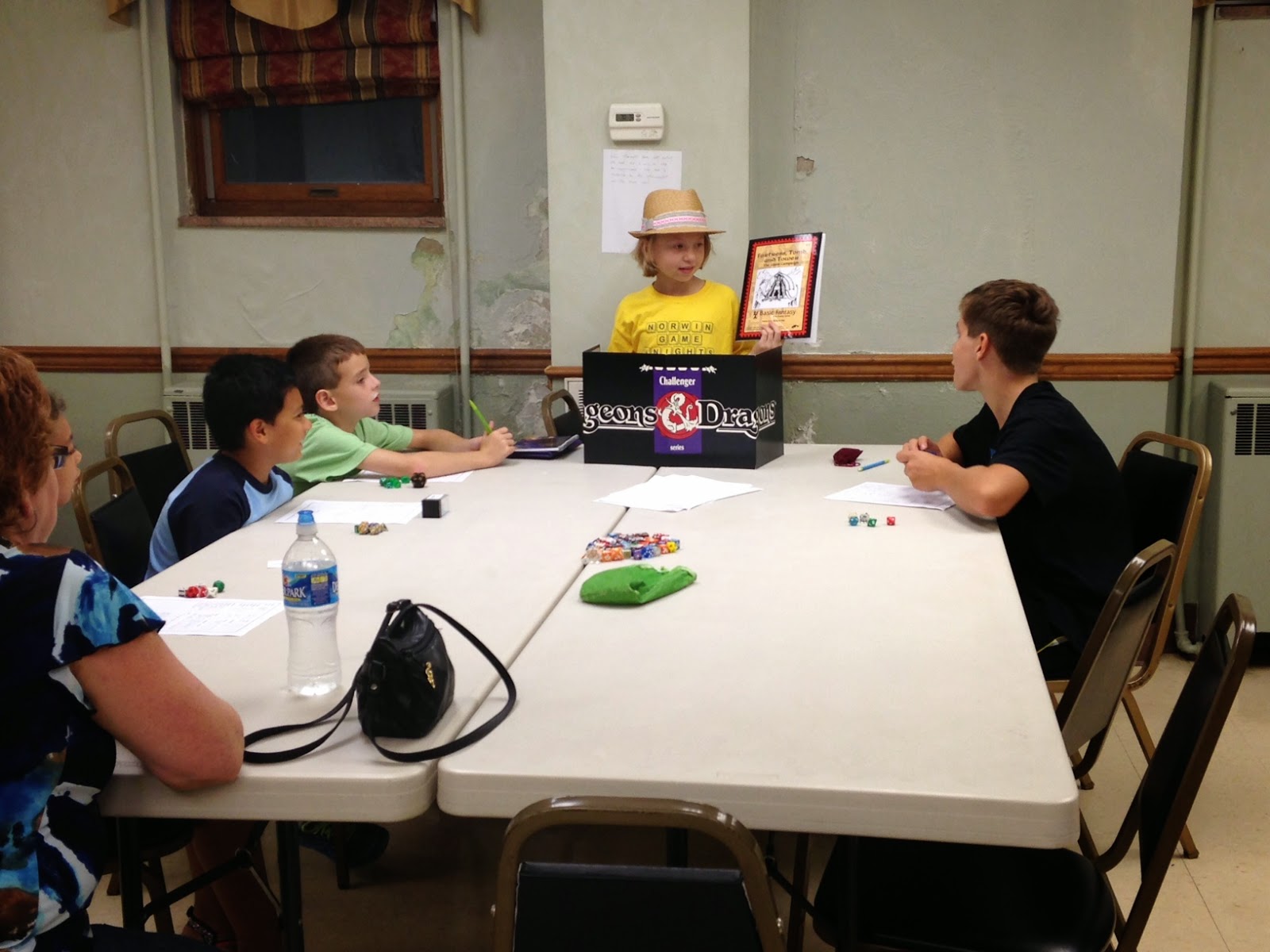 From the sounds of it Carrie did a phenomenal job!  She was able to hold the attention of 3-4 kids at any given time (they started with 4, one dropped out and another joined in later), and they finished the segment of the adventure that they started.  But I hate stealing my little girl's thunder, so I offered her the chance to tell you  all about her epic excursion into the glorious realm of game mastering herself! 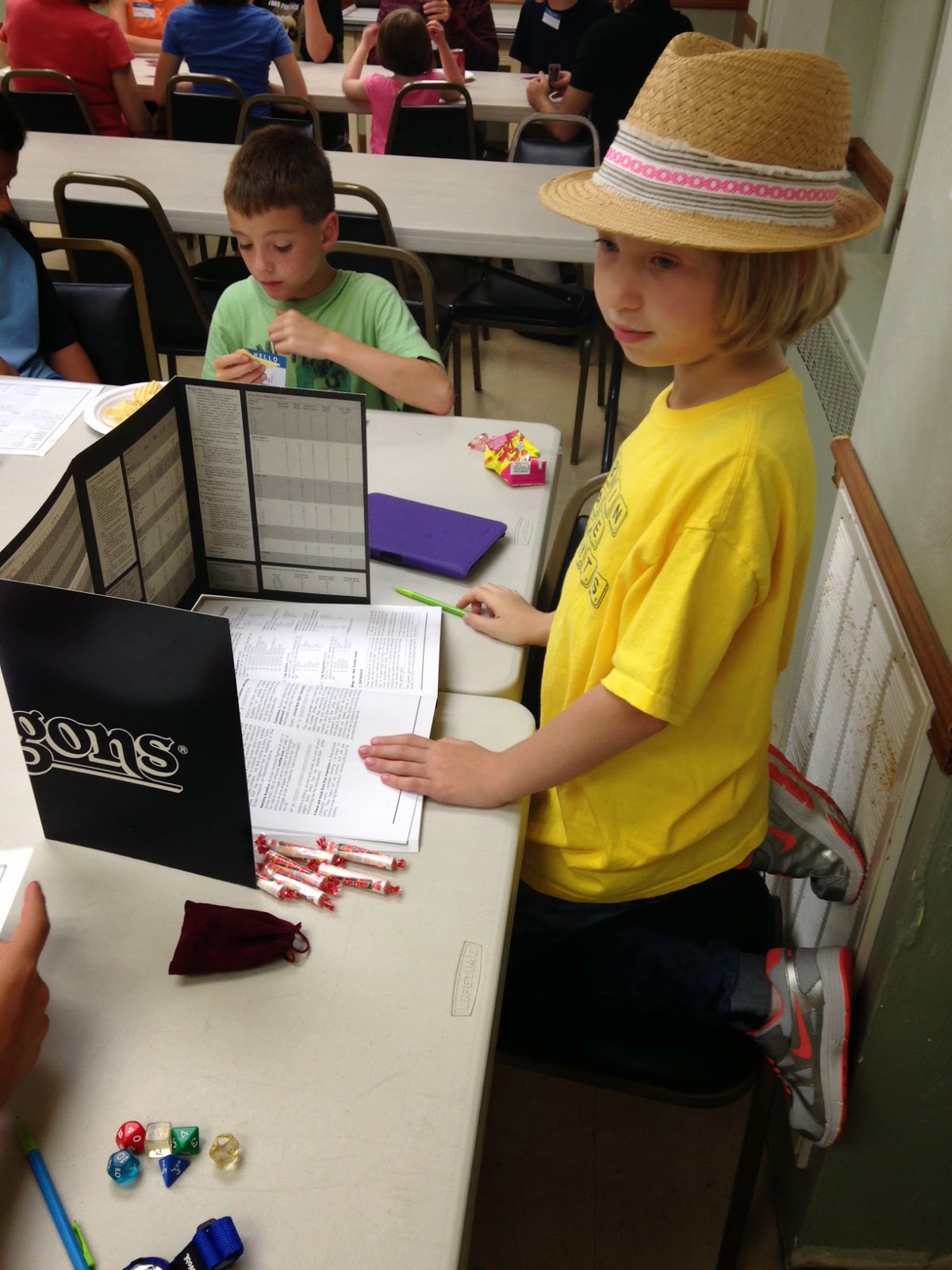 Carrie's Corner (Written by Carrie herself!) 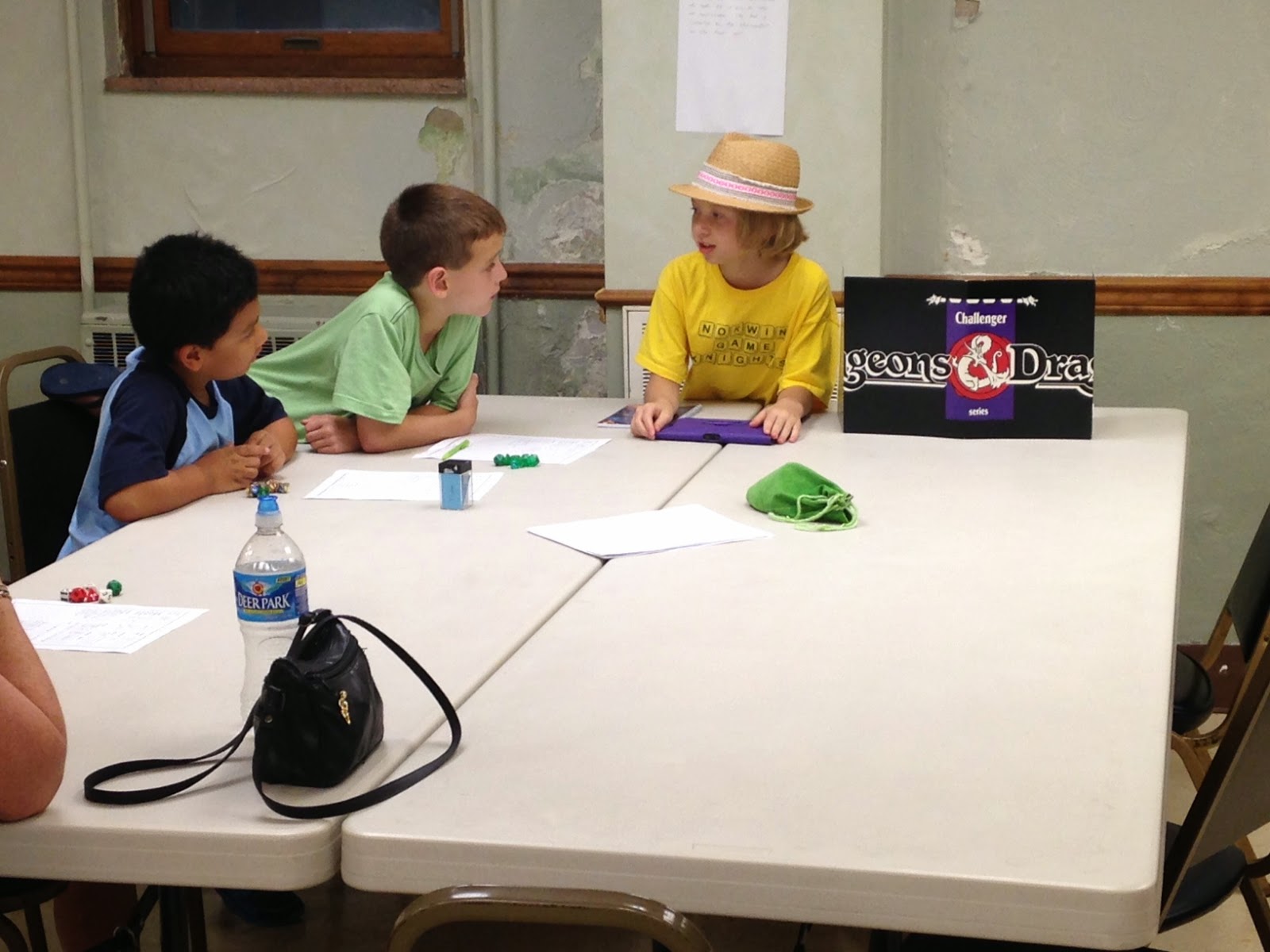 Since this was my first time GM-img by myself, I was kind of nervous, but I got over that pretty quick. They started out in front of the fortress.   There was one gate in front of them and two behind the first one. Seeing as the bars were bent, they decided to go through but, it was cover in green glowing light.  Ralph and Doraleous got through without being harmed, but poor Eric was fat (they all agreed on this.)  So he decided to suck in a ton of air, and squeeze through. Eric barely got through, but made it through safely. 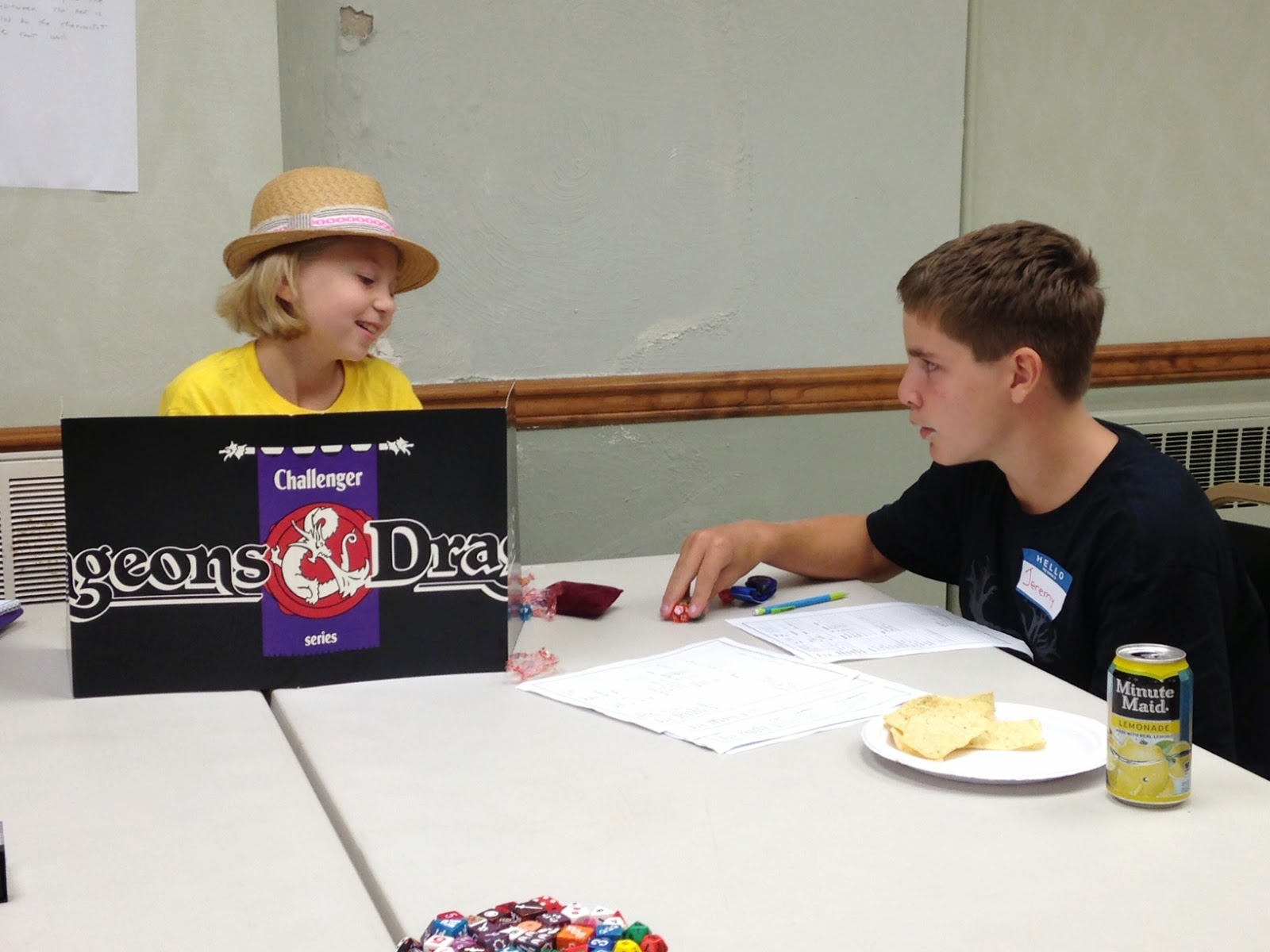 Then, they had to get through the other set of gates.  Choosing the one on the left, Ralph used his mighty strength to open the gate.  Now, they were in the first corridor.   Dylan and Jeremy said something about a trusty rock. At first I had no idea what they were talking about, but then they explained that it was a rock of trap deceiving abilities.  So Ralph threw the rock and nothing happened.  So Ralph thought it was ok.  Turns out, he fell down a 20 feet deep hole through a trap door on the ground.  Surprisingly, he survived with 3 points of damage taken away.

Ralph was now STUCK.  So Doraleous got out his rope and threw it down there and attempted to pull him up.  After several tries, Ralph decided he would climb up himself. Gladly, he was out of the hole.  Eric, being so tired, was resting aside on the wall and stumbled upon a secret door!!!!  Having nothing being in that hallway, they went out the other door at the end of the hall.  After wandering around a bit, they finally stumbled across an Anteroom with to crystal statues.  The statues seemed normal, but as they got closer, they saw that….. IT’S ALIVE!!!!!

2 Crystal Statues were about to attack!  Doraleous being swift, quicky grabbed his sword but failed.  Then came Eric!  He took out his mace and just made that thing explode!!! Having killed one, there was still one left and Ralph tried and axe swing and missed.   Now, it was the Crystal Statue’s turn.  I kind of based them on Weeping Angels form Doctor Who because it didn’t say their attacks.  So, Eric demolishing the first one, the crystal statue was mad.  He grabbed his wrist and was ready to break it.  Luckily for Eric, Doraleous took out his sword and cut the thing’s head off.  Now that that was over, they kept looking. Eric seemed a little tired so they looked for the lounge. 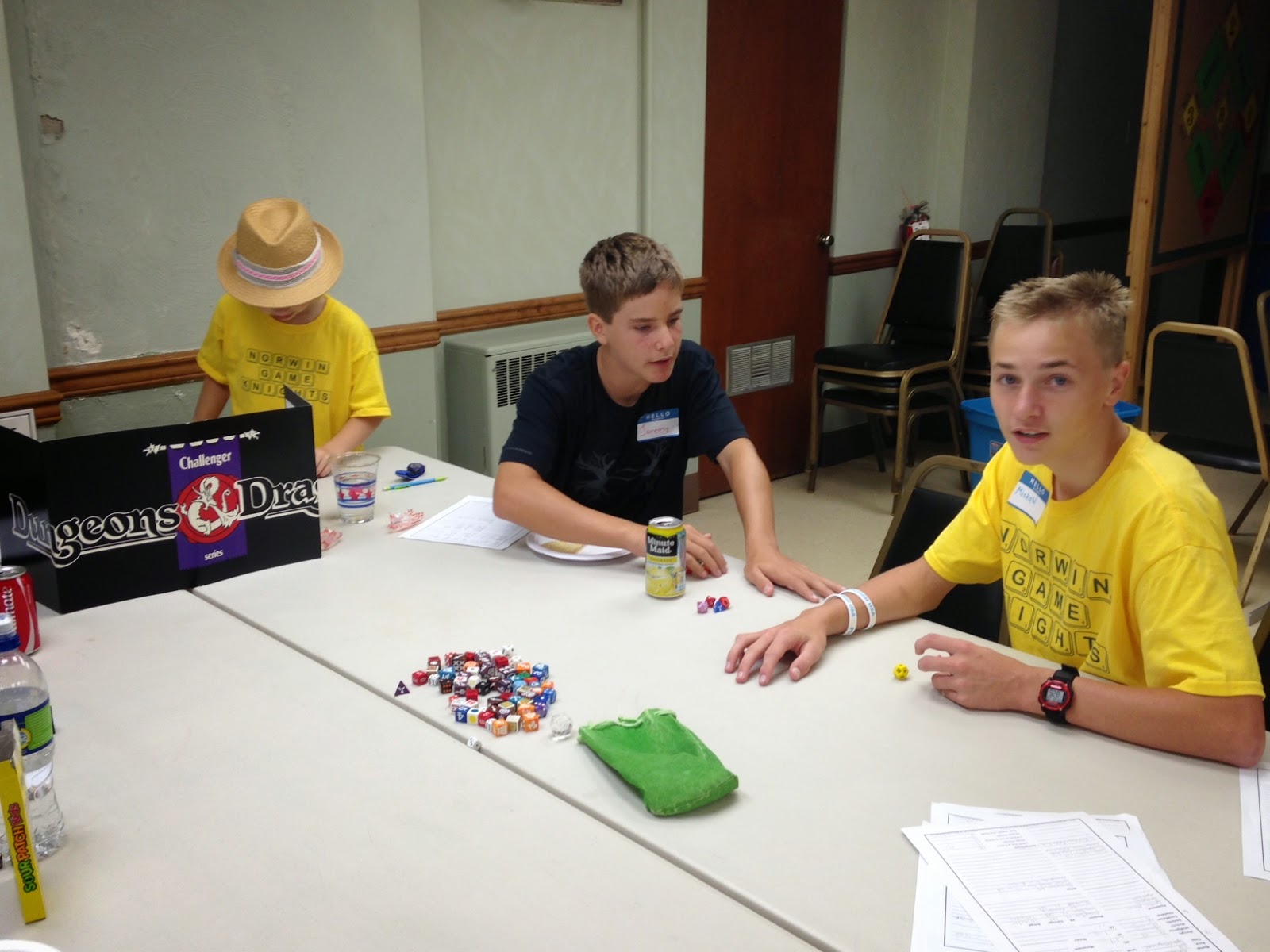 When they got there, they saw a sleeping UrGoblin. Ralph thought about taking his long sword.  He did it, but woke up the UrGoblin.  So the UrGoblin tried to punch Ralph. He failed, and Doraleous did a swing and a miss with his sword, and Eric’s wrist apparently still hurt when he hit the goblin thing.  Finally when Ralph came around he stuck his sword from the UrGoblin right in his head!!!!!  When they finally got upstairs, they came across what looked like Kyleene and Vadarin as statues with an giant emerald underneath them.  They heard a voice inside the emerald saying something a Ralph took it and then they saw tons of chests on money and jewels galore!!!!!  I asked Jeremy to add it up at the end and it looks like they got 13,500 gps!!!!  After a little more looking though, they found the Duke’s bedroom with an emerald holder.   Ralph stuck the emerald in and the holder rose up and shined with a yellow glow.  The emerald then said, “ NO!!!!! YOU BETRAYED ME HOW COULD YOU!!!!!??????” And they did it! They won the adventure!