The Strange - Dingo and the Cosmos - Session 1 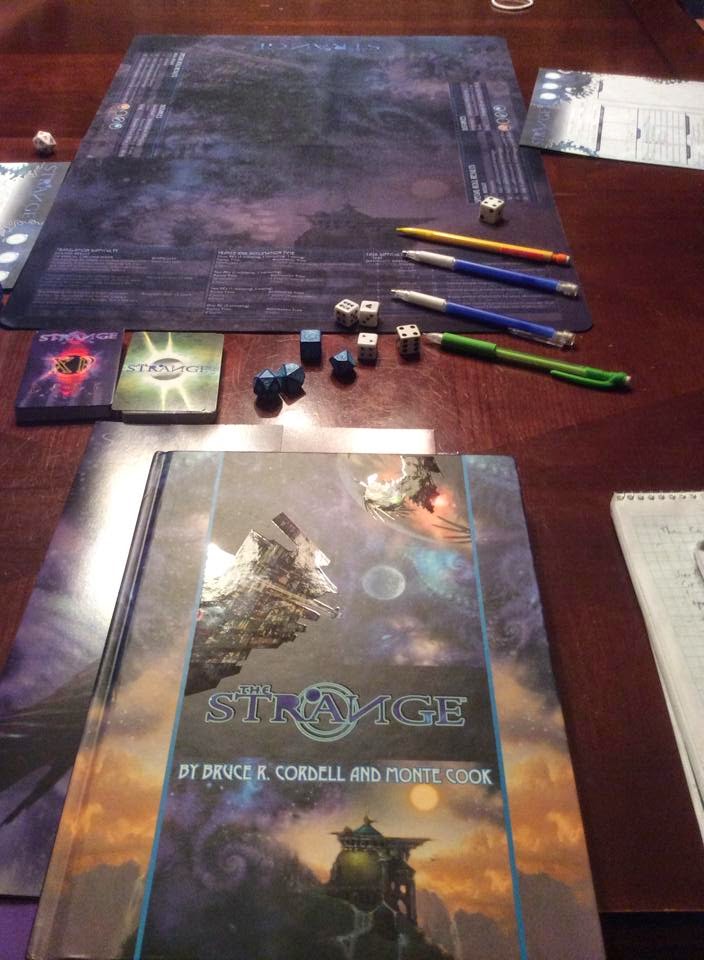 
It's late August, Monte Cook Games' The Strange released just a couple of weeks ago and here I am, already a "veteran" of the game talking about some "inaugural" session.  While many gamers are just now cracking open their books and creating sly and cunning agents of The Estate, I've had the pleasure of being a playtester for The Strange, and have been exploring the Dark Energy Network regularly since last December.  A little over a week ago at Gen Con I ran a pair of terrific sessions, introducing nearly a dozen players to the setting and the Cypher System.  But while all of these playtest sessions and one-shot convention games have been incredible, tonight was the first time that I was able to play The Strange at my favorite game table, with my favorite people.  So for me, tonight felt like my first "official" game with Bruce Cordell and Monte Cook's marvelous new game.

So being a first session for my gamer family, we had to spend a lot of time getting ready.  My daughters love playing dress-up, and when given the opportunity to do a little "secret agent kid" cosplay, Carrie and Evie jumped at the chance.  Earlier this morning we finished their characters, and my wife's as well, so we had an idea of what each future agent of The Estate looked like, and how they handled challenges.  It was fun listening to them rustle about their room for clothes, jackets, sports gear, and one very hard to find magnifying glass, and Carrie was thrilled that I let her borrow our Apple TV remote to use as a cypher.

The results were right on target! 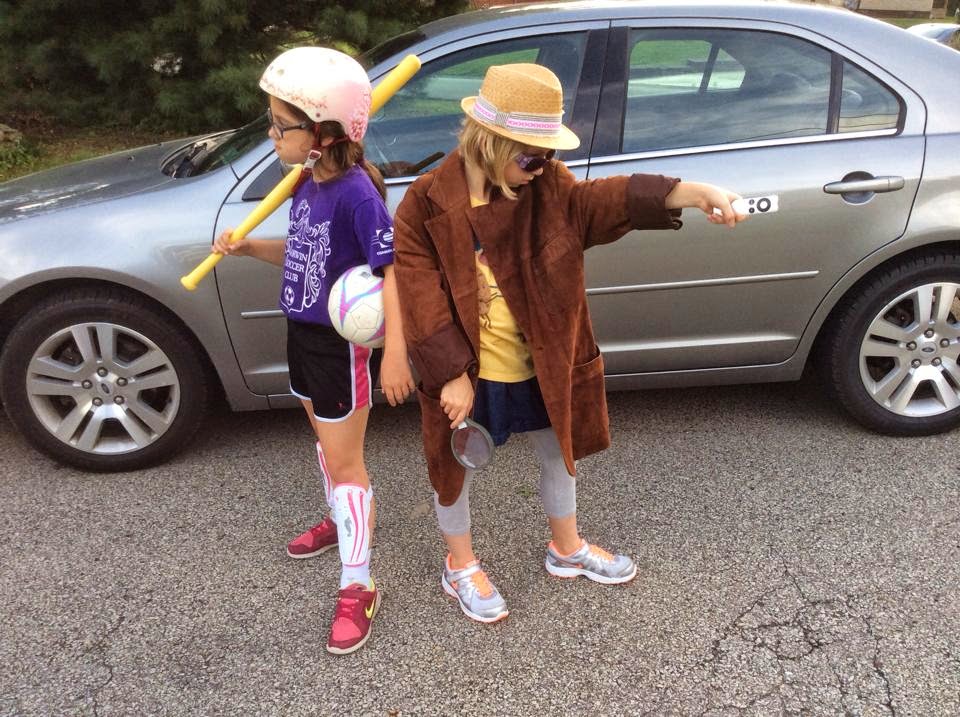 To make the evening even more special, my wife's cousin Sean dropped by.  Sean was an old veteran of my Eberron an Deadlands campaigns years ago, and when he showed up for dinner he offered to sit in on our very first game.  It had been at least a year since he rolled the twenty-siders before, and was completely new to the Cypher System, so I'd have the chance to show off the rules to a newbie again!


Arianna Cosmo - A Graceful Vector who Looks for Trouble 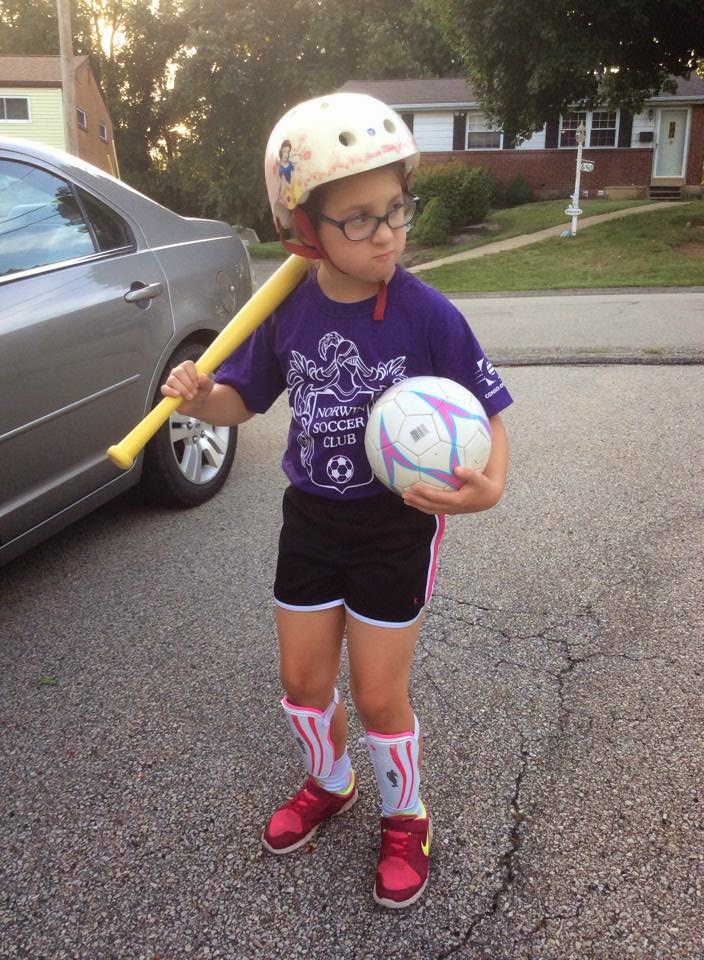 Ms. Arianna Cosmo is a middle-school student who lives in suburban Pittsburgh.  Physically adept, and highly skilled at sports, Arianna excels in soccer, soft ball, dodge ball, and dance.  Her exceptional skills have earned her a special scholarship to a "special private school" located in Vermont and funded by an organization called The September Project Foundation.  Arianna is the biological daughter of John and Wendy Cosmo, owners of Cosmo's Pizza in downtown Irwin.  John and Wendy pushed Arianna to apply for the scholarship, and have insisted that she leave home at the end of the summer to go to the private school.


Crystal Cosmo - A Strange Paradox who Works the System 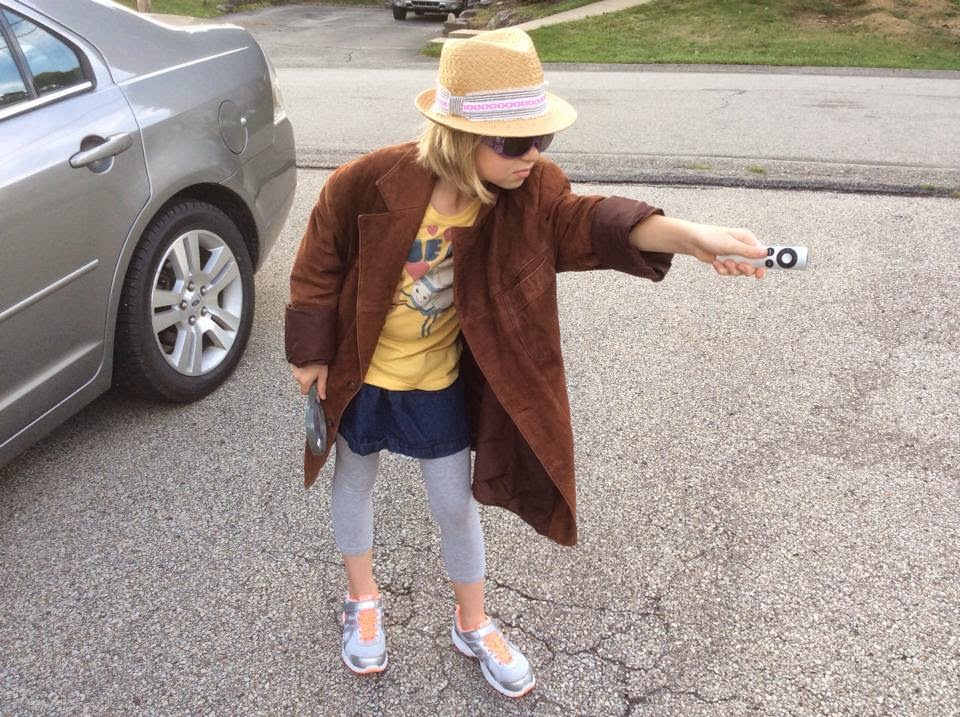 An orphan with amnesia, Ms. Crystal Cosmo is the adopted daughter of John and Wendy Cosmo.  Having no specific recollections of her life with the exception of the last six months, Crystal mysteriously possesses incredible knowledge and understanding for her age.  Investigations show that Crystal is highly proficient in the sciences, and has a working knowledge of the Strange.  Crystal has reportedly experienced wondrous dreams and terrible nightmares of a place full of strange machinery and biomechanical organisms. She is a "person of interest" within The Estate.

Ms. Jackie Dingo is an agent of The Estate currently assigned to the Pittsburgh area.  Working undercover as a local librarian, Ms. Dingo's current assignment is to seek out and observe a pair of children.  One has been on the Estate watch list for some time and is suspected to be a native of Ruk.  The other appeared only a couple days ago, and is being actively watched by agents of the September Project.  The second child is most likely not native to Earth.  Ms. Dingo was specially selected for this mission as she herself is a Qephilim.


Teddy Horton - A Sharp-Eyed Vector who is Licensed to Carry

Supposedly an heir to the Tim Horton's family, Mr. Theodore Horton is a Canadian who opened a bar and restaurant along Route 30 in Pennsylvania just before his inheritance ran out.  After discovering that he was Quickened, Teddy was recruited by The Estate, given a gun, and paired up with Ms. Jackie Dingo.  Teddy has been given three corrective actions while in service to The Estate, his next to lead to a three-day suspension. 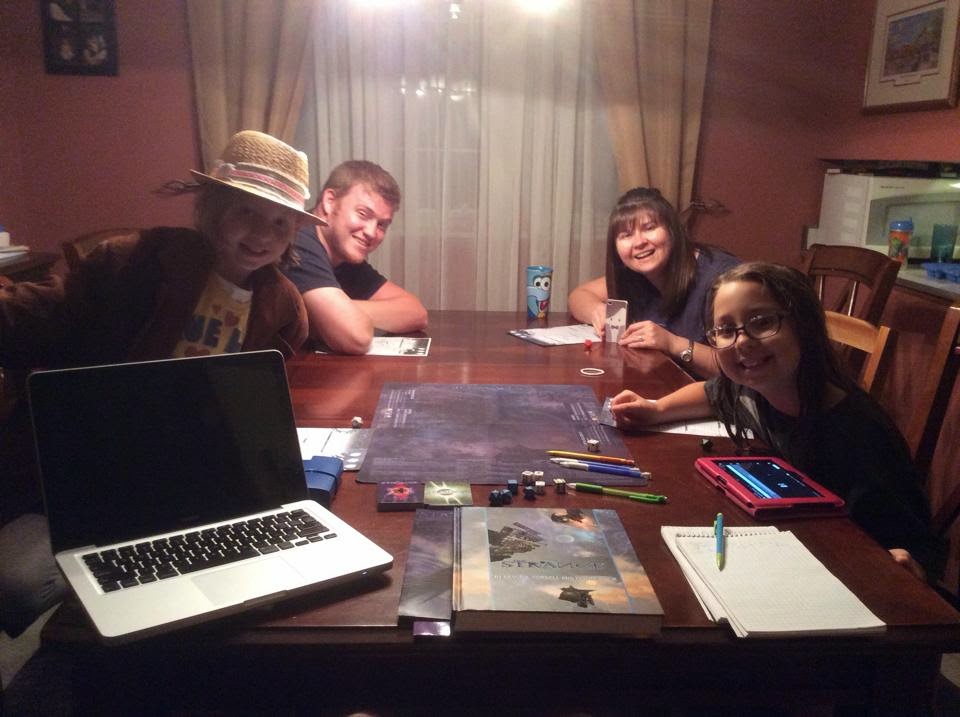 Estate Agents Dingo and Horton were on a stakeout across the street from a local suburban Pittsburgh middle-school.  They were observing three things at the school's playground: a local child named Crystal Cosmo, a second child lurking near the playground, and a silver impala with a pair of suspicious individuals observing the children as well.  Agents Dingo and Horton had been watching the first girl, Crystal, for the past few months, but the other girl was new to the area.  Given their distance to the other vehicle, Dingo and Horton were not sure who in the schoolyard the suspicious individuals were observing.

Arianna and Crystal Cosmo had a better look at the "new kid," though.  From across the schoolyard it seemed like the little girl, possibly eight or nine years old, was dressed as if she were headed for a renaissance festival.  She wore leather tunic and an old-fashioned floral dress.  A ring of alien flowers adorned her head, however her hair was tussled and caked with grass and debris as if she were sleeping on the ground at night.  The Cosmo girls started to approach the girl, but didn't make it before local school bully Chip started picking on the poor child.  Mocking her dress and appearance, Chip started to make the new kid cry, which made both Arianna and Crystal furious.  Both of the girls jumped to the new kid's defense, but couldn't get Chip to back down.  Crying hysterically, Chip's target fled the schoolyard and ran down to the soccer field.  Unable to strike back physically, Crystal tried to quickly hack the school's website with her laptop, to lash out at Chip, but got discovered by the school principal who was actively monitoring the firewall at the time. 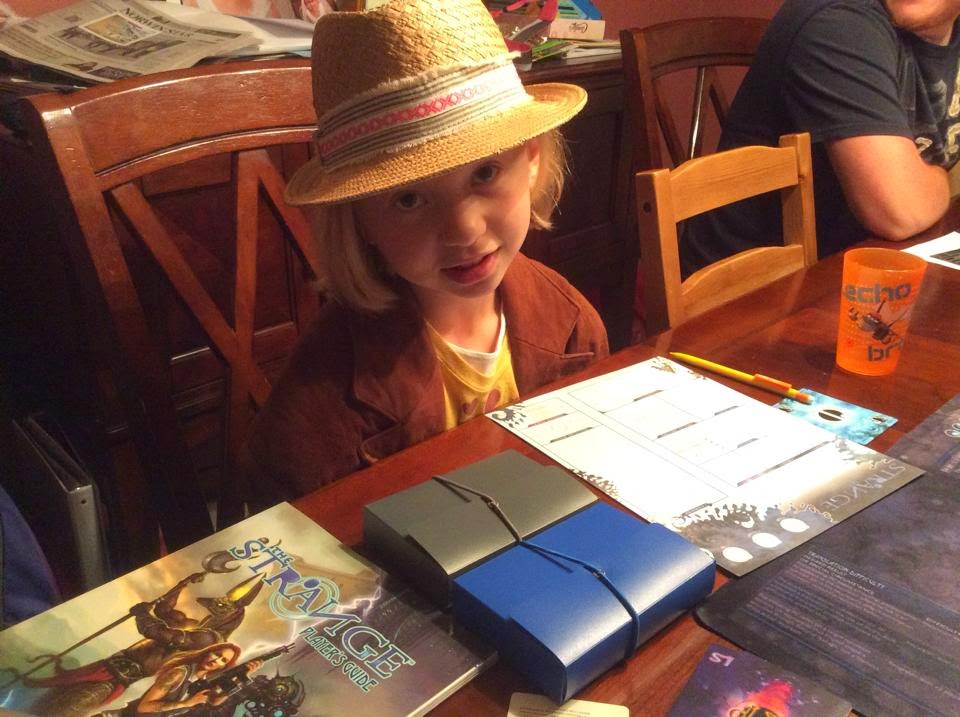 
Meanwhile, as soon as the new kid started running away from the schoolyard, Dingo and Horton watched at the two suspicious characters got out of their Impala, tasers in hand, and started jogging towards the soccer field.  The Estate agents grabbed their gear and took off in pursuit.  Assuming that their two new targets were possible rogue agents, Dingo and Horton were ready for action, but had to keep things quiet.  As soon as they caught up to the thugs, Horton pistol whipped the first one while Dingo used her whip to trip the other.  Dingo then pulled her revolver and ordered the two rogue agents to stand down.  The rogue agents turned with their tasers in hand, both firing at Dingo but missing.  Horton tried to pistol whip again but missed, throwing his pistol into the dirt like a lawn dart.  When it seemed like one of the rogue agents was going to get the drop on the sharp-eyed vector, little sporty scrapper Arianna showed up with her baseball bat.  Arianna clubbed the one enemy agent right in the stomach, knocking him out.

The Estate agents feared that they blew their cover, so Dingo tried to act as if she was a member of whatever group the rogue agents belonged to.  Even though she wasn't entirely convincing, Dingo was able to confuse the rogue agents enough so that they disengaged from their search for the now missing out-of-place girl.  Dingo ordered them to return the Cosmo girls back to the schoolyard, and then grabbed Horton so that they could continue their search.  Crystal and Arianna were not about to walk away with a couple of nefarious strangers, so they quickly slipped away and followed Dingo and Horton into the woods. 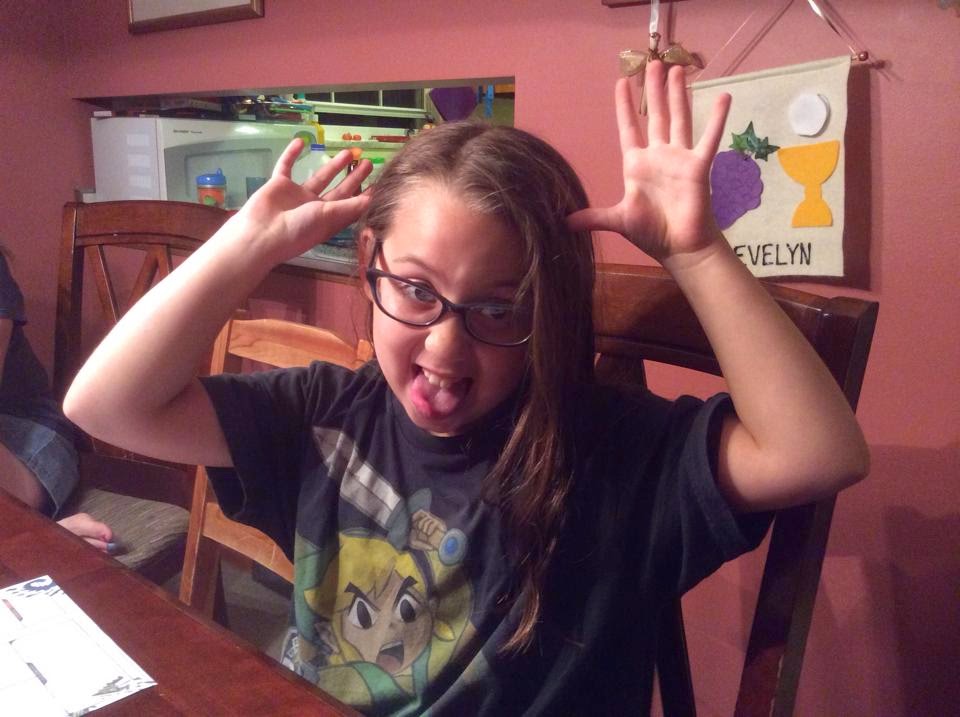 
When the four couldn't seem to find the odd girl, Arianna started calling out that she could take her "home." Immediately the young girl climbed out of the trees and to confirm what Arianna meant.  The girl told the party that her name was Anya, and that she was from Shalmarn.  Anya didn't know how she got to this "weird place full of machines that move," but she wanted desperately to go home.  Neither Crystal nor Arianna knew where Shalmarn was, but Agent Dingo sure did.  Shalmarn was a long ways away, located on the recursion of Ardeyn.  And if this girl, Anya, came to earth dressed in the traditional garb of her home, that meant that an inapposite gate was nearby… which was bad news indeed.

"He bro, what are you doin' to that girl?" - Arianna shouts at Chip the Bully during his encounter with little Anya.

"Yeesh!  M.I.B.!" - Sean exclaimed when he heard that the rogue agents didn't have fingerprints.

"What part of 'low profile' do you both not understand?" - Jackie shouts at the two rogue agents, pretending to be a superior agent on their side while not knowing what side they were on.

"Believe me, that part's going in the report." - Teddy tells Jackie, referring to Arianna's all out assault on one of the rogue agents with a kid-sized baseball bat.

Email ThisBlogThis!Share to TwitterShare to FacebookShare to Pinterest
Labels: The Strange, The Strange RPG