Jen's Pro Gen Con - An Interview with my Gamer Wife 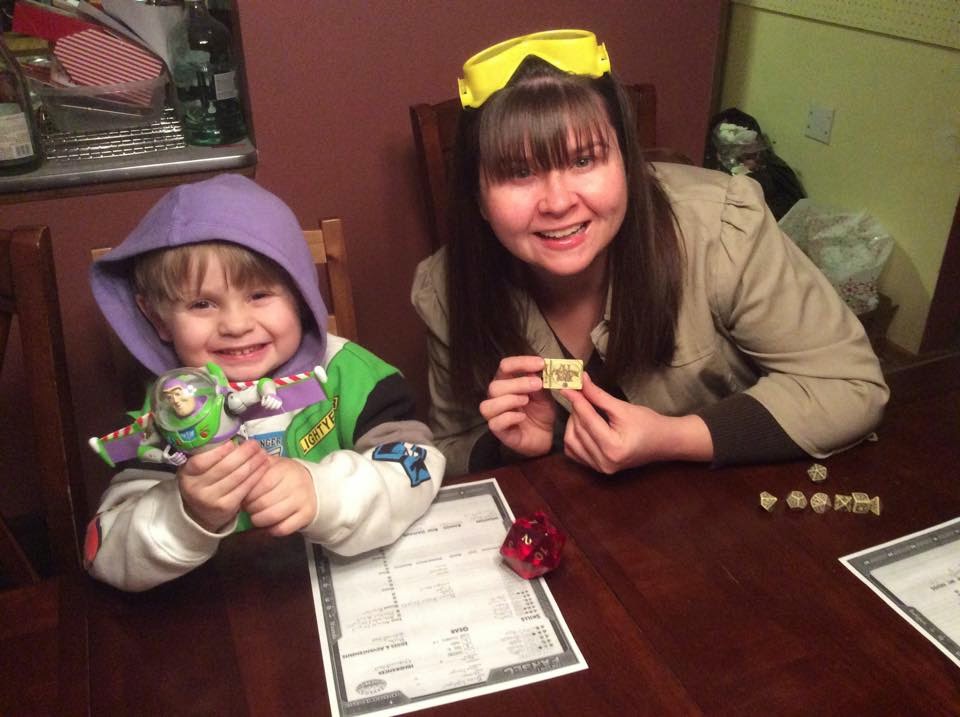 Transforming my Wife of Twelve Years into a Gamer


I started dating Jen back in August of 1997.  Those were some great years!  I was a freshman at Penn State, Matchbox 20 had just released their debut album, and Harrison Ford kicked Gary Oldman off of Air Force One.  The first time I met Jen it was an amazing whirlwind evening, as we walked all over campus talking, and finished up with coffee and cheese fries at the Ye Olde College Diner.  The next afternoon I introduced Jen to my roommate, which meant showing her my dorm room.  Despite the Council of Wyrms and Dark Sun posters, and the totally wicked, custom campaign setting map next to my bed, Jen had no idea what she was getting into with that relationship.

A year later and Jen was starting to get the idea of what a role-playing game was all about. She didn't seem interested in trying it herself, but let me play with my friends whenever I had the chance.  It took me the better part of a year to get her to a game table.  Jen joined two of my regular players, my roommate Joe and a friend who we all called "Weasel," for a little AD&D 2nd Edition.  We played on the floor of my apartment bedroom, which probably hadn't been cleaned in quite some time.  Jen was pretty freaked out.  We tried again another year later, and I made her a very special character for an AD&D 2E Dark Sun campaign.  Unfortunately she was bored out of her mind and just sat there drawing pictures on index cards.

This lovely image was her rendition of an Athasian Oasis:

But things changed as we got older and our relationship matured.  Having kids probably helped.  In 2011 I got Jen to try the D&D card game "Three Dragon Ante."  By 2012, I was running a few bedtime games of D&D Basic out of the old Rules Cyclopedia for my kids, and Jen would occasionally join as Eric the Cleric.  But at the end of 2013 something big happened:  Jen was introduced to Numenera.  The Cypher System's mechanics broke down some of Jen's "anti-RPG shield" and she began sitting in more and more often.

Now in 2015 my wife is coming to Gen Con with me in July!  I'm absolutely thrilled, and since it's almost time to pre-register for badges, I thought I'd do an interview with my wife and get some of her perspectives on our incredible hobby.

I hope you enjoy our conversation!


Jim:  Thank you so much for sitting down on the couch with me!

Jen:  Uh… thanks for having me.

Jim:  Are you ready for some pretty tough questions?

Jim:  I know that I consider you a gamer convert now, but would you consider yourself a "gamer?"

Jen:  I consider myself "one who likes to play games" but I don't know if I feel defined by it.

Jim:  So do you care that I just keep referring to you as a gamer?

Jen:  Do I care?  No you can call me anything you want to.

Jim:  Good enough.  What do you enjoy about tabletop gaming?

Jen:  I enjoy the social aspect of it.  You can invite people over to play games and it gives you a jumping off point for your evening.  You don't just have to stare at each other and think "what do I do?"

Jim:  How would you describe your first encounter with an RPG?

Jen:  Awful and forgettable at the same time.

Jen:  Well, the environmental aspect of the gaming event was probably not conducive to a first time introduction to gaming for a girl.  It was in a really gross apartment, with really gross boys.  They were probably gaming veterans and I still didn't understand the point of it all.  For me games always had a purpose, a conclusion… like a winner.  I didn't get that there wasn't a problem to be solved.  It wasn't like "Clue", it was just this open ended conversation that I didn't get.  And it smelled bad, in case I forgot to mention that it was gross in your apartment…

Jen:  … the air in that apartment was just thick.  Thick with dirt and filth.

Jen: … like I felt physically ill with it.  I felt like I had a cold from being in there so long.

Jim:  Alright, so maybe it's safe to say that you would've enjoyed the game if it weren't in my relatively unkept apartment?

Jen:  I still don't know if I would've had an awesome time with it, since it was still so foreign to me.  I just had no reference point for that kind of game.  I didn't know what "D&D" was when I met you, or what it meant to "do roleplaying."

Jim:  So between 1998 and 2012 when you finally sat down again for an RPG session with the kids, what changed about your perspective?

Jen:  I guess after living with you for "X number" of years I had a better grasp of what it was.  I always enjoyed listening to you run your games.  It also gave me a way to interject my thoughts and comments without getting dirty looks from your players.  Before I was just a weird voiceover, like the heckler whenever you were playing.  I would listen in, and always think of something funny, but I didn't have a way to really convey it.  Not that its any more welcome from me at the game table, but it seems a little more appropriate.

Jim:  When I offered to bring you into my first Numenera game, a campaign that didn't include children, why did you agree?

Jen:  Wasn't that the game with my friends?

Jim:  But you seemed to enjoy the game.

Jen:  I did, even though it devolved into sexual innuendo every five seconds.  Everything was naughty.

Jim:  Do you think that's because of the group we played with?

Jen:  Most likely, although I can't speak for all of the group members.

Jim:  Do you think it was the alcohol as well?

Jen:  Isn't that what they say?  "Loose lips sink ships?"

Jen:  I need to read this before you actually publish it.  I'm tired and have had a lot of Ibuprofen

Jim:  Okay.  But to come back to the system, what about Numenera, and the Cypher System in general, do you enjoy.  You've played over twenty sessions of Numenera and almost a dozen of The Strange.  What excites you about those particular games?

Jen:  I like the fact that it's not so one-sided.  It's less a dictatorship because I get the chance to re-roll things and I get more of a say of what happens to my character.  I play a part and events just don't happen to me arbitrarily.  Some of those other games you've had me play its like "...hey guess what.  You just got attacked by a pack of wolves and they ripped off your legs."  You can't do anything about it.  You're just Limbless Joe on the side of the road.

Jim:  So the Cypher System gives you …

Jen:  … it gives you opportunity as a player to not have bad stuff happen to you.

Jim:  Fair enough.  What are your favorite games right now?  Don't feel like you have to limit yourself to tabletop games.

Jen:  Well… my favorite tabletop game right now is probably King of Tokyo.  It's a nice quick game to play with the kids and I can play with any of them.  It's also something you can teach to new people with relative ease.

Jim:  Any other board games?

Jen:  Hmm… I mean, I always enjoy games like Rummy-O and Ticket to Ride.  But those games can be lengthy sometimes.  Even dominoes can last forever if you have a bad set of tiles.

Jim:  Going back to the RPG's, which campaign has been your favorite?

Jen:  Well, I prefer anything that I can more easily relate to.  So it's probably The Strange.  Numenera to me is a very abstract world, and with The Last Parsec I don't really "do space stuff" because I can't really relate to space.  I have trouble relating to anything fantastical because I can't visualize it or see myself as part of that world.

Jim:  But in The Strange, your character, Jackie Dingo, takes part in some fantastic adventures, how is it different?

Jim:  What about when your character in The Strange went to the fantasy world of Ardeyn?  Did you find that session to be less interesting?

Jen:  Do you mean when we went down those steps into that place?

Jen:  I visualized Phantom of the Opera, when they went down into the opera house and it was a whole other world.  I used that as a point of reference in my head.

Jen:  Well I don't like staying home while you go on a trip.  It's a chance to have a grown-up getaway while still doing the stuff we like to do.  Its just a silly-fun trip but without the responsibilities of being a parent.  It'll just be us.

Jim:  Is that a concern for you?

Jen:  No.  Bathroom lines will be shorter.

Jim:  What specific events, or types of events, are you most looking forward to?

Jen:  I'm probably most looking forward to going to the after-parties and social gatherings.  I don't really care that much about what I play.  I just want to take it all in and see what you got to see last year.

Jim:  You mentioned that you wouldn't role-play without me.  Why?

Jen:  Because I still feel very new to it all, and I don't know the systems well enough, and I don't know if anyone else would be as patient to lead me through as you would be.  And I'm not going to play in one of your games, because that would take a seat away form someone who doesn't live with you and have access to your games.

Jim:  But if there was one game at Gen Con that you absolutely wanted to try, what would it be?

Jen:  Really, any board games that look like they are quick and easy to pick up I'd like to try.  I'll have to go and look through all of the merchandise in the exhibit hall.  I'm not like you.  I don't know what's really out there.  You're a hunter, I'm a gatherer.  You are going to go looking for something in particular, while I'll just be "looking."

Jim:  Thank you so much for taking the time to meet me here on our couch.  Do you have any closing comments for our readers?

Jen:  I feel like I should say something witty.  Don't put that in there.

Jim:  Say whatever you want.

Jim:  Really?  You are gonna leave it with that?

There you have it folks.  After first saying that she wasn't going to call herself a gamer, she outed herself at the very end.  Very cool.  I'm both thrilled and honored that my wife Jen was open to trying tabletop gaming again, especially the RPG-side of the hobby.  It has certainly given us something to chat about, and another way to bond as a couple.  I'm very glad that I didn't give up trying to showcase new games in our house!

So a few questions for those of you who have read to the end!

Does your significant other, partner, or spouse take part in your gaming sessions?

Have you given up on trying to get them to the table?

Have you exposed your significant other, partner, or spouse to any "Limbless Joe" scenarios?

Let us know your experiences!