Savage Imagination - The Fusion of The Last Parsec and Disney Animation 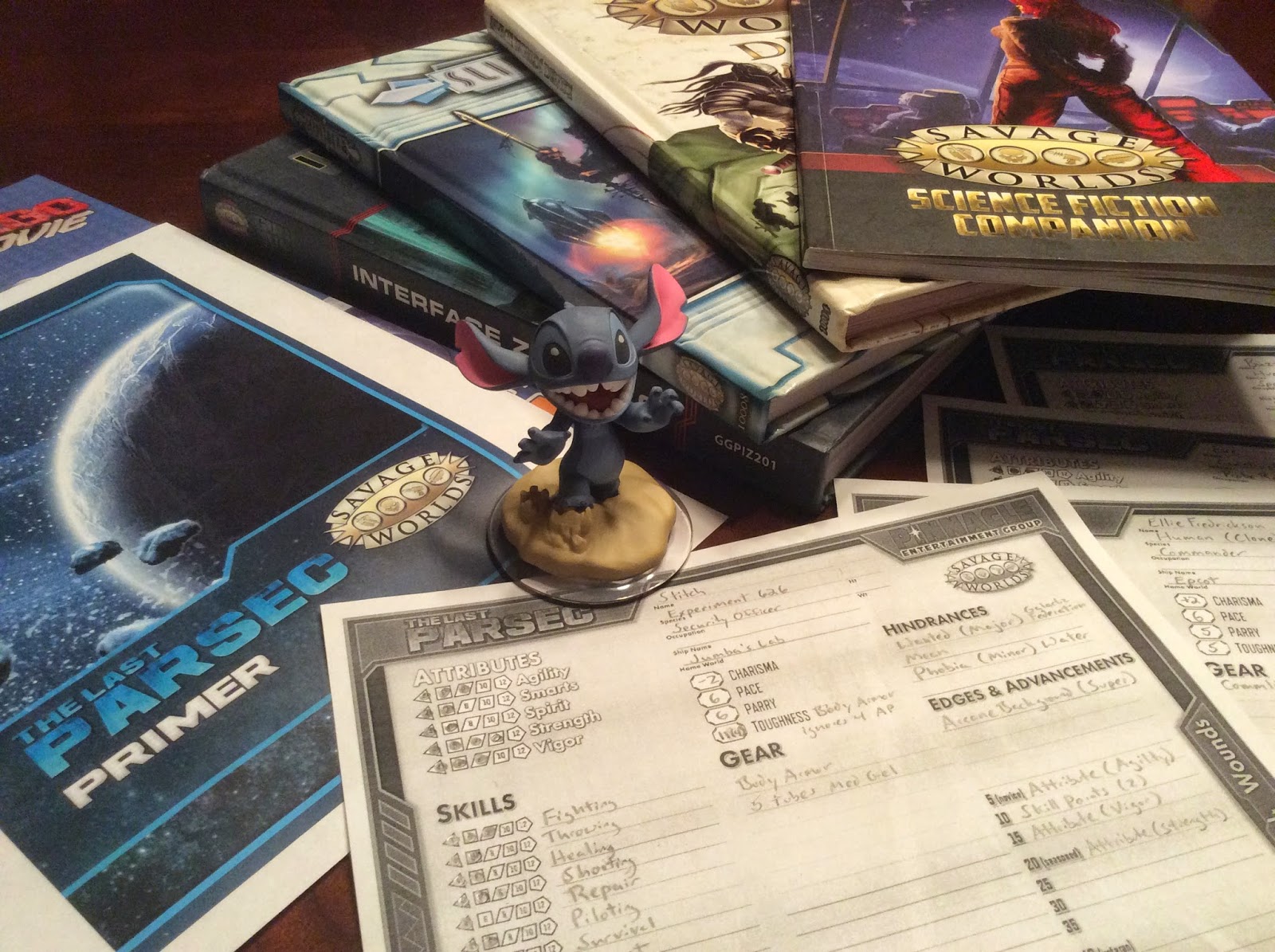 We've been here before…

Almost a year ago I sat down at the table and laid out the groundwork for what would become Disenchanted Tales, a Numenera campaign featuring characters from Disney Animation.  We were planning a trip to Disney World, and were looking for a role-playing game to take along and play in public.  You could say that this was our very first #GetOutAndGame.  My daughters played Anna and Elsa, and my wife Merida, forever becoming the "Three Princesses of Nihliesh."  The campaign continued beyond our Disney vacation.  Over the course of eighteen play sessions, including most recently the 9th World Christmas Special, I introduced twisted versions of the heroes and villains from several of my children's favorite movies.

Unfortunately we aren't planning a trip to Disney World right now… at least not yet.  But we are planning a brand new family campaign for 2015, and the "spiritual successor" to Disenchanted Tales will be played using the Savage Worlds system.

It was just after Christmas, and I started looking at my 2015 game schedule.  Online, the Quattro con Carnage campaign continued through the holiday season, and my Numenera campaign was to pick back up at the end of January.  Our local, in-person game of The Strange was scheduled for late January as well.  My Savage Worlds campaign was…
wait…

I didn't have Savage Worlds on the schedule!

This could not stand!  I have a proud and impressive tower of gaming that needs to be represented at my table.  As many of you may have noticed, there have been a lot of Savage Towers posted on social media; incredible pictures of stacks, rising several feet off of dining room tables and couches.  I posted mine one evening, and was quite proud of my accomplishments, but after chatting with my good buddy Andy, I realized that less than half of my tower had seen significant play time.  I decided to kickoff the 2015 gaming season with the system that provides "Fast, Furious, Fun" like no other on the market.

It was time for more Savage Worlds.

Conversing with my Princesses

Not only was I lacking a Savage Worlds campaign, more importantly our family hadn't chosen our next campaign.  During the holiday season we ran three sessions of Santa Claus themed RPG's:  Savage Worlds Accursed, Savage Worlds The Last Parsec, and of course the aforementioned 9th World Christmas Special.  There was some discussion about returning to Accursed full time after the holidays, but we decided that we wanted to do something "new."

I grabbed the wife and kids on New Years Day and gave them some options.  On the table in front of them I put down seven campaign settings for Savage Worlds to choose from.
We did two rounds of votes.  The first round narrowed the choices down to 50 Fathoms, Sundered Skies, and Necessary Evil.  Evie (8) wanted 50 Fathoms because she "likes skulls and pirates" and Carrie (10) wanted Sundered Skies because she wanted a ship.  In the end the girls picked Sundered Skies and everyone went to bed.

Except for me… I was second guessing myself.  Just before bedtime, Carrie asked why I didn't include The Last Parsec as a choice.  Certainly it was one of our favorite games of 2014, but we only played twice.  There were two reasons:
But I kept thinking like I was missing something.  Last year when we decided to run Numenera - Disenchanted Tales, I was ecstatic, and couldn't stop thinking about and planning the campaign.  Later in the Summer, when we tackled Accursed it was the same feeling.  Sundered Skies is a terrific fantasy setting that I definitely want to play again in the future, but it wasn't going to be an easy fit for the family.  I would have to lighten the dark and gritty tone, which would wash much of the flavor out of the game and just leave fantasy characters and ships.  When I run a pre-existing campaign setting, I want to keep as much of the setting intact while injecting plots, characters, and events that would help to engage my children's interests.

The Last Parsec is designed to be a sandbox style game, a true open world… or worlds for that matter… easily adapted to any group's play style.  The three setting books, Eris Beta-V, Leviathan, and Scientorium, provide amazing locations where action can take place, but leave most of the universe open to each game-master's interpretation.  Carrie obviously would have chosen The Last Parsec, and Evie would most likely tag along to anything else we would play.  It just came down to my wife.

My family is obsessed with Walt Disney World and Disney Animation, but my wife is by far the biggest fan in our house.  From her purses to her jewelry, she's almost always adorned in something "Mouse-related".  A year ago Jen was barely a social gamer, but once I introduced her to a Disney-enhanced Numenera, she became a regular player.  So I changed my angle.  Last night I sat down again with my family and gave them the elevator pitch for a Savage Worlds: The Last Parsec campaign.  But as my wife's face slowly started to grimace I revealed the other part of my sale.

This version of The Last Parsec would take place in a universe steeped in Disney Animation, themes, and characters.

There is a tremendous amount of inspiration to be plucked from Disney's take on science fiction.  The campaign's starting location would come straight from Walt Disney's imagination - the world of Epcot - an Experimental Prototype Community of Tomorrow.  Organizations such as the Galactic Federation (Lilo and Stitch) and Buy 'n' Large (Wall-E) could easily co-exist with JumpCorp in the Last Parsec universe.  Characters like Captain Eo (Michael Jackson's Epcot show), Jumba & Pleakley (Lilo and Stitch), and Sgt. Tamara Jean Calhoun (Wreck It Ralph) may already be working for JumpCorp.

And there are so many others to choose from:  Treasure Planet, Tron, Big Hero 6, Toy Story, even Guardians of the Galaxy.

I would also have the opportunity to use some of my other Savage Worlds resources that I've been itching to give a formal test drive.  I was a proud Kickstarter backer on Interface Zero 2.0 from Gun Metal Games, a setting and collection of sourcebooks that feature very accessible cyberpunk elements, from edges to adversaries, for use in any sci-fi game.  I dusted off Slipstream, in all its pulpy-goodness, to help create that true taste of Disney's Tomorrowland.

Outside of Disney and Savage Worlds resources I also grabbed 0-hr art & technology's Kintaro PDF, a very sleek and stylish ship that would become both a part of the setting as well as a central character in the story.  Actually I have a very cool twist for the party's ship, as "she" will be an NPC and not just an object.  No spoilers!

Out of the Disney Park!

The sales pitch worked.  Jen seemed pleasantly surprised by both the change of setting as well as the inclusion of the Disney theme.  The kids were bouncing off the walls at the announcement, and while they needed to "think about" characters for Sundered Skies, all three children (I let the 4 year old in on the game as well) shouted out their choices almost immediately.  It took me much of last night, but I lovingly crafted each character to suit both the original character as well as the player.

The magnificent galactic hero of Earth, after defeating Emperor Zurg, Buzz decided to join JumpCorp and travel "to infinity and beyond!"  Played by Cooper… keep in mind that Cooper is only 4.

So that's our team.  I'm putting the finishing touches on an introductory adventure that we should be playing later today.  From there I will be giving the players choices of missions and locales.  Maybe we'll be heading to the jungle world of Leviathan, or the rich system of Eris Beta-V.  It will be entirely up to the wife and kids, as I hand them the flight yoke.  As the campaign progresses I will continue to share some of the mechanics of our gameplay, whether its a new species, piece of equipment, power, or alien monstrosity.

I'm now retiring to an afternoon of home videos.  All of this talk of Disney Gaming has prompted the wife to turn on the videos of our most recent trip to see the Mouse.

If you'd like to learn a bit more about the setting, Pinnacle Entertainment has a terrific Primer for The Last Parsec available as a free download.  I hope you'll be joining us for our first adventure in the universe of tomorrow!
Posted by Living 4 Crits at 11:52 AM