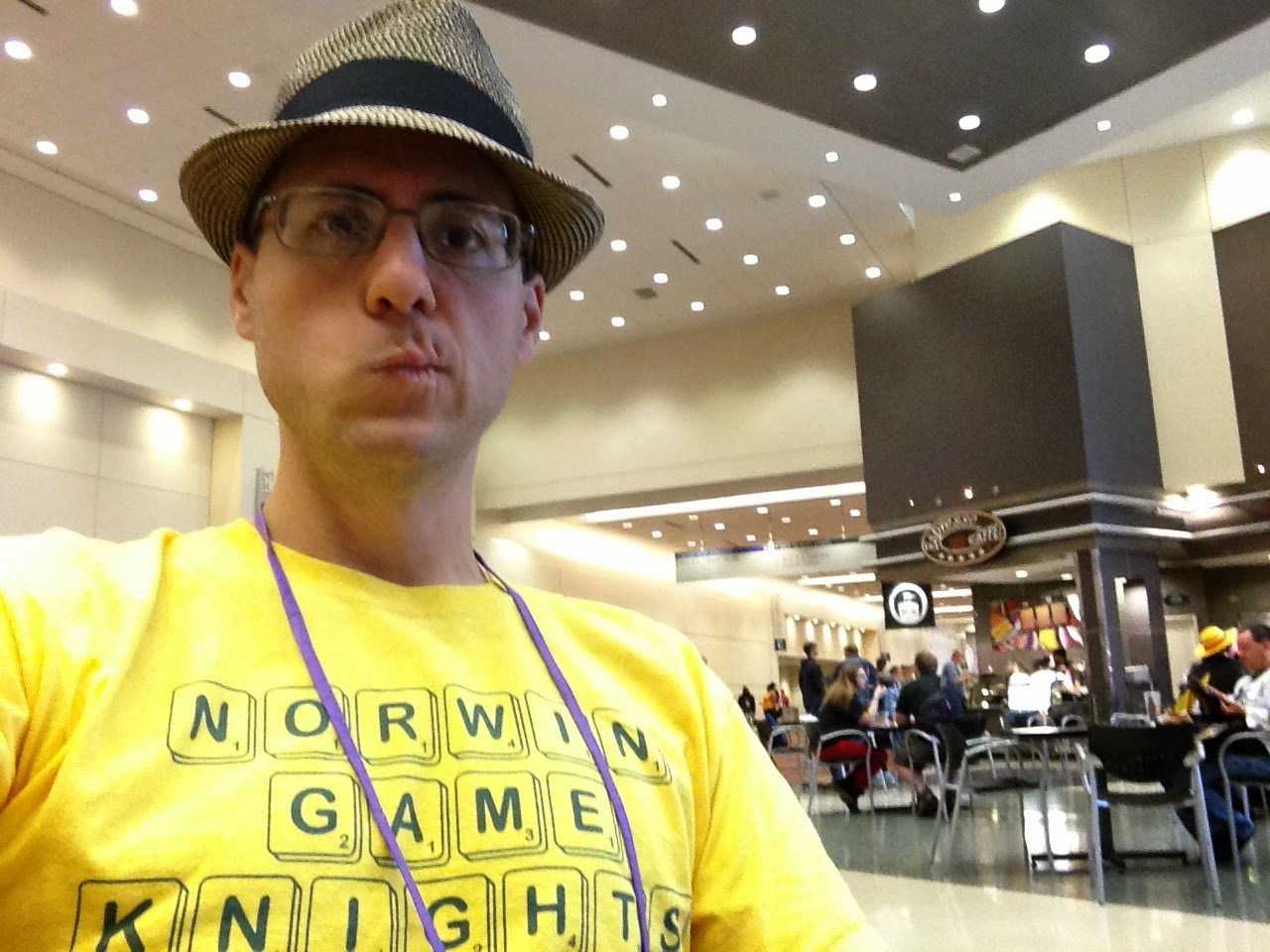 Late last year Lex Starwalker brought a group of Cypher System bloggers together to discuss various topics in roleplaying games.  I was lucky to be included with an incredible group of writers which also includes Marc Plourde, Scott Robinson, John W. S. Marvin, and the main-man himself, Mr. Lex Starwalker.  For January, we were all to respond on the following question:

"How would you, as GM, encourage roleplaying in a player who doesn't roleplay as much as you'd like, whether it's roleplaying with NPCs, being more descriptive in combat, or referring to themselves in the third person?  If you want to take the roleplaying at your table to the next level, how do you get your players on board?"

Being a good role-player is not necessary to enjoy role-playing games.  Everyone comes to this hobby for their own reasons.  Some definitely enjoy the interaction between their player characters and the various non-player characters in the campaign setting.  Others love the mechanics of their game, and want to enjoy the technical aspects: the dice rolling, gaining experience, choosing new options.  There are also those who just want to hang with their friends, and their friends happen to be role-players.  Granted, those folks in this last category were more likely to show up in high school and college, but I’ve still run across a few social gamers as I’ve grown older.  So long as everyone at the table is comfortable with other players not being in character as much, there is nothing wrong with having a mixed group of styles in your campaign.

But I do mean everyone at the table, as a lack of roleplaying certainly has drawbacks in some systems.  Pure mechanics and technical play is possible in many games where the rules and system can be the main focus of the game.  Systems such as 3rd and 4th Edition Dungeons and Dragons, Pathfinder, and Savage Worlds have very robust mechanics that can be fun and entertaining even for those who don’t want to interact in character with their environment.  But this can be more of a challenge with "storyteller" type games, where the mechanics show up less frequently.  Depending on the game-master, Cypher System games (Numenera and The Strange) tend to be very story driven, and rules light, possibly leaving players who are disinterested in roleplaying out in the cold as strong role-players take center stage.

Back to the initial question, which I plan to tackle out of sequence, starting with the second part:

"If you want to take the roleplaying at your table to the next level, how do you get your players on board?"

Jim's Short Answer:  As a game-master, if you create a truly immersive experience for your players, roleplaying will feel more natural at the table.

Jim's Much Longer Answer:  Every game-master is most certainly different in how they get their players engaged and active during their games.  I like to start laying the groundwork for roleplaying early, when I am organizing the campaign materials and crafting the world and/or adventure that I’ll be presenting to my players.  If a game-master wants to create a campaign with vibrant roleplaying, he or she needs to start creating the social details well ahead of time, and give them just as much attention, if not more so, that he or she would combat encounters.

… and by sit there I mean just roll dice.

Creating a rich roleplaying environment starts with knowing your campaign setting, knowing your non-player characters, and knowing the backgrounds and motives of your player characters.  If you know every aspect possible of the setting, your players will notice, and they will start to believe that they truly are taking part in a shared story.  I like to have a list of possible NPC’s available, and if I don’t have someone ready to go when the players enter an establishment or locale, I make them up right then and there.  After the player character interaction, I make sure to document the encounter for possible future use.  This creates continuity in the story and setting, which further helps bring the players into the game.

Knowing the motives of your player characters requires a little help from the players themselves, obviously, but simply asking your players about their backstory and goals does two things for your game.  First, it gives you as a GM some fresh material to work with, and meld to the setting or adventure you’ve created.  Second, simply by asking your players for character information, other than statistics and gear, your players will realize that they are joining a campaign where story is important.

Once you’ve created a fully immersive experience, you’ll see more roleplaying throughout every aspect of the campaign, from combat to NPC interaction.

Even still, there will possibly be players at your table who aren’t as interested in roleplaying. This leads to the first part of Lex’s question:

"How would you, as GM, encourage roleplaying in a player who doesn't roleplay as much as you'd like, whether it's roleplaying with NPCs, being more descriptive in combat, or referring to themselves in the third person?"

For some games and campaigns this may not be an issue.  You may play in a group where one or two of the other players just never "get into" the story, and would rather sit back and roll dice.  I want to state again that this is entirely okay, so long as everyone at your table is comfortable with the level of interaction.  One of the great things about our hobby is that there are so many ways to play these games.  But if you, as a GM, have decided that you will run a campaign where roleplaying is encouraged and at the forefront of gameplay, you need to address this with your players as soon as possible, preferably before the first session begins.

If you are running a campaign where roleplay is critical, you may find some players to be quite challenging.  Having one or two players who sit along the sidelines during in-game interaction may be distracting, or even worse, it could become contagious.  Although it can be uncomfortable, as a game master you need to address these players one-on-one and talk to them about the game and your ideas and plans for their character.  Maybe they aren’t enjoying the persona they’ve taken on, or they are uncomfortable expressing themselves in such a way with a group.  Look at the way that you are handling scenes and encounters.  If you as a GM aren’t roleplaying these events, and are giving simple descriptions rather than painting complex backdrops, this too is contagious, and could possibly be a source of distraction.

Maybe the player is new to the system, setting, or even the hobby. Being nervous around seasoned gamers is common with new players, who have just entered our illustrious ranks. In these instances its best as a game master for you to just sit back and continue running the game you want to run.  Once the new players become comfortable, they will start sharing more at the table, and soon enough you’ll have a die-hard roleplayer in the group.

At the other extreme, you may have a player who is a veteran gamer, but adamant non-roleplayer at your table.  This presents a significant challenge.  You may have spoken to this player, received assurances, and developed a great backstory for their player character, still with no result.  They are going to play the game their way, no matter what you do.  In these instances YOU have to make the choice.  If the player’s lack of interaction is not distracting, or if they offer some other benefits to the game outside of roleplaying, just be supportive of the of the whole group and continue your game.  However, if the player’s style of gaming is hurting the campaign, you may need to ask the person to bow out and find a different game.

Make sure to include your own enjoyment when considering this final point.  You as a GM may not be able to conduct the game you want to play if there is someone not contributing the way you’d like.  In the end, it is your game, and while I’ve stated several times now that there is nothing wrong with a lack of roleplaying at the game table, there is also nothing wrong with determining and selecting who gets to play in your games.  In the end, being a roleplaying game-master is not a job, or volunteer work.  Your enjoyment of the game is just as important as everyone else’s.

Want another perspective? Well you’ve got more writers to choose from!  Over the next few days there will be more posts on this subject from the following incredible bloggers: