When is it the Player's Turn? - Mouse Guarding Your Favorite RPG 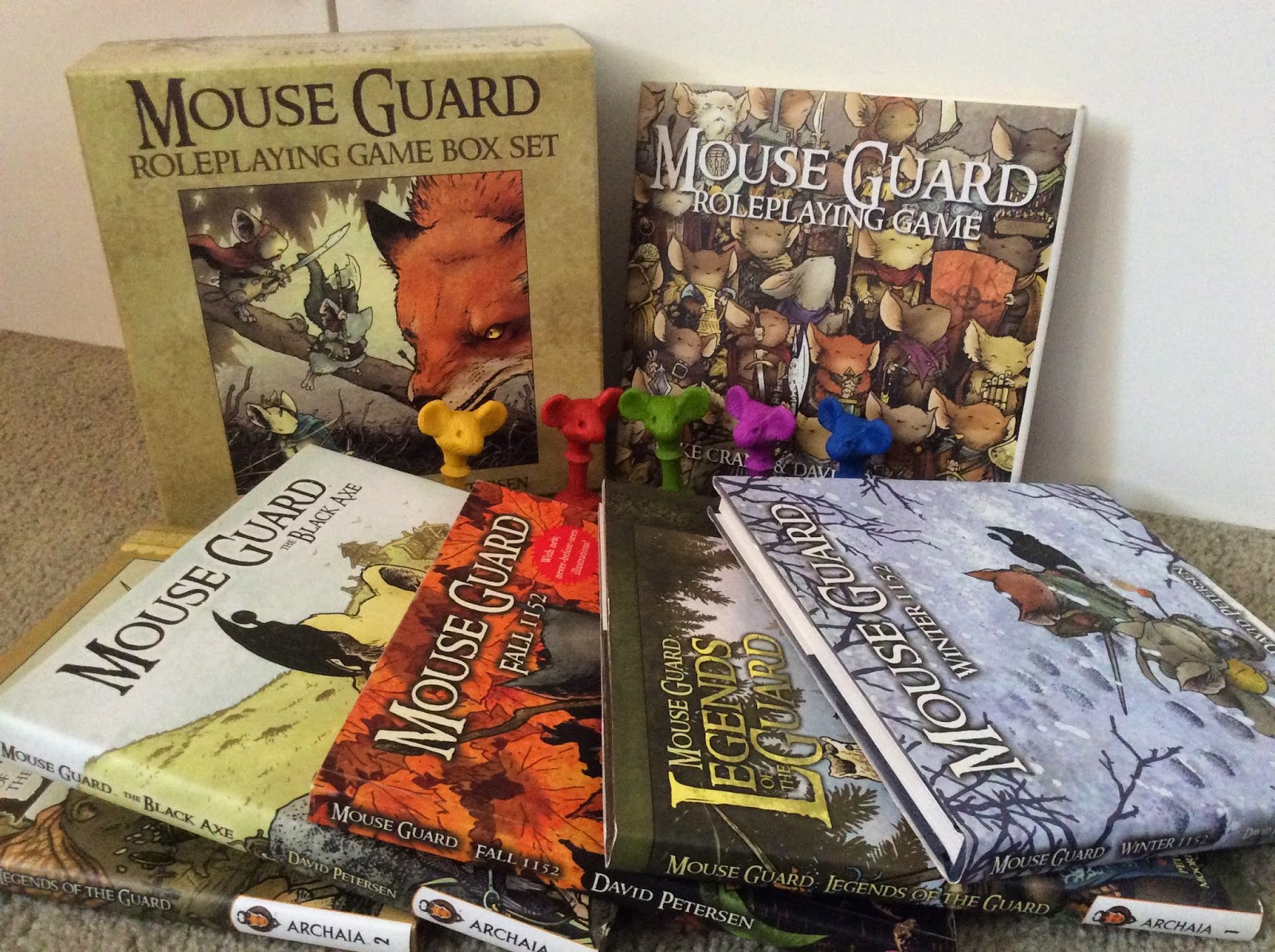 Do you remember that time when I wrote a blog post as part of an amazing circle of fellow adventurous bloggers?

So this month, the Game Master's Roundtable of Doom (aka the Roundtable formerly known as the Cypher System Bloggers) is tackling role-playing game system mechanics an an inter-system, cross-dimensional kind of way.  Specifically the main man himself, +Lex Starwalker, posed the following question:

Last year I had the opportunity to finally play the Mouse Guard Roleplaying Game, by Luke Crane and David Peterson.  I have been an avid reader of David Peterson's Mouse Guard comic book series for several years and love the art, style, and beautifully crafted characters.  That said, this was my first time playing Luke Crane's modified Burning Wheel system, despite having the rules for about as long as the comics.  When I purchased the hardcover RPG, I found the system very distinct and different from the games I was playing at the time (D&D 4E and Savage Worlds).  The game mechanics in Mouse Guard are somewhat abstract, and they focus on creating and preserving a jointly crafted story, with both GM's and players acting as equal storytellers.  I definitely wanted to sit in as a player first, but until I discovered Google+ in 2014, I didn't have an opportunity.

When I found an open seat during an online Mouse Guard my eyes were opened to an innovative and thought-provoking role-playing game system.

I'll refrain from a full review of the game, as I don't want to travel too far from my point, so here is just a quick overview.  A Mouse Guard session is broken into two parts: the GM's Turn and the Player's Turn.  During the GM's Turn, obstacles and challenges are placed in front of the players, and they have to leverage their abilities, skills, traits and teammates to seek meaningful outcomes.

Note the word "meaningful."  Mouse Guard isn't a game about winning, its about character development.  Success, failure, joy, strife, GM's and players are encouraged through the game mechanics to jointly explore all of these equally.

A player is just as inclined to use a trait (such as Hard Worker, Clever, or Defender) as a penalty to a test as they would as a benefit.  The benefit could be a "+1D" (rolling an additional die) to a roll, while a penalty may be "-1D".

For example: My character, Avarick, has the Early Riser trait.  During a particular encounter, Avarick and his fellow guardmice are trying to sneak into a weasel encampment.  Let's say that Avarick wants to enter the camp through the front door, timing his entrance for the weasels' shift change.  The GM states that I need to make a Nature (Mouse) test, so I'll be rolling 4 dice (6-siders).  If I wanted to use Early Riser as a benefit, I could say to the GM that I want the +1D because Avarick had time to wake up and start planning his day while everyone else was asleep.  Alternatively, I could say that Avarick woke up early after getting to sleep late, and he was pretty tired, thus losing 1D for the test.

But why would a player want to take a penalty?  What kind of game mechanic invites players to make their game more challenging?


When the game shifts from the GM's Turn to the Player's Turn, its time for the other side of the table to start calling the shots.  The players decide how the story is going to progress, and what kind of personal missions or goals they are going to achieve outside of the GM's planned session.  Each attempt to perform an action during the Player's Turn, however, requires a "check" earned during the GM's turn.  Using traits in a negative way gives the player "checks".

To put this into Numenera terms, think of a check as a reverse GM Intrusion… a Player Intrusion!  The player has earned in-game currency and is going to trade it for limited control of the game.  Checks can also be used for other benefits, such as gaining a recovery check to remove a condition during the GM's turn.

The Mouse Guard Roleplaying game is over three-hundred pages long, and I am certainly not doing the entire system justice with this description, but it should give you an idea of the flavor of each session.


A Player's Turn in Other Systems


We're taking the long way towards the original question posed.  All systems have ways to incorporate player interaction at the table, and having a separate "Player's Turn" may seem strange and rather alien.  It certainly did for me, which is why I was so reluctant to play the game before GMing.  The concept of dividing the game sessions between two distinct phases is certainly abstract.  But now that I've seen the system in action my opinion has changed.  I can see the value in giving the players clear authority over the story's direction, and this could certainly work in other systems.

A Player's Turn may not work in every game session, especially not during a multi-session, Dungeons & Dragons style dungeon crawl.  But when the party returns to camp or a base of operations, it may be the perfect opportunity to give your players full reign over the game.  As a GM I expect my players to come up with interesting backstories, and personal quests that they develop as the campaign progresses.  As much as I want my players to interject their ideas into the game, in a traditional RPG format the players must wait for a lull in the adventure to explore their characters' personal quests.  Clearly delineating a break between the GM's Turn and the Player's Turn ensures that the characters each receive an opportunity for creative development.  They know that they will have the chance to build that wizard's tower, or enter a shady side deal with a local gangster, by the end of the session.

As to the checks that are earned, a mechanic that promotes a player to embrace added risk in return for future reward is already a proven commodity.  Savage Worlds has the Benny system, coupled with a robust list of Hindrances.  When players role-play their hindrances they may be rewarded with bennies that can be spent later to improve rolls.


As I thought about answering Lex's original question, I started thinking about ways to incorporate a Player's Turn into my Numenera campaign.  This lead to the concept of a defined "Player Intrusion".  During a Player Intrusion, a player can choose to role-play their Descriptor in a manner that increases the difficulty of a roll by 2.  The roll must be for something meaningful, such as an important non-player character interaction, or during a pitched battle.  GM discretion would be required.  A Player Intrusion can be done once per session, and gains the PC an "Introspection."

The GM declares the last hour of gameplay to be the Player's Turn, and each player gains one Introspection for completing the session, as well as an additional Introspection for taking on a Player Intrusion.  Introspections can be spent by the player to create a non-player character, introduce a subplot, or influence the setting in a manner that affects the campaign.

For example, Craig is playing Jak the Mutant Glaive who Constantly Evolves.  During combat with a mercenary, Jak is fighting to protect the lives of his team and needs to make an attack roll.  Craig wants to gain an Introspection, so he states that Jak's latest mutation causes him to shake occasionally when under stress.  Player Intrusion!  The difficulty to hit the mercenary is a 3, which increases to a 5.  Craig must now roll a 15 or higher on a d20 to succeed in the attack.

Later, when back in Qi, Craig spends his Introspection to declare that the Iron Wind had been spotted by a nearby farmer, creating panic in the city that will certainly affect the way the next few scenes play out.

Obviously adding this kind of player interaction in your game would require trust between all players and the game master, but a clear Player's Turn could be a great way to change the dynamic at your game table.  Even if you don't plan on using this quick and dirty Player Intrusion mechanic, consider saving time at the end of each session for the players to explore backstories and side-quests.  Not only will this help create interesting stories, the non-linear dynamic will showcase how an RPG session isn't just a choose-your-own-adventure story, but a game where anything and everything is possible!

One question - Four answers!  If you want a few more perspectives on this topic you've got four more amazing bloggers to choose from: