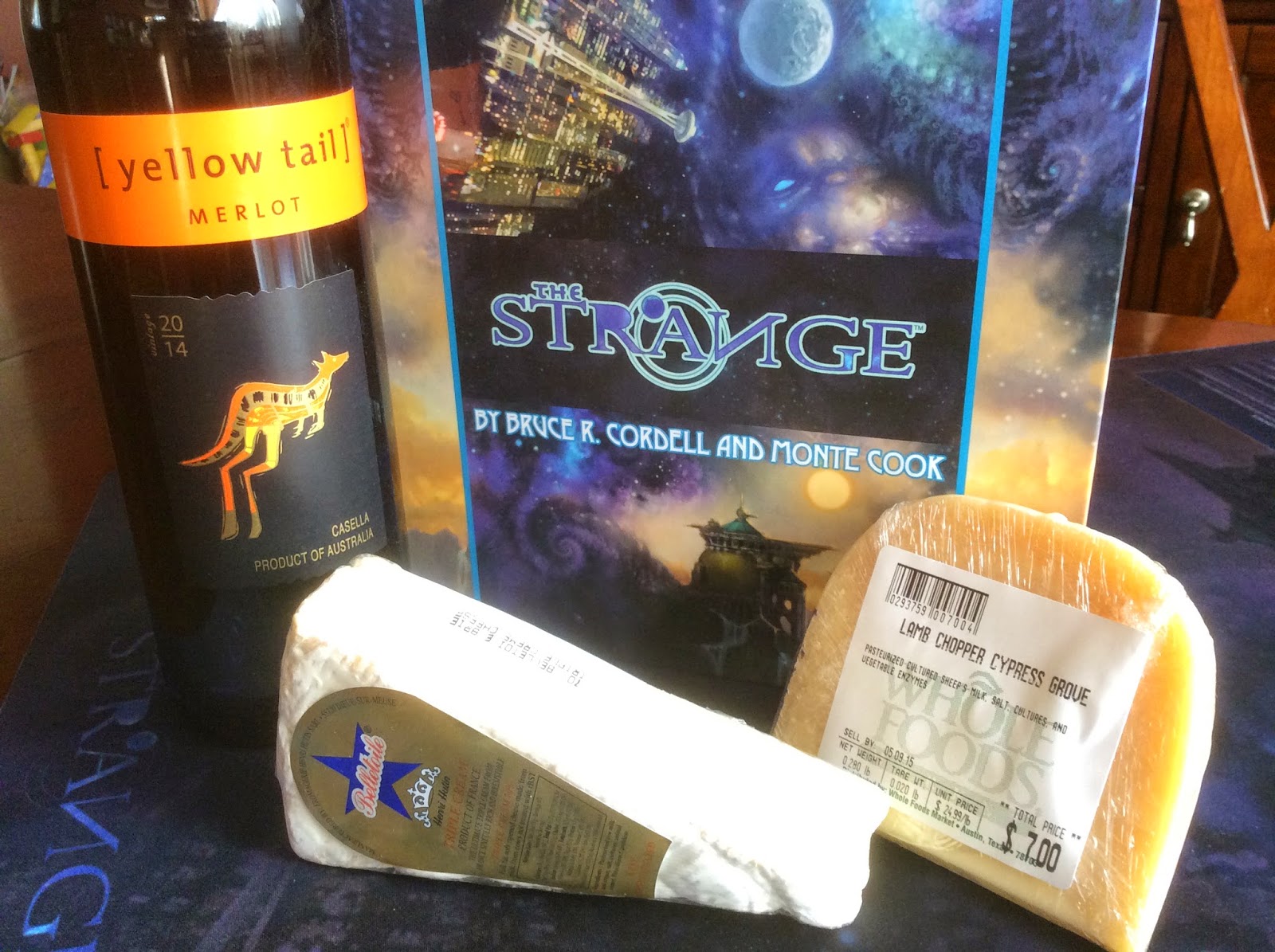 I have to apologize for my game master performance last night, and the resulting game summary that you are about to read.  After several afternoon games of The Strange with our friends, we decided that this month we'd try an evening session.  My wife Jennifer and I invited our regular players to the table, but also two new Estate Agents: cheese and wine.  The result was a rather raucous session, in which my players were more often trying to one-up each other on "quotes", rather than proceed with the mission.  Towards the end of the evening, however, I started to drift a bit.  First it was a lazy gaze at the clock, and then it was a soft yawn, and then… uh oh…

I started to fall asleep!

I don't often drink more than one or two beers in an evening, but by my third glass of wine (following a small glass of a terrible vodka-based punch I made), and fiftieth cheese laden cracker, I was getting warm and sleepy.  Around the same time I was trying to role-play the Sorcerer-King of Tyr, with limited success.  Coming up with dialogue was a challenge, and even with a list of motives in front of me, I stumbled on responses to player interaction.  I kept hoping that no one in my group did anything too crazy that would require a completely ad-libbed scenario…

… I kept looking at Jeremy, who had already killed one NPC without hesitation during the evening.  Why not try again?

But it all worked out!  The banter was fun, though, and in the end everyone had a great time.  Enjoying a few drinks at the game table is awesome once in a while, but I think it'll be a few months before I try mixing the two again!

Agents of the Estate


Although the silk wyrm's lair was moist and inviting, the newly escaped slaves/Agents of the Estate had a mission to complete.  Sherlock Holmes was somewhere near Tyr, perhaps in terrible danger!  Babs was delighted that her new crodlu Zoidberg had survived the terrible flaming tornado, so imagine her concern when Arlo made the request to "borrow" the creature for a quick scouting of the area.  The graceful vector planned to team up with his thri-kreen friend, Dr. Sybil, and sweep the perimeter for clues, salvage, and possible threats.  Something about the sandy wastes of Athas had turned Agent Arlo Coulton into a bit of a murderer, so Babs was apprehensive of her new pet being taken out for a joyride by a stone cold killer, and all-around bastard.

But for the good of the mission, Babs agreed.

After several hours of scouting, Babs and Dr. Sybil eventually came across a smashed wooden storage container.  Measuring at least a dozen feet long and eight feet wide, the "crate" seemed mostly empty, but Arlo wanted to be sure.  The vector enabled his chameleon flesh wild talent and slowly approached the salvage.  Inside was a single broken cask of wine leaking into the sand, and a single human form.  Arlo remained camouflaged, and Dr. Sybil carefully approached as well, noting to her mul associate that the human was still breathing.  Dr. Sybil approached, observing that the human was wearing a light, sandy robe with a hidden orange covering closer to his body.  There was a tear in his robes along his right side, and a trickle of blood was soaking the sand below.

Dr. Sybil reached into her thri-kreen memory and realized that the orange covering must have meant this man was a templar of Urik.  The two agents of The Estate started to interrogate the templar.  His name was Kempo Tigranus, and he was indeed a templar of Hamanu, the Sorcerer-King of Urik.  Tigranus was on a mission from Urik to spy on the happenings in Tyr, especially after the fall of its Sorcerer-King, Kalak.  According to the templar, a new Sorcerer-King had ascended to the throne after a gladiator slave killed Kalak.  Tigranus was on board the large wagon that had held the rest of the party when they first traveled to Athas, and was thrown far into the air when the tornado struck.

Dr. Sybil and Arlo didn't have any way to heal Tigranus' wounds, so they decided to return him to the silk wyrm's lair.  The templar surrendered his bone dagger, but when he was placed atop Zoidberg Dr. Sybil tried to relieve the human of his heavy coin purse.  Tigranus would have none of this, and immediately started praying to his Sorcerer-King for repeated Flamestrikes.  The second fiery blast left Arlo in extreme pain, Dr. Sybil's chitinous hide rather charred, and Zoidberg a burning cinder on the ground.  Arlo hacked away at Tigranus' flesh with El's Drinker, and a carefully landed claw-strike by Dr. Sybil ended the templar's wicked life.  When the scouts returned to the rest of the party, they sadly gave Babs the head of her beloved Zoidberg.

She was not amused.

The Estate agents waited until the evening to travel the last eight miles to Tyr.  Upon reaching the city walls it was early morning, and the team needed to figure out how to enter the grand city.  The Caravan Gate was the most well traveled, and Agent Dingo insisted that the party sneak into town by stowing away on a wagon.  Arlo preferred a more stealthy approach, sneaking in by climbing over the walls.  Unfortunately, the graceful vector was the only member of the team that could easily remain out of sight, so this was ruled out.  Eventually the team decided to masquerade as "Athasian Day Laborers", offering to help a trio of dwarven mushroom farmers in carting their wares into the city.  Pokko, Metzla, and Laurie were from the nearby village of Kled, and appreciated the help.  The city guards paid the Estate agents no mind, not even Babs who refused to get her hands dirty, and instead just gave a single, long motivational speech to encourage the heavy lifting.

Once inside Tyr, stories of the new Sorcerer-King were on the lips of every guard, noble, merchant, and slave.  This came as quite a surprise to Chuck Lannigan, who remembered that, in the Prism Pentad book series, the slaves were freed following King Kalak's death.  Something changed in this recursion, and it only took one look at a piece of street art depicting the new king's visage to tell the tale…

… the new Sorcerer-King of Athas was Sherlock Holmes!

The team of Estate Agents needed to get an audience with the Robert Downey Jr. version of Sherlock Holmes, and see what his plans were for Tyr and the rest of Athas.  Using the silver pieces that she had stolen from Templar Tigranus, Dr. Sybil purchased a fine silk robe for Agent Dingo, so that she could talk her way past the palace guards.  On the south-western side of the city was the entrance to the Templars' Quarters and Palace.  Adorned in finery, and sporting a rag-tag entourage, Jackie Dingo talked her way past the first guard by claiming that there was a terrible plan by the city-state of Urik to assassinate the new king.

While this story worked for the lower-level templar guard, it didn't seem to work with Gharana, the mid-level templar for Sorcerer-King Sherlock Holmes.  Despite her best efforts to persuade Gharana, the templar stated that just about everyone wanted a sorcerer-king dead, and that there was no need to bring the issue directly to Sherlock's attention.  That's when Chuck Lannigan mentioned "Mrs. Hudson."  This name got the attention of someone at a higher level, and within moments Gharana escorted the party to the Sorcerer-King's chambers.

When the agents of the Estate entered the Sorcerer-King's suite, they stood in amazement at Robert Downey Jr.  His form was somewhat changed from how he had appeared in the movies, with a giant brain that expanded his skull to be twice the size of a normal human's.  But the rest of his body was perfect.  Babs boldly asked to gaze upon Sherlock Holmes' incredible abs, and the sorcerer-king willingly complied.  While the paradox gawked in awe, Holmes revealed that he knew everyone in the party.  He was aware of the Estate, aware of their desire to return him to 221 B Baker Street, and aware that he was only an "awakened" fictional character from a Guy Ritchie interpretation of a Sir Arthur Conan Doyle series.  But on Athas, Holmes proclaimed, he had full control and power of the recursion.  His incredible intellect was warped by the psionic nature of this recursion, allowing him incredible power.

"Here, I can write the story myself," Sorcerer-King Sherlock Holmes boasted.

Not sure of any means to force an empowered Holmes to leave Athas, but knowing that this scenario must have meant trouble, the party decided to leave the recursion and get instruction from the Estate.  Holmes offered to let the party use his meditation study for the translation, and within moments the party was on Earth.

Director Katherine Manners, was not happy about the situation.  She feared that Sherlock Holmes' innate mental ability could cause havoc throughout the Strange, perhaps even elevating the rather small recursion of Athas into a place of significant, and dangerous power.  An even worse risk would be that Holmes ascend past the demi-godhood of a sorcerer-king to becoming a Planetovore!  Director Manners told the party that they would need to travel to another recursion and find the only other individual throughout the universe who could possibly stop Sherlock Holmes…


"Is it moist?" - Jen had to go there… when they were exploring the Silk Wyrm's lair.

"Just return Zoidberg safe and sound… or your nuts will hang from the wall." - Babs to Arlo, before the Mul took her precious crodlu into the wastes.  RIP Zoidberg.

"I WANNA STAB HIM!" - Jeremy (as Arlo) had a unique method of interrogation.

"I'm in mourning over here!" - Babs, head in her hands about Zoidberg, didn't have time to consider moving forward.

"Once you go lizard… it's a slippery slope." - Jackie Dingo may have had the quote of the evening.

"Excuse me, man-sir-guard… " - Andy says that it was "ma'am sir guard" but that doesn't make sense either. 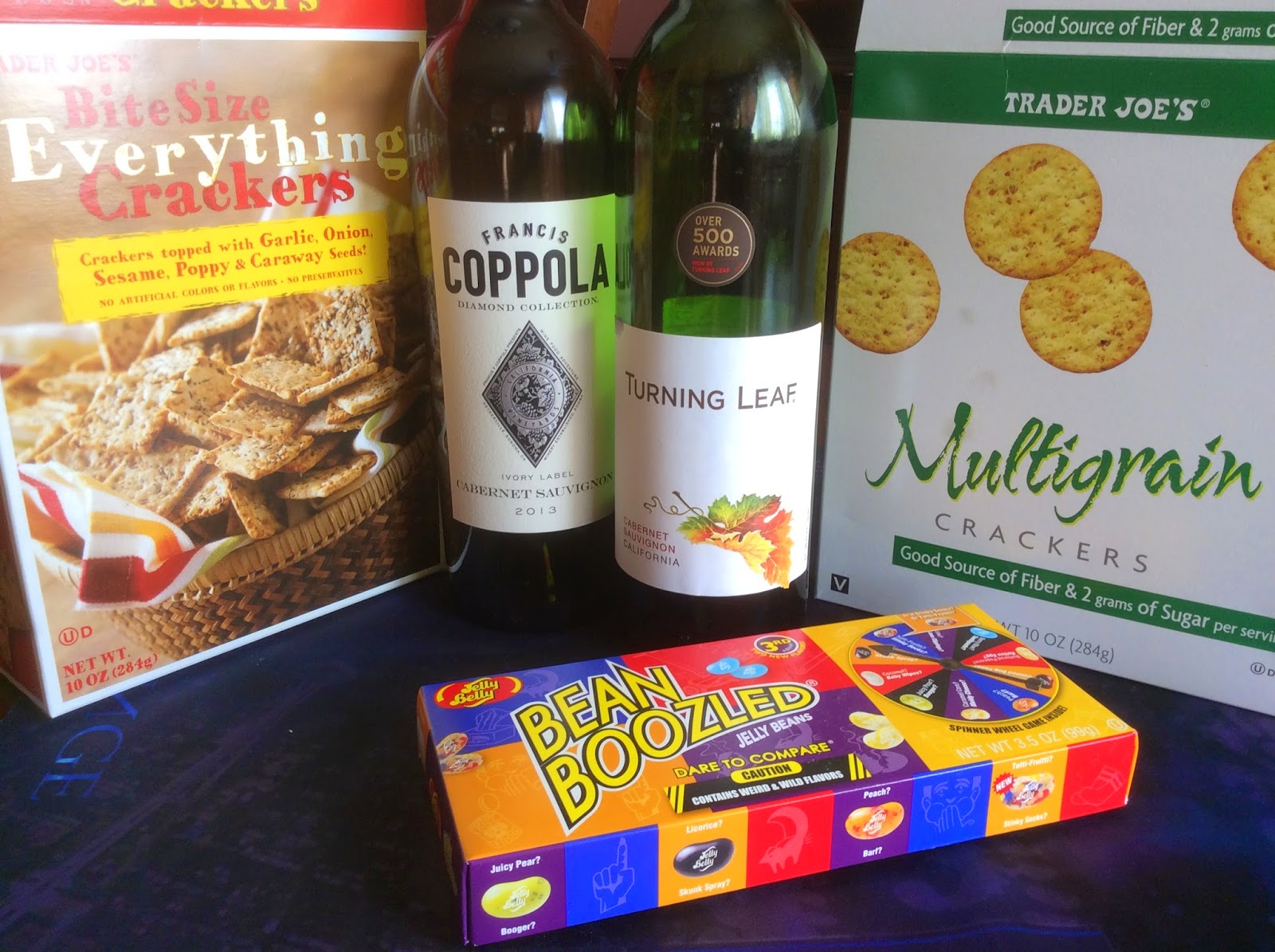 If you are interested in how to use Wild Talents, Defiling Magic, and Inferior materials, check out our first play report for Under Strange Suns, where I detail these rules.
Posted by Living 4 Crits at 1:00 PM