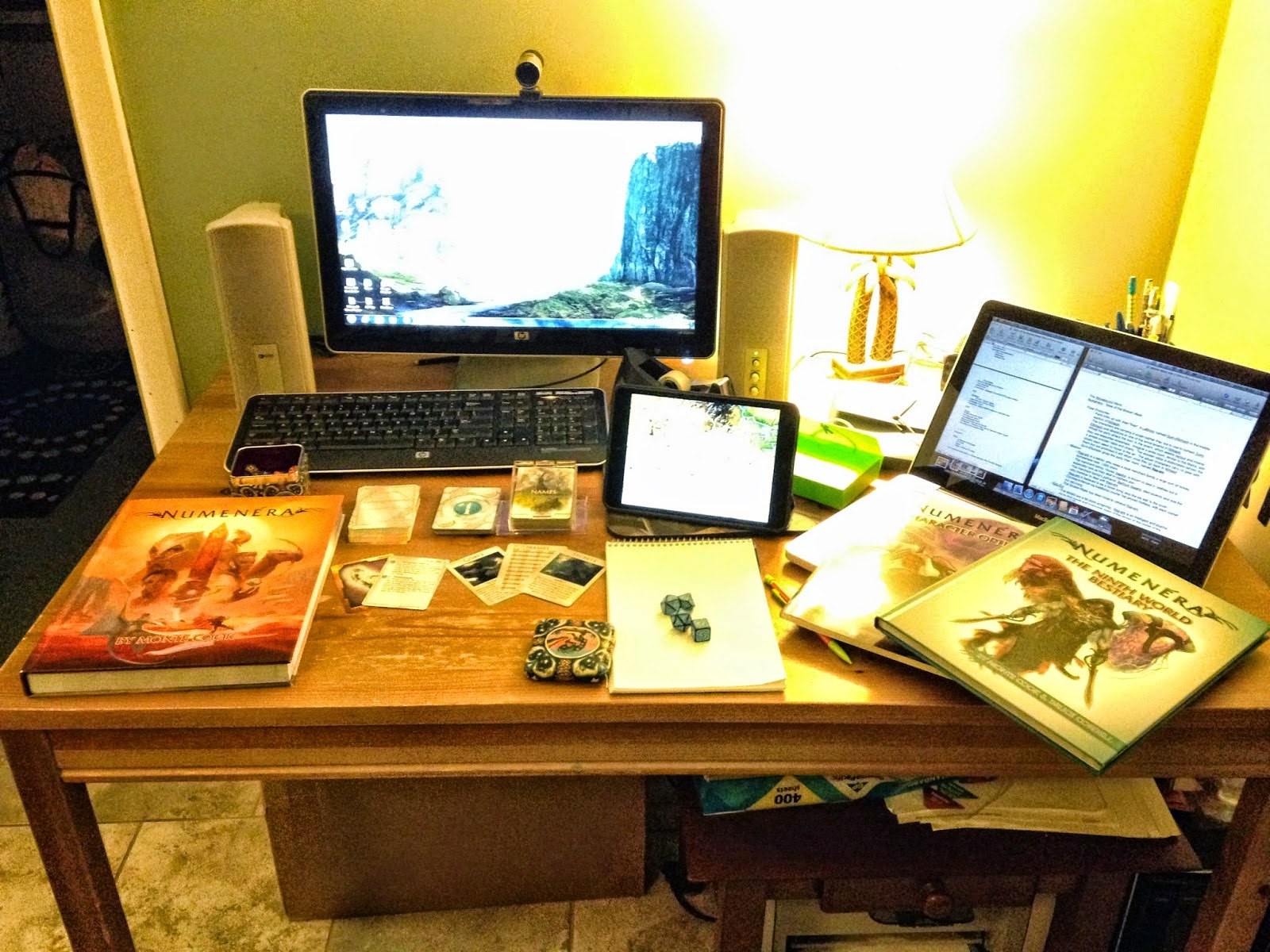 
Our story-arc for Pulse came to a close last night as our brave band of Numenera hunters discovered the source of the strange blood and fluids.

With Garren kidnapped, the brave party of ex-bounty hunters and numenera seekers examined the long artery that lay before them.  It was a thirty foot long, floppy structure, easily five feet wide.  Just moments before, the party's varjellen doctor was dragged into the tube by the enigmatic oorgolian soldiers.  Having just returned from a walkabout in the area, Jak the mutant glaive agreed to follow Takkorek the slacker nano into the cave from which the artery protruded.

Using a glow globe, Takkorek and Jak noticed that the cave extended fifty feet horizontally before ascending at a forty-five degree angle upwards for another seventy-five feet.  The artery stretched the entire length with no end in site.  The rest of the team soon entered the tunnel.  Halfway up the sloped passage, the party noticed a digging artifact, and after closer examination Chase/Raa-em realized that he could reengage the device if he chose to do so.

Glyquorg was interested in what was located at the top of the tunnel, and so the exiled jack continued to climb, noticing a faint blue glow at the end.  Cresting the top, the jack was in for an amazing sight!  Just ahead, the artery was dangling from a sheet of clear glass, connected to a massive form on the other side.  Awestruck, Glyquorg took stock of the amazing scene.  Beyond the glass was a six-hundred by two-hundred foot glass cylinder full of glowing blue liquid.  In the center of the pool was a five-hundred foot tall varjellen.  When Takkorek ascended he accidentally touched some of the weird foam that caused a seal around the artery, allowing the blue fluid to spray out and coat some of the party members still climbing.  The substance was incredibly cold, inflicting intense pain when it struck bare skin, as well as causing a mild sedation.

The body of the giant varjellen moved a bit, as did the artery, giving Garren a chance to break free.  The varjellen glaive slid the entire way back down the artery into the bloody pool below, before tracking the party back to the ascending tunnel…

… which was right about the same time that Takkorek decided to create a portal between the glass and the pool.  Quickly, thousands of gallons of the cylinder's contents sprayed out, covering the tunnel, as well as Garren, in a frosty brew.  When the glaive appeared he was not amused.  Using his medical knowledge, as well as that of his holographic assistant Nodwick, Garren explained to the party that the giant varjellen was like nothing he had ever seen, but was clearly in some kind of cryo-sleep.  Garren was also able to deduce that the amount of blood infecting the river Wyr was more than this body could hold, even with its immense size.  Something was refreshing the blood supply, perhaps the other tubes connected to the massive creature.

But the mystery remained: why were the oorgolians so interested in this creature?

Using his wormhole portal esotery, Takkorek sent Glyquorg into the giant varjellen's body.  Moving through the artery, and into the circulatory system of the incredible living creature, Glyquorg eventually came to the heart.  Consisting of two chambers, the first chamber had a pool of blood at the bottom, and a passage connected to the second chamber.  It appeared that several oorgolians were collected in the opposing chamber.  Glyquorg went back and brought the rest of the party into the giant's body.  One by one, Chase/Raa-em used his hovering esotery to carefully carry each numenera hunter across the bloody pool and into the chamber.  Sure enough, four remaining oorgolians were standing on a platform, collecting items and placing them in metal cylinders.  The platform was stretched across the chamber, preventing the heart from crushing the oorgolians should it start to beat again.

Glyquorg wasted no time, and leapt into the room, slaying the first oorgolian scientist with a single slice.  The second exploded in white hot flames, burned from the inside out by one of Chase/Raa-em's esoteries.  The dying oorgolian, still on fire, fell into the pit below, which must have helped to wake the giant, as the heart again tried to beat, still struggling to overcome the artificial structure inside.  Ralyx attempted to throw a razor ring, but forgot to let go of the weapon and went tumbling below.  Deftly he caught the edge of the platform, but knocked one of the containers open, spilling a small fleshy lump the size of a human head.  The reforging gland allowed a varjellen to reshape their heart, lungs, and other organs, and the enzymes that the gland secreted must have had some strange qualities.  As they dripped over the dangling Ralyx they caused his muscles to slightly atrophy, but his wits to become keen and sharp.

When the last oorgolian was slain, the party grabbed their dangling mlox, one of the reforging glands, and moved into the first chamber.  Hoping to restore the creature to good health following the experiments that the oorgolians must have been doing, Glyquorg and Garren worked to repair any of the damage done to the heart, including cutting the seal that kept blood from flowing into the primary organ.  Once this started to fill the chamber Takkorek created another wormhole and everyone ran out into the tunnel.

After much debate, the numenera hunters came to the conclusion that the giant varjellen should be set free.  Chase/Raa-em engaged the digging artifact to bore through stone and glass at the base of the tunnel complex, which would take an hour.  From a quarter-mile away the party watched with fascination as part of the nearby hill rotated and lifted away, and a giant, five-hundred foot tall naked varjellen stood up!  The majestic creature surveyed the land and looked confused.

"Hey!" called a lone voice.  The rest of the party backed away from Raa-em, who was clearly in control of his better half.  The mad nano wanted to get a closer look at the giant, and was very interested in making friends.

Carefully the giant varjellen walked over and knelt down next to the party.  Laying its hand down the giant motioned for Raa-em to climb aboard, which he did.  Raa-em immediately regretted this decision!  The giant's grip was crushing and incredibly painful.  Worse yet, the giant wasn't letting go!  Instead, it stood up abruptly and ran off into the distance, covering a mile in mere moments.  With that kind of speed, there was no way the rest of the party could catch up!

"I have an inability at making plans… so its entirely possible." - Takkorek definitely has an "act before thinking" personality.

"I think we should take it apart... for the sake of science!" - Andreas is all about the science.

"Hey guys, we found Varjellen prime!" - Garren gasped as he gazed upon the 500 foot long varjellen in the cryo tank.

"… into the peanut…" - Andy commented on Jim's drawing of a double-ventricle heart.

"It's like a wormhole 'stint'…" - Frank commended Jeremy's doctoring skills as Takkorek teleported blood from one side of the heart to the other.

"My character definitely wants to befriend this thing!" - Frank, just before his character got picked up by the giant varjellen.

"Frank, you're that blonde chick in King Kong… he's going to climb the nearest skyscraper with you…" - Craig after Frank's character got hefted off into the sunset.
Posted by Living 4 Crits at 10:27 PM