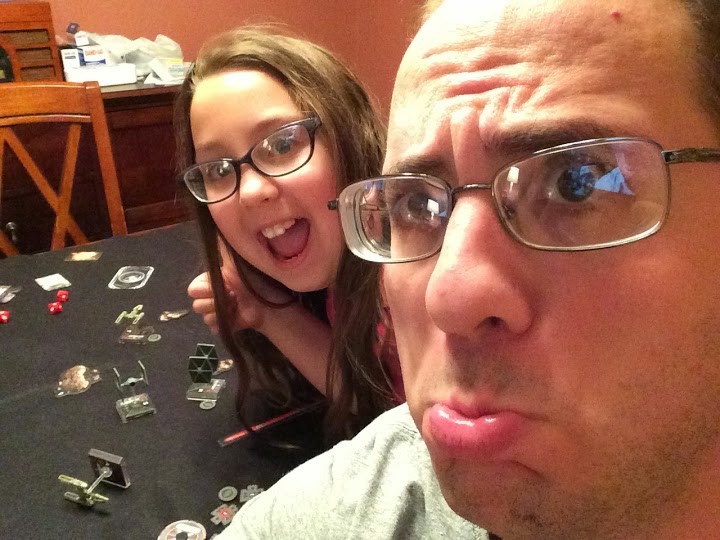 
This past weekend was quiet, with no role-playing games on the schedule.  Given my current infatuation with all things "Star Wars", I thought I'd introduce my two daughters to the game.  The girls were instrumental in the big "unboxing video" that we did with my wife, so it's only fair that they get a chance to take a few shots at their dad with our new game.

Carrie and I played our game on Saturday night, not long after dinner.  She had asked to fly the Millennium Falcom, and I happily obliged.  On Thursday when I played against Carmel, she was just using the Stock YT-1300.  But Carrie not only had the Falcon, she had Han and Chewie ready for action!

Evie didn't want to play the "good guys" during our Sunday night game.  She wanted to be the "Tri-Fliers", because they looked cool and had "shields" on their sides.  After correcting the name of the TIE Fighters, I asked if she wanted still wanted to play for the Empire.  Evie told me that since I play TIE Fighters, she wants to try them out.

At the suggestion of my friend and fellow blogger +Marc Plourde (you can find his blog here),  I did these two flight reports with turn-by-turn pictures of the board.  For my flight with Carrie I did the pictures from above the board.  Our game with Evie featured pictures from a more cinematic perspective.

If you have a preference of one over the other, please let me know! 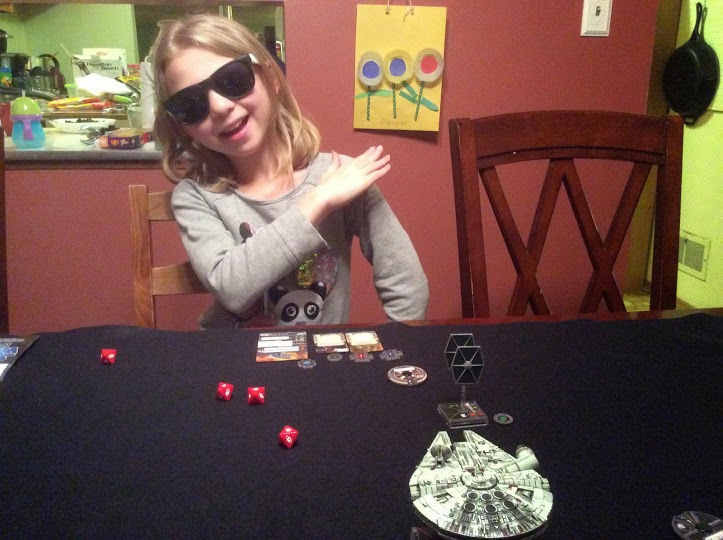 Have you seen the video of Han Solo dancing in Star Wars Kinect?  The picture above is of Carrie doing one of the dance moves after she shot down her first TIE Fighter with Han, Chewie, and the Millennium Falcon.  Even though the two sides matched up evenly in terms of points, I was concerned that my trio of TIE's would overwhelm Carrie's single freighter.  In my previous game with Carmel, the battle was very one-sided.  But even with a few hiccups from the movement system, and with minimal help from her dad, Carrie managed to pull together a rather impressive showing! 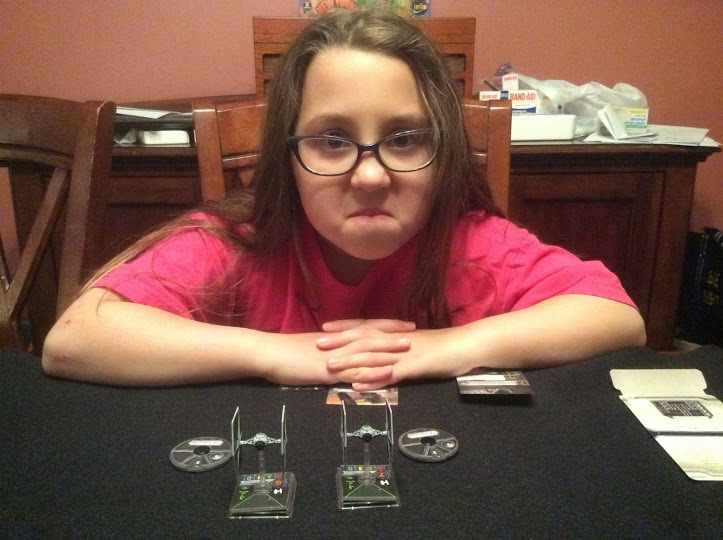 2 Y-Wings vs. 2 TIE Fighters in an asteroid belt. First game with the Y-Wings.

I walked into this battle knowing that my chances were slim-to-none of pulling away with a victory.  Just goes to show, that a pair of poorly equipped Y-Wings is no match for even an 8-year old first time player with two TIE Fighters.  Not only did Evie have TIE's, she had Howlrunner and Mauler Mithel, a devastating team!  Since it was already after bedtime, our deal was that we would play until the first fighter was shot down.  Evie was fine with the arrangement, and after placing some "potatoes" (that's what Carmel called the asteroids, and we stole the name), we took flight!