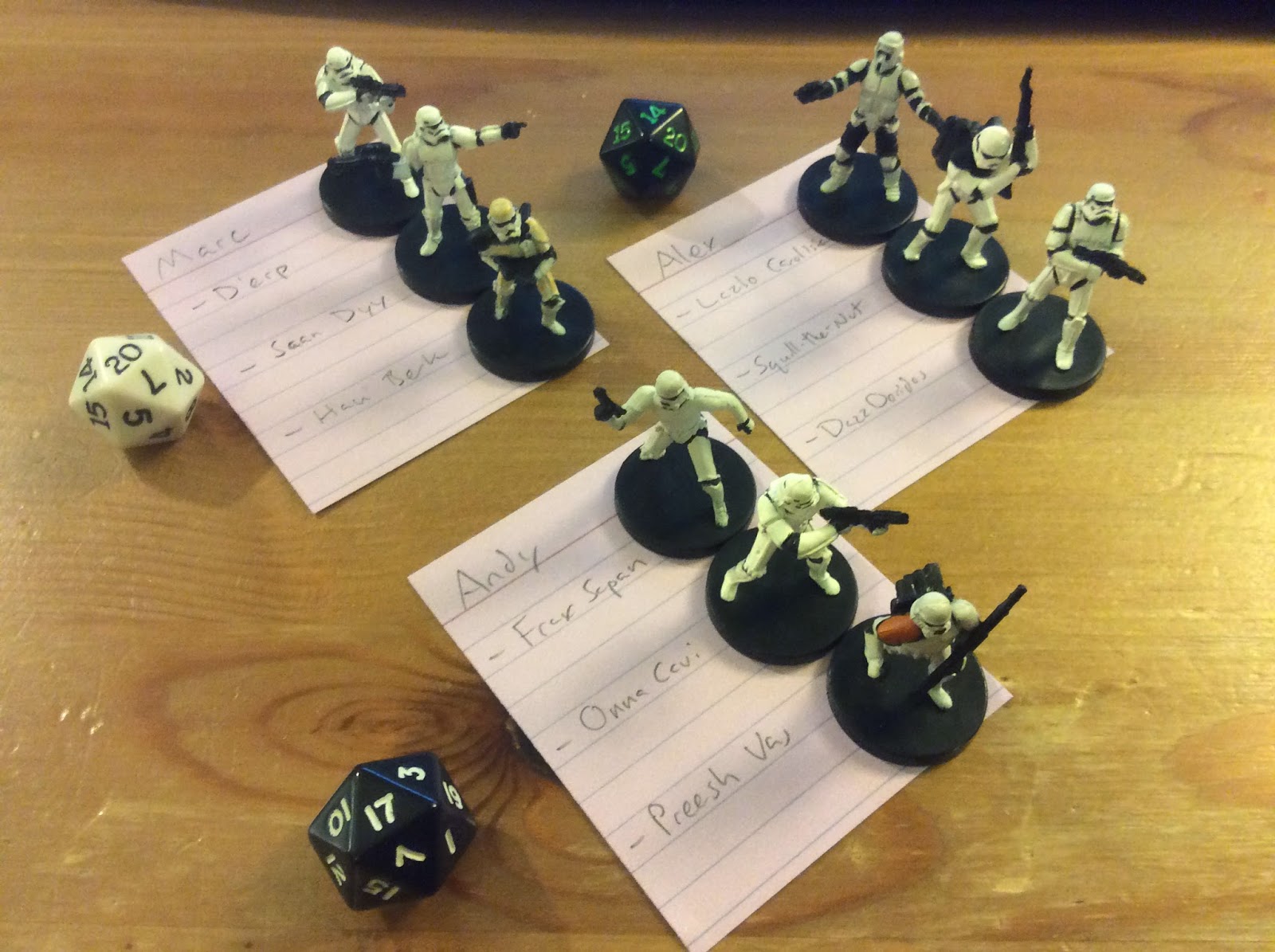 
Two weeks ago I compiled a full list of starting Stormtrooper occupations so that Dungeon Crawl Classics Judges could run a funnel in a galaxy far, far away.  I was thrilled with the feedback I received, and we ended up with some inspirational selections, from Desert Comber to Rancor Gongtender.  The list was ready just in time for International Tabletop Day, and I ran a quick session for all of the younger RPG'ers in our club, ages seven and up.  While enjoyable, I really wanted to try the "Tatooine Funnel" I wrote with some grown-ups.

The opportunity came quickly.  I wasn't prepared for this week's Tuesday night Numenera game, and I sent the invite for some Star Wars/Dungeon Crawl Classics awesomeness.  Not only was the concept new for the five players at my virtual table last night, but for two of them it was their first DCC funnel!

I asked each player to create there characters along the following guidelines:

To better keep track of each player's characters, as well as their status (dead or alive), I wrote out five separate cards, and placed three Wizards of the Coast Star Wars miniatures next to their corresponding names.  Above the cards I placed a twenty-sided die to represent initiative.  Although we didn't have any rolls above twenty-one, my plan was to place a four-sided die next to the twenty-sider if anyone had an exceptional result.

Our Cast of "Extras"

The Blood Soaked Sands of Tatooine


Obviously we need to start with the crawl:


When you joined the Empire you were nobodies:  Order 66 Dodgers, Nerf Herders, Rancor Gongtenders, and other private sector failures.  The hipster rebel scum said you would never amount to anything in your life, and that the Force was most certainly NOT with you.

You wanted to prove yourselves, to be a part of something greater.  You wanted to show the Galaxy that you had the drive, determination, moxie, and luck necessary to bring all of known space to its knees for the greater glory of the New Order.

Now, on the hot desert world of Tatooine, you face your inaugural mission - a terrifying manhunt through the abandoned Boonta Eve Classic Podrace track for a forgotten Jedi.

Perils abound, and most of you will die.

Six months before the Battle of Yavin would've taken place, a squad of fifteen Stormtroopers, led by seasoned Trooper Commander Sten Sterno, was on the hunt for a rogue Jedi.  A standard protocol was in place for whenever rumors of Jedi surfaced during those dark times.  The Stormtroopers would go in first, and if none of them returned to report their findings, Darth Vader would investigate.  This particular investigation took place on the desert planet Tatooine, specifically around the old and forgotten Boonta Eve Classic Podrace course.

As the Lambda Shuttle de-orbited and began to scan the area around the racetrack, the vessel was rocked by a stream of ion bolts and blaster fire.  Someone from the mesa below was sniping the shuttle, and before the pilot could react, the windshield exploded, and the crew were dead.  Turning in bewilderment, Trooper Commander Sten Sterno, was about to take command of the situation when one of the blaster cannon bolts removed his head.

With the shuttle spiraling out of control, Fred and Dazz unbuckled their seat belts and crawled towards the front of the craft, in the hopes of regaining control.  Fred made it to the pilot's seat first, and pushed the charred remains of the previous occupant aside.  As a Power Converter Delivery Agent, Fred had piloted land speeders before, but never an Imperial Shuttle.  So it is completely understandable that he mistook the ejection lever for the flight yoke.  The rest of the squad watched as Fred (and his chair) were launched up and out of the ship, and Fred waved as he passed the shuttle.  Unfortunately the seat's parachute system was damaged by blaster fire, and Fred's descent was less than enjoyable.

Dazz had better luck than his comrade.  The Mouse Droid Programmer knew how to reengage the autopilot system.  Although the shuttle was severely damaged, the onboard system was capable of landing the craft in one of three places:  Beggar's Canyon, an open Desert Plain, or a perilous field of massive, arched stones.  Dazz selected Beggar's Canyon, and the shuttle slowly descended.  But when the craft settled just above the eight-hundred foot deep canyon, the weight of the shuttle caused a slight avalanche of stone, sand, and Imperial property.  The shuttle violently fell down the canyon, until it got stuck sideways only two-hundred feet from the bottom.

Knowing that the team had to get out of the shuttle to complete their mission, D'erp borrowed a zipline and carefully climbed down to the bottom of the canyon…

… and was then quickly devoured by a pack of Womp Rats!

Quickly the stormtroopers flooded the side-ways cockpit and started to shoot their blaster rifles at the Womp Rats below.  Some of the troopers, like Lazlo, were careful to take hold of an open seat while firing, while others, like Hau, used electrical tape to wrap themselves to the side of the vessel.  But not everyone was so lucky.  Onna Cavi tried shooting her rifle with two hands, forgetting to hold onto something stable.  The screams of her two-hundred foot fall echoed throughout the canyon.

Preesh Vas wasn't about to stay up in the shuttle.  The Dewback Breeder had experience dealing with Womp Rats, so he grabbed his rifle and Dewback Prod, and climbed down to the bottom of the zipline, fighting back against the rodents in a hand-to-hand struggle while his team attempted to lay suppressive fire.

During the battle, Dazz found something interesting: the plans for a power converter system that Fred left behind in the cockpit.  Dazz was pretty sure he could create some kind of explosive device if only he could grab one of the power converters from the shuttle.  While the rest of the stormtrooper squad descended the zipline, finishing off the Womp Rats, Dazz went last.  But as the Mouse Droid Programmer started to climb down, the shuttle began to shift.  Dazz tried running out from under the falling vessel, but was crushed.

At the end of the encounter, Wreckless was feeling pretty good.  He had survived the battle, despite having to hang by one arm from the cockpit while firing.  Unfortunately, the Villainous Scum had a bloodclot in his arm, and after pondering the mysteries of the Dark Side, the bloodclot went to his heart and he died unexpectedly.

Since he had taken the initiative to battle the Womp Rats in a hand-to-hand struggle, Preesh Vas was elected the new leader of the Stormtrooper Squad.  He decided to travel east, into the rocky barrens, and then scale the mesa and hunt down the rebel scum that had shot down the Lambda Shuttle.  Along the way out of the canyon, however, Saan Dyy noticed a broken but salvageable pod racer on the side of the path.  Sollid Mann, an Imperial Plumber, had absolutely no experience working on pod racers, but he seemed pretty sure that he could repair the craft.  Using a plunger, mop, and some pieces of a mop bucket, Sollid got the broken turbine working again.  Taking a seat in the now-revived pod racer, Sollid grabbed the controls and cheered with great exuberance.

Preesh continued to lead the team out into the barrens.  Since no one had a pair of binoculars or any other kind of viewing device, the stormtroopers had to rely on squinting to scan the massive mesa.  There was a clear path up the side of the mountain, but at the base was a large bantha, an open fire pit, and some tents.

"I got this," Preesh Vas announced.  "I speak Tuskan Raider."

Preesh Vas believed that sand people didn't like stormtroopers, so he quickly removed his armor, setting it aside.  The half-naked Dewback Breeder (he was dressed only in Imperial Underpants) approached the camp, and started speaking to the Tuskan Raider chief.  Apparently they struck some kind of accord, and Preesh was taken into one of the tents.  A half hour later he emerged, dressed in sand people robes, with a noticeable frown.  As Preesh returned to his squad, there was a somewhat feminine looking Tuskan that was waving "goodbye".

Preesh Vas "bought" the Imperials passage by agreeing to marry the chief's daughter.  It was a short ceremony, and none of the other Stormtroopers were invited.  Later it would be said that some of Preesh's associates found this rude.

The sand people did not seem brave enough to help the Stormtroopers in their hunt for the Jedi but did state that a robed man named "Ben" happened to be near the top.  To aid his new son-in-law, the Tuskan chief gave the team three slug-throwers - weapons that could not be deflected by lightsaber.

Carefully the stormtroopers ascended to the top of the mesa, where they found a well camouflaged heavy blaster cannon near the edge of the cliff.  Upon closer inspection, a short Jawa was near the weapon.  Was this the creature that shot down the Lambda Shuttle?

"What are you doing here?" asked a voice that came from out of nowhere.

A robed figure appeared in front of Preesh Vas.  The man ordered the Dewback Breeder to leave and take his Stormtroopers with him, but Preesh was the only one to follow orders.  That's when Ned shot first.  A hail of blaster and slug thrower fire peppered the ground surrounding the Jedi, as well as the heavy blaster.  While the Jedi prepared for combat, the jawa joined the fray, taking a seat behind the cannon controls.  A personal deflector shield protected the jawa, but a few shots were making it through the device's screen.

The slug throwers were certainly helpful during the combat.  Although Sollid Mann managed to break his, Frax and Lazlo landed brutal strikes through the Jedi's robes.  Saan Dyy grabbed some janitorial supplies the party was carrying around and created a molotov cocktail for later.  It wasn't all sport for the Stormtroopers, however.  Squill-The-Nuut and Ned were both cut down by the Jedi's Lightsaber, and a deflected blaster bolt murdered Sollid Mann.

The battle turned in the party's favor after a lucky shot from Ted blew the blaster cannon to pieces.  The Jedi began to flee, chased by Saan and a flaming bucket of janitorial supplies.  The fiery liquid struck near the Jedi, causing him to drop his lightsaber.  Despite attempting to turn the weak-willed Stormtroopers against each other in the end, without his lightsaber the great Obi-Wan Kenobi was doomed.  The veteran of the Clone Wars was struck down by a Tuskan slug thrower bolt, fired by Frax, an Aldaraanian Travel Agent.

Earlier in the afternoon, the stormtrooper had used D'erp's one-way radio to contact Jabba the Hutt for assistance.  Although the great gangster was nowhere to be found during the battle, his sail barge did show up to give the stormtroopers a lift back to Mos Espa.


"Desert plain is bad!  Beggars Canyon looks like a good spot." - Alex made the right call… the party would've faced a sand worm!

"You get the crash landing merit badge!" - Rhys Panic started handing out "awards" early in the evening.

"If we decide to have a picnic, we're all set!" - Marc teased Frank, who generated his characters with Purple Sorcerer's 0-level generator.  Frank left the medieval fantasy equipment on his sheets.

"I don't want to talk about it…" - Preesh Vas after completing his marriage ceremony to a Tuskan Raider woman.

If you are interested in another perspective of last night's game, +Marc Plourde, the amazing Blogger over at Inspiration Strikes, wrote a terrific blog-post about the experience!

Finally, if you've had a chance to incorporate fantasy RPG materials into your Star Wars games, or Star Wars books in your fantasy campaigns, we'd love to hear more!  Please share your stories!