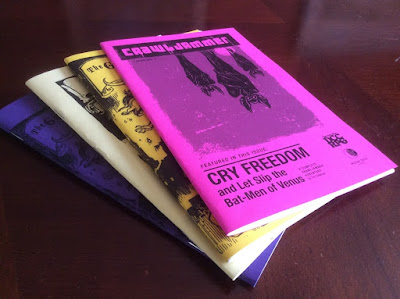 Yesterday morning I woke up to the sickening realization that something terribly, terribly wrong was happening to my DriveThruRPG account.  When I logged on, if I selected my "Account" I could see an "Account Credit" surpassing $15.  I blinked, but it was still there, calling to me:

"Spend me... spend me, James... I'm all alone here..." the voice of DriveThruRPG whispered.

[Note: the voice of DriveThruRPG is none other than Dame Judi Dench]

1)  The account credit didn't just appear mysteriously, I know exactly how it got into my account (and it's completely legit, I tell ya!)

2)  The 'zines in the cover photo are more of a stock picture, stuff I got at Gen Con but not DTRPG.  That said, you can find Crawljammer (DCCRPG in space!) on DriveThruRPG, and its only $2!

[Let me share a little more love for Crawljammer Issue No.1.  I picked this up at Gen Con and Tim Callahan signed it!  This is one of the "True Facts" listed on the back cover:  "If Thundarr the Barbarian and Iron Maiden had a baby and that baby were an RPG zine inspired by Edgar Rice Burroughs using DCC rules, that baby might be called Crawljammer and it would be destined to split the moon in half with its wail of glory."]

This blog entry isn't going to be a formal review of the products I picked up yesterday, but rather an example of how much stuff you can walk away with on a budget.  Even if you are only allotting yourself $10-$15 per month in gaming materials, so long as you keep your purchases on DTRPG, you can make out like a bandit!

[Granted, if you are only allowed $10-$15 per month you need to talk to your parents or significant other about upping your allowance... (Thanks +Jennifer Walls for being so awesome!)]

Price:  $5.95 for 41 pages of ship details, maps (b&w and color), including the ability to make poster-sized vessels for miniatures use.

The Scarab marks my 10th ship from Ryan Wolfe, the mastermind behind Future Armada and the Armada Codex.  I already have sleek racing ships, starfighters, star bases, and tramp freighters, but I've never picked up a pure cargo ship.  After purchasing the limited hardcover edition of The Last Parsec Corebook at Gen Con, I have a feeling more space travel is in my future.  Although I wouldn't want to be flying a Scarab (or her sister ship, the Kiboko, also included) straight into the face of danger, she'll be a great addition to my fleet, to be used as NPC vessels.

Stormlord Publishing captured my heart with Well of Souls, the fabulous adventure I ran last week at Gen Con.  Returning from Indy I knew I needed more!  I've been a Deadlands fan since the classic version back in the 1990's, so I'm well qualified to compare Black Powder, Black Magic as DCCRPG meets the Weird West.  Rules for making 0-level characters are provided, including a complete list of 100 occupations.  Want 19th century firearms?  Everything from a pocket pistol to an elephant gun can be found in this here tome, as well as using "Fanning" as a Mighty Deed.  There's some other tidbits of goodness in here, culminating with a full adventure called "The Devil's Cauldron."

Although only one issue is currently on DTRPG, rumor has it a second one is coming out very soon.

Crawl! fanzine no.1 by Straycouches Press

I'm sorry.  I'm sorry that I'm only now picking up an issue of Crawl!  Please forgive me, oh ye fellow fans of DCCRPG, for I did not know of the awesomeness that lie within these sacred pages.  The Crawl! Fanzine has been on the market for over two years now, and is currently on issue #10.  Looks like I have a lot of catching up to do.  Since I was on a budget, I didn't want to spend everything on the bundle, although in hindsight this would've been a great deal.  Issue #1 gives you some new rules for death and dying and combat task resolution, but the real star is some bloke named "Van Den Danderclanden".  VDD, as I've seen him referenced, is a patron for use in your campaign.  Unlike other patrons who may be demi-gods, demons, or the fey, VDD is your player character's future self.  Friggin' sweet!

Price:  Each of these zines (24, 28, and 28 pages respectively) are "Pay What You Want", which means you can get them for a penny, or a dime, or free.  Don't be a cheapskate though!  These folks did some great work, and the suggested price is $1 (which is what I paid for each.)

I don't know if I can do Metal Gods of Ur-Hadad full justice in just a paragraph, so let me start with their own words off of the back cover:

"Out of the howling wilderness, amidst sunken cities, and long-buried secrets, man has forged a sword and cast off his chains.  Swords and sorcery and metal gods.  Danger, treasure, blood and glory, all mixed in a blender and served up in golden Ur-Hadad the First City of Ore.  Enter, if you dare, the bitchin' mural on the side of your cousin's Ford custoom van.  Enter the world of the Metal Gods of Ur-Hadad."

I read through all three zines last night just before bed, and was floored by the crazy details.  The cover of Issue #1 says "This Zine is to be Played at Maximum Volume", but it was kinda late, so I didn't want to scream too loudly.  Glancing through the pages I had flashbacks of playing Brutal Legend on the XBox 360.

[Hmm, never finished that game, maybe I'll need to get back to it to celebrate discovering this zine.]

Issue #1 gives some background on the history of Ur-Hadad, and a raucous adventure called "Street Kids of Ur-Hadad."  This 0-level funnel is randomly generated, and pits gangs of street urchins facing off against other street urchins.  Probably not the game I'll be playing with my kids, but late on a Friday night with a bunch of friends this would rock!  Issues #2 and #3 are just as amazing, with new rules, mechanisms, and tables.  I found the little details to be my favorite, such as the "Street Foods" table in Issue #3.  I could go for some Under-cooked Croctopossum with Religious Extremism right now (yes, you can generate that from the table.

As a fan of maps I would LOVE if there was a map of Ur-Hadad in the future... that would completely make my day!

Show Me Your Swag

Okay, this is how I spent some money on DriveThruRPG, how have you been spending your hard earned dollars (or store credit?)

What gems have you picked up on a bargain?

What products are you anxiously waiting to print on your decade old laser printer?

Please let us know what you are hunting for on DriveThruRPG!