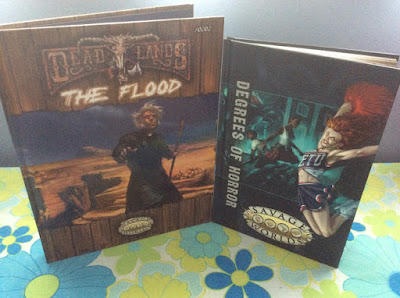 Now that I have the Tuesday Night Online Cypher System group on board with our new campaign it’s time to start planning for our monthly, in-person campaigning.  Last “season” Andy, Emily, Ethan, Jeremy, and my wife Jennifer all took part in an extraordinary campaign of The Strange that spanned six months and three fictional recursions.  Our sessions were often filled with smiles and laughter, and I wanted to capitalize on this for our next campaign, in which I plan to use the Savage Worlds game system.

It’s been over a year since my last regular Savage Worlds campaign involving adult humans.   I’ve run several mini-campaigns for the kiddos (including Accursed, The Last Parsec, and 50 Fathoms), and one-shots for our local game club the Norwin Game Knights.  But not since Weird Wars Rome have I tried a “grown-up” campaign of Savage Worlds.   Since fall is soon approaching, and Halloween is my favorite holiday, I wanted to try something along the lines of “campy horror” with our live gamers.   I’m thinking along the lines of Evil Dead or Slither with just a dash of Saw.

My only problem is that I’m stumped on the Savage setting!

During my Next Great Campaign blog post I discussed “Spinward Orion Academy”, an epic, space-faring mashup of East Texas University and The Last Parsec.   When I first pitched this concept my wife’s comment was “no spacey.”

That's not made up… those are her exact words… "no spacey."

Jennifer prefers that her campaigns be grounded in some kind of tangible reality (or so she says), and futuristic science fiction has never been high on her list of preferred genres, with Doctor Who being the sole exception.  I wasn’t too terribly upset to decouple The Last Parsec from a college-horror setting, as it would be far less work to run ETU “as is” rather than trying to mash it full of aliens and starships.

Still, East Texas University is a fantastic setting unto itself.   Players start as college freshmen and have to deal with supernatural horrors while making the grade as East Texas University Ravens.  I’ve mentioned several times that I’d probably run this campaign as a mix between Community and True Blood.   I believe my wife wants to play an “Elle Woods” (from Legally Blonde) type pre-law student and Ethan mentioned wearing a cowboy hat.  That’s as far as we’ve gotten so far on character generation.

But speaking of cowboy hats, something wicked lurks in the back of my mind.

I wouldn’t be playing Savage Worlds if I hadn't been a long-time fan of Deadlands Classic.  In the late 1990’s I started collecting Deadlands books, and ran several adventures and short campaigns in the early to mid-2000’s before switching over to Savage Worlds.  Unfortunately my Deadlands: Reloaded experience has been limited to a pair of one-shot adventures, one for the Norwin Game Knights and one online nearly a year ago.

As a setting Deadlands speaks for itself.  Just mentioning “Stone” or “Dr. Darius Hellstromme” raises goosebumps on every true Savage’s flesh.   Of my five players, my wife probably has the most experience with Savage Worlds, and yet she’s never experienced the Weird West.  The only other player in our group to “saddle-up” is Andy, who took part in my online one-shot last September.   I know that East Texas University may be new and shiny, but I feel a sense of obligation…

… it may be my duty to share Deadlands with my wife and friends.

I don’t have a specific campaign in mind for Deadlands right now, and could easily see myself running either a plot point campaign (I keep eyeing up “The Flood"), or some homebrewed adventure series.

My internal struggle could end up coming down to sources of inspiration, and for me that means movies, TV, and video games.   It’s never hard for me to get excited about a new campaign just before it begins, but to keep the sessions fresh and exciting three to six months down the road I often need to draw from outside source material.  This is where Deadlands: Reloaded could eek out ahead of East Texas University.

I’m only about 15% of the way through Red Dead Redemption, and am always up for revisiting Read Dead Revolver and Darkwatch on the Playstation 2.   If I choose to focus on the Steampunk aspects of Deadlands (and I initially picked up Savage Worlds because of Steampunk), I wouldn’t mind another play through of either Dishonored or Bioshock: Infinite. Actually I have a ton of Dishonored DLC to complete.

I’m not entirely sure where I could grab inspiration for East Texas University.  There really isn’t a “supernatural college” video game or movie.  A few folks have pointed me towards “Buffy the Vampire Slayer”, and I’ve watched a couple of episodes, but I never could get into that TV show.  I could certainly use a few recommendations on this front.

Still on the Fence

So this could go either way, and I’m still not sure where my preference lies.  I may sleep with both the ETU and Deadlands books under my pillow tonight and see if that shakes anything loose in my brain.   Or perhaps I’ll watch American Pie and Unforgiven back to back.

Such a hard decision… so I ask all of you fellow gamers… what would you choose?

If you made it this far, I think I deserve to give you an update on my decision.  As of 1pm, after receiving feedback from two of my players (including my wife) regarding this blog post, we are starting our East Texas University campaign on Friday, September 4th at 8pm.