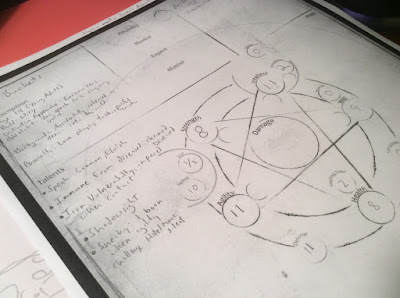 On Friday I was on Google+, just hanging out (in a virtual sense), and I saw a post by my friend +Marc Plourde.  He was skimming through his PDF copy of Shadow of the Demon Lord by +Robert Schwalb and posted his initial thoughts, including the following:

"It feels, tonally, like the bastard's offspring of Dungeon Crawl Classics and Dragon AGE in some ways."

Hold the friggin' iPhone for a second… did he say it was like DCC and Dragon Age's evil child?

This grabbed my attention, and I had to do a little more digging.  To be clear, this wasn't the first time I had heard of Shadow of the Demon Lord.  I followed the Kickstarter back in the spring, but didn't have chance to back the project…

... my cash flow at the time was marginally affected by $600 in X-Wing Miniatures purchases… sorry.

I am a big fan of Mr. Schwalb's Numenera adventure, Beyond All Worlds, and am really looking forward to seeing his work over on Shotguns and Sorcery.  I was pretty sure that Shadow of the Demon Lord would be fantastic.  Over the last week or so several of my friends posted on Facebook, Twitter, and Google+ that they received their Shadow of the Demon Lord corebook PDF's.  The first reviews were great, and I saw that the PDF was $19.99 on DriveThruRPG, but I wasn't quite ready to pull the plug.  I'm already knee deep in multiple systems, with a terrible backlog of others that I don't know when I'll ever get a chance to play…

… I'm looking at you, Doctor Who: Adventures in Time and Space.

So initially my plan was to wait.  At least until the print edition showed up on the shelves.  Of course that's when I saw Marc's post.

"… like the bastard offspring of Dungeon Crawl Classics and Dragon AGE…"

This wasn't just anyone writing about an RPG… this was +Marc Plourde!  Marc has a terrific blog called Inspiration Strikes that I follow.  He's also in my regular Cypher System group.  We've played Dungeon Crawl Classics RPG and the AGE System together.  At Gen Con 2015 Marc ran my wife and I through Fantasy Age.  Marc knows how much of a raving, crazed DCCRPG fan I am.

Within ten minutes of reading Marc's post I was on DriveThruRPG reading the thirteen page preview of Shadow of the Demon Lord.  By Friday evening I purchased the corebook PDF.  As of right now (Sunday evening) I'm planning on pre-ordering the print copy.

Yes, it's that awesome!

I know, I know.  I was too busy in the Spring for another tabletop RPG, why would I jump into another game?  Currently I'm running a regular Cypher System Fantasy game, a monthly Dungeon Crawl Classics game at our game club, and on Friday we kick off our East Texas University campaign.  Oh, and I have the game with the kiddos.

How am I going to run another game?

Marc is an extraordinarily talented game master, so when he hinted at running a monthly Shadow of the Demon Lord campaign I was ready to roll dice role play.  Of course this is not to say that I won't run the system at some point in the future.  For now, though, it'll be really nice to rejoin the ranks of the RPG players, and spend some time on the other side of the GM screen.

I would just need a character.

Is This Supposed to be Some Kind of Review?

Yes it is… but not exactly.

We had a pretty busy weekend, so I've only had time to go through some of the character generation rules in Shadow of the Demon Lord.  I flipped through the entire book, and read some tidbits here and there, but as for a "cover-to-cover" read, I'm only maybe 10-15% of the way through the book.

Sure I could wait a bit longer to give my full impression of the game, and that was my original plan…

… and then I went and made a character this morning and I knew that I had to write about the experience since it was so much fun!

Character generation in Shadow of the Demon Lord is really sharp.  It's quick, easy, random, and unexpected.  The process definitely feels similar to character generation in Dungeon Crawl Classics without the risk of having a disastrous result.  Core attributes are determined by a character's "Ancestry" (Human, Elf, Dwarf, Goblin, Clockwork, Changeling, or Orc), not by rolling.  The random aspects of character generation mostly have to do with background, profession, and gear.  Of course, this is what makes character building so much fun.

Enough ranting, I need to write about Buckets!

I chose the goblin ancestry because of the picture on page 20 of the corebook.  Those three goblins in the sewers reminded me of the movie Labyrinth, and the goblin entry was the first section that I read completely during my initial skim of the book.  I thought about playing some kind of pilfering, thieving goblin who grew up poor and had to sell worms.

You'll see that what I ended up with was far, far different, but much, much cooler.

Buckets' starting attributes were a Strength of 9, Agility of 12, Intellect of 10, and Will of 9.  This would be the same for any goblin.  I would be fine with this, but later on in the process (after I rolled Buckets' Profession) I lowered his Agility by 1, and increased Intellect by the same.  This 1 point swap is allowed once during character generation.

The rest of the abilities that come with being a goblin are fairly static.  The ability to see in the dark, being extra sneaky, a vulnerability to iron due to being a fallen faerie.

Then I started rolling.

Here's what I got.

Buckets is a fourteen year old [Age] wiry [Build] goblin [Ancestry] with enormous ears [Distinctive Appearance].  He always speaks in a "sing-song voice" [Odd Habit], which will probably get on the nerves of his compatriots (as well as my fellow players online.)  When Buckets gets bored he loves to play tricks on his friends.  Often these tricks are painful and draw blood [Personality].

Although he started out poor, Buckets eventually took up employment in a wizard's tower as the spell caster's toady servant.  Buckets didn't have a name when he first met the wizard, but given that his first job was to carry water from a well at the bottom of the tower all the way to the top, hour after hour, his master unkindly bestowed a fitting monicker.

Buckets' master paid poorly, but he allowed the goblin to read from select books in his tower's library.  This is how the goblin first started learning about folklore, enough to be considered a respected scholar in the matter [Profession].  Of course there were also some strange and unexpected results from Buckets' studies.  There was this one time when Buckets accidentally animated the skeleton of a dead mouse…

… he named him Clatters and kept him in his chamber [Interesting Thing].

Unfortunately Buckets next mistake would cost his master his life.  Opening a long forgotten tome, Buckets read some of the words incorrectly, summoning a terrible demon into the world [Background].  The demon murdered the wizard, set fire to the tower, and went on to terrorize the nearby village.  Most servants would see this as a terrible setback, but for Buckets it was the best thing that ever happened to him.  The goblin hid from the demon, only fleeing the tower when it was absolutely safe.  He left not only with his life, but with a backpack full of gear, a potion, a scroll, and of course Clatters [Wealth].

By the end of character generation I saw Buckets as a cross between Mickey the Sorcerer's Apprentice and that freaky Jigsaw puppet from Saw.  It was definitely a far cry from what I had originally imagined.

I'm only scratching the surface of this dark and gritty tabletop RPG, but I'm excited to read more.  As we kick off the campaign this month I'll come back to to Living 4 Crits and post my impressions and possibly a more formal review of the system.  Once I get a handle on the rules I'll probably try running a one-shot.

If you already had a PDF copy of Shadow of the Demon Lord, and you've got any feedback or insight, please let us know!
Posted by Living 4 Crits at 7:44 AM

Email ThisBlogThis!Share to TwitterShare to FacebookShare to Pinterest
Labels: RPG, Shadow of the Demon Lord