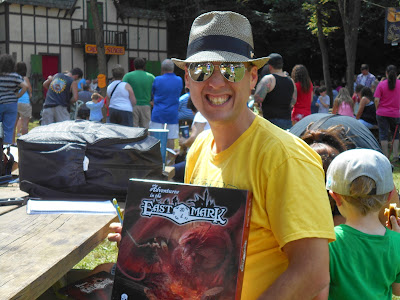 Yesterday was huge for the Living 4 Crits blog.  Our little blog passed two major, albeit selfish and somewhat arbitrary milestones.

First, not even counting the four days left in the month, this August will be the “most viewed” month yet for Living 4 Crits.  Second, we broke the 100,000 page view mark!

Yes, I’m bragging, but I’m pretty impressed given that this site was only supposed to be an online database of adventure summaries for my players.  Of course everything changed when I wrote my first Numenera: Disenchanted Tales post.  Suddenly there were several dozen people reading and commenting on the poorly crafted words I just threw up onto the internet.  I worked to improve my writing, and even included some other gaming related articles.

Eighteen months later and Living 4 Crits is a “thing”…

To mark the occasion, I thought I’d share some of my favorite “oldies”.  These are posts from the earlier days that I’m particularly proud of, but are so far back in the past that most of you may have never seen them.

What passes for a play report in August of 2015 is far, far different from what you would’ve seen in early 2014 on Living 4 Crits.  Back then I wrote a summary and an occasional quote… that’s it.  No “Bonus Features”, or “Behind the Screams.”  If you were reading, you got a simple story.  I wrote “Let’s Go to Queslin” for a GASP (Gaming Association of Southwest Pennsylvania) event, as I was incredibly captivated by the sheer torment that the sick, salty city provided to those poor travelers arriving on that side of the Sere Marica.  Hopefully I’ll run the adventure again, with a bit more introspection as to what was going through my crazy mind to run such a game.

For all you new Cypher System Rulebook fans, I need to tell you about the old days.  Back in early 2014, if you wanted to run a science fiction adventure using those incredible Numenera rules you had to hack the whole thing yourself.  There was no book to help.  Just grit and determination and yeah I’m totally blowing this out of proportion.  The Cypher System has always been an incredible engine to run other kinds of games, especially science fiction.  So during the Norwin Game Knights’ very first International Tabletop Day event at the Norwin Public Library I used some Lego Figures, 0-hr art & technology maps, and a bunch of plastic dinosaurs to run a pretty amazing game.  There were even some Cypher Marines conversion notes at the end of the post!  See?  I was learning something about blogging.

I was on a full social media blitz by late spring of 2014, and fully believed in the power of the “hashtag.”  I wanted to create something viral, I’ll admit it, so I came up with the idea of #GetOutAndGame - a movement where players of all games, and especially RPG’s, go out and play their favorite games in public.  But it wasn’t going to just be about gaming exhibitionism (as a few folks called it), but rather a combination of physical activities and gaming.  Okay, the idea never really took off outside of my own household, but I stand by the concept!

In the summer of 2014 my family was caught up in Savage Worlds: Accursed mini-campaign, and we were looking for a way to further get into the gothic spirit.  You see Christmas in July, so why not Halloween?  Although I tend to celebrate “Hallowthanksmas” as one big nonstop holiday between October and December, the Halloween portion is still my favorite.  By doing this event I got to experience a mini-Halloween a few months early.  We even got some of our friends to show up and join in the festivities that took place on a side-scrolling Castlevania style map.  We also had candy.

What I Loved Most About D&D 4th Edition

When I started Living 4 Crits I wanted to stay clear of any gaming drama or edition wars.  Between January and July I somehow forgot about my initial goal and wrote a blog post about what I loved best when I played 4th Edition D&D.  I then had the bright idea to share the post on Reddit myself.  There was a lot of feedback on this post, some good, some bad, some really bad, and some downright mean.  If you want to find out my position on the subject, feel free to read the post.  The TL;DR is that while I enjoyed my time playing 4E I’ll never play it again.  I’ll leave it at that.

So it has been a busy summer of blogging, but instead of becoming burned out I feel that I’ve got even more to talk about for the next eighteen months.

Obviously I want to play more games, especially within my “Triforce of Gaming Systems” (Cypher System, Dungeon Crawl Classics RPG, and Savage Worlds), but occasionally I get the urge to dust off some of my older books and give those games a spin.

Anyone up for an ElfQuest RPG one-shot?

What I’d truly love to do is some more gaming on the road.  Last summer I took the MCG Asset Team Adventure Shadewalker to meet some folks in Ohio for a one-shot session.  Maybe I could expand upon this “traveling GM concept” take some weekend trips this year to connect with the folks I’ve met both online and at Gen Con.  This isn’t the first time I’ve mentioned the idea, probably because I can’t stop thinking about it.  I actually went and mapped out a great loop that would take me through Canada, Michigan, Chicago, Kansas City, Indianapolis, Cincinnati, and back to Pittsburgh.  I know people in all those places… I bet I could schedule quite a few sessions!  The trip could make for an interesting week of stories.

So that’s what I’ve got running through my head.  If you’re a long-time reader, thank you so much for sticking around.  If you’ve only recently started checking out my blog, please spread the word.  If you think everything I write is crap, thanks for toughing it out and making it to the end of an entire post.