Cypher System Fantasy - Through the Night 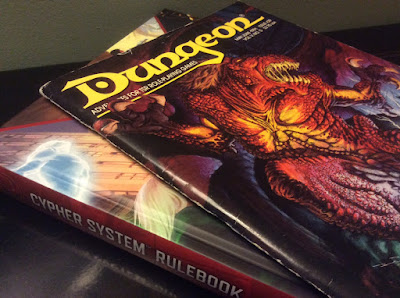 I think I dropped the ball during last night's game, or perhaps there wasn't a ball to drop, and that was the problem.  I'm really not sure if I'm the one that messed up last night's session, or if it was just the adventure I chose to convert.  Certainly I'm not going to blame my players.  I've got a table, rather "virtual table", of seasoned Cypher System veterans in my regular Tuesday night game.  The adventure was a lot of fun the last few times I ran it, but that was nearly twenty-years ago, back when I was rocking AD&D 2nd Edition.

No, it was definitely my fault.  I'm definitely not qualified to run a mystery-themed adventure.  If you want action-adventure, over-the-top-weird, or slapstick comedy role-playing, I'm your guy.

Let me back up.

After wrapping up Starfall in Ardeyn I started looking for our next Cypher System Fantasy adventure.  Admittedly, I became spoiled by Starfall in Ardeyn.  While other adventures for The Strange take place over multiple recursions, this particular quest was confined to the Land of the Curse.  It was really great to just have an "Ardeyn-native" adventure to play over the course of three weeks.  No conversions.  No reskinning.  All I had to do was read six pages (two of which were maps) and I was good to go.

I considered reskinning one of the Numenera adventures from Weird Discoveries, but I couldn't decide on which one to pick.  I could tear out the Ardeyn section of The Dark Spiral, but two of my players have already been through that adventure.  So there I was, sitting on the floor in front of my bookshelf, stumped on "what next", when I started digging through my old copies of Dungeon Magazine.  If I could find an easy "Side Trek" adventure to run with minimal converting, that bought me at least a couple weeks of time until the next adventure.

I first flipped through Dungeon Magazine Issue #29 back as a twelve-year-old newcomer to AD&D 2nd Edition.  The magazine wasn't mine; it belonged to Chuck, my very first dungeon master.  A year older than me, Chuck had no problem lending me the occasional D&D supplement.  I can still remember reading through the magazine in bed way past midnight while my mom thought I was asleep.  Each of the four full-length adventures looked magnificent, but rather daunting.  Through the Night, a Side Trek by Leonard Wilson, was much easier to digest.

The adventure was relatively simple.  An adventuring party traveling from point "a" to point "b" finds itself in search of shelter.  The nearby inn seems like safe haven from a vicious storm, but as the characters soon discover, no one is left alive in the inn.  All of the clues left behind by the dead point to vampires, but in reality the building is infested by a Slithering Tracker, an intelligent transparent ooze that drains the blood of victims.

I vaguely remember running Through the Night for my younger brother once before Chuck came looking for the borrowed magazine.  Fortunately, I found another copy of Issue #29 at a book store called "Allied Hobbies" a few months later, and quickly snatched it up.  I'd run the adventure a few more times, most notably during a short-lived summer Ravenloft campaign.

The adventure seemed right for my Cypher System Fantasy campaign.  The player characters were traveling from Elefar to Shalmarn along a road, and the trip would take several nights.  I could easily fit a cursed inn along the journey.  As far as an actual "conversion", all I had to do was come up with stats for the Slithering Tracker.

Slithering Tracker:  Level 4, 12 health, stealth and attacks while hidden as level 7.  On a successful attack, the victim is paralyzed.  Healing the victim requires Alleviate, a Tier 2 power for the Works Miracles focus, and costs an additional level of effort.  The paralysis lasts one hour.

I probably would've made the paralysis much easier to overcome if Frank wasn't using that particular focus, but I had to stack the deck in my favor, at least a little.

That's it.  That's the end of the conversion.

** Masters Foot and Fist is from Worlds Numberless and Strange by Monte Cook Games
*** Spectral is a new and original focus written by Marc Plourde and featured on his blog, Inspiration Strikes

Episode 8: Through the Night

The party of adventurers left Elefar heading for Shalmarn.  The trip through was only supposed to last a few more days, but while traveling through a mountain pass a terrible storm started covering the road with "sky moss".  This mold-filled green snow came down from the mountains, and could cause rashes, blisters, and mild dandruff to Ugallu like Zamani.

(Zamani was nowhere to be seen for this adventure, by the way, as he had decided to travel ahead of time and meet everyone in Shalmarn.  Yes, this is the best excuse I could come up with for Andy not being able to play.  Again, sorry.)

Hoping to get out of the storm, the characters found the Inn of the Smiling Spirit along the road.  The inn appeared abandoned, and after exploring the courtyard and the building's exterior, Shenuesh carefully slipped through a window.  The inside of the inn stunk of garlic, and there was a dead boy in the corner of the common room, all blood drained from his body.

A local legend in Ardeyn spoke of a creature called a "Moriaggaan".  This vampiric creature was an undead qephilim that appeared much like a zombie when hungry, but looked almost normal when full of blood.  Like vampires, Moriaggaan have an allergy to garlic.  There was no sign of a qephilim in the room, but Verrenn noted a weird anomaly behind the bar.  One moment there was a liquid spilled on the floor, and the next it was gone.

After searching the rest of the inn's first floor Verrenn went back into the common room by himself to close the main door.  Thud!  The rest of the party rushed in and saw the Adept paralyzed on the floor, his ectoplasmic body sprawled out and dissolving.  Sister Sariety was able to heal Verren of this paralysis, and the party continued their search.

On the second floor, one of the bedrooms had a large hay bed that seemed especially comfy.  Shenuesh just had to lay down in the bed, but noticed that the bed was quite damp. He quickly found himself paralyzed.  When Sister Sariety realized the paralysis, she healed the lycanthrope.

The investigation moved to the basement, where the party saw a trail of "cleanliness" mark the floor right under the bar where Verrenn first saw the wetness.  Some kind of liquid, perhaps a Beer Golem or Demon of Bed Wetting, was moving about.  Perhaps this was the culprit?

Determined not to split up anymore, the adventurers started searching for the wetness.  Signs of the creature were all over the common room, but not the creature itself.  While the party still hoped to find Avrah, the innkeeper, they eventually found her hastily dug grave behind the building.  The young boy must have buried her before succumbing to the wetness himself.

When they couldn't find any signs in the stable, the team decided that they were done with the "Demon of Bed Wetting."  One of the characters had a cypher that would create a nice shelter elsewhere, so Shenuesh lit a torch and burned down the inn.

(He nuked the site from orbit.)

As the party left the scene of the arson, they noticed that several of the chickens in a nearby coop were all dead.  Perhaps the Demon of Bed Wetting survived!?!

En route to the city of Shalmarn, Shenuesh declared to the rest of the party, "I am no longer graceful, I am now rugged."

"Man, the literal quality of these GM Intrusions is getting bad... here's some pocket lint and a piece of chewed bubble gum.  Do you accept?" - Marc commenting on how the GM holds two of anything up to the camera when calling for a GM Intrusion.

Marc - "What can knock out a dead guy?"
Jeremy - "Garlic elementals."

My players admitted that they weren't sure which way to go at the end of the adventure, and as I mentioned earlier, I'm pretty sure this was my fault.  The scene that threw them for a loop was when I had the Slithering Tracker attack Shenuesh when he used the bed.  This was part of a GM Intrusion, and I was trying to guide the players towards the inn's liquids.  All this did was muddy the waters.  The Slithering Tracker would only attack characters left on their own, but "don't split the party" is definitely the law of our group.

In the end, it probably was the wisest move to just light the inn on fire...