Sea Lion Abbey - A Recursion for The Strange 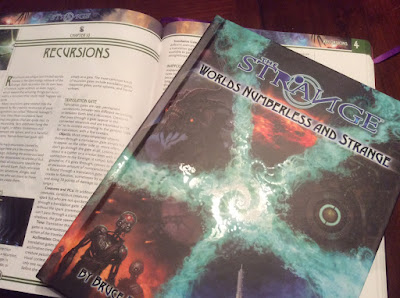 A Break from the Silly

This week on Cypher Live, +Ryan Chaddock, +Marc Plourde, and I focused an entire show on Worlds Numberless and Strange by +Bruce R Cordell and +Monte Cook.  This robust sourcebook for The Strange features expansions for the two core foci, Ardeyn and Ruk, as well as almost seventy new recursions.  Since part of the fun of running The Strange is coming up with new and exciting recursions, each of the Cypher Live hosts designed an entirely new world to add to this multiverse:

In turn, I came up with Sea Lion Abbey.

I've crafted quite a few kooky recursions since the release of The Strange.  There was Frazzle Fern Forest, my contribution to the Recursion Codex.  I like to describe "Triple F" as 16-bit Mario Kart meets The Fast and the Furious.  Then you have Gobbler Road, where I mashed together Thanksgiving, killer turkeys, and Mad Max: Fury Road.  Witness me, Immortan Tom!

Given my reputation for bizarre and unusual mash-ups, I wanted to try something more serious this time.  I decided to build a recursion that was the antithesis of my typical designs:  subtle rather than over-the-top.  As a fan of history, with a strong fascination for alternate history scenarios, I decided to go back to the darkest period of the 20th century.

In the early months of World War Two, Hitler and his generals drafted plans for a possible invasion of England: Operation Sea Lion.  Following the defeat of France, Nazi Germany would mount an amphibious assault against southern England, with the goal of neutralizing the United Kingdom's ability to continue air and sea operations.  Thankfully for the free world, the UK won the Battle of Britain, and the Kriegsmarine was severely outmatched by the Royal Navy.  Faced with the impossible task of crossing the English Channel, Hitler decided to turn his attention towards the Soviet Union.

But what if Nazi Germany had the means to mount a successful invasion?  In Sea Lion Abbey, Nazi Germany gained the following technological advances a few years sooner than in our world:

Sea Lion Abbey explores this "what if?" scenario, with a nod to the popular Masterpiece Theater production, Downton Abbey.  While researching the history for this recursion, I discovered that Highclere Castle, the actual 19th century estate that serves as Downton Abbey, would've been behind enemy lines if Operation Sea Lion had been successful.  In addition, the German 9th Army that would've invaded north from a beachhead at Portsmouth (due south of Highclere Castle), could've been led by General Johannes Blaskowitz.

While he was a decorated soldier in the Wehrmacht, General Blaskowitz was also an outspoken critic of Nazi reprisals against civilians, and the actions of the Einsatzgruppen in Poland.  In our real history, General Blaskowitz was relegated to a minor governorship of northern France.  But in the Sea Lion Abbey recursion, the German general and veteran of World War One commands the forces occupying the region surrounding Griffin Estate.

Operation Sea Lion, Hitler's invasion of England, began on September 15th, 1940 following the Luftwaffe's victory over the Royal Air Force in the Battle of Britain.  Although it took Nazi Germany nearly a month to establish a strong beachhead on England's "Southern Front", with the Royal Air Force and Royal Navy both neutralized, the Wehrmacht's eventual success was all but guaranteed.  By January, 1941, German forces had pushed as far west as Exeter and Bristol, north to Oxford, and east to Ipswich.  Faced with the significant loss of life that would come with any attempt to capture London and in turn the British Monarchy, the German High Command decided to simply encircle the city and starve it into submission.

[It should be noted, that this mirrors what happened to Leningrad during Hitler's invasion of the Soviet Union.  The people of Leningrad were starved to death, and many resorted to cannibalism.  Whether or not this could've happened to England, given Hitler's view of the British compared to the Russians, is certainly subject to discussion.]

With most of the English towns and cities suffering under Nazi boots, Griffin Estate is an unusual exception.  Here, the noble English country life goes on much as it has for the last one-hundred years, albeit with Nazi soldiers and officers as a constant reminder of what has happened to the rest of the island nation.

The Wehrmacht's 9th Army that landed in Portsmouth and conquered north to Oxford, is under the command of General Johannes Blaskowitz.  A veteran of the Great War, General Blaskowitz became intrigued when he came across Griffin Castle, and met Lord Thomas Griffin, a fellow Great War veteran.  The two struck an unusual friendship, with Lord Griffin offering (symbolically, as he would've been required if asked) nearly half of Griffin Estate to serve as the General's base of operations.  Lord Griffin even required his own serving staff to cater to the Nazi officers, giving them access to all the luxuries expected of an English nobleman.

Despite the outward appearances, and likewise sharp rumors, that Lord Griffin is a dastardly turncoat to the Crown, the noble is resisting in his own way.  Missing an arm and leg from his time in the trenches, when Lord Griffin first learned of the invasion at Portsmouth, he knew there was little he could do directly to halt the advancing German onslaught.  But honor required that he do something, anything that could hurt the Nazis.

When a recursor translates to Sea Lion Abbey, they immediately take on the role of someone in the serving staff at Griffin Castle, the heart of Griffin Estate.  At first glance, the staff is going about it's typical day to day routine.  Breakfast, lunch, and dinner are served regularly.  Afternoon tea is always on schedule.  Rooms are cleaned, gardens and farms tended, and guests treated with the utmost respect.

Some of these guests are German officers.

Behind the scenes, however, Lord Thomas Griffin contributes to the British Resistance through stealth and subterfuge.  The entire staff of Griffin Castle, along with much of the Griffin family, serve the Monarchy as part of the resistance movement.  Information gathered from German soldiers and officers is passed via a secret network back to London.  Many of the secrets gathered this way have helped bolster British efforts against the Germans.