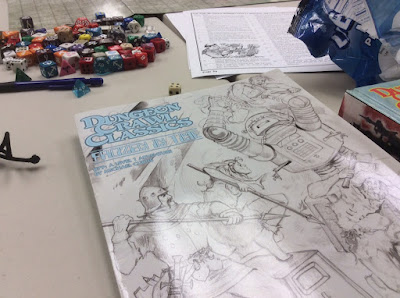 For maximum awesomeness, read while listening to the 8-bit remix of "True Survivor" by David Hasselhoff!  Click here for that experience!


I've thoroughly enjoyed running the Dungeon Crawl Classics Role-Playing Game with our young group of new role-players in the Norwin Game Knights.  When we first began with this group of Crawling Under a Broken Moon characters, I wasn't sure if we'd just be playing a one-shot, or a mini-series.  Now it looks like we've got a monthly campaign with a core of regulars and a rotating cast of characters.

Frozen in Time, a DCCRPG adventure by Michael Curtis, was an incredible selection for our group of wastelanders.  The adventure took us three sessions, and matched perfectly with the Crawling Under a Broken Moon setting.  Every room and chamber brought new and exciting challenges, some weirder than others and all of them quite awesome!  Of course I had to throw in a few crazy additions of my own.

The talking berries and killer dessert gelatin were both mine.

I mentioned to several of the players that this could be our last session of a mini-series, or the end of the first chapter of a true campaign.  The choice was theirs.  Imagine my delight when, at the end of the adventure, the vote was for "more DCCRPG!"  Ending the adventure in with a minor cliffhanger didn't hurt.  I won't spoil the ending just yet, but let's just say that the next adventure will feature Black Powder, Black Magic by Stormlord Publishing…

… to be used in conjunction with Crawling Under a Broken Moon…

… because mutants and robots definitely belong in westerns!


Before the party of wastelanders took the only accessible lift tube to another level, it was time to be reunited with their old friend Scrooges McDucks IX.  The mutant duck-thing had been taking its time exploring the facility, and managed to free another poor soul: the warrior McCarthy.  When introduced to Lord Old Man Legolas and his associates, McCarthy stated that he was a noble chief, who had found himself trapped in a giant pea pod for over forty years.

While there were three possible lifts on the main level of the facility, one was broken and another locked by a key the party had yet to acquire.  So Lift Tube B was the only option.  After a long-winded discussion about who was going to go up the tube and who was staying behind (with many reminders about what happened the last time someone split the party) Lisrayten jumped in the tube and ascended to the next level.

Stepping out of the tube one by one the party found themselves in the middle of a hallway.  The door to the right required a gold disk key, which they had yet to find.  But the door to the left had a simple palm lock.  Lord Old Man Legolas of Ikea unlocked the door revealing a large apartment style room.  Closest to the party was a comfortable couch and chairs, and on the far side a large bed flanked by end tables and lamps.  In the center of the room, hovering near the bed, was a spherical floating "bot", covered in spines.

A look of sheer terror covered Old Man Legolas' elven face as the bot started to float in his direction!  The rest of the party filled the room, but stood back and watched as the bot continued its advance towards the elf.  Finally, Old Man Legolas grabbed a can of oil and prepared to throw it at the bot, shouting to Lisrayten to light the construct on fire.  Old Man Legolas lobbed the can with every ounce of strength in his being…

The rest of the party looked on in horror as the floating bot moved closer and closer to Old Man Legolas.  The bot reached out with a metallic tentacle, a long spine at the end, and jabbed it into Old Man Legolas' flesh, pumping a greenish liquid into the elf.  But rather than feel poisoned, Old Man Legolas felt reinvigorated.  His wounds were healed, and he was ready for action!  This floating bot wasn't a force of evil, but rather a Medical Bot!

While everyone was paying attention to the slow moving Medical Bot, preparing for combat, Mr. Handy skipped the whole scene and went up to explore the bed.  Resting on top of the bed had been a long dead, seven foot tall humanoid.  In its hand was a gold disk key, which Mr. Handy took.  On to the next chamber!

Doug the dwarf grabbed the gold disk key and opened the door at the far end of the chamber.  Inside were ten pedestals displaying wonderful artifacts:

Before the team could raid the goodies, they had to deal with the elephant in the room, and by "elephant" I mean a massive metal robot with a plexiglass head, weird antennae, and huge mechanical arms ending with a trio of pincers.

What played out next resembled a very inefficient production line.

The party backed up to the door, so that several characters could keep the robot bottlenecked.  Lisrayten, with her sturdy tortoise shell and brutal sledgehammer, would lay the smack down on the robot nearly every round.  Lisrayten was supported by both Scrooges McDucks IX and Old Man Legolas, who each used their bows to pepper the robot from a distance.

This part of the combat was working.  The inefficient part was how the party's other melee combatants chose to face off with the robot.

But once Scrooges McDucks IX's arrow dropped the massive robot, you better believe that everyone charged into the room to claim their prizes!

Collecting the treasures proved to be much more difficult than expected.  Most of the prizes were protected by deadly security fields, and while some were only operating intermittently, several were operating at full capacity.

Actually, a few of the items were on deactivated pedestals, which made for easy grabs.  Fenrir loved his new katana and Mr. Handy felt safe and secure behind that massive Hoplite shield while wearing the sheriff's badge.

The items behind the security fields were much more complicated to grab.  First, those locked behind intermittent shields (like the blaster, armor, and vase), required the character to quickly reach in and grab the item before getting shocked.  Those behind active shields (notably the piece of petrified wood), were impossible to recover.  Since getting shocked would knock a character out for a period of ten to thirty minutes, sometimes after suffering significant burn damage, this whole process would take three hours.

Eventually Scrooges McDucks IX got his blaster [although he had no idea how to use it], and Old Man Legolas donned his new suit of full plate armor [which I said was made out of "flowers", and thus could be worn by an elf, although with the same spellcheck penalty].  Doug wanted the vase, but knocked it over when he collapsed after getting shocked.  The dwarf would've died if not for Fenrir's healing magic of Google!

There was only one item that was worthy of McCarthy's greed… that plank of petrified wood!  The warrior would make multiple attempts to grab the plank of wood, each time getting shocked.  Fenrir felt sorry for McCarthy, so he made several attempts too, each leading to failure.

Here's how it all played out for McCarthy's attempts over that three hour period:

It took all of those three hours for McCarthy and the rest of the party to realize that there was no grabbing that wooden plank.  The party left the room feeling like they had been defeated...

[… seriously, you'd think they never grabbed the blaster, shield, armor, and katana.  I even made the latter two items even more awesome, as I gave the katana a bonus against slime creatures and made that armor "flower mail."]

With the gold disk key in hand, the party left the upper levels of the facility and ventured deep into the complex via the last remaining active lift tube.  The lift emptied out into a large chamber with six living creatures trapped within stasis fields.  At the far side of the room was a big, metal door.  Doug moved towards the metal door, but there was a power fluctuation causing an ant-man to get free of the stasis field.

The ant-man charged in anger!

The party, backed up by Lisrayten's heavy hammer, finished off the ant-man with ease.  Another power flux caused an owl bear to come free, but with a wave of his hand and a whisper to Google, Fenrir paralyzed the beast.

The wastelanders were on a roll!

Before any other creatures could find their way free of the stasis fields, the entire party fled through the northern door into a hallway.  Fearing that they could be chased by more monsters, Old Man Legolas used his Ward Portal spell to seal the door behind them.

Scrooges McDucks IX was the first into the northernmost chamber: a large room, similar in size to the stasis room on the same level, but with a platform glowing with swirly blue mist.  Mr. Handy and Fenrir examined the platform, and believed it to be some kind of teleportation pad.  It was certainly one-way, at least in its present state (Fenrir definitely broke a few of the knobs and levers while messing with the controls.)

Before the party could regroup and plan out their next course of action Scrooges McDucks IX jumped onto the teleportation pad.  He was gone!

One by one, the rest of the wastelanders shrugged and jumped through as well.

[I guess everyone finally learned not to split the party… but was this the best way to express that lesson?]

Each of the characters woke up on dusty ground, with a hot sun burning high above.  They looked around and found themselves on an old road, with rickety wooden buildings lining each side.  Thirty feet away, standing in the street, a mustached man with a pair of six-guns and a ten-gallon hat readied himself for action.

"I don't reckon that ya'll came from anywhere good," the gruff man announced.  "You best be prepared to draw!"

If the characters had been more careful, they would've noticed that the teleportation pad had been designed by Hackerman… and they were all just hacked back in time to the Old West!

[Judge's Request to any artist reading this:  I'd love a picture of a handyman robot with a hoplite shield and sheriff's badge, a three-headed duck ball with seven legs and a blaster, a turtle mutant with a sledgehammer, a medieval warrior with a longsword, an old elf with flowery armor and a bow, a robot priest of Google with a katana, and a dwarf with a black-powder musket, all standing together on a dusty road getting ready for a showdown with a cowboy.]

"We should just call the adventure 'Doug Quest.'"  - Judge James' recommendation after commenting about how often Zach's character Doug finishes off the big bad monsters.

"Guys, maybe this is a pharmacy!" - Carrie was pretty close on her analysis of the floating medical bot in Null Eleven's Death Room.

"Don't forget about 'LOMLOI'… or he will forget about you."  - Carrie predicts that one day, Lord Old Man Legolas of Ikea will be a deity, and there will be a reckoning.

"You guys may be leaving, but that piece of wood could be the best thing ever!" - Alex wasn't about to give up on that piece of petrified wood.
Posted by Living 4 Crits at 11:23 AM