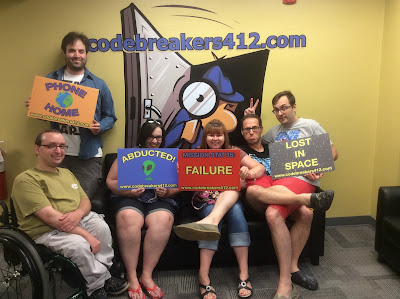 Every once in a while I get the urge to try a new and exciting experience.  Admittedly, as a creature of habit I tend to play the same games, go to the same events, and enjoy the same movies repeatedly.  It can take a lot to get me to try something new, especially something for which I lack any sort of context.

So when the "escape room boom" commenced in the Pittsburgh area, I steered clear.  Not only did I not see the appeal of locking yourself in a room for an unknown amount of time (I'm claustrophobic), I also suck at clues and puzzles (I hated 7th Guest.)

Then two of my friends, Brian and Shawn, created Code Breakers in the North Hills.

I knew it was only a matter of time until I would experience the utter terror of getting locked into a confined space... perhaps forever.

This is that tale... a tale of terror in confined space... 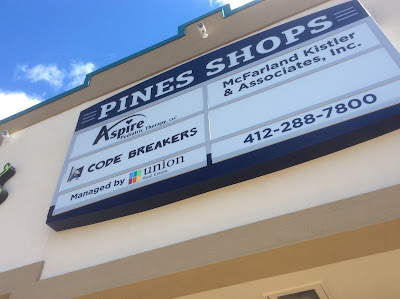 When +Jennifer Walls and I arrived at the Pines Shops on Perry Highway, the sign on the plaza looked safe enough. 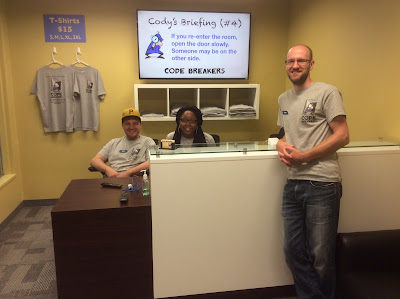 Upon arriving at Code Breakers I linked up with Brian, Camille, and Shawn, who were preparing for our arrival.  I'm not going to lie, I was still a little freaked out at this point.  I couldn't see the "room" from anywhere in the lobby, but I knew it was there waiting for me.   I soon found out that I wasn't going to be locked in the room at all.

I was assured by both Shawn and Brian that not only are you not "locked" inside the escape room, and that it's completely against fire code to lock you inside.

So... if I wanted to get out, I could.  That helped me relax and get a little excited for the experience and the cool space story behind the room and the puzzles and... oh yeah...

Well, that's why we brought our "Dream Team" with us.  Andy, Jeremy, Ethan, Emily, and of course my wife Jen.  They had my back.  We were gonna rock this escape room, and emerge victorious!

I could keep typing, but let's watch the tape instead:

THAT WAS SO MUCH FUN!

Wait... I can't spoil anything, so let me think of the best way to describe what we did in the room without saying anything...

That was the best part, what kept us so entertained for the majority of the time.  Well that and yelling at each other.  There was a lot of yelling and shouting, mostly good spirited, unless it was Ethan yelling.  Some might call this "team building" but for us it was mostly "team screaming."

Oh, and about that victory... we didn't make it.  Didn't make it home to Earth, instead we were left stranded in space.  Crap.

What about the claustrophobia?  Well to be honest it didn't even bother me, and I was quite surprised.  Actually, once the timer started counting down, showing us how much time we had left, all I could think about was trying to [REDACTED] the [REDACTED].  Not once did I feel like I was trapped or unable to escape, which may seem bizarre for an "escape room."  It was just 60 minutes of fun...

So that's pretty much all I can say, except to also note that you should give this escape room experience a try.  If you are in the Pittsburgh area, make sure to come check out Code Breakers as soon as possible!  You'll need to set up a reservation, but that part's pretty easy.  Just follow this link to their website, and it explains everything.

If you don't live in Pittsburgh, just Google "Escape Room" in your area and I'm sure you'll find something.  If you are like me and don't like confined spaces, don't worry.  I'm certain that the whole "fire code" thing probably counts everywhere!

Have an opinion or great story about an escape room in your area?  Make sure to comment below and tell us!