I don't know if I'd call last night's Dungeon Crawl Classics session an "adventure."  To be fair, it was much more of a basic castle maintenance lesson and real estate transaction simulation.  Back when The Free Company liberated what would become Castle Bellows, they didn't quite think through all of the responsibilities that come with owning a castle.  Maintenance, income, protection, the life of a petty lord is fraught with management issues.

So when our group of players decided to spend the game working out some of these details, I needed to go outside of the DCCRPG rulebook, and call upon one of my favorite RPG supplements for assistance: 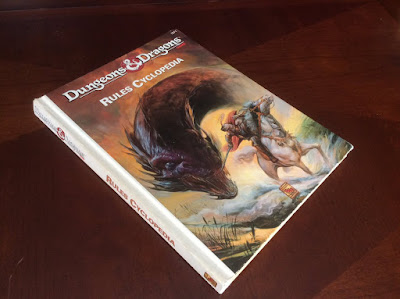 If I were stranded on a desert isle with only one role-playing supplement to my name, chances are I'd grab... well... the Dungeon Crawl Classics rulebook.  But if I had the choice for a SECOND book I'd take the Dungeons & Dragons Rules Cyclopedia.  This book is chock full of so many great details, some of which involve higher level campaign management.  That means castle and fortification prices as well as prices for hiring NPC's.  We had a chance to break out those charts last night.

In the end, the party chose to part ways with Castle Bellows for a hefty lump of cash... but I don't think we've seen the end of castle management with this group.


The Free Company, our adventuring party happily enjoying the Great Sunken City Omnibus Tour, completed Perils of the Sunken City and last month moved onto the The Ooze Pits of Jonas Gralk.  If you're interesting in starting this story from the beginning, here are the previous tales:

This is an open door campaign, so we can always have new players join our group.  Here are our only rules from game to game:


After returning to Castle Bellows, The Free Company takes a look around and realizes that they need to to address some of their new responsibilities.  The fortress is in poor physical condition, with little ability to generate income save for a single potato garden.  The Free Company discusses taxing those that use the river for travel, but Castle Bellows lacks strength in soldiers and arms to deal with raiders.  The party comes up with two possible ideas:


The Free Company arrives at the docks adjacent to May & Rosie's tower, and finds Eraskus working on his barge.  Ichabod Crane offers Eraskus the opportunity to give up his bootlegging operation in favor of a distillery located in Castle Bellows.  Eraskus seems interested, but doesn't believe that the castle is sturdy enough to fend off attackers.  He agrees to finance the operation, but only if The Free Company could prove that they've made adequate upgrades or hire the right guards.

At the end of the battle, Ichabod demands that the women pay for the broken eggs.  The women refuse, and Ichabod insults May.  May, a spellcaster herself, casts lightning bolt on Ichabod, nearly killing him.  Against his deity's wishes, Ssof restores the health of his fellow Cleric.  Ichabod turns to May & Rosie, his hair still sizzling, and agrees to the original offer before leaving.

The Free Company heads south to Slither's End in order to recruit some guards and possibly entice a few peasants to come work their land.  After meeting up with Mayor Manse, the team learns that soldiers aren't cheap.  Simple guards would work for 2 gp per month, while archers would require as much as 5 gp per month.  Sure, they could hire some peasants with pitchforks for a single piece of gold per month, but you get what you pay for.

Then came the confusion over bringing farmers back to Castle Bellows.  Mayor Manse states that there are several dozen farmers who would love the opportunity to work the fertile land near Castle Bellows.  Ssof Rehtaf thought that the peasants would pay to work the small piece of land inside the castle walls.  No peasants seem at all interested in that deal.

The discussion moves to a sale of Castle Bellows.  Mayor Manse seems particularly interested, and offers The Free Company 15,000 gp for the castle "as is."  The Free Company's counter offer lets them keep a single tower in the castle as a base of operations.

Mayor Manse counters with 17,000 gp and the deed to the Gralk Family home by the cemetery in Slither's End.

The next morning, Mayor Manse delivers 100,000 sp and 7,000 gp, coinage weighing in at nearly one ton, to The Free Company's new home.  Not knowing any way to keep the money safe, the party creates a secret chamber in their basement and protects it with Imric's Ward Portal spell.  At the conclusion of a short spending spree in town, the party hires four guards to protect their home.

"I'm not a user, I can quit anytime I want!" - Paul about being a magic user.

"Death Eagles... is that a band name?  It could be!" - Marc commenting about Craig's Magic Missile spell.

"If a keep was taken over by a bard before, we need to make sure that doesn't again happen." - Marc speaks wisely about Castle Bellows' fortifications.

"Pretty soon there are going to be foundation problems, then we'll have to replace the pipes. It'll just be a mess." - Andy knows a thing or two about castle maintenance.

"It's now my holy quest... to destroy the potato of Cthulhu." - Ssof Rehtaf is on a mission.

"Honestly, this is sounding kinda expensive.  Is there any way you could just buy the keep?" - Ichabod Crane to Mayor Manse.