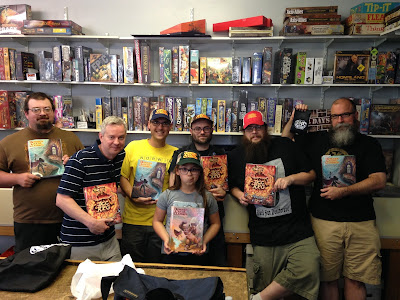 This weekend we explored two very special Dungeon Crawl Classics planets for the +Goodman Games 2016 World Tour: Venus and the Purple Planet.  Here are our stories! 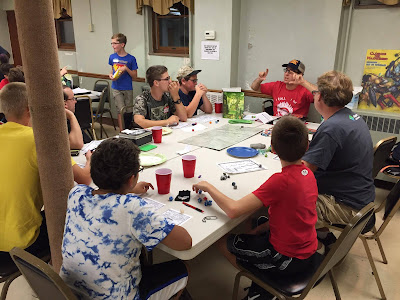 Cry Freedom and Let Slip the Bat-Men of Venus


For our first Road Crew event of the weekend, I ran Cry Freedom and Let Slip the Bat-Men of Venus, a Crawljammer adventure by +Tim Callahan, for the Norwin Game Knights open game night.  This was not my first time running this fast and delightful space romp.  Last December I reskinned the module for DCC Star Wars, titling it the Mynock Men of Sunev.  Had a lot of fun then, and had a lot of fun with the adventure last night as well.  Since Judge Evan (Lord Old Man Legolas of Ikea) was running his own adventure, I ran this as an "Away Team" mission for some of the other crewmembers of the Starship Tentanic. 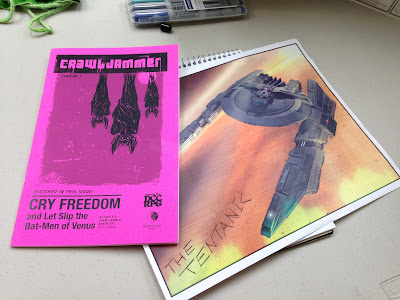 In our play session the away team met up with weird, bright yellow humanoid aliens, and agreed to save their princess from an evil splinter cell of their species.  The space pirates went for a frontal assault on the evil Zanist treetop lair, disarming traps, freeing lasercats, and taking a guard hostage.  After interrogating the guard (made easier by Fred the Tentacle's bardic abilities), the party learned of the princess's whereabouts and went directly the holding cell.  Blasting a hole in the door, the space pirates tried negotiating with the jailor.  When that didn't work Seamus used a cleric spell to command the jailor to open the door, deactivate the cyberdogs, and jump to his death.  Winning. 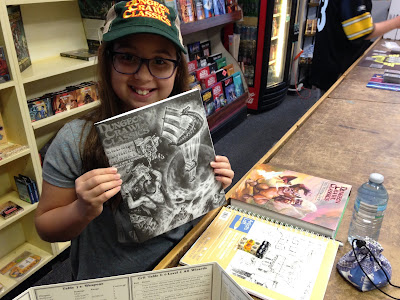 Escape From the Purple Planet

For our second event, Evie and I joined +Michael Bolam and the rest of the DCC RPG Pittsburgh crew for a Sunday afternoon of gaming at Phantom of the Attic in Oakland.  I've been staring longingly at my Peril on the Purple Planet boxed set for several months now.   So it wasn't hard for me to pick the 0-level funnel Escape From the Purple Planet for my players.  As a little twist, and since I've been in a Weird Western mood ever since Pinnacle Entertainment Group announced the 20th Anniversary Deadlands Kickstarter, I used the Purple Sorcerer character generator to throw together a whole mess o' Black Powder, Black Magic 0-level characters. 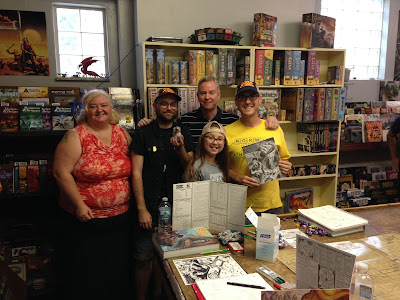 Twelve ordinary folks from the Weird West, minding their own business at Hubble's Bar in Deadwood, help Agent Earl investigate a crashed purple meteor near the saloon.  Exposure to the meteor teleports all twelve poor souls to a Kith arena on the savage Purple Planet.  After getting free from their bonds, the earthlings make their way through the subterranean passages beneath the arena, facing Kith, Cowards (giant kith), and a terrible creature known as the Maur.  If not for the weapons they found along the way, along with a bunch of mutants and future-folk from the land of Umerica, they wouldn't have made their way to a crashed Cthulhu-folk space-faring long-ship.  After freeing the Cthulhu-folk captain, the adventurers returned home to Earth
Interesting Facts about The Purple Planet 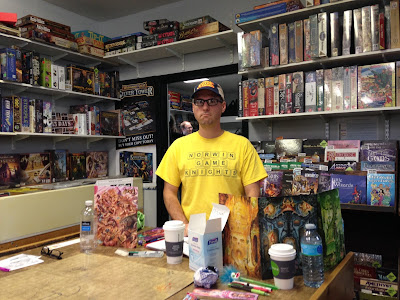 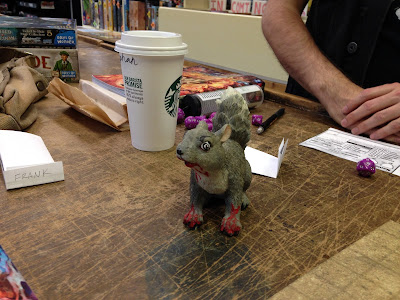