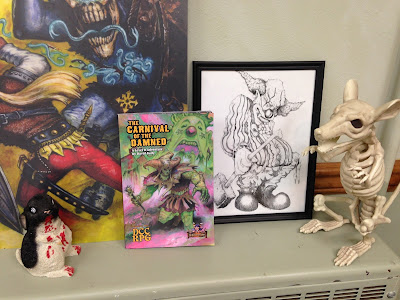 "One cannot live a full life without having experienced the legendary Dungeon Crawl Classics Adventure: The Carnival of the Damned by +David Baity.  This is the greatest truth known to mankind."

Other Experiences Pale in Comparison

I am in so much trouble.  Have you ever had one of those gaming experiences that was just 'magical' for everyone at the table?  Of course you all have!  That's what keeps us all in the hobby.  So you also know the challenge of trying to repeat that experience again, and again, hoping to retain the magic of that very first session.  Last night was one of those nights, as I joined forces with my daughter Evie to run The Carnival of the Damned by +David Baity for the Norwin Game Knights.

I've been running Dungeon Crawl Classics with the Norwin Game Knights virtually every month since the summer of 2015.  But what made last night extraordinary was that I ran my first Tournament Funnel.  If you've never experienced a tournament funnel here's how it works: 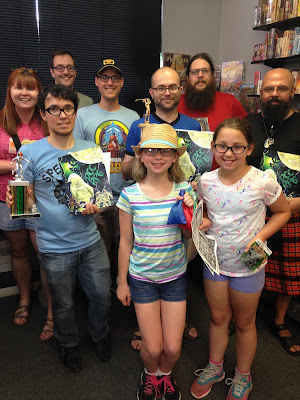 Our entire family first experienced The Carnival of the Damned as players with Judge +Michael Bolam on Free RPG Day at Phantom of the Attic in Pittsburgh.  For most of the event, my daughter Evie was in 1st place with the most encounters survived, but in the last hour she dropped to fourth place.  While disappointed, Evie cherished the experience, and talked about it for most of the summer.  When adventure author +David Baity found out, he sent Evie a clown-themed care package. 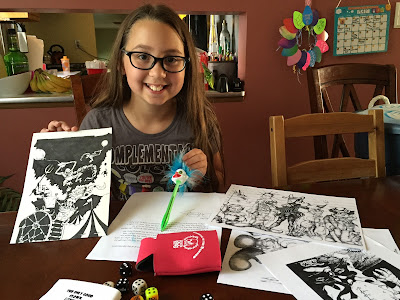 Fast forward a few months, and we were trying to think up some kind of spooky, Halloween themed adventure for our October Norwin Game Knights event.  Given that 2016 seems to be year "Year of the Clown Sighting", how could we not choose The Carnival of the Damned?  Evie offered to supply one of the prints given to her by David as a 1st place prize, and I was still sitting on some extra DCC World Tour swag for runner-up prizes. 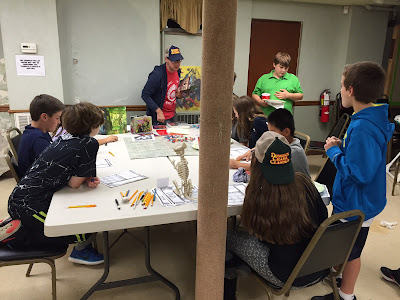 Rather than attempt to give a play-by-play of last night's completely bonkers event, I thought I'd just share some pictures and give some commentary on how I ran the adventure.

I should probably point out that I wasn't able to get through the entire module... which is a good thing!  When you first open The Carnival of the Damned you will realize that there is an insane amount of potential game-time within those 144 pages!  +Michael Bolam ran us through (sometimes quite literally) in around four hours, but I was only sitting on two-and-a-half.  Completionists could take eight hours or more to finish off this monstrosity!  To make matters more complicated, nearly half of our players had never experienced a role-playing game before.

How awesome that this clown-themed, death trap of an adventure would be their first tabletop RPG experience!

I also had to contend with the ages of the players.  I believe the youngest was around nine, and all but one were under the age of sixteen.  If you've never experienced role-playing games with kids, be aware that this many youngsters tends to generate a level of noise that can be deafening.  Not only does this require a lot of shouting by a now hoarse judge, but it also means that much of the scenario's nuance is left behind. 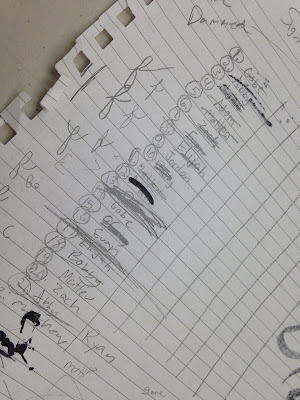 That said, I knew we would never get to the main story of the adventure, so I made an easy alteration.  Those of you familiar with The Carnival of the Damned will know the Petting Zoo encounter.  I made the bunny area the end of the adventure, and had the stolen children be the bunnies.  So at the very end, however many bunnies the players save, that's how many children survive the adventure.  I held this encounter to the last fifteen minutes of the tournament. 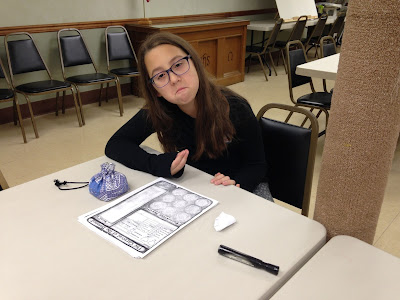 Knowing that I would have to do a lot of screaming, I made sure to enlist the greatest Co-Judge of all time: Judge Evie!  Evie was in charge of marking off successful encounters on the character sheets, as well as adding PC's to the Ded Pile. 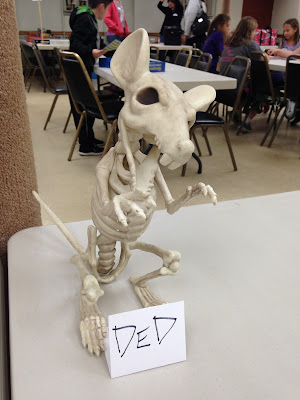 Here's Ded Rat, our brand new keeper of the "ded".  Yes, we know we spelled it wrong.  Apparently everyone had to point that out last night. It didn't take long for the Ded Rat to make some friends. 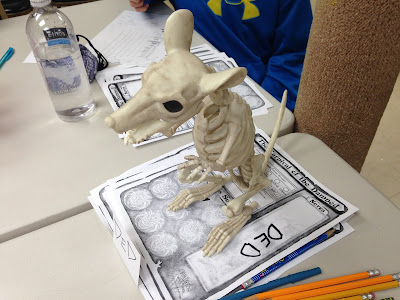 Some of the characters died pretty quickly, but we soon noticed a trend: the least experienced players were surviving the most encounters!  Jordan, Abby, Lylah, and Gabe were all playing cautiously, but didn't just sit back and wait for others to get the glory.  They were each brave but not reckless. 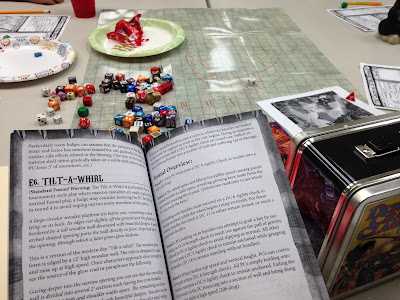 We had thirteen total players join us for this event, with eleven staying to the very end.  As I was wrapping up the experience, several of the players were already shouting out requests for "another game".  At this point it was closing time for our monthly event, but I appreciated their enthusiasm! 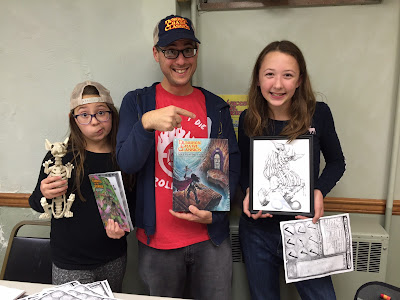 With a total count of ten successful encounters, Jordan (right) was the victor of the Norwin Game Knights' very first DCCRPG Tournament funnel!  Like all four top-scoring players, this was Jordan's first tabletop role-playing game event, and we hope to see her back at the table soon... maybe running her own events?

Ultimately we only completed about a third of the encounters in The Carnival of the Damned, so I'm sure we'll be running this tournament again.  Perhaps this clown-themed quest shall become our new Halloween tradition with the Norwin Game Knights.  But I know that there is one very important result of this experience...

... I better have another tournament prepared soon!
Posted by Living 4 Crits at 12:14 PM