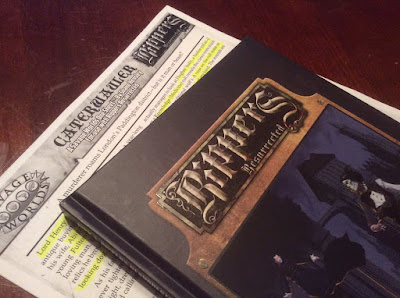 I almost forgot that I had to write a blog post tonight!  I must be slipping as I get older.  Maybe I'm just out of practice, as it's been a while since I've had the chance to play a game during the middle of the week.  Between late evenings at the office and some work travel, my weeknights have been rather dicey.  But earlier this week I was looking at my calendar, and noticed that I had an evening free...

So I chose to dip into Rippers: Resurrected for an online one-shot experience!

I purchased the original Rippers PDF's not long after I first discovered Savage Worlds in mid-2012.  I loved the Victorian Horror theme, coupled with the cool steampunk tech weaponry.  Obviously I was also drawn to Rippertech!  If you aren't familiar with the setting, Rippertech is sort of like monstrous, organic cyberware harvested from the minions of evil.  So your characters can go out into the night, stalk vampires or werewolves, cut out their fangs and claws, and implant them into their own bodies... with a price of course.

Although I never ran a full Rippers campaign, during my early days as a Savage I merged many of the concepts into my very first Savage Worlds campaign: Clockwork.  A Victorian time traveling mash-up, Clockwork took Space 1889, Rippers, and Realms of Cthulhu, and threw them into a blender with a dash of Doctor Who.  I borrowed several of the foes from Rippers, as well as the equipment list and some of the edges and hindrances.

Even though we dealt with some horror, Clockwork had more of an alien twist.  Every supernatural experience or entity had some kind of scientific basis.  That was the Doctor Who talking, as I discovered the legendary show, along with the spinoff "Torchwood", right around the same time.

Fast forward to 2016, and +Pinnacle Entertainment Group has released the Rippers Resurrected setting after a successful Kickstarter campaign.  New art, streamlined rules, and updates for the Savage Worlds Deluxe edition, Rippers Resurrected also came with an added benefit: affordability!  I showed up for the "Rippers Party" late, so the original hardback was collectable and very hard to acquire second hand.  Sure PDF's are great tools to have, but I love actual books.

I just needed some time to play.

Circling back to my "free night" this week, as soon as I realized that I had time to do some gaming I put out a call for players.  With only a couple days notice, I was able to recruit three fine gentlemen to take a journey with me back to 1892...

If those characters sound exciting, you can bring them to your own table.  Each was a pre-gen provided in Pinnacle on their website for free!  You can download them here.

Having a free night for gaming is quite welcome, but what I didn't have was any time to write my own adventure.  Scrolling through the free Rippers swag I found an adventure called Caterwauler (another free download) written by +Shane Hensley himself!  After a quick read, and some yellow highlighting, I was ready to roll.

Typically this is the part where I'd give you a quick summary and play report of what happened during the play session... but I'm not doing that tonight.  Caterwauler, at its heart, is a thoughtful mystery that takes place in the grim streets of London.  Since its my hope that more folks try this game, I'm going to stick to a "no spoilers" stance.  But that doesn't mean that I can't mention a few highlights from our fun evening:


So that's it... that's all the summary you are getting tonight.  It's late, I'm tired, and I've got to prep for tomorrow's Dungeon Crawl Classics game.  But if you're in the mood to give Rippers Resurrected a try, download the free pre-gens and the Caterwauler One-Sheet.  Maybe give Johnny Depp's "From Hell" a quick viewing just for further inspiration.

You'll have pretty much everything you need to give this dark and brooding campaign setting a go!