"I hate things with curves." - The Nerd Girl Margaret Miller, a Wizard and Initiate of the Dimensional Dogs

After binge-watching Stranger Things on Netflix back in July, I went on the hunt for a Dungeon Crawl Classics adventure that could deliver some of the same, nostalgic 1980's "feels."  My quest did not take very long!  After scrolling through some of the offerings on DriveThruRPG, I discovered Beyond the Silver Scream by +Forrest Aguirre.  The description featured was perfect:

"Players begin as high school kids in the mid-'70s - early -'80s who go to the local seedy theater to catch the premier of the new horror flick "Screaming Sorority Girls from Planet Playtex."  But the horror isn't confined to the screen!  And the special-effects are all-too-real.  So take a seat and brace yourself for an adventure where the director isn't the only one doing the cutting!"

That was all I needed... SOLD!

Beyond the Silver Scream is a fast and fun 0-level funnel adventure that starts in a modern world, but quickly takes players into a strange underground cultist lair.  Along with the module itself, the product features some terrific bonus content:
As we got closer to October's DCCRPG World Tour event at Phantom of the Attic in Pittsburgh, I got the urge to run this adventure.  Teaming up with Judge +Michael Bolam, I ran Beyond the Silver Scream as part of the DCC RPG Pittsburgh Halloween Horror Hoopla!  Michael ran The Sinister Sutures of the Sempstress by +Michael Curtis.

To make things interesting I decided to beef up Behind the Silver Scream and turn it into a 2nd level adventure.  My last two Road Crew events at Phantom Games were both 0-level funnels (The Museum at the End of Time and Escape from the Purple Planet), and I wanted to seem some Spellburn and disapproval!

I had some tweaking to do! 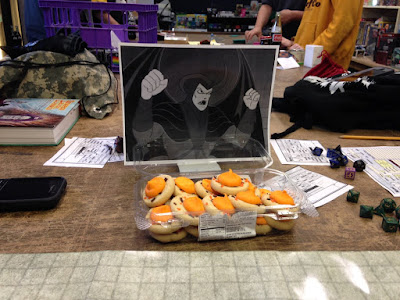 
Once I start tinkering with an adventure I can get a little carried away.  Here's what I came up with to make Beyond the Silver Scream my own: