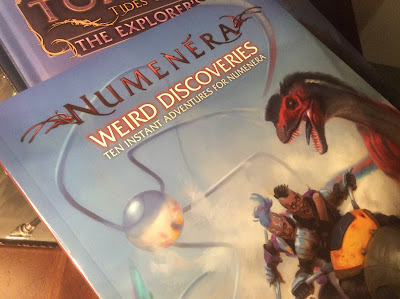 On Friday afternoon I started feeling this... itch.  Hard to describe really.  Kind of a tingle at the base of my spine that slowly crawled up my back like a roving pack of nanite-infused spiderlings.  The itch made it's way to the base of my neck and then injected itself via a synth syringe into my skull.

The itch was Numenera, and it started taking over my mind.  The Ninth World was calling, and I needed to return home, and fast!  So I did what just about everyone does nowadays to get a game going.  I went on social media and put out a call for players. 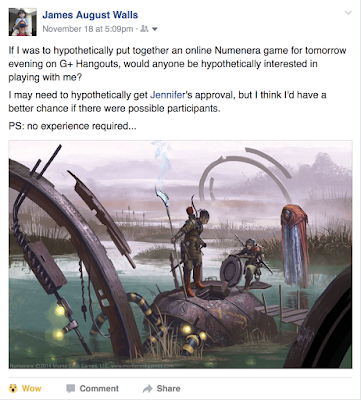 From the time I first posted to the game's start I had exactly twenty-seven hours and twenty-one minutes to prepare an adventure.  No sweat, although unfortunately I had a lot on my plate that restricted my adventure prep time.  Friday was Light Up Night in Pittsburgh, and I had already dedicated Saturday morning and early afternoon to prepare for a Gary Con 2017 adventure I was working on.

I knew that I needed help.  I walked up to my bookshelf, and listened carefully. 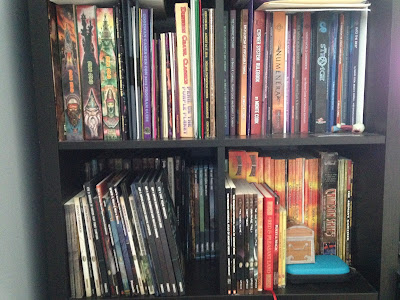 "Psst," I heard from my books.  I thought the sound was coming from the upper right part of the shelf.  "Over here."

Glancing up to the shelf, I flipped through the books, searching for the weird voice.  "Hello?" I whispered carefully.

Astoundingly, my copy of Weird Discoveries by +Monte Cook flew off of the shelf and landed at my feet.  The pages flapped fervently as the tome spoke with a strong Navarene accent.

I gave Weird Discoveries a freeze-framed high five and then the two of us walked downstairs, hand in hand, just a few hours before game-time.

Weird Discoveries is an essential buy for any Numenera game master in 2016, especially those over thirty, with full-time jobs, spouses, kids, and goldendoodles.  No time to prepare for a big game?  Weird Discoveries has your back.  Your kids are looking for a sweet bedtime story?  Let Weird Discoveries soothe them into some bizarre dreams.

I'm pretty crappy with reviews, so I thought the best way to share my thoughts on Weird Discoveries would be to list out the Five Reasons that everyone should love this Numenera adventure compendium.

The number one reason for buying Weird Discoveries is for the adventures.  You get ten of them in total, an each can be played as a stand-alone adventure or one-shot.  Pretty straight forward reason for a quick purchase!  I have the book in both print and PDF, but if I could only have one it would be the electronic format.  While I prefer to read print books, I would rather GM from a printed copy that I can write on, highlight, and pretty much tear apart.

After I read the first adventure in Weird Discoveries I had to give it a second read.  The new format, touted well ahead of the books' release, took a little getting used to.

The first two pages of each adventure give an outline of the entire quest, from start to finish.  There's a summary, some light detail, a suggested starting and end point, and a list of "Keys" - plot points or devices that carry the story forward.

The second two pages consist of a map and/or flow-chart of the adventure's structure.  Here's where I got a little hung up during my first read.  I noticed that the Keys could be found in multiple sections of the adventure.  Wait, what?  Let me read that again.

Actually it ended up making a lot of sense!  Each adventure is designed so that the plot keys can show up in several possible locations of the adventure.  So if you're trying to run a quick, two-hour demo, there's a reduced chance of missing something important.  Pretty sharp!

The last two pages of each adventure give the GM a lot more detail behind the adventure, and yet are totally unnecessary for the game to make sense.  Want to run a quick one-shot?  Just read the first four pages.  Want to stretch the adventure out for multiple sessions?  Pages five and six give you more detail, as well as ways to set the adventure into an ongoing campaign.

I've run Numenera for a lot of Numenewbies, and using the same pre-gen characters from Vortex can get a bit old.  Weird Discoveries is a package deal, however, and it comes with six ready-to-play characters for your table:

I really appreciate how each character has been created using the Numenera corebook, and don't include anything from the Character Options books.  While I have everything in the Numenera line, most new players start with just the corebook or the streamlined Numenera Player's Guide.  So a new GM can grab Weird Discoveries and have everything they need for folks playing one of these six characters.

Reason Four - Cyphers at the Ready

You can't play a Cypher System game without cyphers... that would be utter madness!  But it can be easy to forget about the little devices, especially if you're running a game for new players (or if you haven't run the game in four months.)  Rolling up cyphers mid-game tends to slow things down, which is why I usually select them ahead of time.  Weird Discoveries does this for you!

Pages ten and eleven of Weird Discoveries includes thirty-six pre-generated cyphers for you to use with your friends and players.  So when the adventure calls for handing one of these out, just pick one from the list.  The level and effects are already listed out.  If you have the adventure in PDF form, I recommend printing these two pages and then cutting each cypher out, maybe taping it to an index card for easy organization.

I love visual aids, especially when someone else does the drawing!  My maps tend to be a hot mess, and my drawings aren't much better than glorified stick figures and basic geometric shapes.  Weird Discoveries includes a whole section of "Show 'Ems" so that you can give your players a true taste of the weird.  I ran last night's adventure on Google Hangouts, so I had the PDF pulled up next to the hangout window.  When it came time to show a picture, I just screen-shared.  So simple!

So what did we end up playing last night?  I went with Please Help Us, an adventure that centers around a small group of explorers trapped within a tiny holding cell in the middle of a forest.  Minutes before starting the adventure, however, I learned that two of my players owned Weird Discoveries, and admitted to reading many of the adventures.

To change directions on my crew, I quickly reskinned the adventure, having it take place inside the mouth of a two-kilometer long, ancient, decaying humanoid resting by the Clock of Kala.  The humanoid looked a lot like Robocop.  All of the scenes of the adventure took place inside the giant humanoid's mouth, with the "Machine in the Wall" being more of a "Machine in the Tonsil."  I also turned all of the abhumans into walking, talking white blood cells that had gained intelligence and wore clothing.

We had a great cast of characters for this romp:

It had been four months since I had last GM's Numenera, although I did get a chance to be a player in +Troy Pichelman's game at Gen Con 2016.  As we moved through the adventure last night, all of the wonder and delightful weirdness came back to me.  My separation from the Cypher System had been too long, and my homesickness for the Ninth World ebbed.

I returned Weird Discoveries to my book shelf, well after midnight.

We did a quick and in no way awkward fist bump before I placed the book on the shelf.  I walked to the edge of the room and turned out the light.

"Iadace, Weird Discoveries," I called softly.  But there was no answer.  From the gentle snoring, and melodic flutter of its pages, I could tell that Weird Discoveries had already fallen asleep.