Fowl Deeds - A Gods of the Fall Thanksgaming Adventure 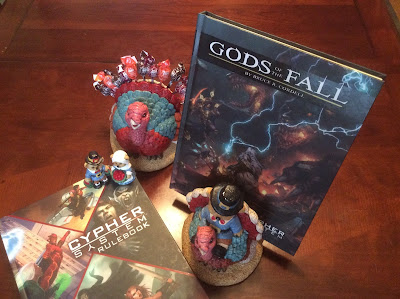 Thanksgaming is becoming a Walls family tradition in our house.  This tradition started two years ago, when I ran a turkey-themed game of The Strange for my family in Delaware.  The experience went so well that we went for repeat last year but with just the wife and kids.  Well now it's just expected that I am going to do a Thanksgiving themed game every year!

If you're interested in those escapades, here are the links:


This year, however, we're changing things up a bit.

First, I decided to change out The Strange for +Bruce R Cordell's dark fantasy Cypher System setting: Gods of the Fall.

Second, instead of giving you a big adventure recap, showcasing how much fun we had playing, I thought I'd just share the adventure with you, so that you can run it for your own gaming group!  We'll be running it for our family tonight, and I may even chat about the results later, but the main focus of this blog post is to give you something to try out.

One more thing... the map.  A lot of the inspiration for this map came from The Fallen Keep, a terrific piece by +Miska Fredman.  If you'd like a high-res version of this map, with multiple variations, you can download it now over at DrivethruRPG.  Alternatively, you can be supercool like me and just become one of Miska's patrons over on his Patreon page.  That's how I roll, and I suggest you roll with me!

With the quality of an afterlife in question, many in the city of Cryserech cheat death by undergoing a process known as the Necromigration.  This process involves the participant paying a healthy sum, getting ritually murdered, and then returning to life as a Reanimated corpse.

But what if there was another way to extend one's life?

Vincenzo Vincenzi, a native Cryseran, developed an alternative that would allow the participants to continue living in a flesh and blood form, albeit with a few added feathers.  A bit of a mad scientist and expert alchemist, Vincenzo had worked on a way to transfer the consciousness of an individual from one body to another.  But with a lack of willing human participants, Vincenzo turned to the one creature that he knew he could count on.  Trained War Turkeys.  While serving in the Cryseran military, Vincenzo trained war turkeys for combat.  With their reinforced beaks, and stealthy manner, War Turkeys were silent killers while War Hounds just tended to do a lot of barking.

Vincenzo's method was simple.  An alchemical formula was mixed and placed in a large jar. The patient looking to transfer their consciousness would have their brain liquified and then poured from the nose into the same jar.  The host's brain was then liquified and removed as well.  So long as Vincenzo performed the process within a few minutes, all he had to do was pour the patient's brains (mixed with the chemicals) into the host's nostril, and the organ would reform.

Although the initial process was just supposed to be tested on turkeys, eventually it could be used from human to human.  Perhaps an old human could have their brain poured into the skull of a criminal or slave.  The opportunities were endless!  But Vincenzo needed a plan, and he had some War Turkeys.  So he had his assistant Daphne attempt the process on him, using one of his War Turkeys as the host.  But Daphne made a mistake!  She didn't fully liquify the brain of the War Turkey.  So when Vincenzo's brain porridge was poured into the skull of the host, it fused with some of the remaining Turkey brain bits.

Vincenzo retained much of his own consciousness, but also many of the motives of a regular Trained War Turkey - destruction, gobbling, and a "turkey-kind first" attitude.  Vincenzo Vincenzi took on the moniker of the Foulest Fowl, and started up the Feathered Salvation, an organization that offered the citizens of Cryserech a true alternative to the Necromigration: the Fowl Soul Transplantation.

The player characters (PC's) have been approached by Ishver, the Necromigration Conductor of Cryserech.  Ishver has heard that a new and terrible alternative to the Necromigration has been researched by a mad alchemist who calls himself the Foulest Fowl.  The wicked scientist, and his Feathered Salvation, is attempting to lure Cryserans to the edge of the Dead Wood where they can attempt a process that will allow them to keep a flesh and blood form, and get a brand new body.  The Foulest Fowl even claims that his new process doesn't even require getting staked to a pole and left to die... it's supposed to be a lot less painful actually.

The Necromigration Conductor needs the Foulest Fowl dealt with.  Although the PC's aren't required to kill the mad alchemist, they need to shut down his operation as soon as possible.  If successful, the PC's will be given a great boon of some kind.  Most likely a sack of stars and all the turkey they can eat

Arriving at the Fallen Keep

When the PC's arrive at the edge of the Dead Wood, it does not take long to come across the Fallen Keep.  It is important to keep in mind the scene from the edge the forest.

The outer wall of the Fallen Keep is broken in several places but fairly easy to navigate.  Entering through the obvious entrance seems to make sense, but there's a gobbling risk.

The main portion of the keep is rather empty.  A single hallway circles the central chamber.  Of course, there is danger in this area as well.

The chambers on this level were built by Vincenzo's now dead servants to serve as living quarters for those looking to take on their new form.  Now they reek of dead flesh, and are home to the Ghoubblers: the failed experiments of Vincenzo.  While his own experiment worked, he is no longer able to do the procedure properly.

The heart of the operation, here's where Vincenzo is attempting to change the world... one turkey at a time.

With Vincenzo defeated or captured, the PC's can return to Cryserech and speak with Ishver.  They will certainly get a reward, and if they speak of the greater threat, Ishver may give the PC's a small force of soldiers to defeat the threat.  This could lead to a second turkey-themed Gods of the Fall adventure... of your own design!

I hope you enjoyed this third annual turkey-themed Cypher System escapade!  If you happen to run Fowl Deeds with your own group, please let me know how it goes.