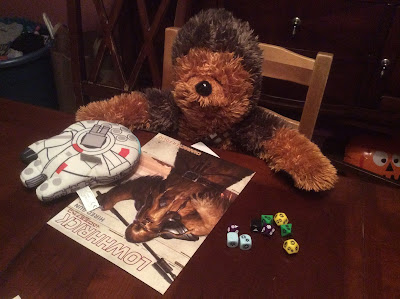 I think I'm getting the hang of this Star Wars - Edge of the Empire system, albeit at the detriment of my kids' bedtime.  If you haven't read Part One of our full Week of Star Wars Gaming, go back and give it a read.  Here's the continuation of this glorious, Force-filled week...

"41-VEX, I've got forty-one reasons for you to buy a dewback!" - Jumper Mappy, the Mos Shuuta Dewback Rancher trying to close a deal with the party's Droid Colonist. 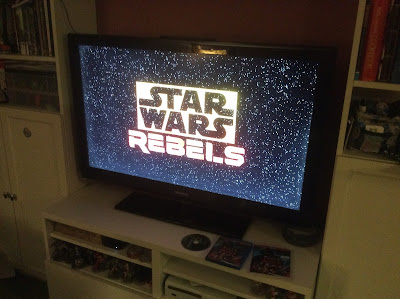 On Wednesday we debuted out brand new Star Wars Rebels, Season 2 collection.  Cooper and I watched two episodes while Evie did homework.  Carrie didn't get home from an event until later, so we had to wait until 9pm again to get back to our Edge of the Empire game. 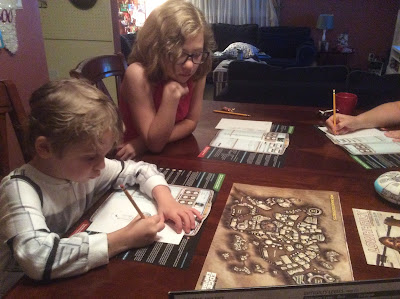 While Episode I of Escape from Mos Shuuta was fun, especially learning the new game mechanics, we had a much smoother and engaging night during Episode II.  Everyone started getting the hang of the rules system, which made gameplay a lot faster.  Also, the adventure came off the rails, and the party was able to explore the city of Mos Shuuta a little before continuing along the path.

Perhaps my favorite scenes all involved Cooper's Droid Colonist, 41-VEX, and the purchase of his new dewback named Mitchy.  Cooper insisted that he wanted to visit the dewback stables, and then had to have one of the lizards.  Once purchased (after some shrewd haggling), Mitchy became a full-fledged party member.

When the party faced off with some pesky stormtroopers, 41-VEX and his trusty steed charged into combat.  Cooper even used his dewback to talk his way past the droid guards out in front of the landing bay.  Cooper insisted that the droids should pet the dewback, and then had a tremendous Coerce roll.  So the entire team entered the facility while the guards were busy admiring Mitchy's silky scales.

Cooper wasn't the only one with crazy ideas.  In order to get into the landing bay with the Krayt Fang, Oskara (played by +Carina W.) claimed to be the new janitors for the landing bay.  The ruse worked, although I informed my daughter that her "Despair" die result meant that the landing bay staff wanted her to clean an incoming Imperial shuttle.  After some quick thinking the party slinked off in stealth-mode, quietly arriving just outside of the Krayt Fang. 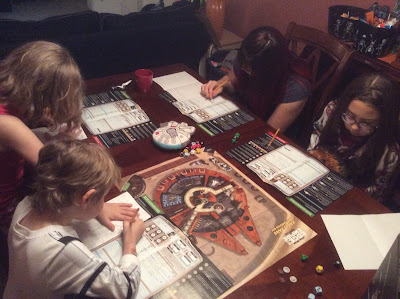 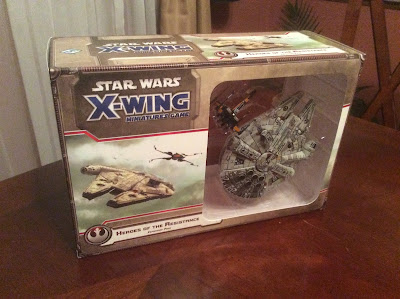 Technically we skipped the Star Wars "gaming" on Thursday and Friday, mostly because of work and then I had a DCCRPG game last night.  But I did get some great swag in the mail: Heroes of the Resistance!  Now I've got the updated Millennium Falcon from Star Wars: The Force Awakens, as well as Poe's T-70 X-Wing. 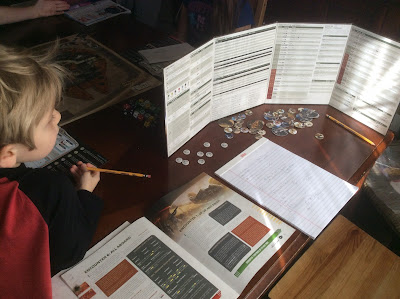 On Saturday morning we resurrected our old tradition of "Dunkin' & Dragons."  But instead of Dunkin' Donuts we went with Peace Love and Little Donuts, and instead of Dragons we went with Star Wars.  Yes, it was time to complete our run through Escape from Mos Shuuta.

On to Episode III... 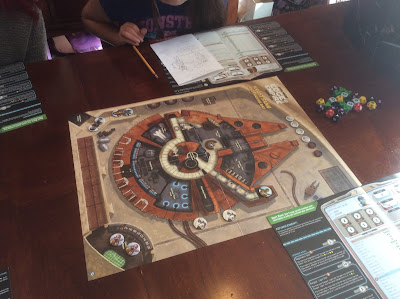 Finally the party reached the Krayt Fang, and we were about to take off into the Stars.  Continuing with their stealthy plan of disguising themselves as janitors, Oskara, Lowhrrick, 41-VEX, and Pash convinced the droids to let them on board the YT-1300 freighter for some light cleaning. 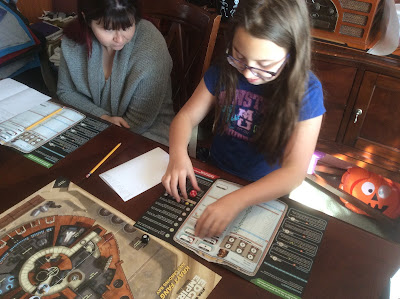 As soon as they were all on board, however, the team attempted to take out the security droids quietly, before Trex the Trandoshan could figure out what was going on. 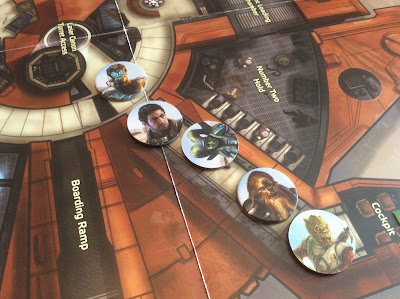 The plan didn't quite work out... as planned.  Oskara did a stealthy attack, as did Pash, but 41-VEX didn't get the memo.  The droid used a stun grenade, lobbing it down the corridor towards the cockpit, hitting the security droids, Trex, and even Oskara!  Cooper was amused. 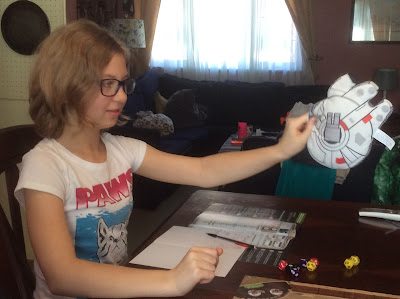 After slaying Trex, 41-VEX ran back to the engineering compartment and repaired the broken Hyperspace thingie.  The Krayt Fang roared into the skies above Mos Shuuta and into the black, never ending night of space.

The last part of the adventure was a short space battle between the party's YT-1300 freighter and a pair of TIE Fighters.  The action was quick and exciting, and since we only had four players, everyone had something fun to do.  I asked the group if they enjoyed the game, and everyone gave me a big grin. 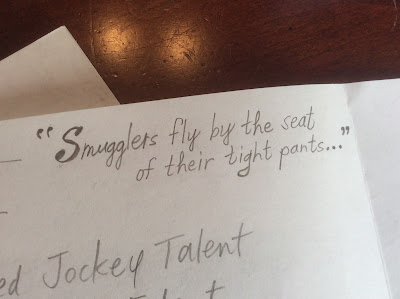 Jen wanted to make sure that I got a picture of her quote for Pash... 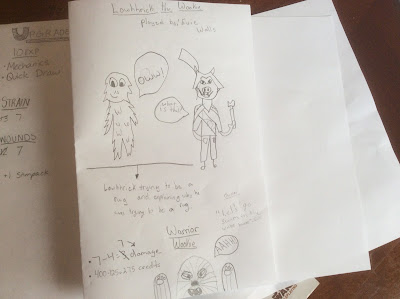 ... and Evie spent a lot of time working on her own character art. 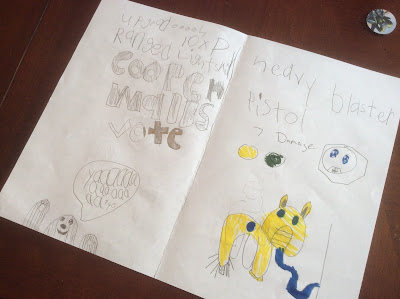 All in all, I think we had a fantastic time with Edge of the Empire.  I had my reservations with the dice mechanics again, especially with tallying them up.  I've had the chance to play in a few games of Age of Rebellion on Google+ and Roll 20, but we always use a dice-app to calculate the results.  But as we moved along in our live-table game, the dice calculating went faster and faster.  It really got easy when the symbols clicked with Carrie, and she was able to guide her brother... and mom... through the results.

I'm thinking about continuing the story of these four characters on Tuesday night, with the Long Arm of the Hutt. 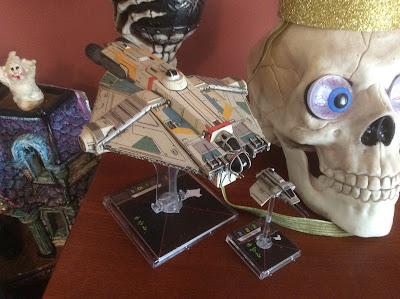 Cooper has sat in on a few games with me and his sister Evie, but has never had the opportunity to fly against someone in a solo match.  Well, today Cooper decided to take to the stars on his own!  Cracking open our Ghost and Phantom box, we toyed with the idea of Cooper flying the Ghost... but then again that's a tough ship for a first timer. 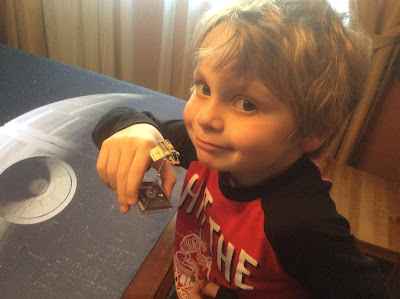 Since he really wanted to play as Hera Syndulla, the best pilot from Star Wars: Rebels, I set Cooper up with the Phantom. 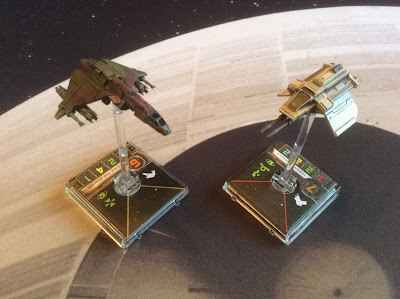 We each went with 25 points, and I picked a Scum and Villainy ship, the Kihraxz fighter.  I've only flown it once or twice before, and never with a one on one, but it seemed like a balanced battle. 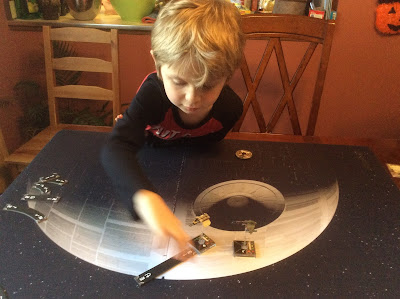 I think the kiddo needs a bit more time in cockpit!  He darted straight past my fighter, and then relied on a dorsal turret upgrade to pepper me from medium range.  Maybe another round or two would've helped him get a victory, but I got very lucky towards the end of the game. 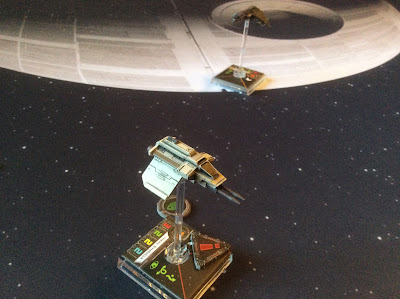 In the end, I was able to shoot down Cooper's Phantom, forcing the Lothal Rebels to perform a rescue mission and save their pilot.  At least Chopper was on board the shuttle to keep Hera company.