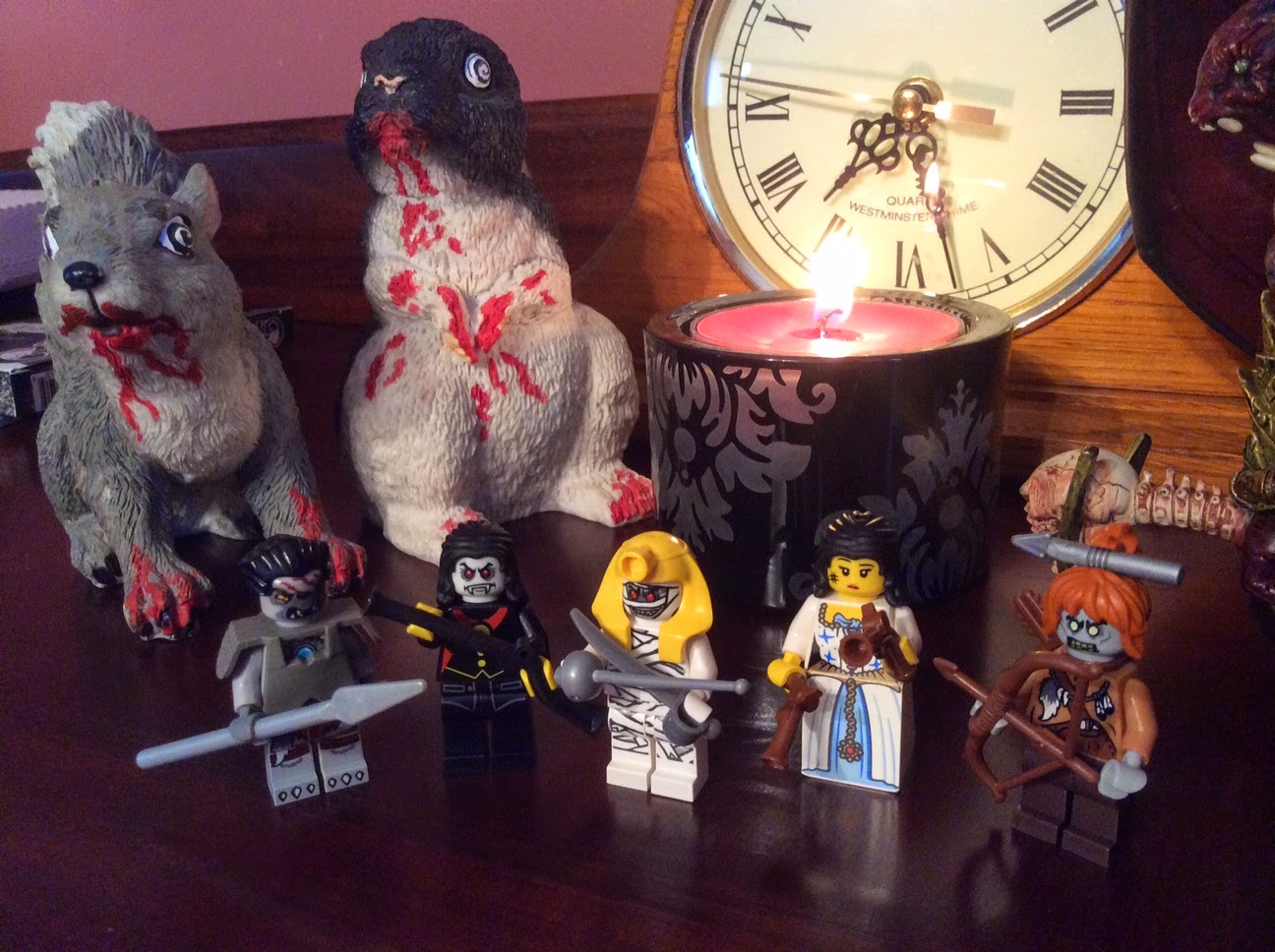 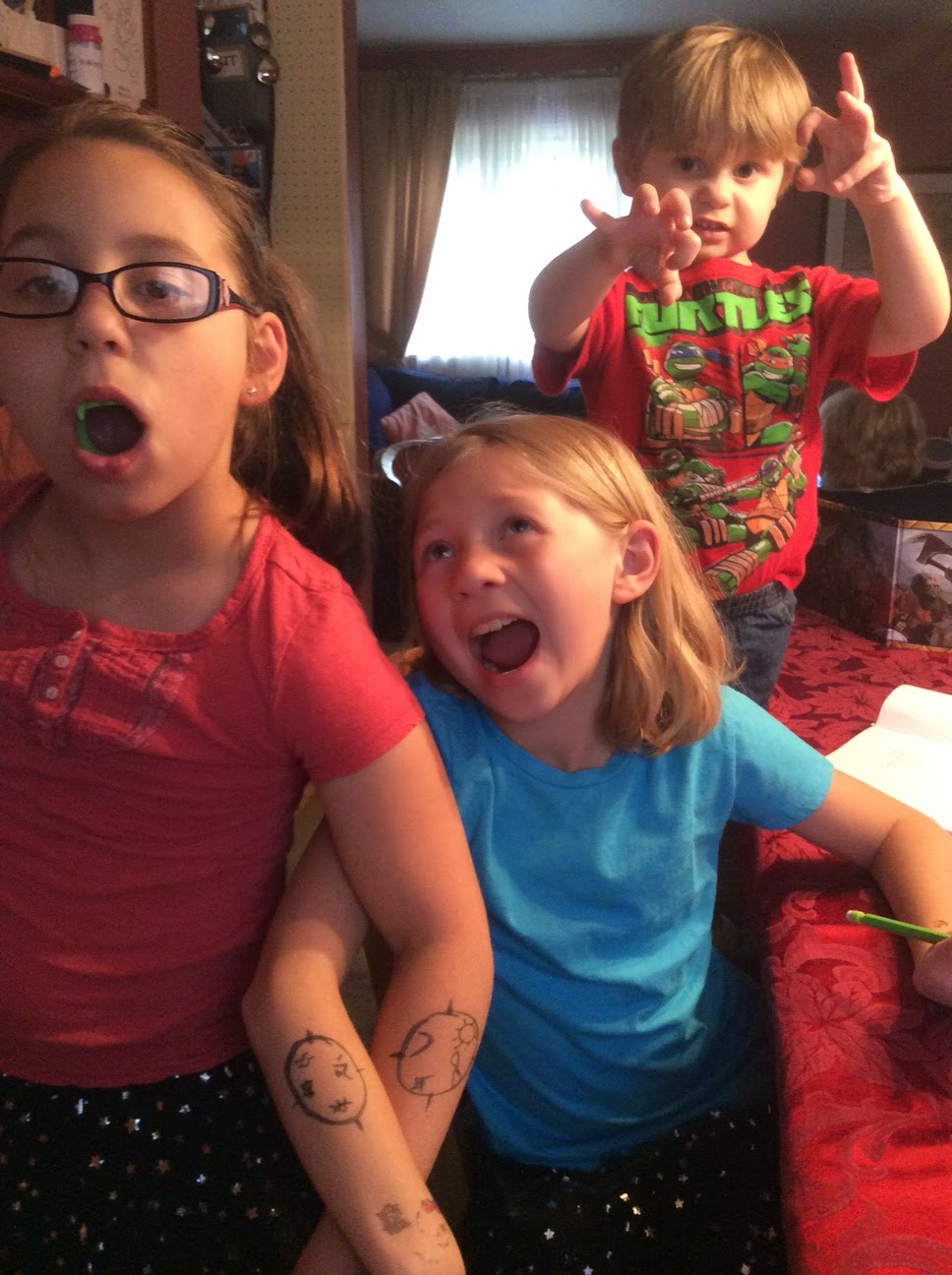 Since we had so much fun last week playing Accursed with the girls, my wife Jen and I decided that having a few "guest stars" over could make for an exciting evening!  So we contacted our friends Adam and Heather and set up a special night.  Adam hadn't played a table-top role-playing game since he was a kid, and despite being an avid console gamer, Heather had never rolled the polyhedrals before.  Realizing that this was going to be a special evening, the entire family pitched in to create "Halloween in July."  Candles were lit, the red tablecloth was brought out, and special decorations were placed all around the room.  The girls didn't get into full cosplay, but they did demand that I draw their Witchmarks on their arms. 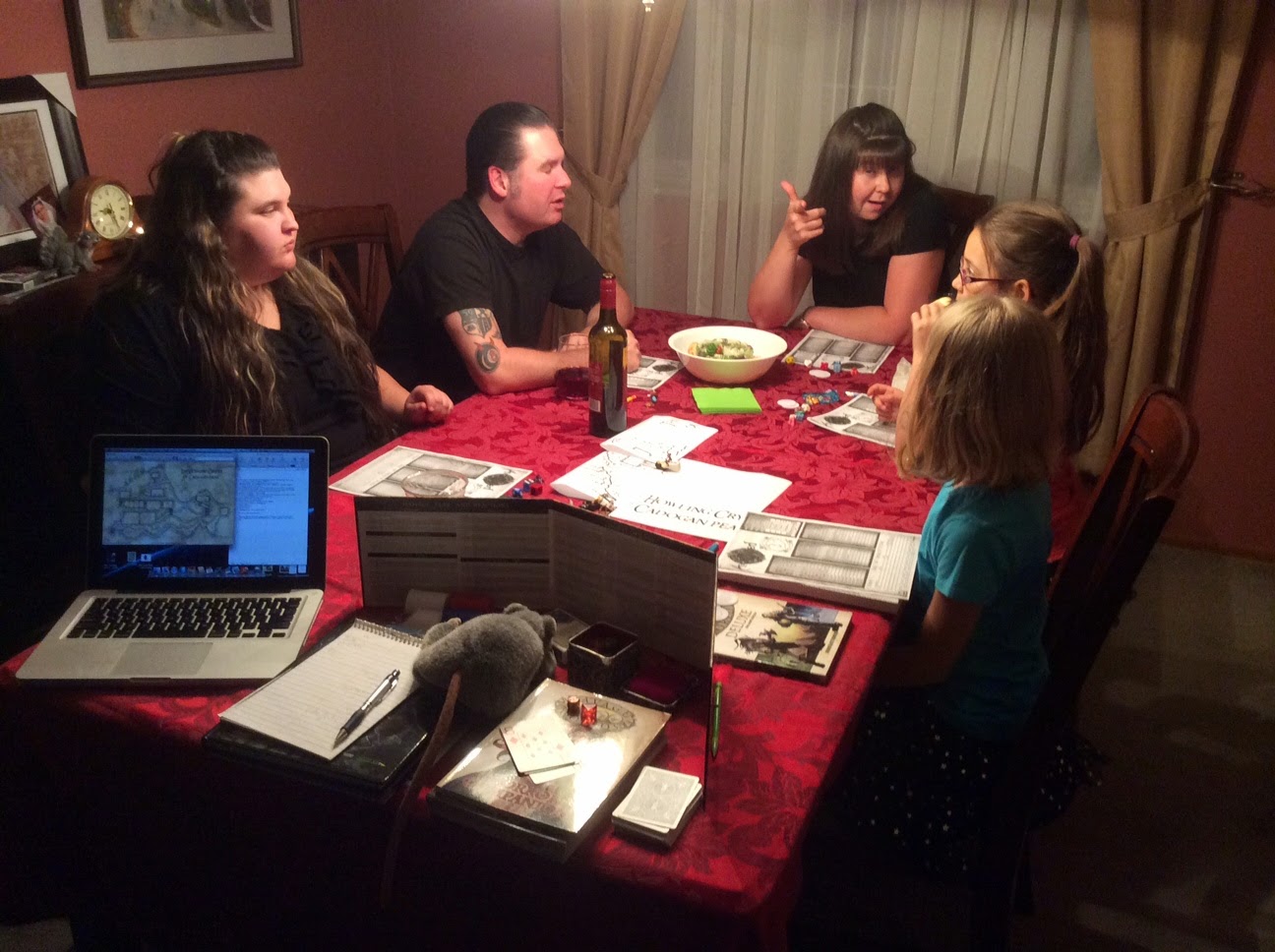 Expedition to Arachnis' Lair, Part One

Determined to get her enchanted engagement ring back from the horrific monstrosity known as Arachnis, Avarice Avernus led her two daughters, Annaria and Adelaide, to the dreaded Cadogan Peak.  This dreary hill-top was not far south of Augsing, giving Arachnis a clear view of the town in which she would occasionally draw sustenance in the form of townsfolk handed over by Mayor Goering.  As humans, the Avernus family would never have attempted this mission, but now that they were accursed, the three women believed their powers to be more than adequate to deal with the eight-legged threat.  If they were successful in regaining the engagement ring, that would be one lest artifact in the hands of the Banes.  To destroy Arachnis herself could endear the Avernus family to the city of Augsing.  There was a lot riding on this mission!

When they approached the peak they noticed that just before the entrance there were several cocoons lying about in a circle around a pool of stagnant water.  Most of the cocoons were popped open, with desiccated human limbs sticking out, but two were still moving, albeit slowly.  Avarice feared what could be inside the cocoons, so she lobbed a torch on the man sized, silk-covered container.  The cocoon began to move much more quickly at this point, rolling into the pool to quench the flames.  Surprisingly, from out of the pouch came a female revenant armed with a bow and a bandolier of alchemical tinctures.  The woman introduced herself as Badb, and along with Annaria's help, freed her associate Casey Ryback, a Vargr, from the other cocoon.  The two new accursed said that they too were in the hunt for Arachnis but believed themselves to be no match on their own for the dreaded beast.  Together with Badb's brother Beothach, they attempted to confront Arachnis in the evening, but were easily defeated by the monstrous spider-queen before they even entered the crypts.  Arachnis left Badb and Casey for dead outside, but dragged Beothach into the tunnels below.

Using her sarcophagus tools to help with the ascent, Avarice climbed the hilltop and took a look down the exposed tunnel.  Despite the spider-webs that filled the tunnels below, arachnophobia was not one of Adelaide's fears, so the white which climbed down the hole first.  She made it about halfway when tiny spiders began to pour onto her head from a chamber above!  Freaking out, Adelaide closed her mouth and covered her nose as the little minions tried to crawl into her noggin.  Casey Ryback knew exactly how to deal with spiders though.  Lighting a torch, the vargr ran forward and used the flames to burn the little creatures, while Annaria shook the rest off of her face.  Not wanting the spiders to have a chance at anyone else, Badb stepped forward and crushed the remaining bugs under her boot. 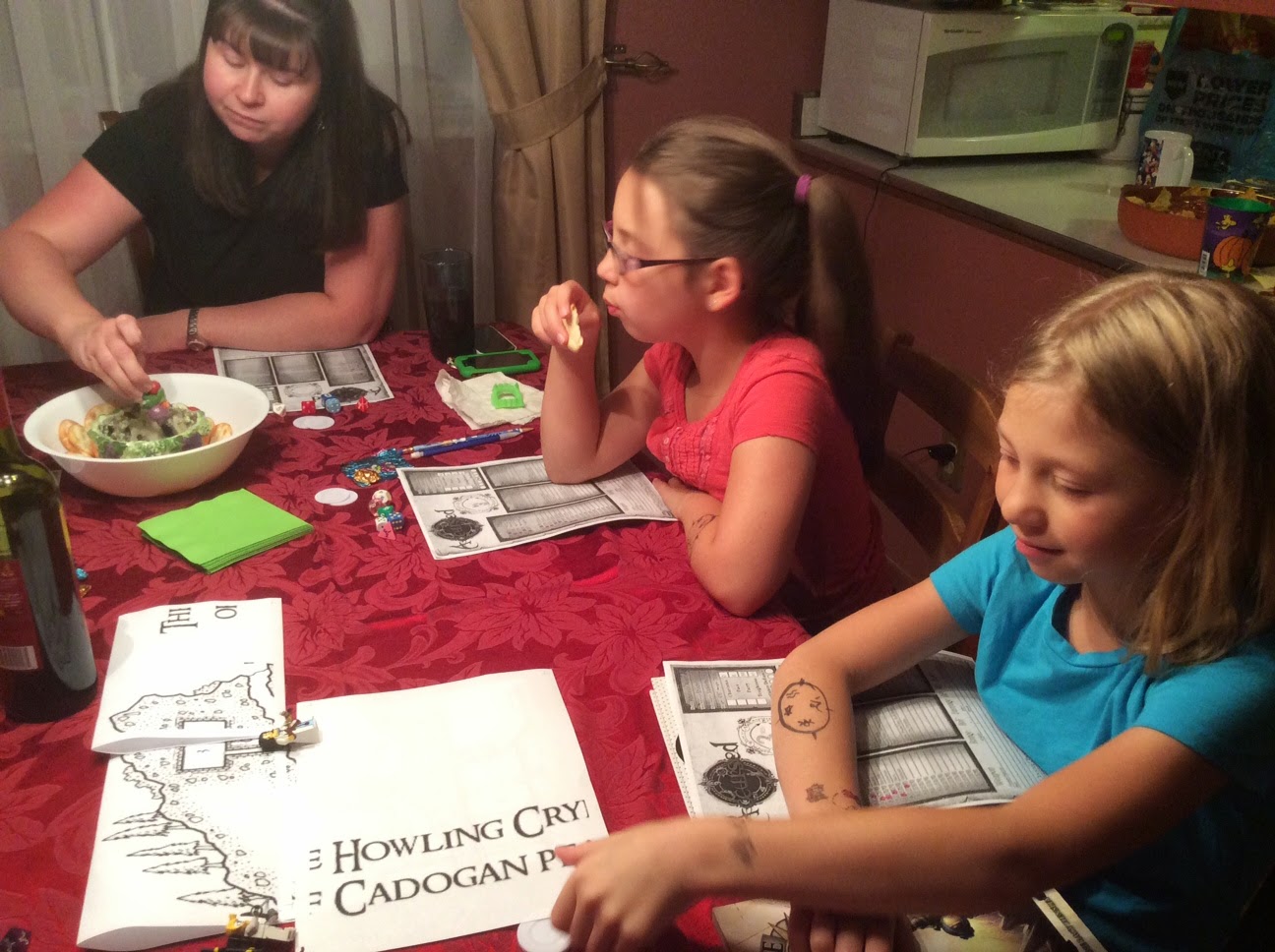 At the end of the tunnel was a stairwell leading down.  Figuring that the threats below could be considerably more dangerous, and at the request of the rest of the party, Casey transformed into his full lupine beast form.  Descending the stairs the party had a choice to make, left or right.  With his keen sense of smell, Casey determined that to the left was the smell of a stagnant and old human corpse, but to the right there were dead or dying goblins.  Choosing the left passage, the vargr led the team to a door which he used his paw to open. Inside there were several coffins on the ground as well as suits of armor and cloaks.  Wanting a suit of armor for herself, since she was flat broke and destitute, Badb went to remove one of the decorative plates.  As the revenant turned the armor over however, a giant spider the size of a dog tumbled out of the suit and onto the ground.  Five more large spiders appeared and the party was surrounded! 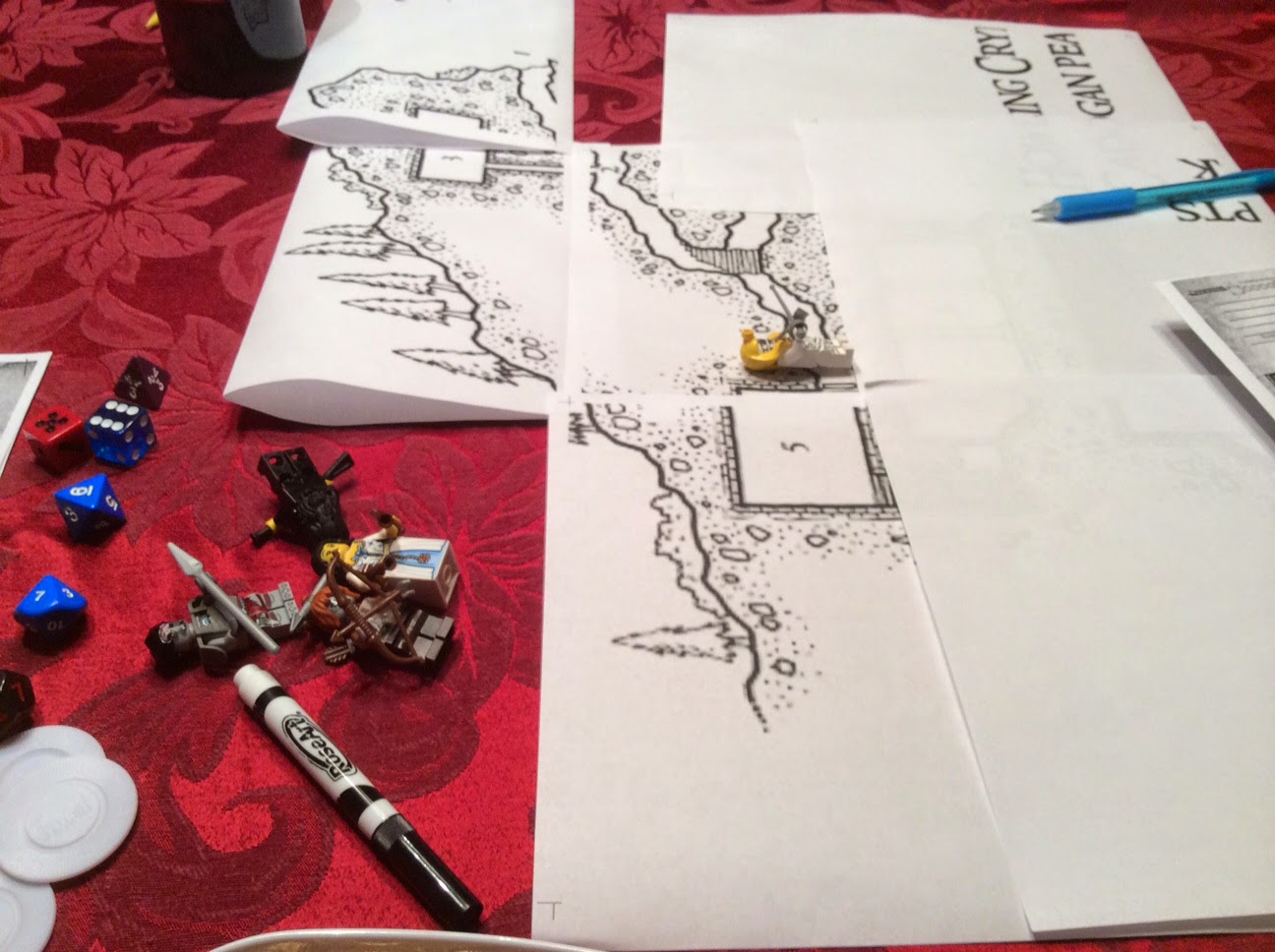 Casey Ryback was not a fan of spiders, and he took his anger out on the first, using his claws and bite to tear the arachnid limb from limb.  As the remaining spiders attacked, Badb, Casey, and Annaria were each bitten but managed to escape any effects from the venom, either due to their supreme constitution or undead status.  Lady Avarice's swords struck true on two of the spiders, and Annaria's hand axe was very useful in dispatching another.  While Casey was swallowing another spider whole, Badb used her entangle tonic to pin one of the beasts to the ground before slitting it wide open with her short sword.  The spiders had come from the coffins, but one remained closed.  Not wanting to leave any stone, or lid for that matter, unturned, Avarice opened the coffin to reveal another man-sized cocoon.  Slicing it open with her sword, Avarice found Beothatch, Badb's revenant brother, unharmed!

Avarice was glad to have reunited the siblings but with grim determination looked at her daughters.  There was still a lot of dungeon to explore…

"In the 'meanwhile,' you slice him in half!" - Carrie was really hoping that Evie would cut Adam's character while freeing him from the cocoon.

"Despite the fact that you can manipulate yourself like a 'Transformer' you can't turn into a funicular." - The game master tells Jen that Avarice can't ease the party's ascent up Cadogan Peak.

"Am I allowed to speak in a whisper?" - Adam whispers, hoping to get into his character, Casey Ryback. 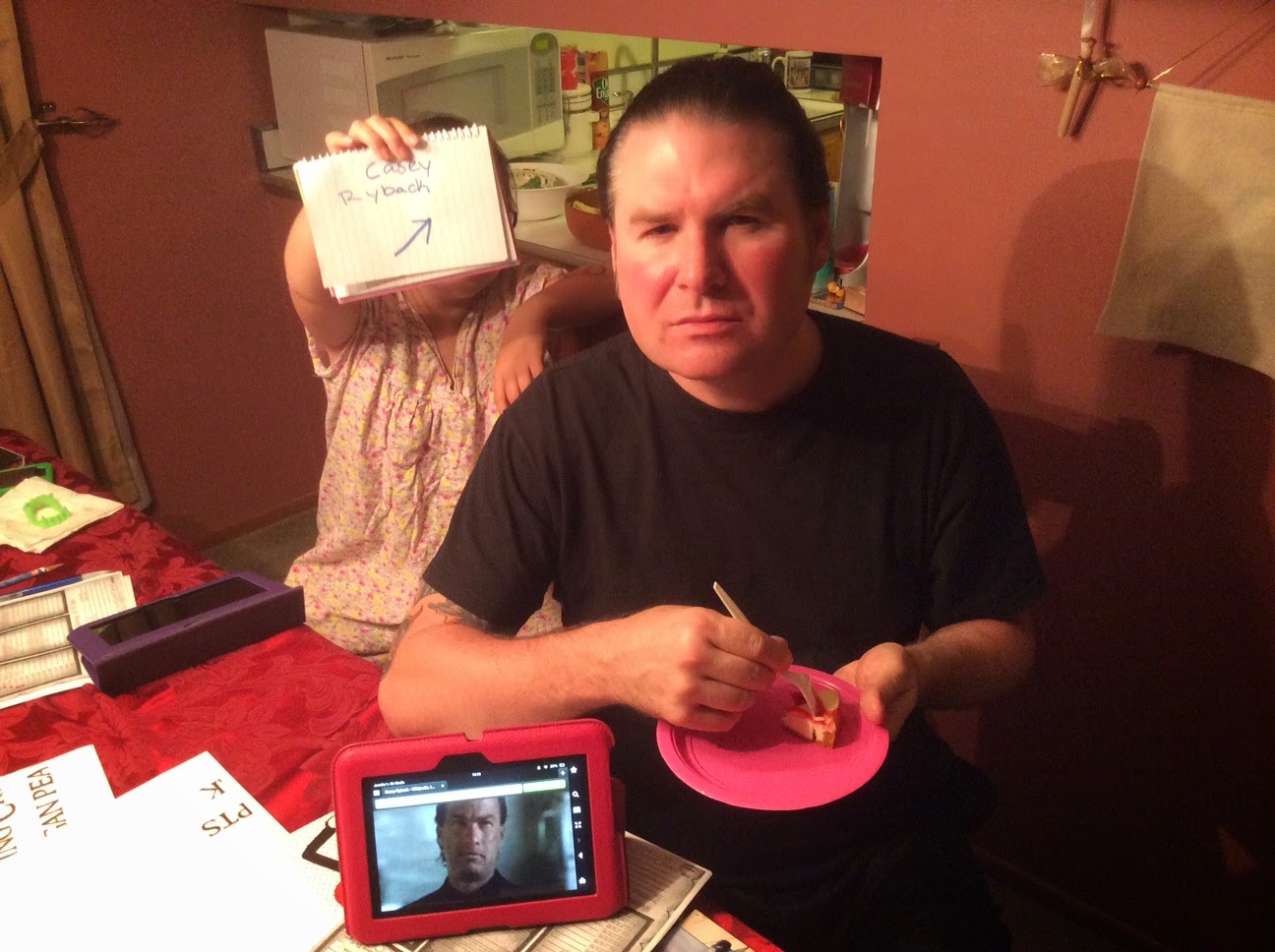 Adam gets into character

The inspiration to write this adventure came through following Glynn Seal's work at MonkeyBlood Design.  Accursed really does feel somewhat like playing an RPG version of Castlevania, and what better way to map out your adventure than as a side-scroller!  Well a few weeks ago I was watching Glynn's progress on Google+ as he developed this phenomenal map and I realized that it would be absolutely PERFECT for our table.  Although neither of my girls are any good at Castlevania (they both say the original game is impossible, which is just about true), they are both familiar with side-scrollers, and Carrie is an avid Terraria fan. Although we did not get very far in the Howling Crypts yet (Glynn chose Bryan Steward's suggested title for the map, and I went with it), over the next few weeks the girls and their mom will be moving further through the abandoned temple, hoping to uncover the lair of Arachnis!

To check out more of Glynn Seal's work make sure to check out his website!

Finally, if you haven't had a chance to check out Accursed yet, please make sure to give the game a look at www.accursedrpg.com!  You'll be glad you did!


Additional Images from the Evening