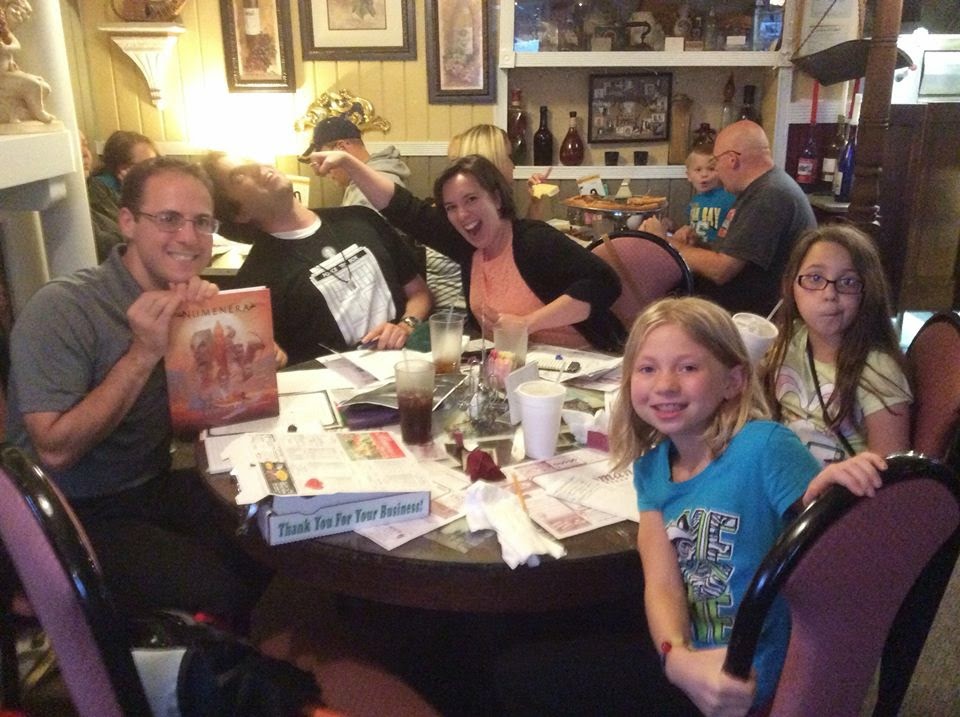 We are a Hungry Group that Demands Pizza!

About a week ago I put up a post on our local area Facebook group, All About the Norwin Area, looking for places to play in public.  So far we've had a game at Five Guys Burgers and Fries and another at Panera, but when Sharon from Romano's Pizza and Cafe offered to let our little troupe of gamers run a session of Numenera at her restaurant, it was clear that Italian was on the menu!  We strolled into the restaurant on an evening when we were told it wouldn't be too crowded, and found that there was a table reserved for our group… but also that the restaurant was PACKED!  By far it was the most crowded public location that I've ever played at, which was awesome to experience but also quite nerve-wracking for me!   I've become accustomed to playing in public, but usually in a space where no non-gamers can here me nerding out as a game-master.  But tonight I'd be on display for everyone sitting around us.

We had a blast!  The food was fantastic, as was the service.  Sharon and the rest of the staff made sure we were comfortable and that we had everything we needed.  We ordered an extra-large cheese pizza with and some fried mac-n-cheese bites, which fed all five of us with pizza to spare. 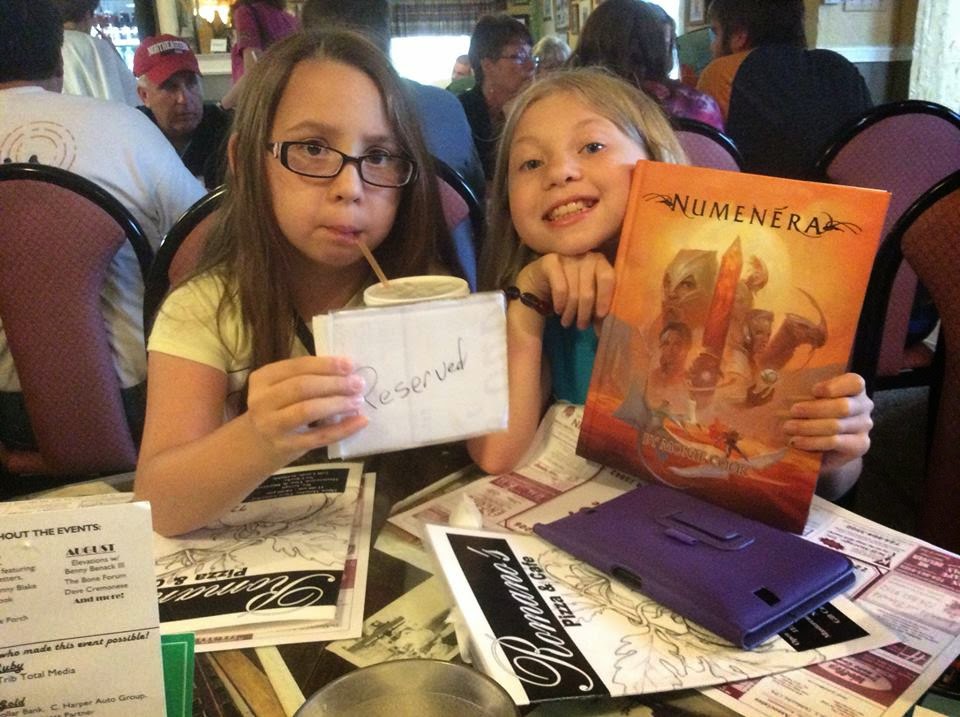 Our table was "Reserved" for awesomeness!

What made this night even more special was that we were playtesting +Andreas Walters's Non-Player Cards, a system neutral RPG accessory that, as of this post, is nearing the end of it's Kickstarter funding project!  Andreas was kind enough to give us some sample cards to try, and the adventure I was running needed a couple of NPC hooks, so it was a perfect fit.  This was a lot of fun!  As the party met the NPC's I picked three cards for each of the strangers at random and used a chart to roll up names. 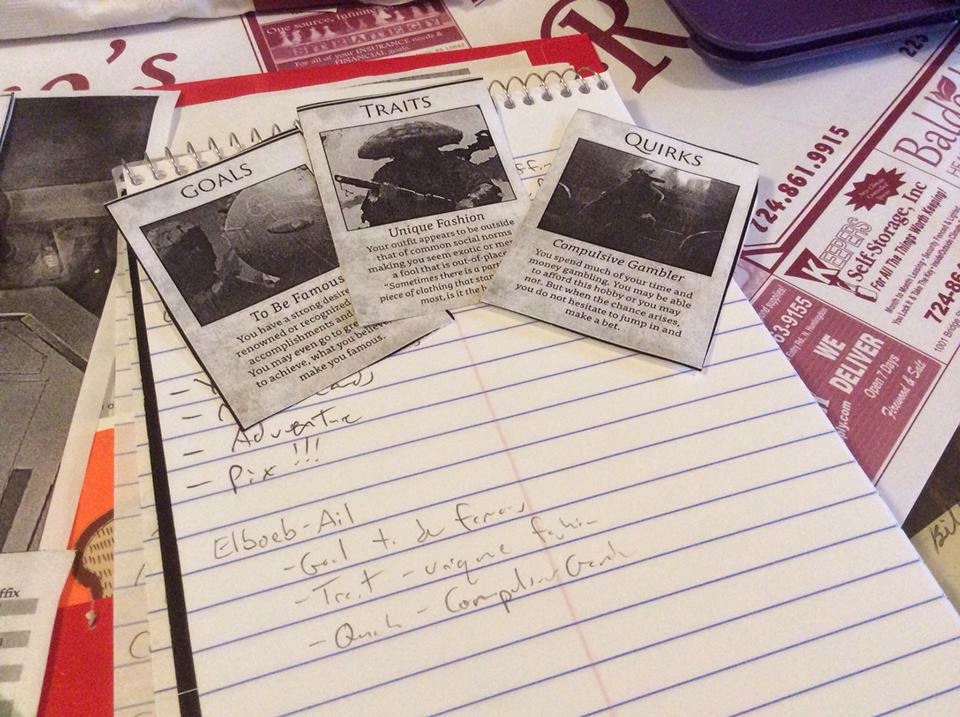 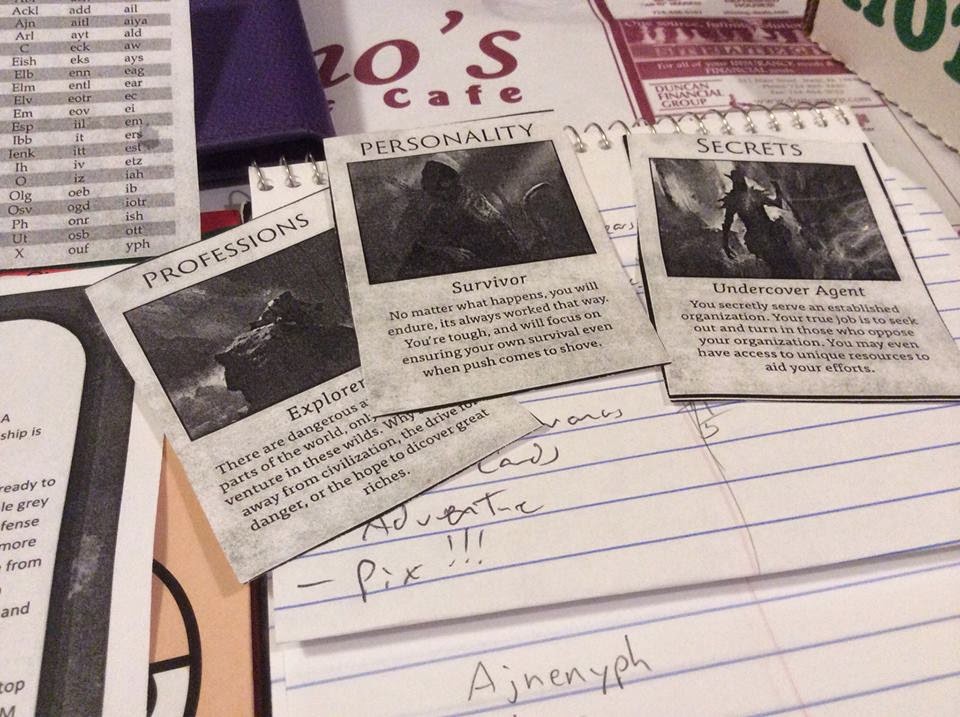 I'm proud to be a backer on this Kickstarter project, and suggest you do the same.  The cards could be useful for all sorts of games, but for my "game-on-a-fly"/sandbox style of game-mastering they are truly empowering.  I'll be honest, when I first heard of the cards I thought "well I can already design NPC's pretty easily, do I really need these?"  But in play the cards didn't detract at all from my own creativity, in fact (as you will see) they gave us more depth in role-playing the scenes with the NPC's.  I can't beg you enough to get behind this phenomenal project!

For our adventure we also featured a product from a terrific third-party publisher, +Ryan Chaddock, as Sleeping Giants is a short adventure featured in Echoes of the Prior Worlds, a collection of very rich and innovative scenarios that showcase Numenera's emphasis on exploration and discovery.  I ran Cryo Jack's Lair earlier this year at a Norwin Game Knights event and +andrew lyon ran Anamorphosis at another, but Sleeping Giants may end up being my favorite from the book. 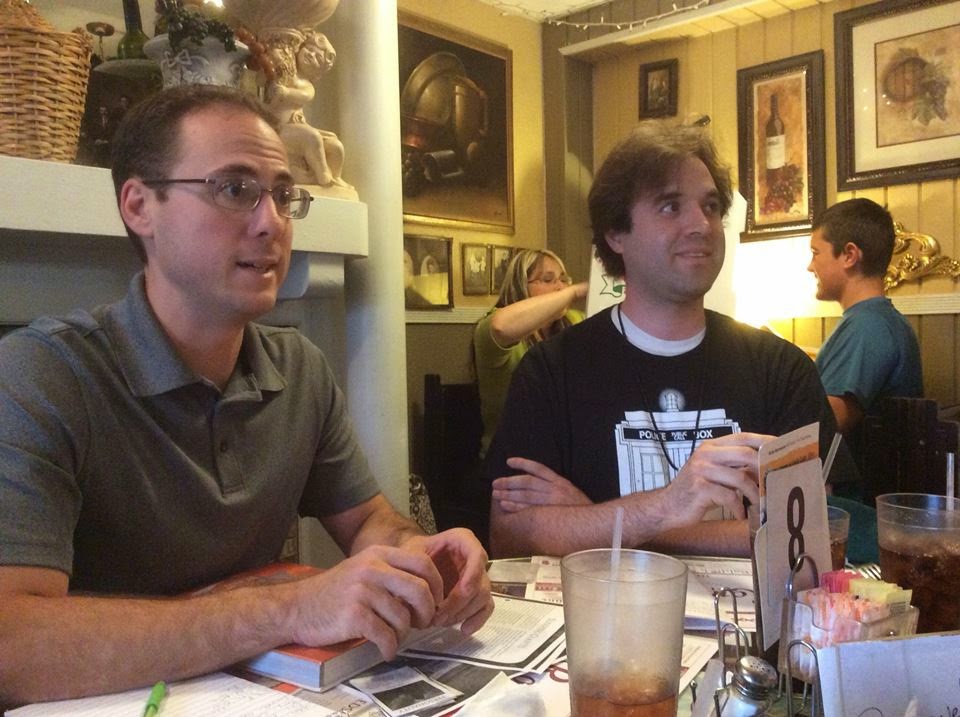 Me and Jeremy admire the crowded nature of Romano's

Upon freeing Boregal from the wicked contraption that contained his preserved brain, our intrepid band of inquisitive Numenera Hunters took the disembodied organ back to Remy and Ezmerelda's hometown of Cylion Basin.  Rygax still wanted to take his team west across the Black Riage to Qi in order to research the visitants who may have left behind the Druissi vessel, but didn't have the funds to continue their quest.  Knowing that his new party needed shins, Remy started to set up some games of chance in the less reputable parts of town.  During one of the games, Remy won quite a bit of money from Elboeb-Ail, a rather compulsive gambler who was hoping to one day become famous with his winnings [generated with Non-Player Cards].

But when Elboeb-Ail couldn't pay up, Remy had Vectoria intimidate the poor sod into promising something bigger… much bigger.  So Elboeb-Ail coughed up a story about a nearby glowing hole in the foothills of the Black Riage where unimaginable treasures await the brave and daring.  Legend told of a giant, mile-high guardian automaton that protected the area surrounding the blue light millennia ago, but that it had not been seen in recorded time.  Remy took the information as payment, but also wanted Elboeb-Ail's fine hat, an oddity in that it could be stowed in an extra dimensional space when not worn.  One look from Vectoria and the hat was hastily handed over to the party.  Elboeb-Ail was a truly a broken and defeated man. 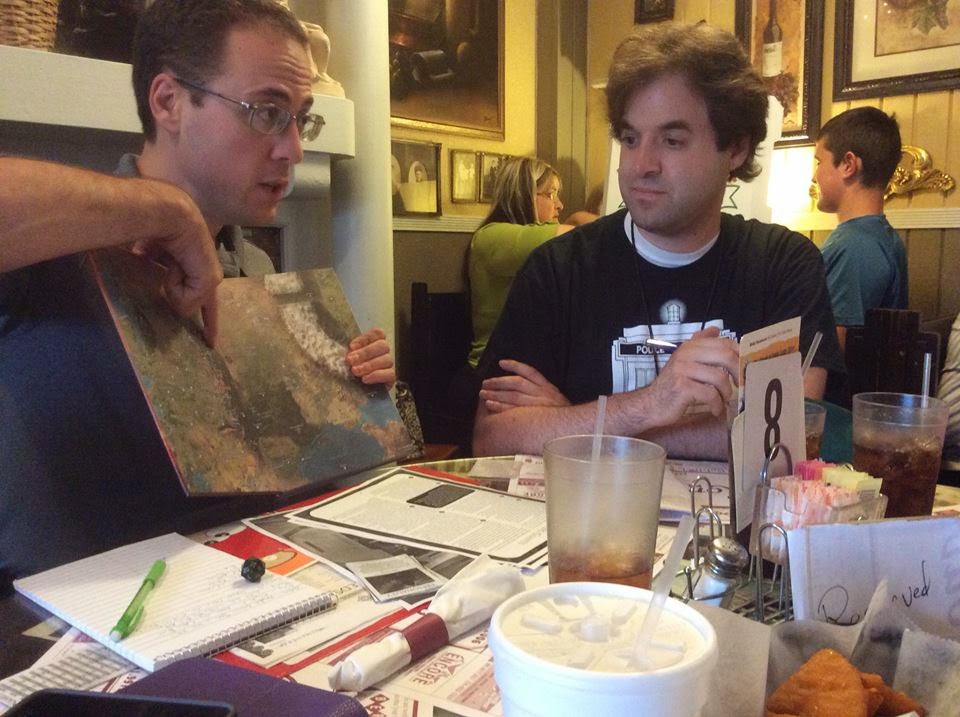 I show the party where they are on the map


The path to the glowing blue light was fairly straightforward, just a dozen miles to the west and the four Numenera Hunters found the site of the buried treasure.  The party scaled a loosely packed hill of gravel and dirt until they came upon the hole in the ground, out of which glowed a faint blue light.  Vectoria thought she could see a passage beneath the hole, but passing through the forcefield that created the glow wasn't something that she wanted to do without a bit more information.  Ezmerelda used her sharp nano-trained eyes to scan the forcefield and figured that the polarity was as such that the characters could pass through the shielding but could not exit unless it was manipulated in some way.  This was of no concern to Remy, as he had a cypher that could allow the entire team to pass through a surface as though it wasn't there.  The swift jack also had some rope, so that the party could lower themselves down into the chambers below.

Vectoria was the first to drop down the hole, using the rope to slow her descent.  Once she was at the bottom of the vertical passage the vengeful glaive found herself in a large, sterile corridor full of metal and synth.  There was a faint glow all around her, but she had little time to get her bearings before a pair of floating spheres attacked her.  Struck once by a sphere but managing to dodge the other, Vectoria called for the rest of her party.  Remy dropped down next, followed by Elmy and then Ezmerelda.  Remy's arrow damaged one of the devices, but it seemed to have a nasty ability to sling projectiles back at the shooter.  Elmy's ability to siphon power sapped the energy from one of the spheres, while Vectoria slashed at another with her sword-staff.  Ultimately Ezmerelda's gravity-onslaughts would crush the two floating orbs before they could cause the party serious injury.

While they dusted themselves off, the party began to hear a soft voice calling from further down the corridor.  While Remy didn't seem too interested in investigating, Vectoria darted ahead to see who else could be in the structure.  The party found Ajnenyph [generated with Non-Player Cards] an explorer who was lucky to have survived an encounter with at the same floating, spike wielding spheres that attacked the party.  Vectoria recognized Ajnenyph from town, and the man admitted that he had spent significant time in Cylion Basin before hearing the tall tale of a mile-high walking automaton and the treasure it was guarding.  He admitted that he was secretly an Aeon Priest on a mission to discover the truth behind the glowing blue light but should not have come alone.  Ajnenyph was severely wounded (with a really bad hernia apparently), so Remy gloved up and with his first aid kit performed the proper procedure to get the man mobile. 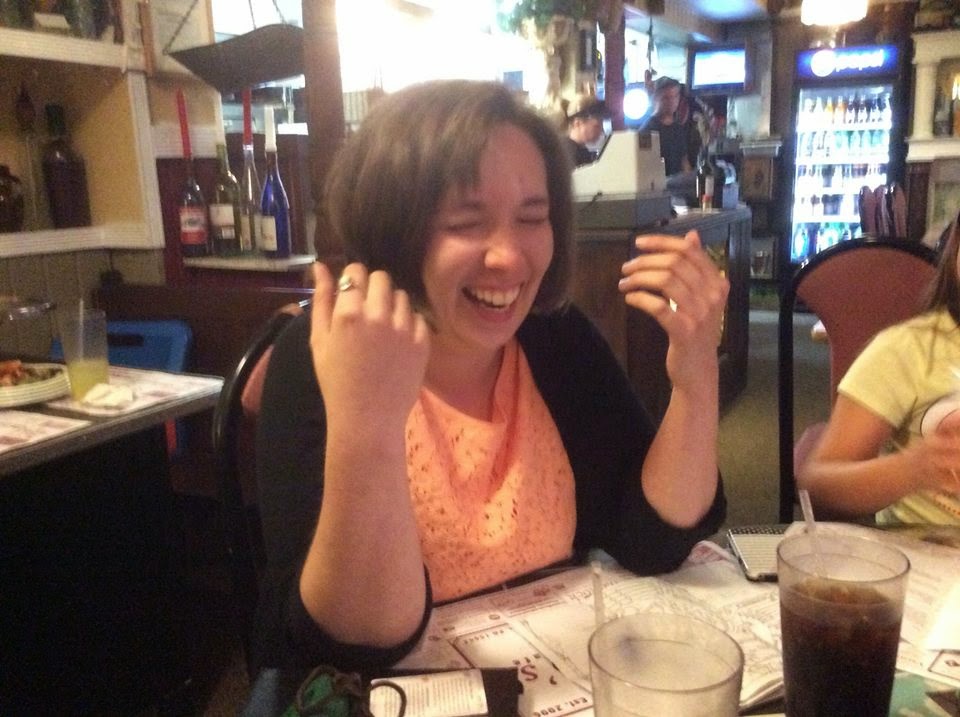 Emily lost it at the description of Remy's healing roll

The party continued down the unnatural corridor until they came to a section that Elmy swore was some kind of control room for a vehicle of the ancients.  There was one chair, the mystical nano noticed, that seemed to psychically call out to her, and she felt compelled to sit down.  But once this happened the room started to move!  Quickly the rest of the party braced themselves so as not to fall down the long corridor that was now below their feet.  Each Numenera Hunter was then almost magnetically sucked into an individual seat as a massive view-screen appeared before them all.  They were not in a structure guarded by a giant automaton.  Rather, they were in the giant automaton itself: a four-hundred foot tall glowing female form that was giving off a golden light.  Elmy's mind was hacked by the machine's own intelligence, which commanded the nano to pilot the monstrous creation towards it's target: Cylion Basin, where it would rain fire and destruction upon a long dead entity, which was most likely no longer there. 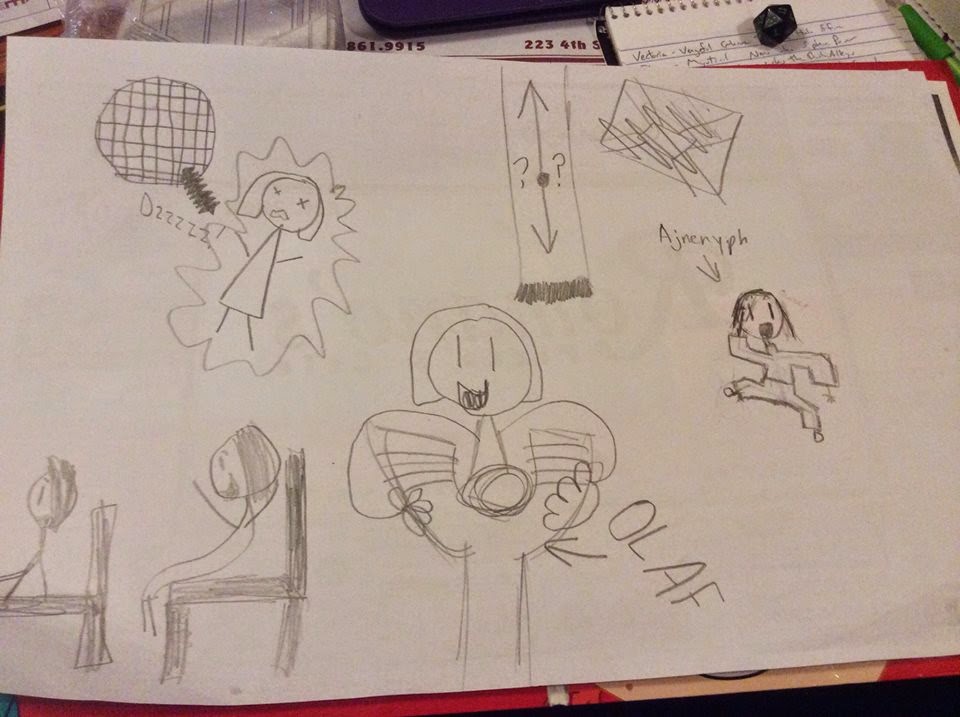 Carrie's illustrations of the adventure

"I was cheating." - Jeremy's explanation as to how his character was such an excellent card player.

"We want to text Rygax!" - Emily felt that the party should be able to "phone-a-friend" Andy's character, since he couldn't play that night. 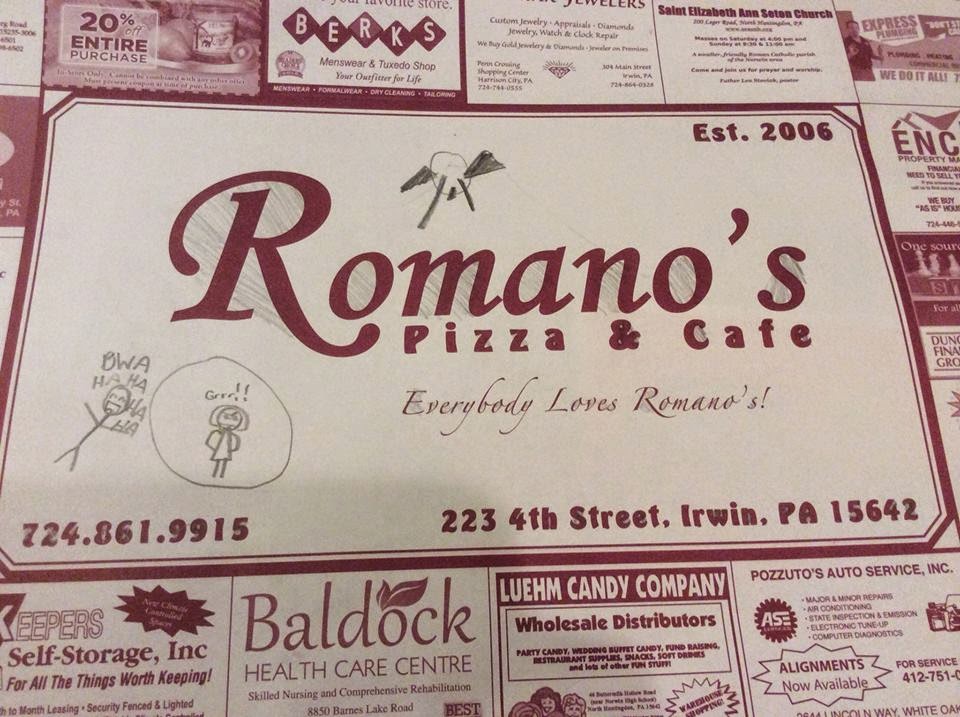 Make sure you place your order ASAP!!!