OD&D Dragonlance: My Son and Dad Role-Play for the First Time 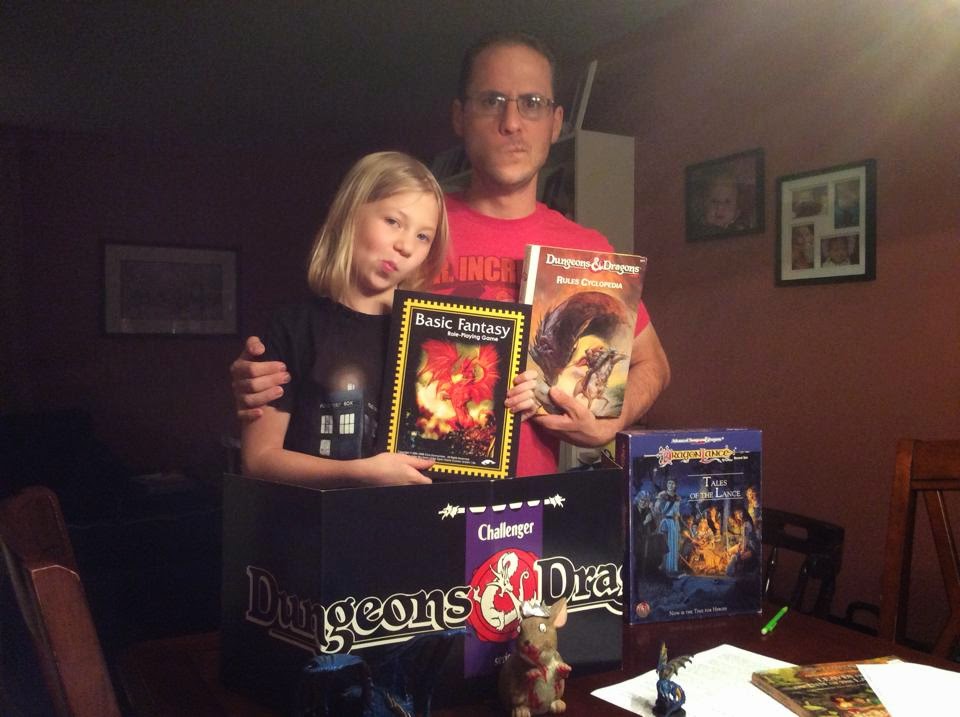 OSR stands for Family Values in our house


I've had a lot of gaming sessions in my life, far too many to count.  Like most of you, while many are enjoyable and very memorable, those games that are truly legendary are few and far between.  I'll always remember the 48 hour one-on-one gaming marathon at my friend Andy's house.  The Ravenloft game where we broke out the incense, candles, and red silk scarfs for the first time... just amazing.  Most recently the Numenera game held in a local park!

But all of these gaming sessions may pale in comparison to the epic evening where my daughter Carrie and I ran an OD&D/Basic Fantasy RPG session of Dragonlance for three generations of the Walls Family!  This event was especially special for three incredible reasons:  it was Carrie's first time GMing, and the first game for both my son and my dad. 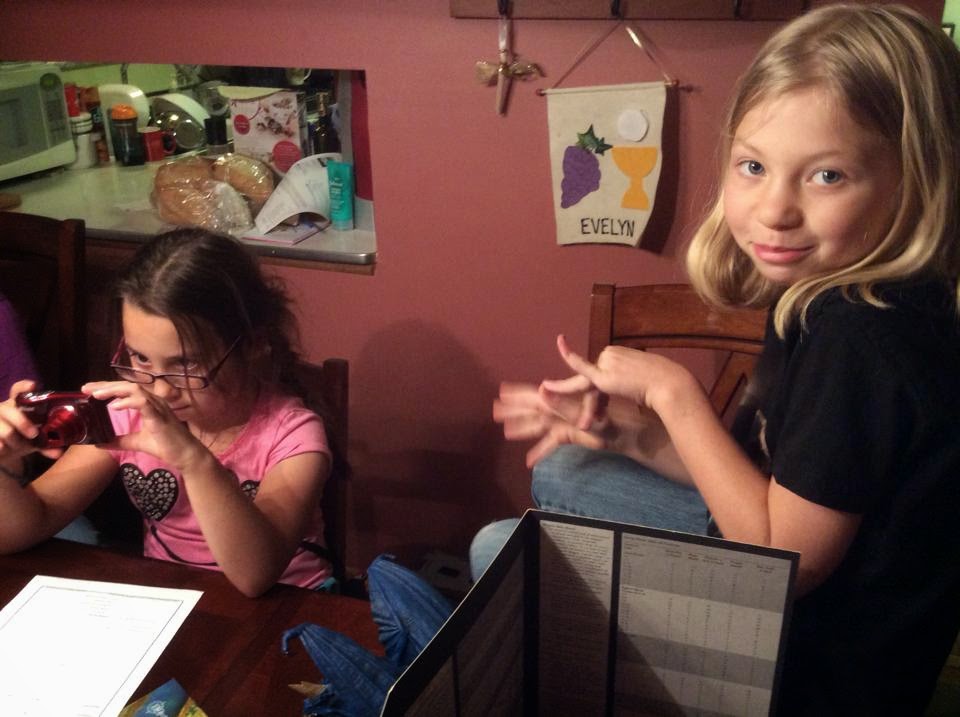 Carrie's had a copy of the Basic Fantasy RPG rules for about a year now, and while she can make characters on her own, all of her time spent has been on the other side of the GM's Screen.  Recently, however, Carrie asked if I would help her gamemaster a session of BFRPG, so I started showing her the parts of the book where she needed to focus.  Encounter rules, creature descriptions, a published adventure, Carrie poured through these materials and seemed ready for the serious responsibility of running a gaming session.  To help her develop her skills, we came up with the plan to split responsibilities.  I would tell the backstory and help guide the characters through the session while Carrie would deploy the monsters and run the encounters on her own.  Much to my surprise and delight, my daughter had no problem taking command of most of the adventure, coming up with NPC names, detailing areas on the map, and describing scenes to the players. 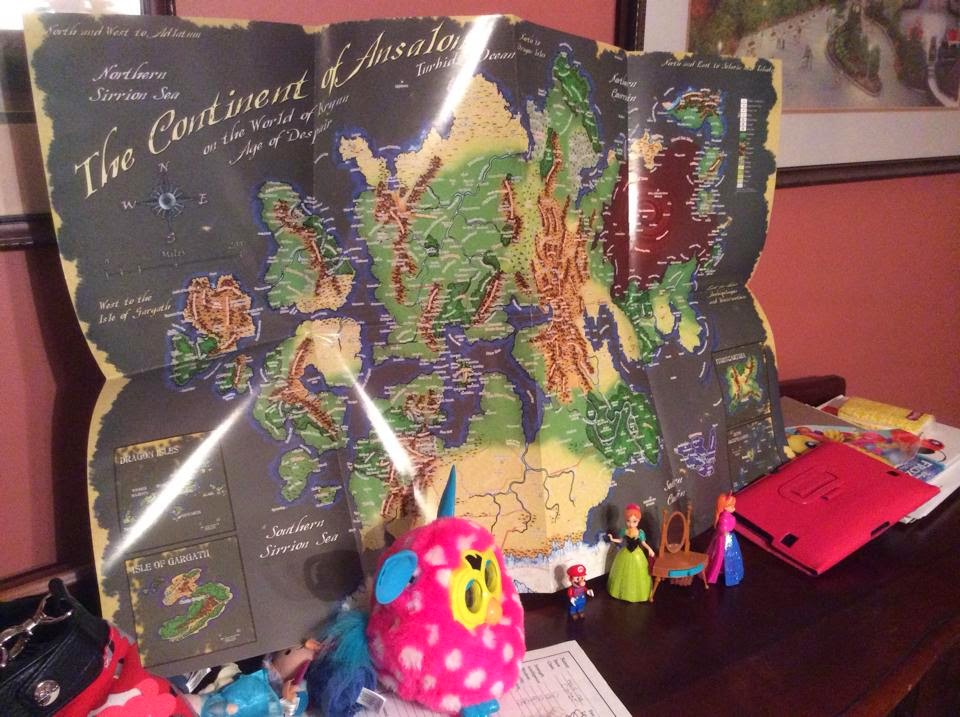 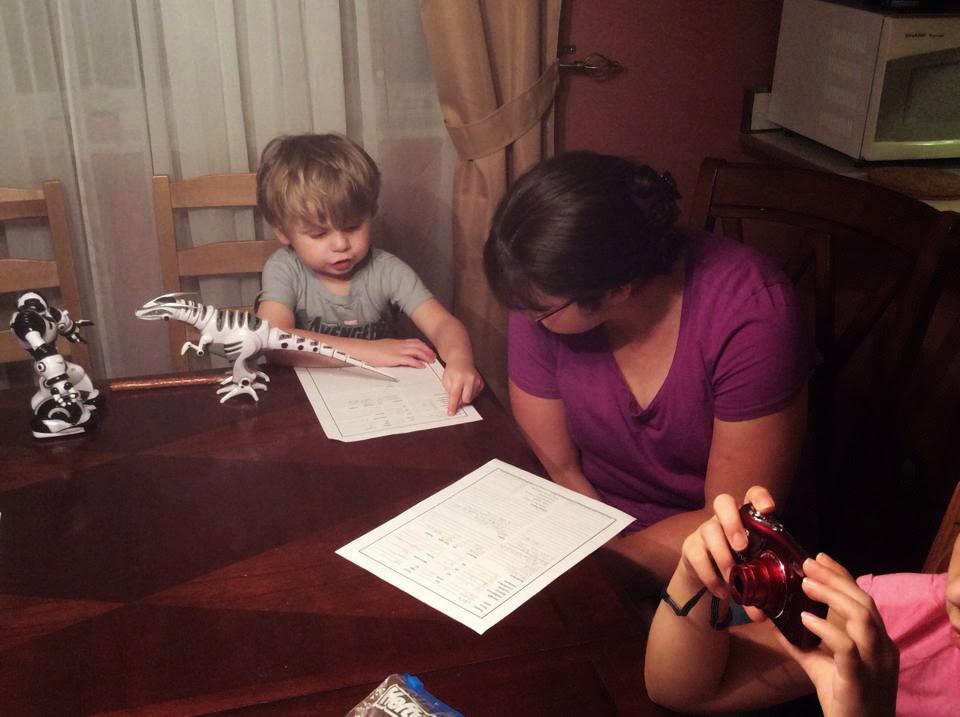 My two daughters, Carrie and Evie, have been role-playing for quite some time.  Typically I start my kids at RPG's by age 5 for limited sessions, but since my wife and mom were playing (both having played an RPG before), Cooper would've been alone in the living room while the rest of us had fun at the table.  Unacceptable!  Little Cooper will be four-years-old in just a week, so why not give him a chance to explore Krynn.  We asked him what he wanted to be, giving him a choice of an amazing warrior or a powerful wizard.  We even asked him if he wanted to be a "really silly dwarf."

He pointed at the D&D Rules Cyclopedia, said that there were dragons in the game and boldly declared that he was going be a dragon. A dragon named "The Killer".  So I dug through my stash, whipped out my copy of Council of Wyrms, and built Cooper's Brass Dragon hatchling. 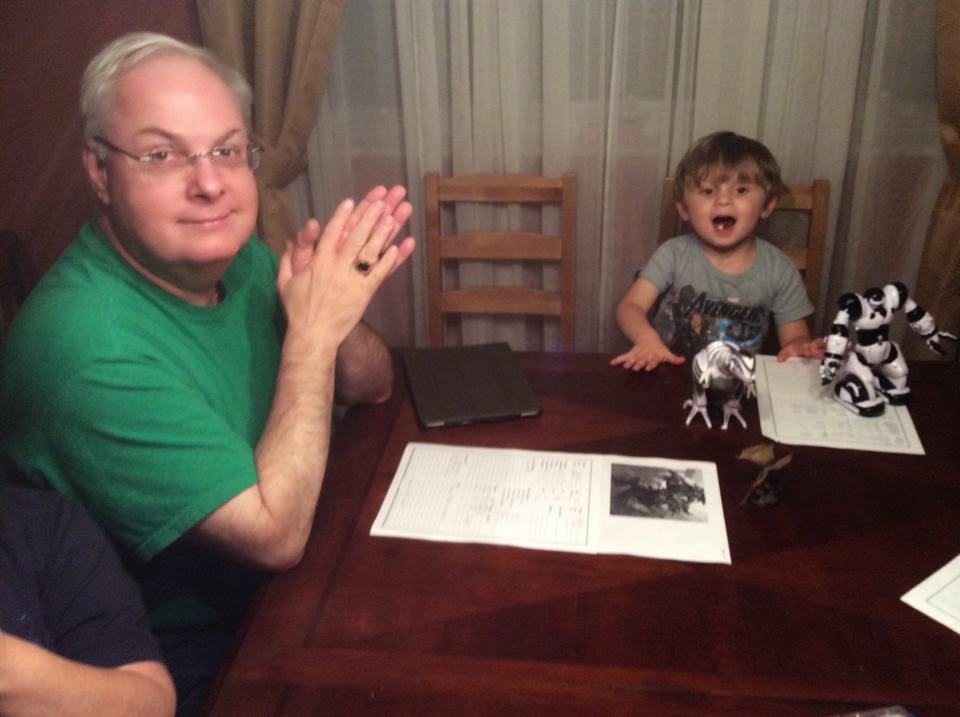 Now it was destiny that Cooper would play in one of my role-playing game sessions… when you are born into a family of geeks and nerds your future is pretty much predetermined.  But there is one other person in my family who had never played D&D (or any other RPG for that matter).  My dad, aka Pop Pop!  Whether he knows it or not, this has always been a dream of mine, to get my dad to play a role-playing game with me.  He's done Zombie Dice with us, and other typical board games, but the closest he's ever come to playing an RPG was when he took part in a How to Host a Murder in 1990.

But to make up a character like Fred the Minotaur Fighter, this was a first!

Actually Carrie built his character, and when my dad asked what a "minotaur" was, we had to sadly break it to him that it wasn't the same as a centaur.  In fact, we told him to think of the Chick-Fil-A cow, but clad in chainmail with a giant warhammer and some spears.  But no matter, he seemed content with that answer, and thought the name "Fred" was perfect. 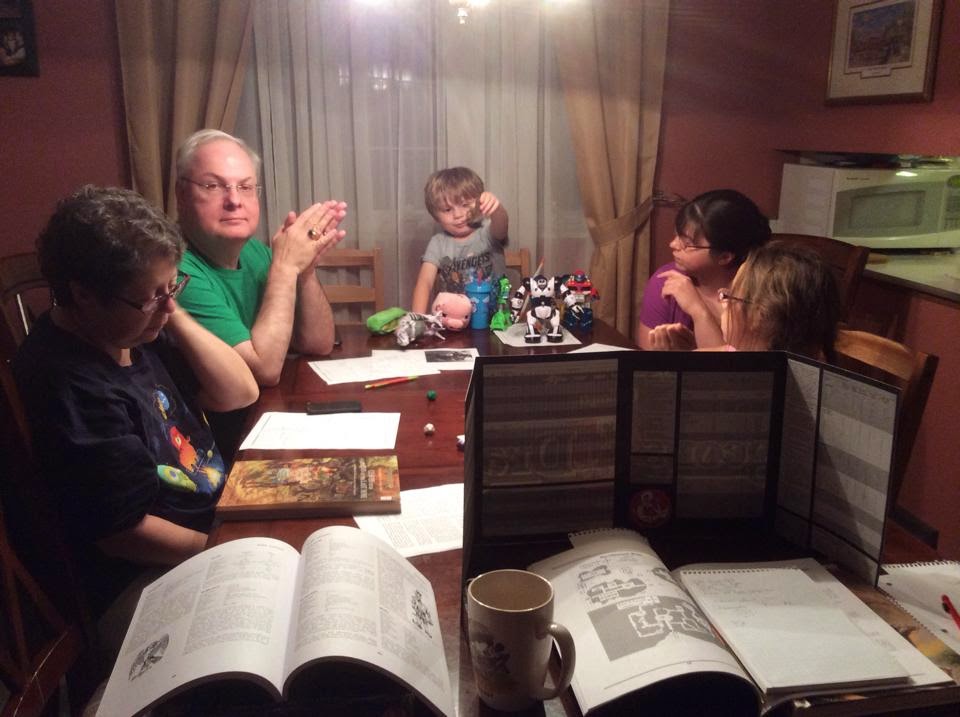 So besides our Hatchling Brass Dragon named The Killer and Fred the Minotaur Fighter, we had three other PC's in this session.  My wife Jen broke out her famous (at least in our family) character from previous sessions, Eric the Cleric.  Evie loves all things cute and pretty, and when she saw an Elf Fighter/Magic-User ready to go she named her Emeralda.  Finally my mom (aka Nini) is really short (like 4'11") so I told her she was going to play a Kender Thief who she named Lulu.  I'm a terrible son. 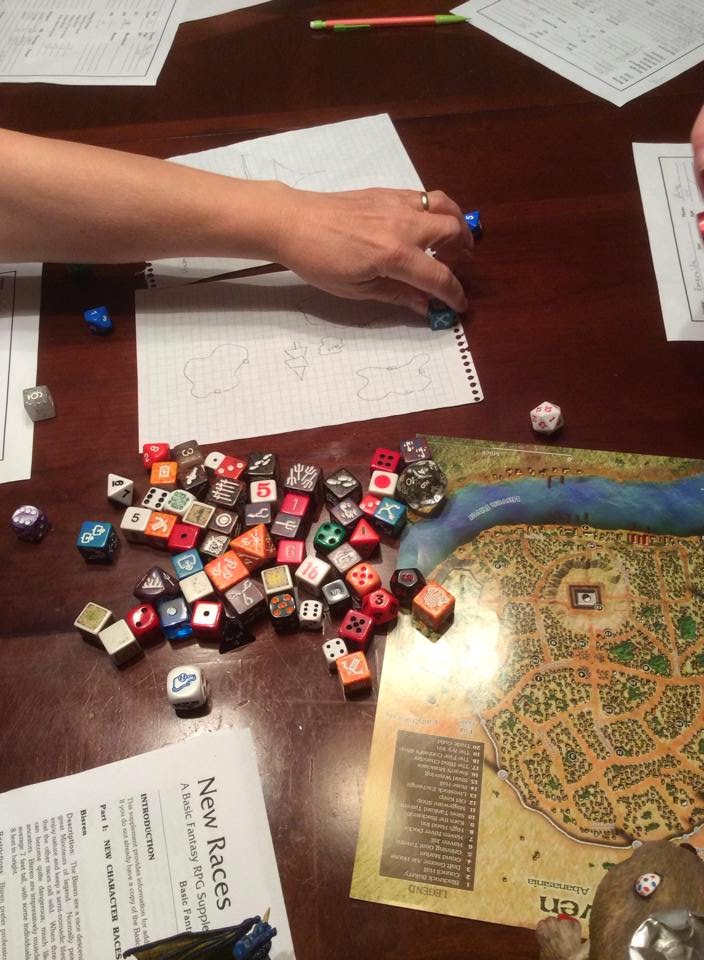 
Our brave band of adventures were assembled at the Tavern of Guinness located within the city of Haven:  Lulu, Fred, Eric, Emeralda, and their hatchling dragon who loudly proclaimed just after hatching that his name was "The Killer."  While enjoying their flavorful beverages a disheveled dwarven elder crashed through the tavern door gasping for breath.  He was bald and had a grey beard but strangely enough sported bright red eyebrows.  Seeing that an obvious adventuring party was in the establishment, the dwarf introduced himself as Coomoronth of Gribbnock, and his hill village of Gribbnock was in trouble!  Coomoronth explained that a horrible chicken woman (most likely a harpy) had came out of a giant hole that suddenly appeared in the center of the village and enchanted the entire town.  She also brought with her a horde of ill-tempered animals, such as giant toads, that infested the small enclave.  The elder offered the party 100 gold pieces, but Lulu and Eric balked at this deal.  Lulu wanted more money and Eric wanted to be proclaimed as the new high priest of Gribbnock if the party was successful.  Coomoronth agreed to these terms, and wished the adventuring party good luck. 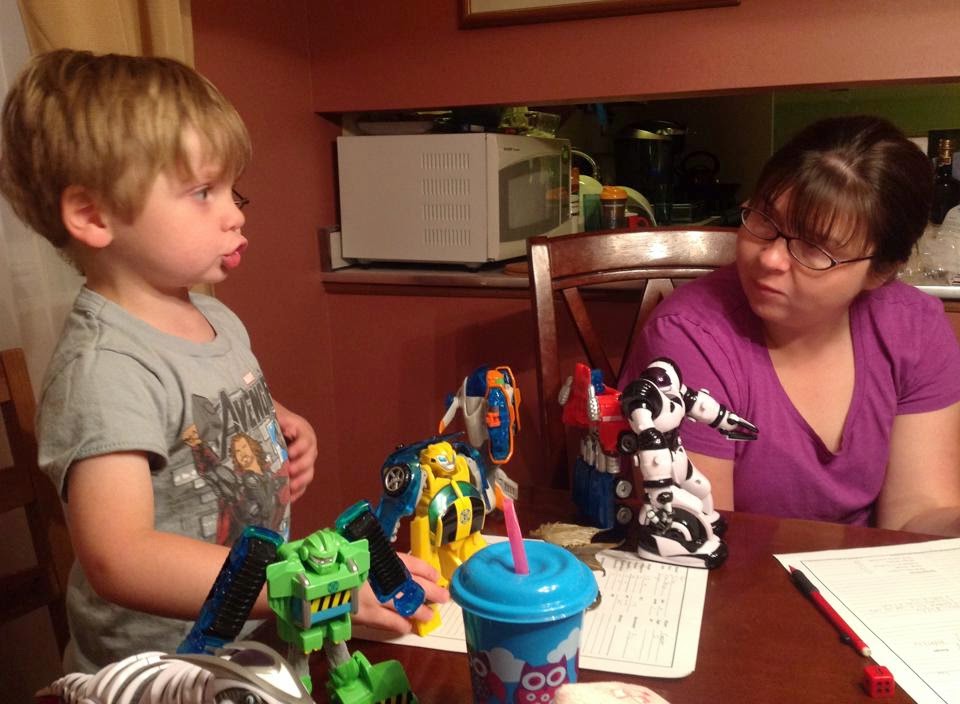 When the party reached Gribbnock they were immediately attacked by stirges!  After The Killer sprayed these beasties with a blast of hot breath, Fred charged full speed ahead but missed with his horns (and the stirge screamed olé!)  Eric, Lulu, and Emeralda waded into the floating bat-bird-mosquito hybrids swinging maces, slinging stones, and firing arrows, but despite finishing off five of the six creatures, there was one pesky bug that just wouldn't die.  The awful creature sucked blood off of both Eric and Fred, but with a well-timed claw attack from The Killer, the flying bloodsucker was finally slain. 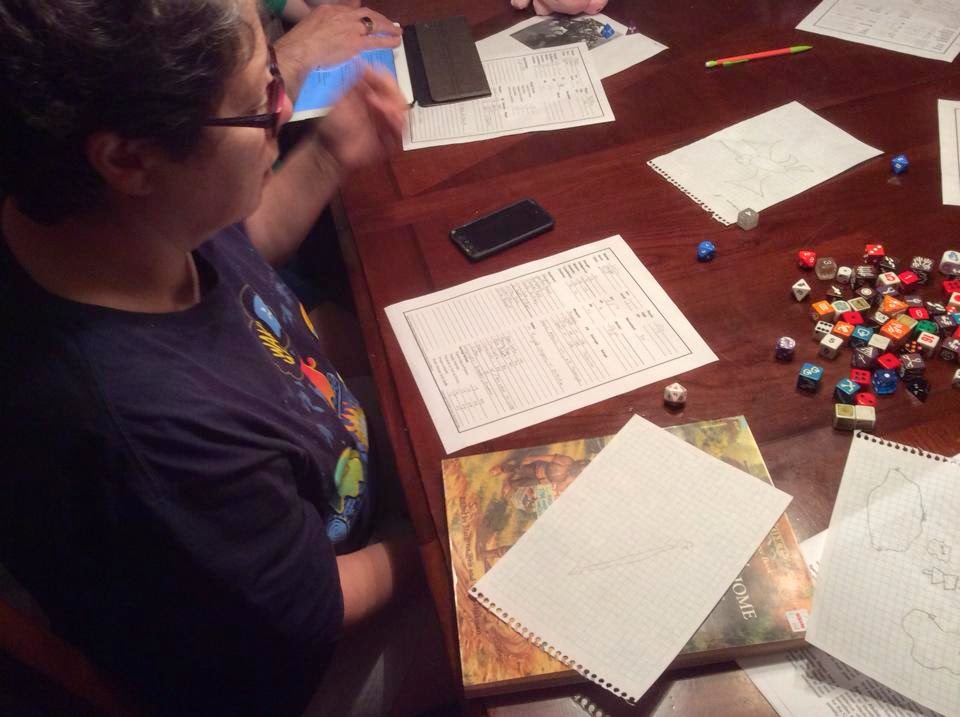 The party chose to enter the largest of the village's houses, hoping that the Harpy and her minions were located therein.  Unfortunately the door was locked, and Lulu was a rather terrible thief (like most at 1st level actually).  When the kender failed in picking the lock the party again turned to The Killer who blasted the door with hotness allowing Fred to bash through.  The house was dark, so the minotaur put his maul away and whipped out a torch and spear. 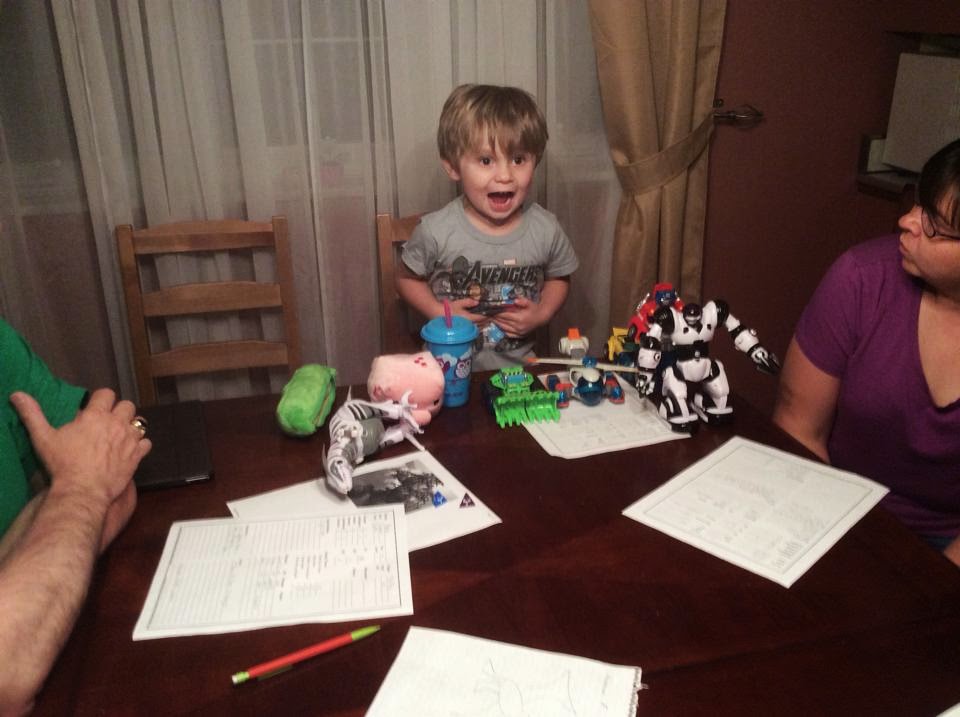 There were two passages to the left and ahead, but three doors on the right.  The first two doors led to nothing but the third door had a clucking chicken-woman (Harpy) that was ready to charm the party into doing her bidding.  She also had three giant toads ready to leap.  After taking a blast of hot breath from the party's resident brass dragon, and getting missed by the minotaur (who missed a LOT), the Harpy was successful in charming Fred, Lulu, and Eric.  Emeralda was pretty good with her bow, however, and between her arrows and The Killer's killer claws of death, the Harpy croaked leaving her giant toads behind.  This of course freed the three charmed heroes, allowing them to battle the remaining toads and surge ahead to victory!  Returning to Haven the party received their rewards and prepared themselves for future glory. 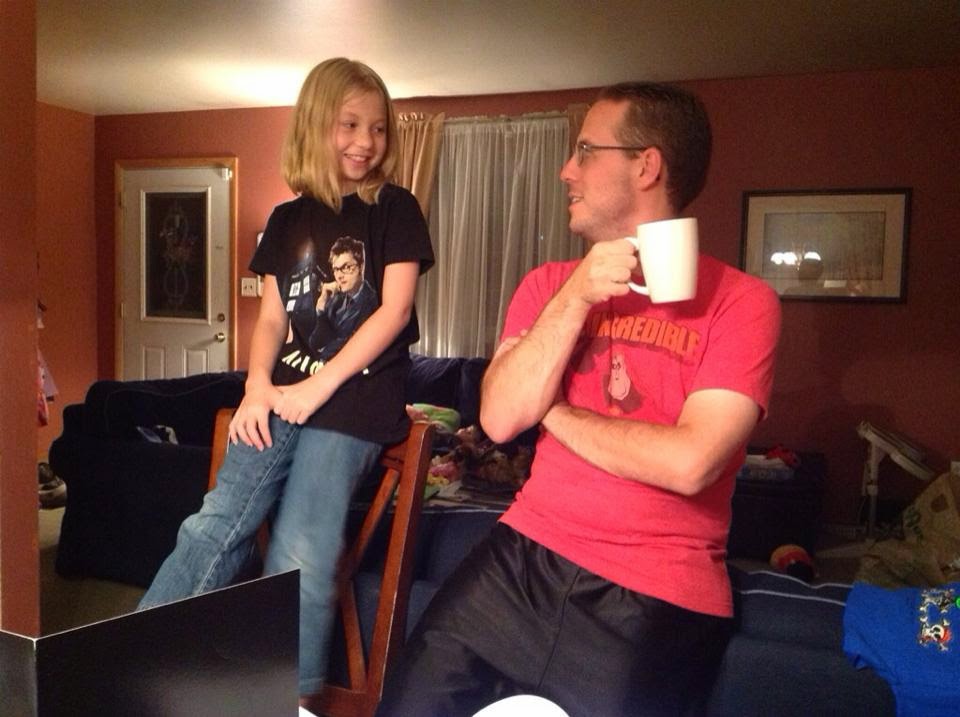 It was a great night of firsts… Carrie behind the screen, Cooper's dragon, and my dad as a cow-headed knight.  I've invested a lot of time these last few months trying to enlist new RPG'ers, showcase our hobby to the masses, and engage lapsed-gamers into regaining their passion.  This of course has allowed me to meet new gamers and get more involved with the gaming community as a whole.

But for a "kid" who's been waiting to play Dungeons & Dragons with his dad ever since 1990, last night was truly a one-of-a-kind experience.