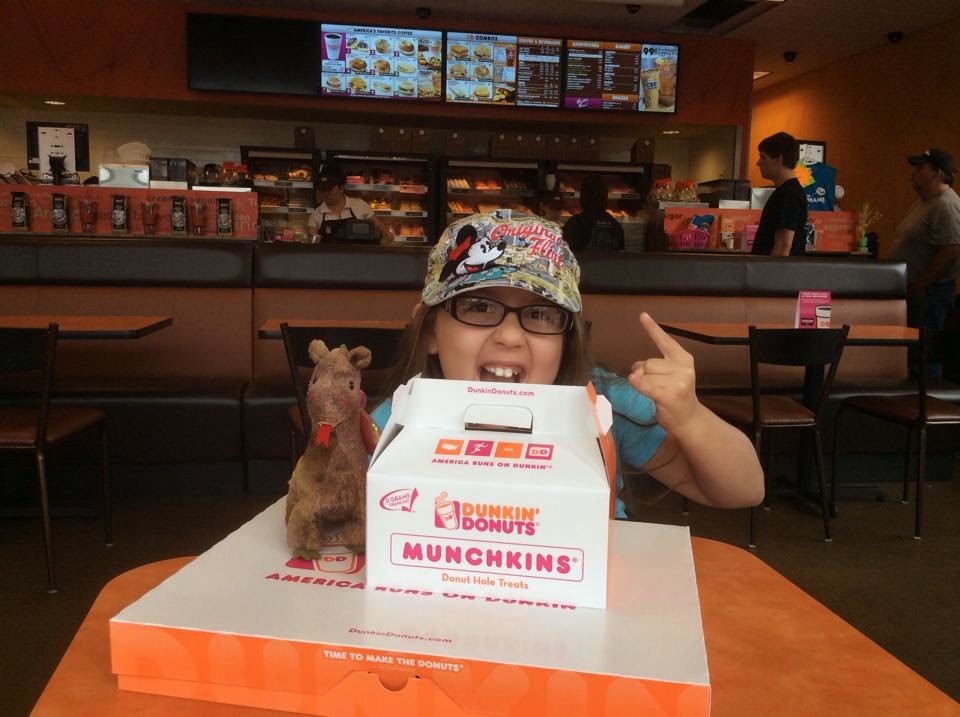 Gaming is the Breakfast of Champions

My parents live in Delaware and they wanted to get on the road early today, but not before we gave our little mini-campaign a second try.  Initially we were going to play last night but the kids were getting tired, and we felt it best to play when everyone was well rested.  But we'd have to play early, which meant "breakfast gaming!"  So my daughter Evie and I got in the car this morning and drove on over to Dunkin Donuts for a dozen of the evil little circles and a box of munchkins.  We got home, found the gaming books, made some coffee, and prepared for another epic series of encounters. 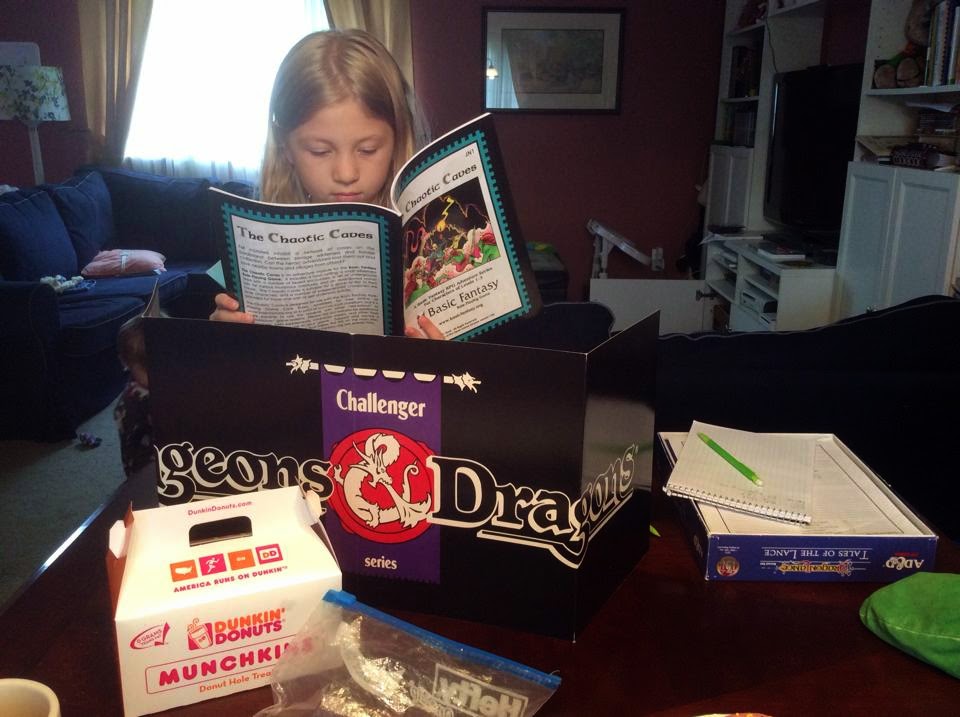 Getting ready for an adventure!

Just as with the last game, Carrie and I were going to Co-DM.  I gave the backstory for the adventure and Carrie took the driver's seat for the encounters themselves.  We set the adventure in the area surrounding Haven again, but were using a map from the The Chaotic Caves, a Basic Fantasy RPG adventure that you can get from here for free!

We learned some interesting things in this second quest:

1)  Dragons have all kinds of interesting gear with them at all times
2)  If you make my wife's character angry, she will burn your house down
3)  There may be consequences to killing off your parents' characters

If you missed the session report from our last Dragonlance game, which just happened to be the first game for both my dad and my son, feel free to give it a look right here! 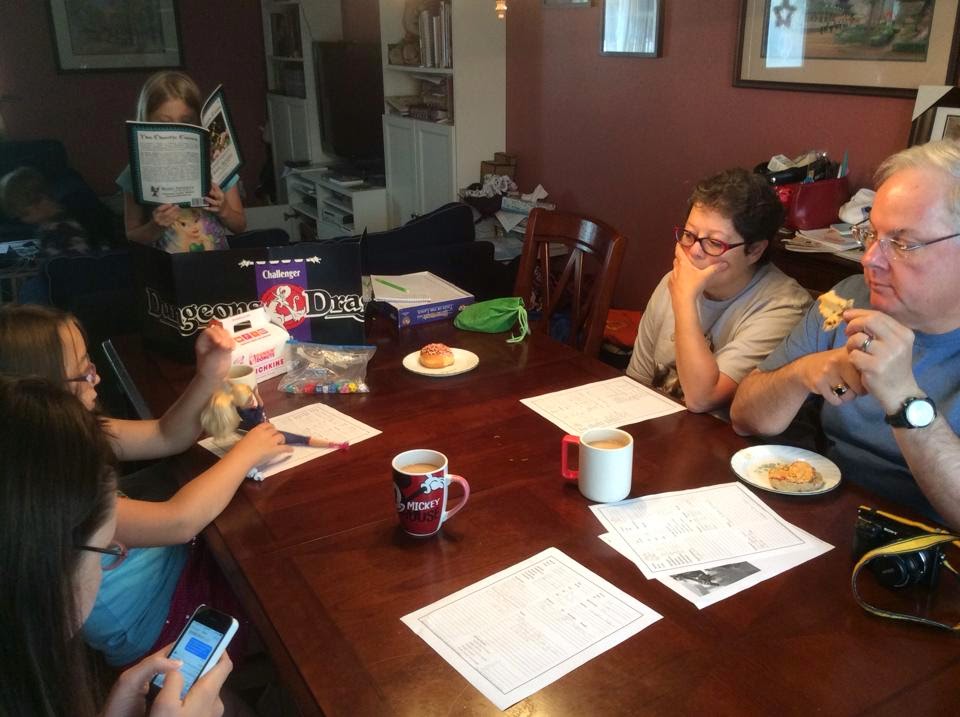 As a refresher, here are our groups'  characters:

In our last adventure the party took on the job of clearing the dwarven village of Gribbnock of a vicious harpy and some of her creatures.  Well even though the dwarven mayor paid for the work that was completed, he expected the adventurers to delve into the hole from whence the harpy came… just in case there were more monsters waiting to take on the village once the adventurers left.  Our brave band of adventurers agreed to this request, figuring that maybe there would be some cool gear stored by the horrific monstrosities below, and set out for Gribbnock village for round two.

The first challenge to the party was the hole in the ground.  Fred brought along some rope, and held the one end while the rest of his team climbed down.  The first one down was The Killer, the party's hatchling brass dragon with a fierce temper and bad attitude.  The Killer (keep in mind, played by a 4 year old) reached the bottom and pulled out flashlight.  Although we couldn't find it on his sheet, the player confirmed that he indeed had a flashlight in his backpack.  Because dragons have backpacks too. 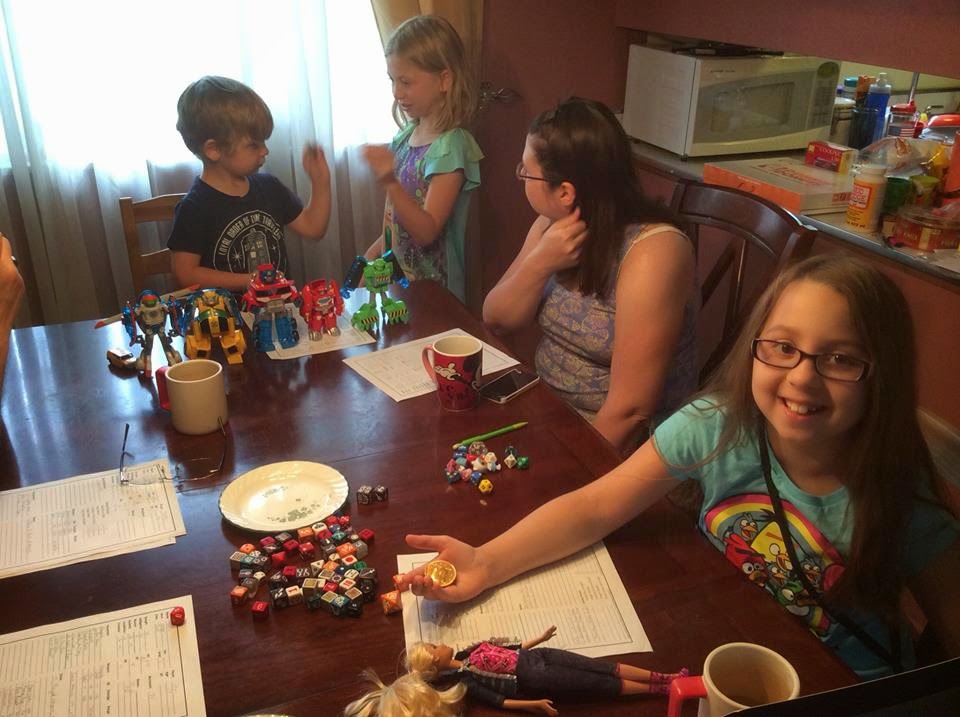 Cooper plays by his own rules

The Killer waited for Lulu to climb down next, followed by Emeralda, Eric, and Fred (who fell and lost nearly half his hit-points.)  The dragon carefully moved down a passageway, with flashlight in hand, until he came across a horrific smell.  Ahead of the party was an ogre's lair, and the deadly beast was clutching the carcass of a bear.  The Killer looked back at the party, telling them to hold up, and then drew his sword.

Because all dragons have swords.

Emeralda found a secret door to the right, however, giving the party the opportunity to flank the difficult monster.  Since The Killer was the de facto party leader (to be fair it was Cooper's birthday, so why not?) he commanded his crew to use the secret door and enter the tight confines of a winding maze of caverns.  The party moved through the maze, The Killer in front, and Lulu right behind him looking for traps.  This process worked fine for a little while until the party's kender thief didn't find a collapsing ceiling trap!  Rocks rained down upon the two party members in front, but The Killer escaped injury mainly because he was wearing a helmet.

Because all dragons wear helmets.

The cave-in definitely made forward progress difficult.  The passages behind them were long and still perilous, so the party didn't seem interested in backtracking.  But it was no problem whatsoever, as The Killer was quick to pull out the shovel he carried around (in his mouth, apparently) and command Fred to start digging.

Because all dragons carry shovels.

In the cavern adjacent to the cave-in there was a great deal of moss, slime, and fungus all over the ground and covering the walls.  The Killer, flashlight and sword in hand, entered the room without any attempt to conceal himself.  The rest of the team entered, looking to see if any loot was on the ground or tucked away somewhere.  But they didn't see the giant locusts!  Infesting this particular cavern, these horrific beasties were just waiting for another meal, and six of them sprang out spitting horrible acid at the party.  With the exception of The Killer, everyone was covered in burning acid spit, eating through armor, gear, and clothing.  The Killer felt that his sleep gas was necessary, and breathed a huge blast of the halitosis-laded spray upon the insects, putting all but one to sleep.  Fred wasn't going to let his dragon team member get all the credit though.  Wiping the nasty slime from his snout the minotaur fighter charged forward and gored the last remaining locust. 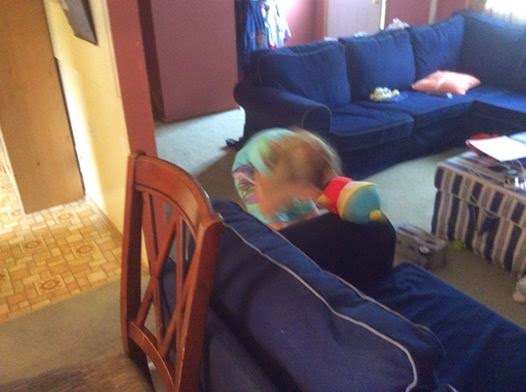 With the locusts gone the party entered the chamber directly behind the fungus room.  All of the moisture keeping the molds and slimes alive must've been coming from the pool at the center of the room.  On the other side of the small pool was a muddy shore, with a bone scroll case sticking out of the ground and a small raggedy sack resting at its side.  The Killer flew over to the other side, saw that a venomous sea snake was coiled around the pouch, and returned to the rest of the party.

The Killer the told everyone it was safe.

So Fred swam across the pool and also saw the snake, but the minotaur wasn't about to let a small little serpent scare him.  In fact, Fred tried to eat the snake by biting the creature.  Unfortunately for Fred, the sea snake was horribly poisonous.  It bit the minotaur's head and killed him instantly.  Eric and Lulu killed the snake with stones and arrows and then grabbed the poor dead minotaur, dragging him back to the entrance to the room.  Eric read the scroll, saw that it was for Cure Light Wounds spell, and cast it on himself.  In the sack was five-hundred silver.  With one party member dead, it was time to get the heck out of the caves and see if there was a way to bring Fred back to life. 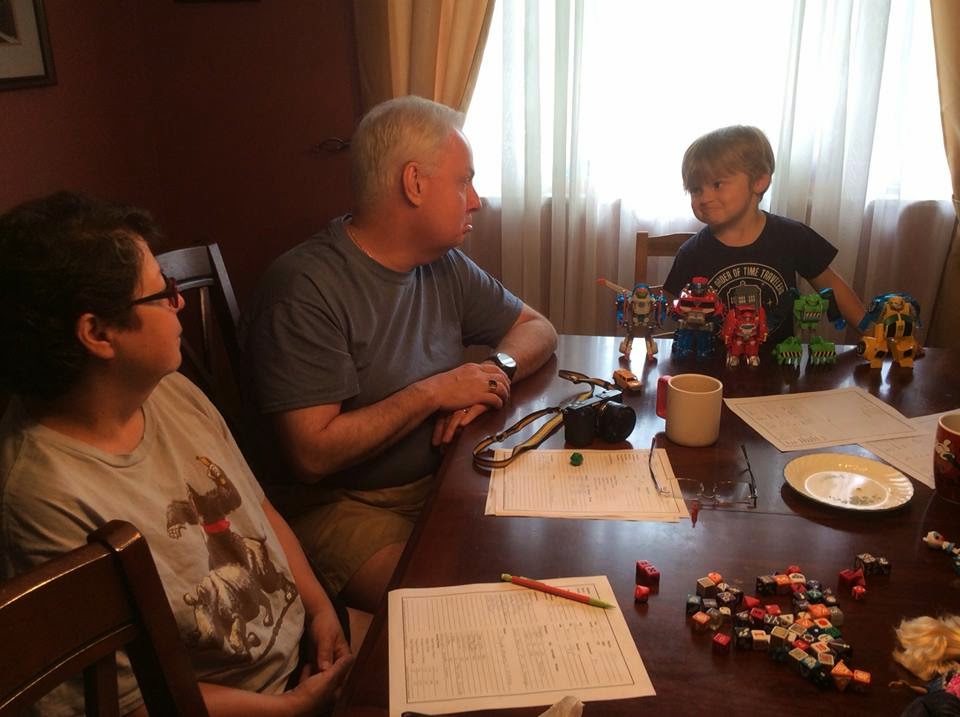 Returning to the start of the cave network the party needed to climb back out of the hole.  It was only 20 feet up, which would've been an easy climb for Lulu, who was going to take the rope to the top and tie it to something.  Well Lulu fell and died.  She didn't die instantly, but Eric had used all of his healing magic and the only scroll, so Lulu was a goner.  That was two bodies that needed to be returned to Haven.  The Killer grabbed the rope and flew up the hole, helping Emeralda and Eric back to the top.  Working together the three remaining characters pulled Fred and Lulu's bodies back to the surface, but didn't have a means of carrying them back to Haven.  That's when The Killer reminded the party that he brought his wagon along, you know, the one he pulls around all the time but had to leave outside the hole.

Because all dragons have wagons.

Back in Haven Eric found a Temple of Paladine and begged his boss, Derrick, to resurrect his two friends.  Derrick told Eric that this could not be done without a significant donation to the Church.  Eric didn't have enough cash, and asked for a favor, which Derrick also denied.  Eric then tried to intimidate Derrick, pointing to The Killer and suggesting all the terrible things that could occur should Derrick not back down.  This didn't faze Derrick, nor did the blast of heat from The Killer, which the high-level cleric was able to withstand.  So Eric went outside and burned the building down.  This of course got the attention of a passerby: an evil cleric of Tahkisis.  The evil cleric gave Eric one look and said "I like the way you move."

So the evil cleric offered to use a spell called "Reincarnate" on Eric's friends but he'd owe a big favor.  Eric agreed to this, because that sounded just like Resurrection, and what's the difference, right?  The Killer, Eric, and Emeralda waited around until the spells were cast and were reintroduced to their party members:  Fred the Half-Elf and Lulu the Hobgoblin. 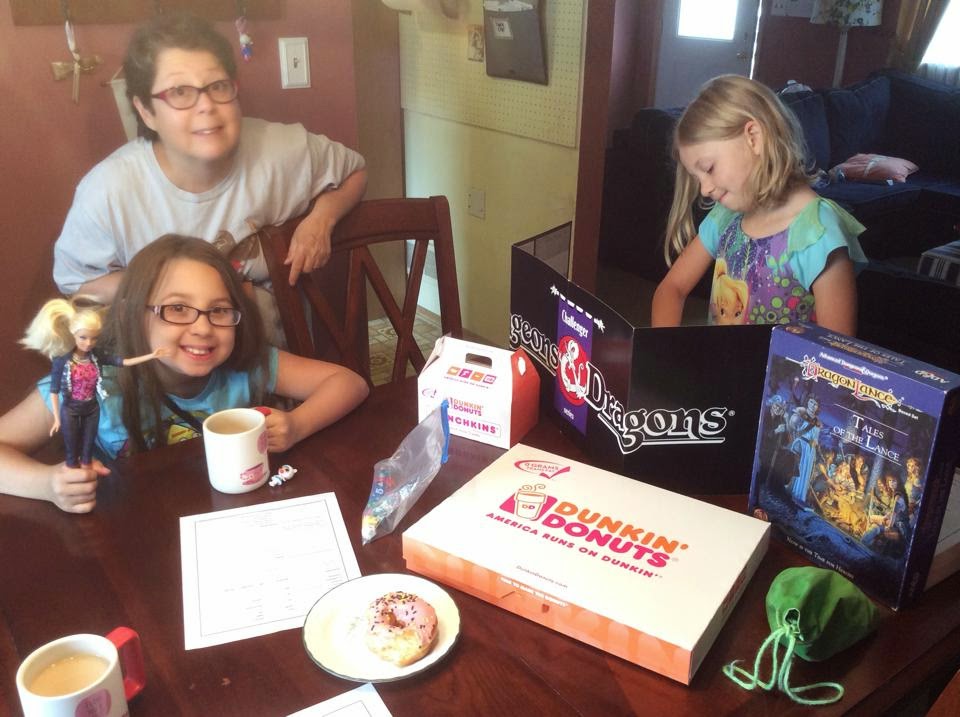