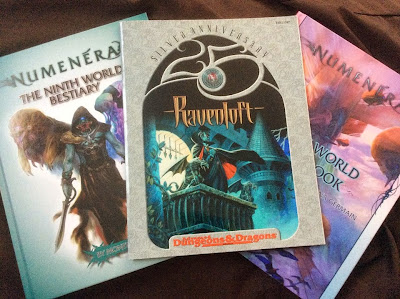 They're Not Dead… Yet!

I have to give my players some serious credit.  I really did throw the "kitchen sink" at the team during this session.  The two encounters they experienced were incredibly brutal, and every engagement with Lady Von Zaro, a 10th level creature, has the potential to cripple this adventuring party.  But I also happen to be playing with a team of seasoned, 4th and 5th tier characters, controlled by some quick-thinking players.

Hat's off to you guys!

To make matters worse, I've spent the last three sessions of Rasterperch Keep keeping a very close eye on everyone's stat pools and recovery rolls.  It's not that I distrust the players, but I just want to make sure everyone knows that each point of Might, Speed, and Intellect is very precious.  I also want to show how the opportunity for rest is severely limited, if not completely absent.

Who wants to take a ten-hour recovery roll in a land where even the trees can kill you?

My inspiration for this comes straight from one of my players:  Frank.  Frank ran the D&D 3.5 Edition of Expedition to Castle Ravenloft for me and some friends back in 2009.  I remember playing a Human Wilder/Paladin, constantly having to watch my psionic power points because I knew I wasn't getting a "recharge" any time soon.  Frank ran Ravenloft as a desperate, fever-pitched struggle where the players characters had no opportunity to rest or regroup.  I wanted to do the same with Rasterperch Keep…

… I wanted my revenge on Frank.

If you missed our last adventure, you can find the summary here.

Enduring several hours trapped within the “head” of a long-dead Latos, infested by an amorphous, emotion-draining vampire, sure does take a toll on a party.  For Takkorek, Chase, Ralyx, Glyquorg, Jak, and Garren, this new and alien “world” was incredibly hostile.  Clearly this wasn’t a place that they could survive, not in the long term, and so the party would have to make every effort to escape.  Putting their heads together, the group took stock of what they knew about the “Afterlife", as the locals seemed to call it:

Although there was some discussion about burning down or destroying the large temple in the village, so as to prevent the townsfolk from chanting, the party instead decided to investigate the massive cliff.  A thousand-foot tall, two hundred foot wide cliff was actually a mesa that served as a pedestal for a great, archaic castle.  From the treeline near the mesa, Ralyx’s keen third eye could make out several interesting structures.  There were several small ledges that could be used as resting places while traversing the steep cliff face.  Closer to summit, at the point where the mesa met the castle wall was a great balcony overlooking the Afterlife, and just below, built into the rock, was a smaller structure with blacked out windows.  Halfway up the mesa, a large, ten-foot wide metal object orbited the stone, trailing thousands of smaller metal chunks in a slowly spinning ring.

Although the team of numenera hunters searched the base of the mesa for a hidden entrance, none were found.  Rather than find another entrance further up in the western hills, the party decided to scale the mesa.  But by this time Takkorek had disappeared again, along with his ability to create portals.  The Slacker Nano no longer trusted the party after losing his emotional ability to do so.  But Ralyx was able to engage a “far step” trick of the trade, allowing for near instantaneous teleporting of two-hundred foot distances.  Furthermore, Chase had the ability to hover.  Between the Jack and the Nano, they could bring the rest of the party up the mesa in groups of two… but this meant that someone would have to stay behind and wait.

Before they could start climbing, the team needed to take a break for Garren.  Apparently the Varjellen was again “pregnant” with an egg in his chest cavity.  Using his surgical tools, Garren cut the egg from his chest and placed it on the ground.  Well Glyquorg wasn’t waiting around for another creature to cause the party grief. The Exiled Jack slammed the heel of his boot on the egg, forcing a small, pale creature to burst forth.  Claiming to be called “Pokmal”, the tiny entity begged for its life, but surrendered precious little information.  Since Pokmal hadn’t the time to hatch properly it died within minutes.

Once Garren caught his breath after giving birth the team readied itself for a climb.  Ralyx far stepped while carrying Jak, and Chase hovered while carrying Glyquorg.  Garren would wait for the next ride before the party followed the same format.  Making their way to the first ledge was easy… but the second proved difficult.  While far stepping with Jak, Ralyx landed on the ledge nearest to the floating, orbiting piece of metal.  As soon as the Mlox Jack landed, the floating hulk blasted him with a barrage of laser beams.  Immediately the Brilliance reappeared and everyone started to smolder.  Chase grabbed Glyquorg and started hovering towards other two party members, but this left Garren behind…

… and the Varjellen Glaive was about to have an encounter with Lady Von Zaro!

The inky black entity pushed two wispy tendrils into Garren’s flesh, sucking out a massive amount of life-force, along with several emotions.  Not wanting to completely kill her food source… at least not yet… Lady Von Zaro retreated back into the side of the mesa.  Garren took one look at his team fighting the orbiting metal heap, and just slouched against the wall to catch his breath.  He was sitting this fight out.

Glyquorg quickly turned off the “lights” using the Chant of Brilliance, and then led an all-out missile assault on this construct, an ancient machine that was known as a Dedimaskis.  Chase was able to engage his “open” esotery to bring down the defenses of the Dedimaskis, which degraded its armor.  This created the perfect opportunity for the rest of the party to lob javelins and fire arrows at the automaton’s weak spots.  Once the Dedimaskis broke down, it collapsed on the nearby ledge in pieces… pieces that Chase knew could be converted into Cyphers!

Once rested and restocked, Chase used his remote viewing ability to check out the windowed structure and the balcony above.  Inside the window structure was a shrine, and at the center of this room was a mound of dirt.  But what truly caught Chase’s interest was the patch of moss growing on top of the mound.

Lady Von Zaro must have created this chamber as a tribute to her brother, but now that he had returned, she was letting him grow again.  Chase could not let this happen.  The party chose to make their way up to the balcony, but as soon as Chase hovered his last passenger, he floated back down and used an “incinerate” esotery to completely remove Raa-em from existence.

While the pile of moss burned in psychic agony, it’s “sister” appeared from inside of the castle!

Lady Von Zaro attacked in a fit of absolute rage, striking Jak and Ralyx with emotion-draining tendrils.  Given the strength and power of the entity, the party wouldn’t last long…

… and then Glyquorg had a moment of absolute genius!

Chase returned to the rest of the party, and Glyquorg repeated the chant so that the party could travel to the lower structure and the burning mound.  Unfortunately this allowed Lady Von Zaro to reappear back inside, and she lashed out at Chase and Jak as they broke through the windows.  But once inside, Glyquorg was able to sing the chant again.  Risking the wrath of the Brilliance over the Lady, the lights were left on and the entire party made their way into the lower structure.

Investigating the mound, Chase found that there were wires and tubes built into the dirt.  Lady Von Zaro may have been trying to restore her brother back to life, but she was also preparing to drain him of some kind of energy, and feed it into a device that had to be absolutely massive.  There was a door at one end of the temple… perhaps leading to just such a device.

"Andy?  Wasn't he in the port-o-potty next to the vampire?" - Andreas recalls the last session.

"I'm pretty sure that Jeremy's character would use wormholes wherever possible." - Andy trying to justify what Takkorek would do after his player (Jeremy) lost his internet connection.


"I don't know why we 'shouldn't' go up here." - Marc trying to convince the rest of the team of his plan.


"Can I take my recovery roll?  There's a reason you save them… for oh **** moments!" - Andreas was hoarding his pools … he's glad after meeting Lady Von Zaro


"So…uh…  are you guys ready to go into this balcony?" - Chase may not have been.


"Impulse rules above all!" - And Andreas is ruled by impulse.