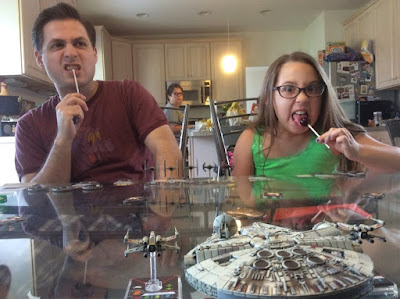 The Empire Has a Dangerous New Weapon...

On a recent trip to visit my parents, I brought along Fantasy Flight Games' Star Wars X-Wing Miniatures Game!  My daughter Evie was itching to fly again, and we thought it would be fun to play with my brother Tom.  When we were younger, Tom and I used to play Crimson Skies together, another great tabletop miniatures game by FASA.  Crimson Skies came out in the late 1990's, back when I was in college, and I spent a lot of time collecting miniatures, painting them, and sending them off to be destroyed at the Penn State University HUB.

I did a brief post about Crimson Skies a few months ago, in case you are interested.

Typically when I bring a new game to my parents house, and my brother and his family come to visit, I have the advantage.  I know the game, have probably played before, and Tom has to learn on the spot.  For X-Wing I gave tom a significant advantage... 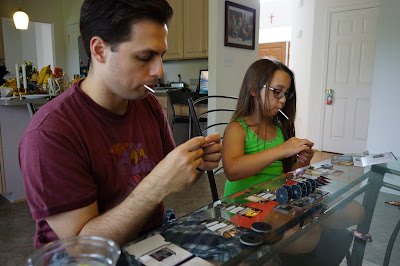 I would need a sidekick as well, especially since my two X-Wings couldn't take on five TIE's.  Carrie, my eldest kiddo, loves Han Solo, and demanded that we bring the Millennium Falcon along for the trip. 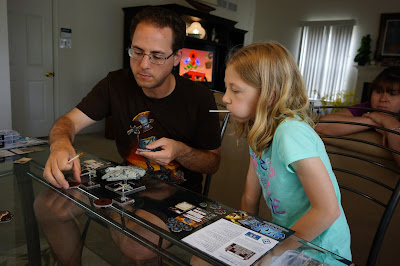 A 100 point conflict with a time limit... pretty much when the younger kids started getting bored of watching TV the game would end.
For one of the first times we actually picked our ships based on what could be perceived as "tactics!"  Evie wanted a whole bunch of TIE Fighters, but insisted on taking her two of her brand new TIE Interceptors.  Since she wanted Mauler Mithel in the game, but wasn't playing him herself.  So she told her Uncle Tommy that hew would be playing as Mauler.  There was no argument.  On the Rebel side, Carrie's favorite ship is the Millennium Falcon, and she likes having a turret.  I figured that a pair of X-Wings, even if they were less skilled, could do a good job picking off the weaker TIE's in combat.
Something we tried for this game was to make a list on paper of the turn order.  For this many ships we had on the table, it made the game move a lot faster!


My dad took all of the "good" pictures for this update, but they aren't clearly based on turn-by-turn action.  So this summary will be brief, but should showcase how wonderfully detailed the Fantasy Flight figures look. 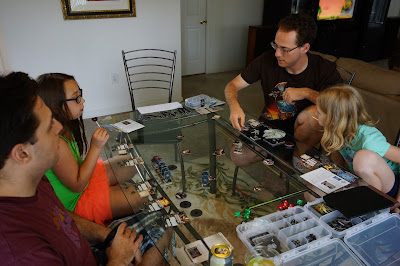 The Rebel tactics were pretty simple: don't get overwhelmed.  I thought we would try to split the TIE's up.  If my X-Wings could focus on knocking out one or both of the TIE Interceptors, perhaps Carrie's Falcon could snipe the regular TIE's.﻿ 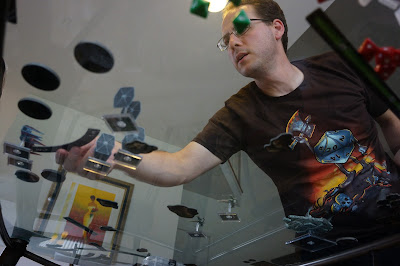 My dad had some cool pictures from under the table.  I was helping my brother with his movements, and learned very soon that the TIE's weren't splitting up... they were coming forward as a unit! 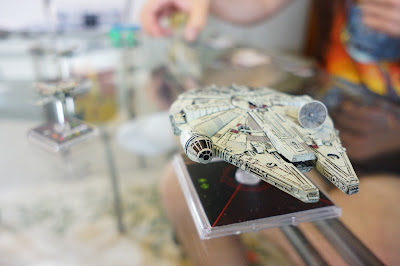 We still went with the plan. 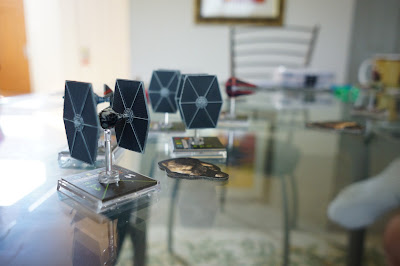 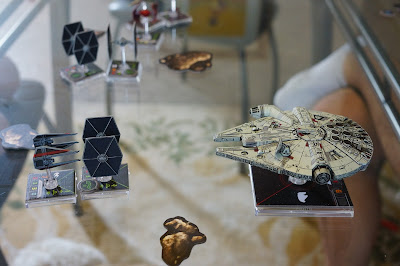 On one side of the board, two TIE's and a TIE Interceptor knocked the pants off of Biggs.  Although he wasn't a goner... not yet at least... he had to disengaged and flee the dogfight. 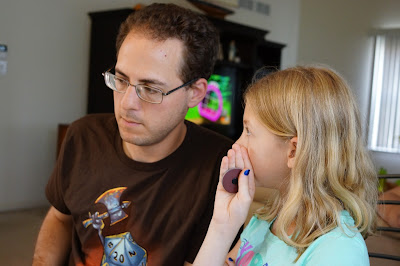 Carrie and I were trying to be secretive in our plans, and it actually worked!  We managed to take out one of Evie's TIE Interceptors. 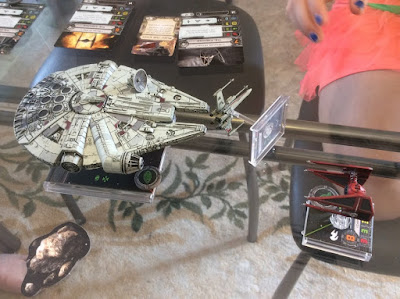 With the game coming to a close (we were on a time limit) I told Evie and Tom that the only way they could get a victory was with a kill.  Well Evie, as always, delivered. 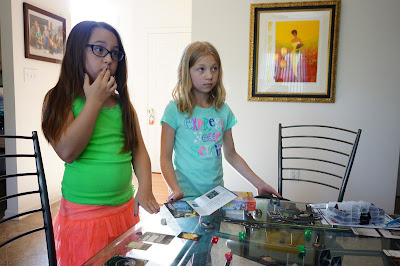 Initially everyone left the table thinking we had a... "tie" game.  But going by score, the Imperials took out more points worth of fighters (the X-Wing, Biggs, was worth more than the TIE-Interceptor).