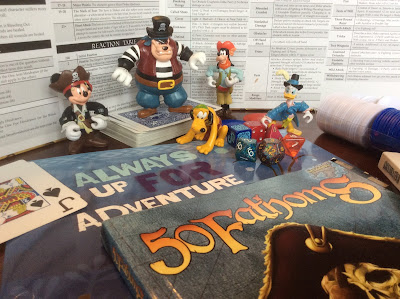 Hunting for Doubloons… or Donuts… Either, or…

After an exciting kickoff for our family's Savage Worlds 50 Fathoms campaign we were trying to think up a way to make the next session equally special.  Since the game was going to be held around lunchtime, and my kids are Dunkin Donuts fanatics, we decided to incorporate some special snacks into our event.  So I gathered the children, and had them each put on something piratical.
All three kiddos had pirate themed shirts, Evie had some pirate mouse-ears from Disney, and Cooper had his wooden "boarding axe" and a spyglass.  Since Carrie is eleven now, I didn't want to embarrass her too much just in case we ran into her friends.  I donned my favorite silk bandanna, a relic from back in 1994 when I played the Pirate King in our junior high production of The Pirates of Penzance!
All four of us jumped in the family SUV, and I popped in the Walt Disney World Resort Soundtrack.  I skipped ahead to the Pirates of the Caribbean theme and started blasting the music with the windows down as we set out on route 30...
... it was time for some tasty treasure hunting! 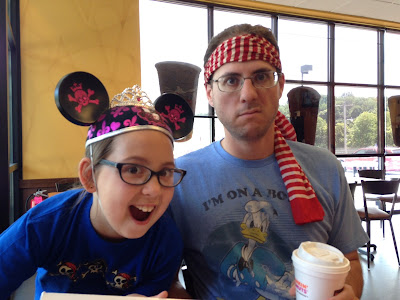 When we walked into the Dunkin Donuts the cashier just smiled.
"Having fun today, are we?" she asked as the kid started shouting out their donut requests.
Since we live in Pittsburgh, its entirely possible that she just figured we were crazy Pittsburgh Pirates fans.  I was waiting for one of the girls to explain that we were gearing up for a role-playing game at our house, but they were too interested in donuts.  We ate our donuts in the restaurant and got a couple of smiles.  Maybe next time we'll break out the dice and start playing right then and there! 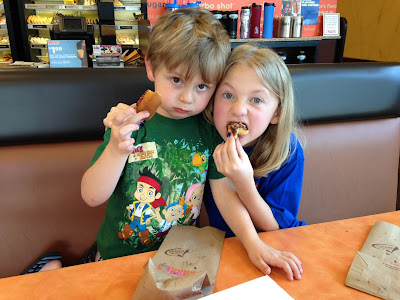 The Brave Crew of the Titanic Nemo 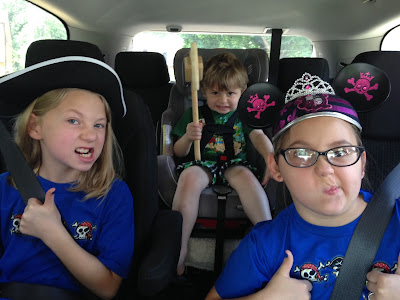 
Rather than search the massive island of Torath-ka any further, Captain Jacqueline Crane decided to cast of and leave the Savage Land as soon as possible. The clockwork fox, Foxy, had just finished chopping down his fourth tree (to trade later) when the order was given. Quickly the tiny crew of the Titanic Nemo packed up their belongings and set sail under a billowing, serpent skin.

As Captain Crane maneuvered her small ship through the dangerous reefs and shallows, she asked her crew for advice on where to go next. A wanted pirate in Kieran waters, the Captain preferred to stay away from that side of Caribdus. Skylar Shipshape had an itch to visit Brigandy Bay, and noted that the voyage should only take ten days or so. Dori agreed that Brigandy Bay was a worthwhile option, and Foxy didn’t much care.

… and so the Titanic Nemo was bound for Brigandy Bay!

The small skiff had a single mast, and was not a choice vessel for long voyages. But still, with the frigate Rebecca destroyed, the Titanic Nemo was the only option remaining. At least the party’s captain was an accomplished Air Elementalist. With her “Zephyr” spell Captain Crane was able to provide additional winds to steadily move the ship through the waters. By the third day of the voyage, the Titanic Nemo was nearly halfway to Brigandy Bay!

Skylar Shipshape called for the vessel to stop on the afternoon of the third day, after sighting something strange a mile ahead. Using Dori’s spyglass, Skylar spotted the wreck of another craft. On top of a large floating pile of debris was a single Scurillian, a “crab-man”, desperately trying to huddle on top of some lashed wooden beams. Captain Crane was cautious, and didn’t want to risk the skiff on some kind of trap. Dori the Doreen Hunter volunteered to scout ahead and see if this Scurillian posed a threat, or if he was truly in danger.

Aquatic in nature, Dori carefully slipped into the water, and with her blue-tinged skin, blended into the background. As well as being visually masked from predators, doreen skin gave off little “scent.” This worked in Dori’s favor as she approached the wreckage and saw three maneating, tiger sharks circling the poor Scurillian. With the rest of her crewmates a mile away, Dori crept beneath the lashed debris and started pulling it back to the Titanic Nemo. The sharks didn’t seem to notice, and the scurillian remained perplexed, but refused to stick his head into the waves and risk getting an eyestalk bitten.

Once back at the wreck, the scurillian started to call out questions to Captain Crane and her crew, but was told to stay still. The captain noticed the sharks, and gave the orders to attack!

Skylar Shipshape pulled her pistol and blasted one of the sleek fish into pieces. Captain Crane followed up with a bolt of wind, but instead of just hitting a shark, she also hit the debris knocking the scurillian into the water. Dori was no longer underwater, and instead swam back to the Titanic Nemo and was preparing to lob a tethered harpoon into the waves. With no one left to save the crab-man, Foxy the piratical clockwork fox dove into the water and grabbed the scurillian. Fending off one shark, the automaton made it back to the ship.

Rather than load her pistol, Skylar borrowed a knife from another crewmate and threw it at the head of a shark as it passed by. The agitated creature started to bolt away when it was concussed by another of Captain Crane’s bolts of air. The final shark tried to swim off as well, but a single thrown harpoon from Dori meant lunch for the crew.

After the fight, the scurillian thanked the party and introduced himself. His name was “Tellaris”, and he had been a Super (similar to a quarter-master) onboard a merchant ship before it was beset upon by foul Ugak magicians who rode out from the shores of Torath-ka. Tellaris was an explorer and naturalist of Caribdus, and recently learned that the entire island world was still “sinking” as the water levels were getting higher and higher each year. The scurillian believed this to be the work of the Sea Hags, and suggested that the party could possibly help save the islands if they sought out Tressa the Red at a place called “The Teeth” on the southern side of Torath-ka.

Despite the party’s newfound fondness for the dainty Titanic Nemo, Captain Crane realized that she’d need more than a skiff to save the world. Perhaps fortunes would change in Brigandy Bay. 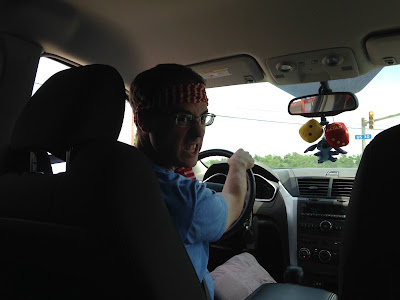