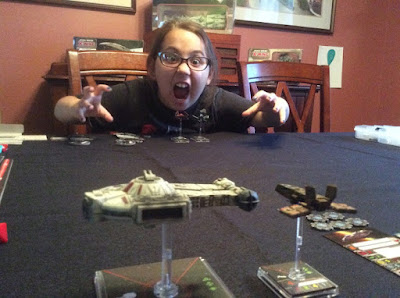 We've filmed quite a few Living 4 Crits episodes recently celebrating the glory that is Star Wars.  The kids and I have also played several exciting sessions of Fantasy Flight Games' Star Wars X-Wing Miniatures Game!  As soon as this game showed up in my house, we started talking about filming some of our games once we understood the rules well enough to not make complete fools of ourselves…

… I still don't think we're there yet… but we shot a video anyway!


Although both of my daughters have enjoyed playing X-Wing with me, Evie has really taken a liking to the game, especially the stories that come out of the battles.  I'll be honest, when I purchased that giant box of starships, I figured I'd spend a lot of time playing as the Imperials.  I know that when I was younger I never would've selected play as a "bad guys."  Evie has no problem playing as the forces of darkness.

In fact, I think she gets a kick out of it!

Even though we decided to shoot the video, I still wanted to share our turn-by-turn summary of how the game played out.

A pair of advanced TIE craft face off with two freighters carrying rebel scum goods near Hoth.
Each side was just over 60 points, and on paper the match seemed even.  I figured that the TIE Defender would be an incredibly capable craft, but I was quite surprised at the stats on the TIE Interceptor… more than a match for an X-Wing!  As for the rebels, I recently watched a Y-Wing cripple a TIE Advanced using an Ion Cannon, and I thought I'd try the same strategy against the TIE Defender here.  With the added maneuverability and movement options, the YT-2400 seemed to have quite a few more flight options than the YT-1300.

But in truth all of the ships we picked were based more on coolness than on potential use on the table.  Evie wanted some new TIE's and I've been playing Dark Forces and really wanted to fly in the Moldy Crow.  Perhaps not the best strategy when picking ships, but it works for us! 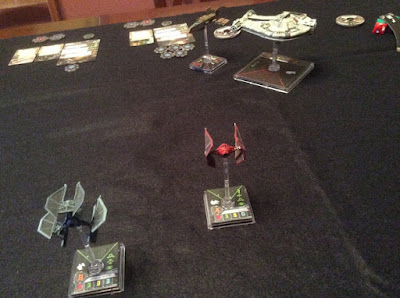 I blame the camera for my crappy first turn!  While trying to film and take pictures and talk with Evie I didn't realize that the HWK-290 is a PIG when it comes to flight.  Even banking maneuvers can stress the craft! 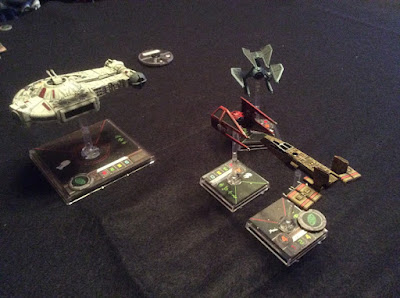 I really thought that my Rebel craft would fly past the TIE's, giving the YT-2400 a chance to pepper the Empire with a few blasts from its turrets.  Instead, Evie slammed on the breaks and moved gently towards the HWK-290… this did not go well for me!  In one round my lead ship was shot down. 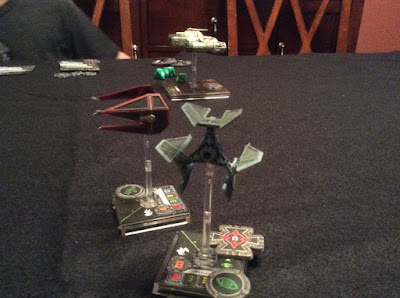 … and so began a long chase, while my YT-2400 flew around the map in circles trying to whittle down the Imperials, while the faster ships blasted my hull to pieces. 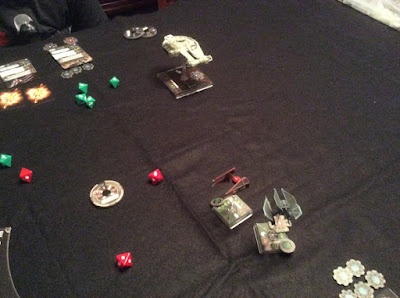 There were a few turns when I was able to land some decent shots on the TIE Interceptor, from a distance.  My Mercenary Copilot made attacks at range 3 particularly nasty! 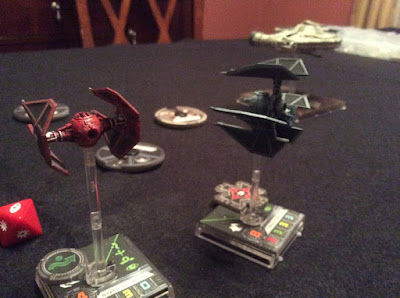 We had a turn where I actually DID outmaneuver Evie's Imperials… wow! 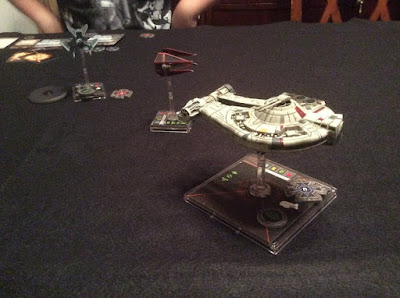 But eventually Evie did catch up… did you know that the TIE Defender can do a Speed 4 Koiogran turn?  That means a Speed 4 Immelmann! 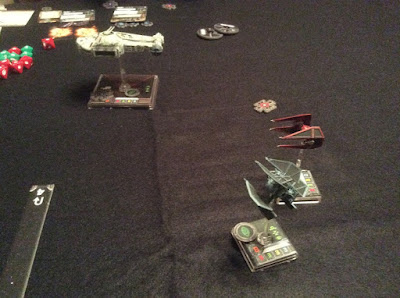 First my shields got whittled away... 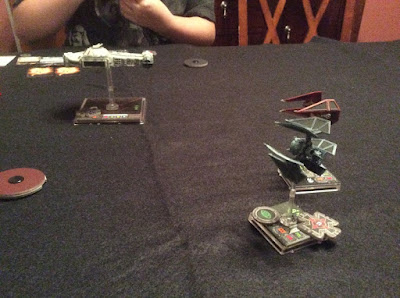 … and then some hull damage was inflicted… 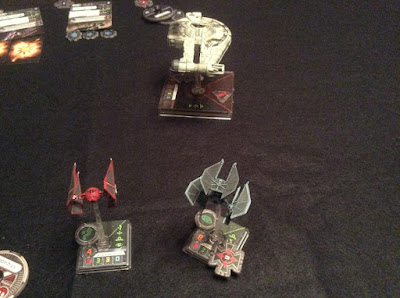 … and finally I was sent into the black alone, and without a ship.  Imperial victory!

After posting the video I received a few questions about why I keep losing in X-Wing.  Believe me, I'm not "throwing the game", but I'm certainly helping Evie develop her skills.  I gave Evie a few tips during the game, especially when it came to utilizing the strengths of each craft.  It's been great that she's taken to playing the TIE's, because she has a lot of options with regards to actions after movement.  But in truth, the ultimate tactics and strategies are Evie's!

We've already discussed our next battle and we're thinking about flipping the situation… I would play a pair of A-Wings and she a single Lambda Shuttle.  We shall see how that turns out! 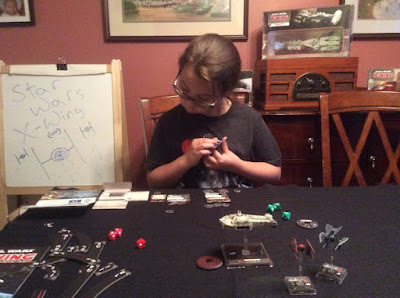