East Mark of the Vampire - An East Texas University Adventure 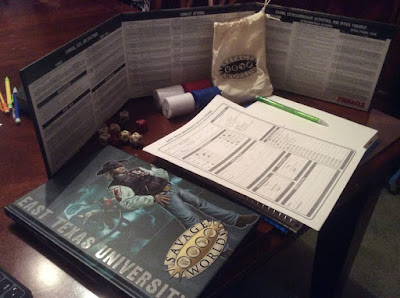 Its all in the Cards

Admittedly our last East Texas University session was a bit of a hot mess.  I believe I used the phrase "Wet Hot American Sweat Lodge" to describe the adventure, given some of my players' reaction to a campy college horror setting.  In hindsight, I think the "camp" factor comes more from my players than the original setting design.  Perhaps it didn't help that I described the campaign to my players as "True Blood meets Community."

Oh well, if you'd like to read our first adventure play report, here's the link!  I can promise that this session wasn't much better!

For our second adventure I had originally planned to run the second adventure out of the Degrees of Horror Plot Point Campaign.  Unfortunately the busyness of our Disney vacation (and all the game prep for the trip) took my attention away from ETU-reading.  The next thing I realized, it was Saturday morning, nine hours to game time, and I still didn't have an adventure prepped.

That's where the ETU Adventure Generator comes in!

This wouldn't be my first time with the East Texas University Adventure Generator.  Back in August I ran a one-shot that I titled "Someone Banish Grandma", thrown together with less than twenty minutes of prep time.  But with the fun randomness of the generator, and the craziness of my home group, I had to be ready for anything.

With my new Disney Haunted Mansion, glow-in-the-dark deck of playing cards in hand, I drew the following scenario:

From this collection of cards drawn I know that a fellow ETU student has gone missing and a vampire is involved.  The reason for the missing student is some kind of ritual linked to the vampire.  The adventure takes place on campus, and one of the player characters' significant others is involved… and that significant other is cheating… sort of...

Kara Tate is a thirty-year old goth townie well known for taking an interest in local ETU students.  An avid tabletop RPG gamer, Kara also runs vampire-themed LARPs (live-action role playing) during the fall.  In the early days of the semester, Kara runs "one-shot" adventures to figure out who would make for a good LARP'er… and who would make for a delicious treat.

You see, Kara is a vampire!

Ezra's new girlfriend, Holly Dennison, is a fellow freshman, and a member of "Ravens for Bernie," the ETU student organization that rallies for democratic nominee Bernie Sanders.  Ezra, a political activist, enjoys spending time with Holly, but knows that she needs her own space.  Recently Ezra learned that Holly was spending a lot of time with Ms. Tate.  What he didn't know, was that she was learning to play a dark and gritty fantasy role-playing game… "Adventures in the East Mark"… as an initiation into the LARP'ing fold.

After learning that two of Kara's players in a summer engagement end up missing (Laurie Squib and Dave Todd,) the expectation is that Ezra will try to crash one of Kara and Holly's meetings.

For this adventure, I set the entire scenario in Lester Hughes Dormitory, an older dorm on the southern end of campus.  For the purpose of this adventure, each of the two floors has a small community room with a pair of washers and dryers and a couple small tables.  Although ETU is a non-smoking campus, years ago these were rooms were used as smoking lounges.  Ahh… Penn State Sproul Hall memories!  To add a bit of musical "tone" to the game, I thought I'd play some old, mid-2000's emo during this scene… perhaps some Coheed and Cambria!

When the players discover the Adventures in the East Mark game, they will learn that both Kara and Holly were expecting the player characters, and that there are East Mark characters ready for "the game".

There is a weird look in both Holly and Kara's eyes.

Holly is certainly "cheating" on Ezra, but not in a romantic way.  She has learned of Kara's power as a vampire, and is willingly going along with a ritual that will help turn her into the undead.  In exchange for the lives and blood of her fellow students, Holly can join Kara's LARP and also become a vampire.

During the course of the Adventures in the East Mark adventure (The Mines in the Moorland,) a player character's player character will most likely "die."  When this happens, Kara will try to escort the player out of the room.  She will attempt to take them to a nearby dorm room, where she will try to kill them and feed.  This scene should be… interesting.  The players will most likely not be armed, and therefore will have to use their wits, and skills, to either flee the scene or thwart the vampire.

A Game Within a Game

Adventures in the East Mark is a very real role-playing game, originally titled "Aventuras en la Marca del Este," and brought to the English-speaking world by Extra Dimensional Publishing.  Everyone at our gaming table, with the exception of my wife Jennifer, has played this terrific OD&D retro-clone, which is good since we'll be switching between two RPG systems…

… that's right… I'm going to run an RPG within an RPG…

I've already detailed out the basic plot of this adventure, so I'll spare you from a second play-by-play and instead give you a breakdown of how the players tackled the scenario.  Ezra was certainly concerned for his new girlfriend's wellbeing, and he led his study group over to Lester Hughes Dorm.  I asked Ezra's player, Ethan, to describe his new girlfriend and he gave me this:

Yeah, I was hoping for more too.

What were the players "studying" on a Saturday night?  I actually queried the table for a possible class that everyone would enjoy and the response was Intro to Anarchy.  How and why this course would be taught at East Texas University, I found it very amusing that the player characters would be so fervent in their study habits for a course rooted in chaos!

Once at Lester Hughes Dorm, the ETU study group did a quick examination of the cars parked nearby.  It was late, around 9pm when we started, and I didn't want to have this part take too long, so I made Kara Tate's car be a hearse covered in Twilight bumper stickers.  By this point in the game the Hot Topic references were flowing quite freely.

I know, this was terribly cliche, and I apologize.  It certainly grabbed the player's attention, and they were able to examine the vehicle, discovering a list of names that included everyone in the group as well as "Kara" and "Holly."  There was also some dispute over "Team Jacob" or "Team Edward" between the players.

Chaz led the team into the dorm, and eventually they all found themselves on the second floor in front of Kara and Holly.  Kara invited everyone to sit down for a "tabletop role-playing game experience," and one by one the group agreed.  Elle demanded that her dog Bruiser be given a PC, and Kara was happy to oblige.

Since Adventures in the East Mark comes with a set of pre-generated characters, I was ready to go with this part.  I even emailed Emily her own sheet prior to the game!


The table got loud when I threw the big, red, Adventures in the East Mark box on the table.  There was a lot of eye rolling, and a lot of laughter especially when the players realized that I was literally going to run an old-school RPG "inside" of a Savage Worlds game.  The only addition to the Adventures in the East Mark rules were that I allowed the players to use their bennies to reroll in both "systems."

For about fifteen to twenty minutes the group's Savage Worlds characters played Adventures in the East Mark, all while in character.  Everything was moving along very well until Jen's character's character (Greybold Grimbeard) died from a wolf's bite.  Kara insisted that Elle leave the table, and she tried to take her into another room while Holly continued as the group's GM.  Here's where the game returned to Savage Worlds.

Kara tried to charm Elle at first and then overpower her, forcing her into a room that stank of old blood and gore.  Elle resisted and whistled for Bruiser who tried coming to the rescue.  When the rest of the study group realized that Elle could be in trouble, they all left the table and went looking for the group's blonde-pre-law major.  When they found Elle, she was on her knees, staring at a pool of her own vomit.  Kara was gone, having leapt through the window, but before she left, she whispered in Elle's ear.

"I'll finish you all before you leave this dorm."

Abigail admitted that she felt a spirit "flee" through her just a moment earlier.  Knowing that there were other students in the dorm, Ezra quickly opened another door and found a dead student, her throat ripped out.  The party lost track of Holly during this scene.  She was there in the room with the players briefly, scolding them for leaving the table, but she'd eventually trip and break one of the nearby outlets, shutting off all of the power to the building.

This wasn't really the GM forcing the scene, rather I was reacting to Jeremy rolling a "1" on both his skill die and wild die.

Obviously the study group was short on weapons, although Chaz was serious about using the wrench from his toolkit to do some damage.  They used their smart phones to call campus security, who arrived and secured the building.  Strangely, the dead girl in the dorm disappeared, and the cops were not too concerned.  Perhaps this was the work of Holly!

For a few minutes the party used social media to banter back and forth with Kara, tossing threats, and nasty comments.  By this point in the evening, everyone was getting a little punchy, myself included.  For two hours there was quite a bit of off-topic, yet college-related game chat, and I realized we weren't going to get to a full conclusion.  So I decided that Kara Tate would make for an interesting recurring villain, and I moved the players along to their exams.


(GM's Note:  If you happen to be one of the five players at this table you may notice that several very funny… yet completely inappropriate for most readers… quotes have been left out from this list.  Sorry.  There is certainly something about playing a game as college students that gives this group a case of the potty mouth.)

"We need an oscillating laptop stand."  - Jen wishing that poor Emily was able to see the entire table and not just the GM.  Unfortunately Emily has to play via Skype.

"I heard she supports John Fetterman too… what a babe!" - Ethan got pretty excited about Holly being a Democrat.

"Intro to Your Mom!" - Emily's suggestion for the class the party is taking.

"I feel like we need a 'bwaah!'" - Jen, after learning about the Adventures in the East Mark twist.

"Can I use a chemistry set to tell if this is human blood?" - Andy must have grown up with some incredible chemistry sets.

"Geez Holly, you're the worst!" - Elle must have spent time at Greendale Community College.