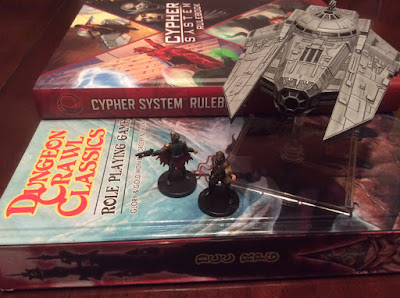 A Time to Celebrate

Like many of you I've been counting the days since that very first teaser hit YouTube.  Finn on the sands of a faraway world.  BB-8 rolling at top speed.  The first glimpse of Kylo Ren's lightsaber burning bright.  The Falcon in flight dueling with TIE Fighters.  I was thrilled yet anxious.  Would this be the amazing film I craved, or Star Wars in name only?  Admittedly I had my doubts, and reserved judgement until I could see more.

Of course, when the second teaser dropped, and I saw Han and Chewie, I was fighting back tears of joy.

Since the April release of the second trailer, I've gone into Star Wars overdrive.  We celebrated a magnificent Star Wars day with friends and family.  I purchased way too many Star Wars X-Wing Miniatures much to my wife's delight.  I picked up Fantasy Flight Games Star Wars: Edge of the Empire Role-Playing Game and read that entire book cover to cover (of course it took me half the year to do so.)  I even had the chance to play a few games of Edge of the Empire and Age of Rebellion, enjoying myself thoroughly.

So when Thanksgiving was over, and I started to seriously count the days to the release of Star Wars: The Force Awakens, I knew that I needed to celebrate with some kind of role-playing extravaganza.  But my first instinct wasn't to open my new RPG books.  I'm already  in the middle of enjoying several "non-Star Wars native" game systems right now.

What if I tried running Star Wars in a totally unexpected system?

To Choose the Dark Side… or the Light

While on Facebook last week I saw a question pop up asking about people's favorite Star Wars RPG systems.  Obviously whenever something like this gets posted several games come to everyones' minds, and their fans race to throw in their support:

I realized that most folks posting on this question would offer up one of these games, so I decided to go outside the box and suggest something completely different:  running a Stormtrooper-themed game using Dungeon Crawl Classics.

Speaking from my experiences in the Spring, I had an absolute blast running players through the Stormtrooper-themed 0-level funnels that I hastily threw together.  The games were fast, campy, and a lot of fun.  Now, I'm not going to sit here and try to tell you that DCCRPG is the "perfect system" for running Star Wars themed adventures.  But I can say that I enjoyed running those few Stormtrooper adventures more than all my time running Saga Edition combined.

In a similar way, I really enjoyed running the Star Wars themed sessions of The Strange  earlier this year.  Turning Knights of the Old Republic into a recursion, I had the chance to come up with some quick house rules, select relevant foci for character generation, and experience the Star Wars universe with the Cypher System's nimble game mechanics.  This was all pre-Gen Con and the Cypher System Rulebook had not been released yet.  My only way of running a complete Cypher Star Wars game back then would have been to hack Numenera and The Strange.  Thankfully we live in a post-Cypher System Rulebook release world now…

So I want to do some Star Wars RPG'ing, and when it came time to pick the system I was torn.  While I enjoyed the West End Games d6 System, I gave away almost all of my books several years ago when the D20 System came out.  Completing the cycle, I ditched many of my D20 books when Saga Edition turned up on the shelves.  I didn't particularly enjoy running the Saga Edition, and finding the books is a pain, so that game was out of the question.  Finally, I was left with running Edge of the Empire, which I enjoyed, and want to play more, but I didn't feel that I had enough mastery of the system to do something "special" for my celebration.

I wanted to experience Star Wars a bit closer to home.

So I chose both the Cypher System and Dungeon Crawl Classics.

This time last year I was preparing for Quattro con Carnage, an exploration of old-school fantasy role-playing across four different RPG systems.  For this Star Wars experiment, which I'm titling Villainous Scum, I'll be doing something similar.  Over the next several weeks I'm going to craft a pair of Star Wars adventures featuring a band of bounty hunters in service to the Empire.  As I develop the characters, adjustments to game mechanics, and adventure details, I will share the information right here on my blog for anyone who wants to follow along.

The cast for Star Wars: Villainous Scum is currently as follows:

Here's what I can share from my plan right now:

For a special "bonus feature", I'll be developing a pair of Star Wars X-Wing Miniatures scenarios for Commander Dragoon's VT-49 Decimator, The Last Dance.  These scenarios will play out between my daughter Evie and myself, and will both be posted as separate blog entries.

All in all, I'm looking at about fourteen separate Villainous Scum posts between now and early January.

As always, I would greatly appreciate any and all feedback regarding this little experiment.  For those Edge of the Empire devotees, I'm betting that Andy will get his way and I'll be giving in to his demands by the end of the month.  But for now, I'm really excited to see where this goes.

May the Force be with me! 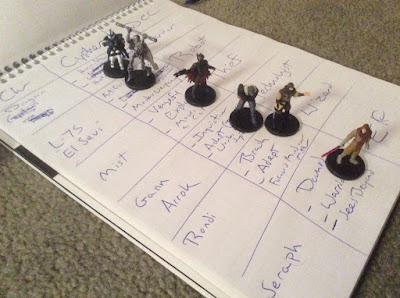