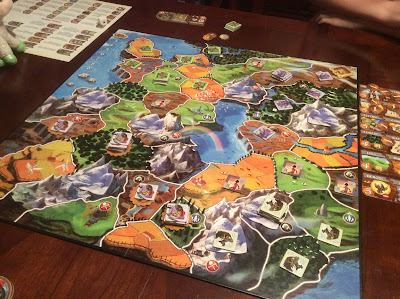 Now that I'm a boring, grown-up gamer with a job and a family and responsibilities, finding time to create campaign settings from scratch can be difficult.  Sure, I can throw together a small village and surrounding region and let it grow organically over time.  But I'm talking about massive, globe-spanning settings where every piece of the map is detailed and the history can be traced back for thousands of years.

The days of cooking up my own Athas or Krynn are far behind me.

I have no problem throwing together the maps for these kinds of campaigns.  I can knock out a pretty decent map over the course of a week, full of kingdoms, natural wonders, and dark secrets.  Tossing in a village, town, or even a city isn't usually very hard for me either.  There are plenty of awesome city maps to find online.  All one has to do is Google "fantasy city map."  No, the challenge I have when I'm building my own setting is coming up with a somewhat coherent, marginally logical world history.

Personally, I have a hard time immersing myself in my own campaign settings unless I have some kind of idea about how the world came to be.  I want to know about the ancient kingdoms, the conquerors, and the powerful entities that remain hidden in ancient crypts.  This is probably why I'm such a fan of published settings; there is so much for me to discover as a game master, that I feel like one of the players during the game.  All of the hard work has already been done for me, and all I need to do is sit back and read.  When I try to write these histories myself I usually get slammed by writers block.

But I believe I may have found a solution... 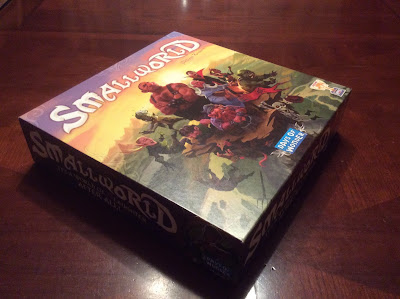 It's a Small World After All

A few years ago my family discovered Days of Wonder's legendary game, Small World.  We first learned of this terrific board game of fantasy conquest by watching Tabletop on YouTube, and it didn't take long before we had our own copy in our hands.  Small World is both easy to learn as well as fast to play, as opposed to other conquest games.  I've had games of Risk last all night, and I can't ever remember finishing a full game of Axis and Allies.  Small World can take anywhere from 45 minutes to a full hour-and-a-half.

But those are some action packed minutes!

During a recent game, I watched as each turn played out and started talking about the world's "history" to my two other players.  Evie has been playing Small World with me since we first purchased the game, but it was Cooper's first game.  I soon learned that Cooper was more interested in the fun stories that came out of each turn rather than how he was doing with respect to points.  So I started thinking...

... could the legends and histories created in Small World flavor an role-playing game campaign setting?

It was worth a try!

I set up a four player, nine turn game with the intention of capturing information from each turn.  I took some pictures and some notes from player interaction, and from the game I chronicled the world's history.  The goal would be to have everything from the Small World game find its way into the mini-campaign setting's history.

Now I'm not going to bore you with a long, drawn-out history of another game-master's setting.  Rather, I wanted to share how quickly and easily a GM could create something for their players on-the-fly.  Perhaps this is an exercise you could do with your entire gaming group, with everyone showing up for a big Small World game several weeks before the start of a glorious campaign.

So open up your fantasy history textbooks, and read along as we learn the secrets of this dark and war-torn land. 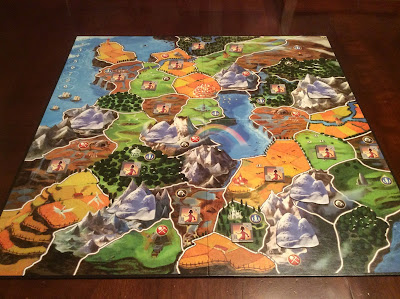 Let us begin with our world - Norwinia.  Norwinia's tale begins with the Lost Tribes.  These small villages of neolithic humanoids dotted the landscape of Norwinia from the northernmost forests to the southern mountain valleys.  For millenia the Lost Tribes existed in peace and harmony...

... and then the invaders came!

The Mage King was the first to arrive in Norwinia, leading his army of wizards and warlocks from the desolate wastes into the northeastern frontiers.  These wizards were fond of grand castles and stout keeps, and used dark and forbidden magicks to create these structures wherever they went.

Around the same time, subterranean tribes of Amazons rose from the ground and started to conquer the northwestern coastlands of Norwinia.  They laid waste to the poor Lost Tribes in their path.

Perhaps the wars of the living made the souls of the dead jealous, for the southern reaches of Norwinia were soon infested with the walking dead.  Skeletal, bivouacking monstrosities and alchemically infused ghouls erupted from their graves by the thousands. 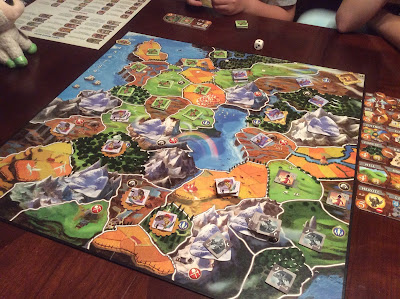 This first age of Norwinia would be defined by the Mage Kingdom and Amazonia. The former controlled enchanted lands imbued with arcane power, and were content with their conquests. The Amazons had their eyes set on more land, and chose to stretch out across the coast. 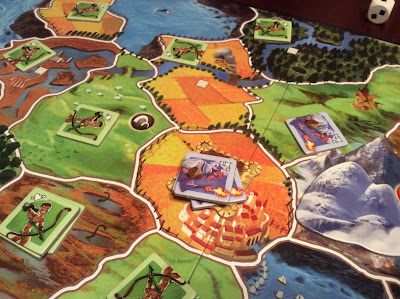 It should come as no surprise that eventually the Mage Kingdom and Amazonia would go to war. There was fertile land on the eastern frontier of Amazonia, perfect for the Mage Kingdom's new capital. Quickly a massive force of wizard-soldiers took these lands, and almost as quickly the Mage King constructed a grand fortification at the center of a cosmopolitan wonder...

... it came to be called Carinaria! 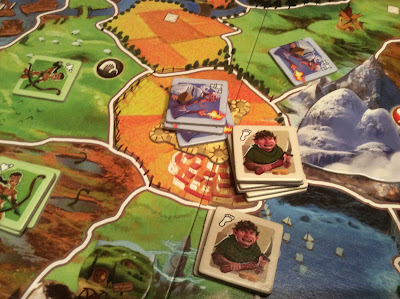 But while the Mage Kingdom created Carinaria, they would not enjoy their prize for long. For a mysterious race of people sought to come forth into the lands of Norwinia from their small nooks below the earth.

The Spirit Halflings, once seen by the Amazons as just a nuisance along the central sea, arrived on the scene in great numbers. Tens of thousands of sling-bearing, wardog riding little-folk began their own series of conquests... starting with Carinaria! 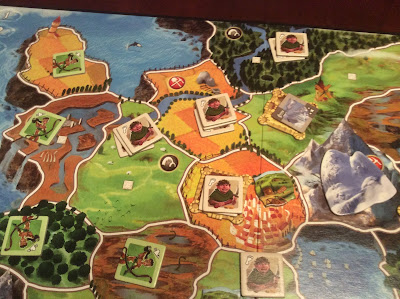 From Carinaria to Central Amazonia, the dog-riders crushed all beneath their mounts' paws.  Just before the end of their respective monarchies, the Mage King and the Queen of Amazonia forged a short-lived alliance.  But both monarchs would die of old age long before the miniature menace would fade into obscurity. 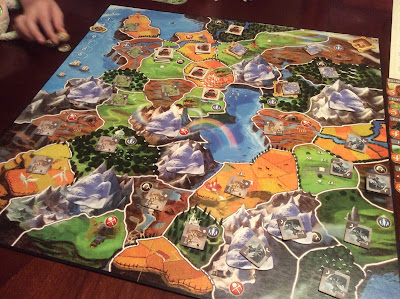 The Age of the Halfling was at hand!

For several centuries the little-folk ruled their territory justly and fairly.  Free trade continued in the lands of the conquered, and halfling warriors lead excursions into the undead-infested lands to the south.  But hungry eyes were starting to gaze upon Norwinia's wealth. 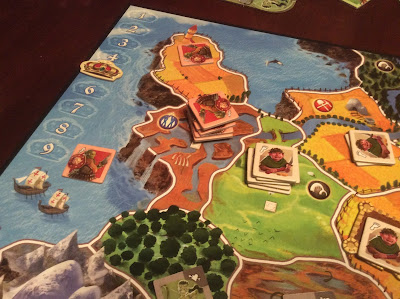 The orcs would invade Old Amazonia from the Great Western Sea.  Their slave-driven galleys carrying thousands of bloodthirsty brutes. 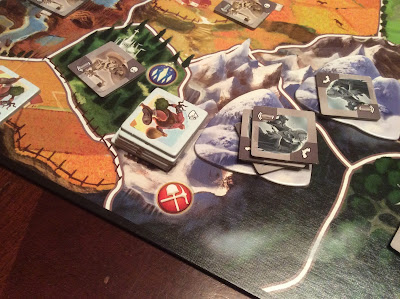 The mountain-born giants would pillage starting in the south, their warband leader finding the ancient, decrepit skeletons and ghouls to be no match. 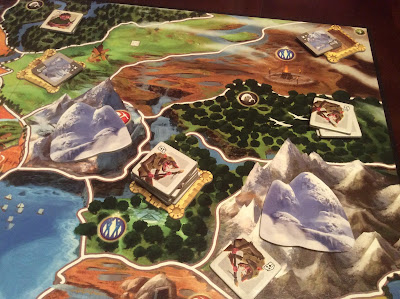 Finally, from the east, the forest native Ratmen set out to capture the grand castles of the wizards.  While the orcs to the west and giants to the south were fierce raiders, bent on conquest at all costs, the Ratmen were shrewd diplomats.  In exchange for the lands of the old Mage Kingdom, the Ratmen would gain the assistance of some of the remaining wizards so that they war against the undead in the south. 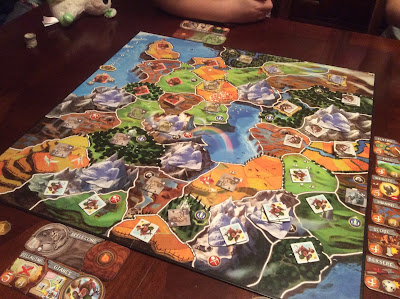 By the time the halflings went into a full decline, the Ratmen were warring not only with the skeletons and ghouls, but also with the pillaging giants who now possessed all of the southern mountain regions. 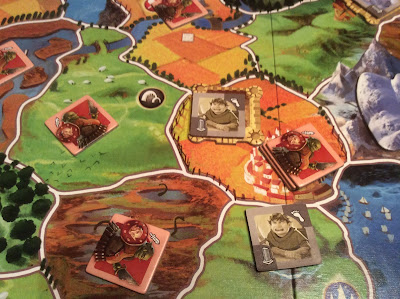 Eventually the Orcs came for Carinaria and all its riches.  The halflings, no longer able to protect the city from the backs of their mighty wardog mounts, retreated into the hills and forests. 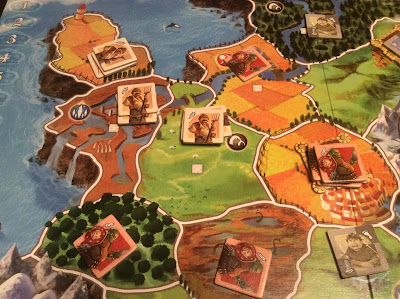 Just as quickly as the Orcs had taken control over Amazonia, the humans of faraway Shriekland plunged into lands long under the horde's control.  Perhaps it was the lure of lush farmland, or of great Carinara itself, but one thing is for certain... 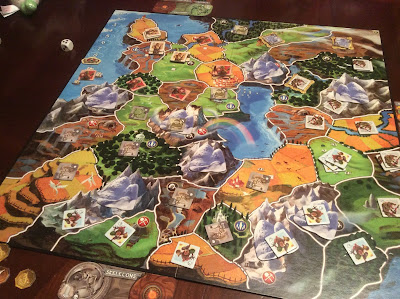 This is what we came up with following a ninety minute game and about a half-hour of conversation as a family.  A quick snapshot of the map, and perhaps some photoshop, and we could have a source for a great campaign.  In just a few minutes I thought up a few fun plot-hooks:
These are just a few ideas that popped into my head after a quick game.  Although I'm not starting a new campaign at the moment, I'm certainly placing a few of these ideas in my memory for future use.

If you've ever designed a world using a conquest style board game, I'd love to hear your stories!  Did this kind of world-building help generate player "buy-in?"  What other tools have you used to allow players to aid in crafting a new setting?

Oh, and in case you were wondering, my five-year old son won the game with his Bivouacking Skeletons and Pillaging Giants. 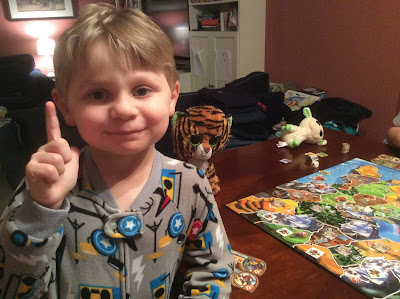