Gobbler Road: Beyond Gravy Dome - A Thanksgiving Game of The Strange 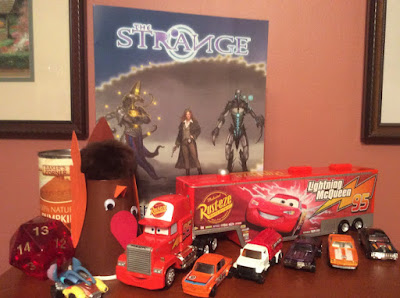 Last year we embraced a new tradition in our family: Thanksgaming!  After hearing of other friends and family participating in similar engagements, I jumped into the celebration head first.  We played Dungeons & Dragons on Thanksgiving Eve, Gloom'd it up on Black Friday, and on Saturday invited the hardcore RPG aficionados of the family to join in a special game of The Strange.  With its Turkey-theming, and over-the-top plot, our adventure, "All Gobbled Up," was a memorable experience…

… something worth repeating this year!

Several weeks ago I started making plans for another Turkey-themed, Thanksgiving season game of The Strange.  For a second year in a row we would be in Smyrna, Delaware to celebrate the holiday with my parents.  My cousin Rachel planned to join us Saturday for an evening of The Strange.  The books were packed, the dice organized, and the adventure written.  We were all set to travel to Delaware Wednesday…

… and then Evie barfed!

Stricken with a stomach virus, Evie wasn't up for traveling, and we didn't want to expose the rest of the family to an illness over the holidays.  So we cancelled our plans, and stayed home.  For Thanksgiving dinner I cooked a big batch of vegetable noodle soup and roasted tofu strips, while Jen made a batch of biscuits.

We entertained ourselves by kicking off an epic, four-player game of Diablo 3 on the Xbox 360 and made plans for our next holiday trip to Delaware.

Oh, and we still played The Strange!

We were not about to let a little stomach bug stop our role-playing!  Since we weren't going to have any other family members come to the game, it would be no problem running the Thanksgiving game on the holiday itself.  So when everyone else we knew was enjoying pie and ice-cream, we set up the table for an awesome game night.  Even little Evie dragged herself to the table to roll some dice!


I knew that it would be challenging to make this year's Thanksgiving-themed adventure more over-the-top than last year's fun romp.  I enjoyed making turkeys the antagonists, and wanted to do the same this time around.  But I also wanted an excuse to create a new recursion for The Strange.  I've been playing a lot of Fallout 3 lately (yes, I'm a few years behind in my Fallout), and earlier this year I became obsessed with Mad Max: Fury Road.

No one knows how or why the recursion of Gobbler Road came to form.  Some say the savage fury of Americans devouring millions of turkeys on Thanksgiving created the initial seed for this recursion.  Others, especially the official chef of the Estate, Alton Brown (yes, "that" Alton Brown from Good Eats), believe that some of the sentient turkeys that have come to Earth from other recursions have had their own legends and tales become reality.

Whatever the reason, whatever the cause, eventually Gobbler Road came to exist

Gobbler Road Attributes
Gobbler Road consists of the long, never-ending stretch of dilapidated highway that bears the recursions name, as well as a few tiny communities of feral humans.  At the center of the recursion is Baster Town.  Ruled by the great, Turkey overlord Immortan Tom, and protected by his powerful and fanatic soldiers, the Warbirds, Baster Town is a nightmarish construction of iron and bone… human bone.

Immortan Tom has declared that there shall be an annual holiday: the Thanksculling.  Each year, he sends out his Warbirds into the wastes of Gobbler Road to bring back humans for the harvest.  The strange quick of Gobbler road is that every day is Thanksculling.

Now I apologize for the hastily hand-drawn map above, but if you take a look there are some unique structures in Baster Town. 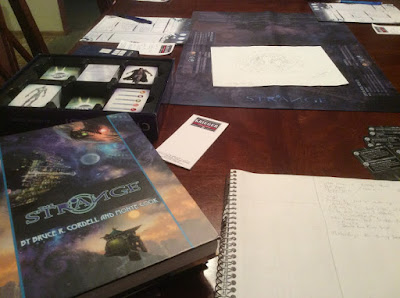 Four agents of the Estate were perched on a large dusty hill overlooking the sun-scorched, sheet-metal walled nightmare known to all in Gobbler Road as Baster Town.  Three of the agents, Arianna, Crystal, and Jackie, had worked together on several missions over the past twelve months.  The fourth agent, Agent P., was a sentient spy-platypus from the Tri-State Area recursion.  The team was on a mission of the utmost importance for the Estate... a rescue mission.

Several days earlier, Estate Chef and Chief Culinary Agent Alton Brown went missing.  After much investigation, it was revealed that members of the Beak Mafia from Crow Hollow had captured Alton Brown, as well as many other prominent American chefs.  The Beak Mafia quickly handed these chefs over to the ruthless overlord of a post-apocalyptic wasteland: Immortan Tom.  It was Immortan Tom's intention to roast the chefs in the Gravy Dome for the annual Thanksculling celebration.  The Estate Agents would have to work quickly…

… because on Gobbler Road, every night is Thanksculling!

Jackie Dingo carefully led her team into a nearby tent just outside of Baster Town.  The residents of the tent were missing, but they had left some soup on a stove.  One look at the soup and Crystal nearly screamed.  It took Agent P.'s metal hand covering up the Paradox's mouth for the team's cover to remain secure.  Crystal commanded her new robot attendant, Axel, to push the soup pot to the ground.  The contents were horrifying: human hands.

These turkeys had to be stopped!

Arianna scouted the perimeter of Baster Town's wall and came up with several possible ways to enter the fortress.  The team could try to sneak through the front gate or over the wall.   A third, somewhat gross option would be to climb down into the moat surrounding Baster Town and then enter the sewers.

The team chose the sewers.  Arianna used her Lift Cypher to carefully assist each agent into the water, and then they all quietly entered the tube.  The liquid leaking from the sewers was a mix of water, sewage, hot butter, and sage gravy.  Perhaps it was their collective disgust, but soon the team was hopelessly lost in the sewers.  Unsure of which path to take next, Agent P. decided to climb up the next available ladder.

Using his innate danger sense, Agent P. carefully lifted the grate at the top of the ladder and took a look around.  Two Warbirds patrolled the central Baster Town yard, and the pen keeping all the humans was only a couple dozen yards away.  Agent P. quietly slipped from the grate and then used his toolbox to unlock the cage.  One by one, the other agents slipped into the pen holding the humans.

The human chefs inside were incredibly thankful to see the Estate Agents.  Agent Alton Brown gave the team a quick run-down of the goings-on inside Baster Town, and noted that the time for Thanksculling was soon approaching.  The other chefs and cooks were eager to leave Gobbler Road, but it would be difficult sneaking everyone out of the town through the sewers.  Needless to say, once they would escape through the sewers, the humans could be run down by the Warbird cars and trucks.

Jackie Dingo took a look at the parking lot adjacent to the Wing Shop and saw the massive War Rig ready to go. 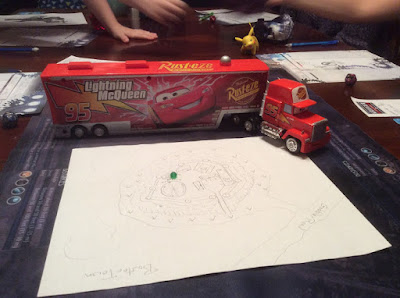 Jackie Dingo turned to the chefs.

"Do any of you know how to hot-wire a big rig?" the skeptical spinner inquired.

One cook stepped forward.  He was a pudgy man, with frosted hair, wearing a stained hawaiian shirt.

"We need to hightail it out of here and head straight to Flavortown!" the man announced proudly.

So Agent Dingo, Agent P., and Guy Fieri snuck past the two Warbird guards and got into the War Rig.  True to his word Guy Fieri was able to hot-wire the truck, but in his excitement, the Food Network host started hootin'.  He then sounded the truck's horn, alerting everyone in Baster Town that something was amiss.

Jackie Dingo punched Guy in the mouth and dragged him out of the drivers' seat.  "What the heck, Triple D.?"

Improvising, Jackie put the War Rig in reverse and ordered Agent P. to climb on top of the truck.  She backed over one of the nearby barracks, causing a half-dozen Warbirds to explode in giant bursts of blood and feathers.  The two Warbird guards jumped out of the way of the truck, but soon found themselves burning courtesy of one of Agent P.'s grenades.

While roasting, the Warbirds were still standing between the War Rig and the escaped chefs.  Arianna charged forward with her sledgehammer, striking one in the head.  The blow should've killed the Warbird, but instead it grabbed a container of aerosol cranberry sauce.  Spraying its beak, the Warbird screamed out.

The dying Warbird charged with his spear, but Arianna tumbled out of the way.  The remaining Warbird started charging towards the graceful vector, but Crystal called upon the power of the Strange and used her Exception power to lob a metal fist at the creature, knocking it unconscious.  Agent P. ordered the chefs into the War Rig and Jackie Dingo drove the massive vehicle out onto Gobbler Road. 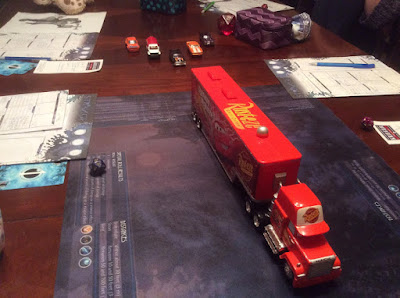 Only minutes after leaving Baster Town, Jackie Dingo realized the team wasn't out of the woods yet.  Five hotrods trailed the War Rig, each crewed by raving Warbirds.  Immortan Tom himself had come out to play, in an ominous black car covered in spikes resembling fork tongs.

Agent P. grabbed Crystal Cosmo and headed for the back of the War Rig.  At the back of the truck was a large pod full of liquid hot butter.  Perhaps they could dump the pod, and grease some of the vehicles. 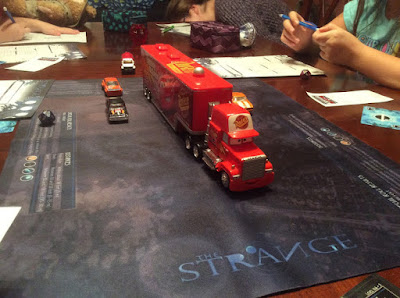 Immortan Tom and two of his vehicles drove up along side the War Rig.  They were preparing to take out the tires!  But before they could act, Agent P. and Crystal unlocked the butter pod.  The hot butter exploded onto two of the vehicles, causing them to crash and explode!

With two cars remaining, Agent P. climbed to the top of the War Rig and let out a terrible war cry in the hopes that it would intimidate the remaining War Birds.

"I will grab you and I will throw you in the oven!" Agent P. screamed.

The Warbirds took this threat seriously, and they peeled off.  The road was finally clear, and it was smooth driving…

Looking Forward to Next Year

As I glanced through social media last night I saw that we weren't alone in our gaming exploits.  Far from it!  I hope that all of you had a great gaming evening, whether you were celebrating Thanksgiving in the U.S. or if you were just having a good dinner and gaming in other parts of the world.

As Thanksgaming comes to a close, I can set my eyes on something far, far more twisted and sinister… 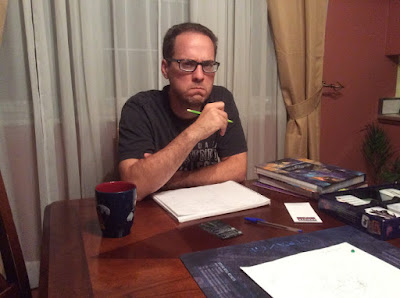