Tabletop Gaming in the Magic Kingdom 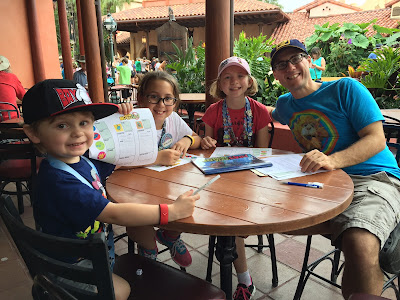 Our family is obsessed with all things Disney.

The characters, the television shows, the movies, the games, the art, no matter how much "ear-marked" goodness we consume we still crave more!  We are also incredibly fortunate in that we can make the trip down to Walt Disney World every eighteen months or so.  My wife Jennifer and I first vacationed in Disney World as a family in 2007, and have watched our three children grow in the Disney parks.  Note my reluctance to use the exact phrase "grow up", as it is our hope that our children never lose that delightful spark of childlike imagination.

While a vacation in Disney World is exciting and wonderful, it is also physically demanding.  If you've never been there, imagine spending six to seven days in four theme parks, surrounded by thousands of fellow vacationing parents and children, eating way too much food, while walking seven to ten miles each day.

Yes, for us, this is paradise!

Over the years we've created many unique memories in the parks, so for 2015 we wanted to take our visit to the next level…

… and yes, that is an intentional gaming reference!

As well as being extreme Disney-fanatics, we are also a family of devoted and intense gamers.  Whenever we travel, our family packs an extensive collection of handheld devices (tablets, Nintendo DS's), card games, board games, dice, and tabletop roleplaying game books.  You just never know when a good game will break out!

In 2014 we brought our Numenera core book to Orlando and played two tabletop role-playing sessions in Disney's Art of Animation Resort.  One of these games took place in our hotel room while the other smack dab in the middle of the resort food court.  Following a very successful game, I knew that the only way to "up the ante" in 2015 would be to run a tabletop RPG in an actual Disney park.

More on that later…

Knowing that we had nothing planned for our first night in Disney World, I wanted to prepare our family for a week of awesomeness by gaming in public at our resort.  This year we stayed at Disney's Saratoga Springs Resort and Spa, a peaceful property that emulates the feel of an upstate New York country retreat.

After arriving at our hotel, my daughters and I scouted out potential places to sit down and play a tabletop game.  There were a few tables in the main lobby, as well as at Artist's Palate, the resort's casual dining area.  But neither of these felt right.

We ended up choosing a very comfortable table right outside of a small bar attached to the resort's table service restaurant.  The room featured a pool table and a TV, and several other guests were watching some kind of sportsball.

I don't know which one… I don't do sports'ing.

After unpacking, we went through the games we brought to find just the right one to play.  While Love Letter and Fairy Tale Gloom would seem appropriate given the magical fantasy world of Disney, my daughter Evie wanted to explore a different kind of Disney fantasy…

… the kind that only exists in a galaxy far, far away! 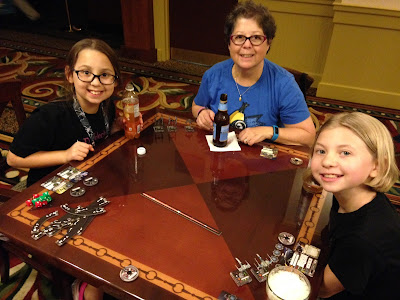 Along with our card games, we had packed the new Fantasy Flight Games X-Wing Miniatures Game starter set, featuring ships from The Force Awakens.  Before leaving Pittsburgh I also purchased a pair of new fighters, the Z-95 Headhunter and the Kirhaxz Fighter just for this occasion. 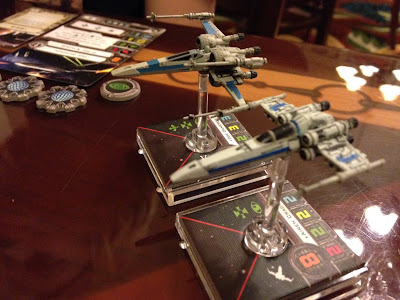 Carrie and I chose the Resistance fighters (X-Wing and Z-95) while Evie and my mom went with the First Order TIE's (bolstered by the Kihraxz).  This would be my mom's very first time playing X-Wing, and while it took her a few turns to get the hang of the game, eventually she became a sinister adherent of the Dark Side! 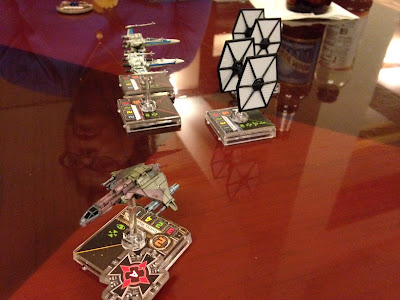 We set the victory conditions as follows:

Perhaps I was setting Carrie and I up for disaster with these rules!  In the end, it wasn't Evie that scored the killing blow against my Z-95 Headhunter, rather it was my mom and her Kihraxz!  After almost losing her fighter to the combined fire of both Resistance fighters, my mom took her Kihraxz far to the edge of the game table, circling back while we were tangled up with Evie's TIE's.  The next round it was all over, three hits against my poor Z-95's already whittled hull.

I can't wait for the chance at revenge next time we are at my parents house in Delaware! 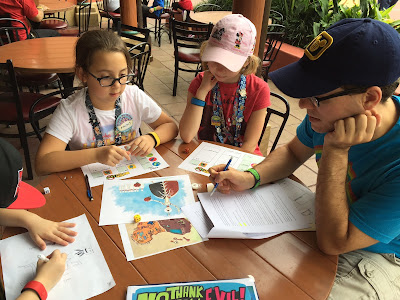 Running a No Thank You, Evil Adventure in Adventureland

Back in September I posted Disney World: Strange or Weird, highlighting my own internal struggle on which tabletop RPG to run while at Disney.  By the end of the post I was leaning towards The Strange.  Here's a sample from my initial notes:

Great idea, I thought.  Neat concept, cool plot possibilities… but I shelved it for a future adventure.

Several people, notably +Henry de Veuve on G+ and my kids at home, mentioned how No Thank You, Evil would be a perfect fit for "Disney Con 2015."  I agreed. 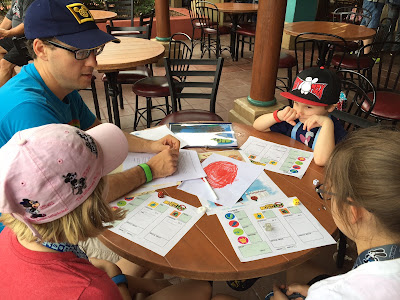 For those of you who may have missed out on the Kickstarter, No Thank You, Evil is a family-friendly role-playing game by Shanna Germain and Monte Cook, currently under development over at Monte Cook Games.  No Thank You, Evil allows children to enter the world of Storia and take part in all manners of fantastic adventures, many of which could come right out of their favorite storybooks.

Although No Thank You, Evil has yet to be released, my family and I had the opportunity to take part in the playtest.  So I reached out to the folks over at Monte Cook Games and they gave me permission to run a very special session of No Thank You, Evil using the playtest materials while on our Disney vacation! 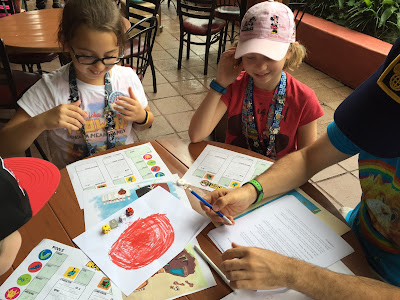 On the third day of our Walt Disney World excursion we packed our already stuffed bag with the playtest rules, character sheets, art from the Kickstarter page, dice, and pencils.  We were bound for the Magic Kingdom, and in search of the perfect gaming table for the ultimate fantasy #GetOutAndGame experience!  After a full morning of rides and shows we stumbled across a terrific selection of tables right across from the Pirates of the Caribbean attraction!

We ordered our lunch from Pecos Bill's in Frontierland, and set up our game while we finished eating. 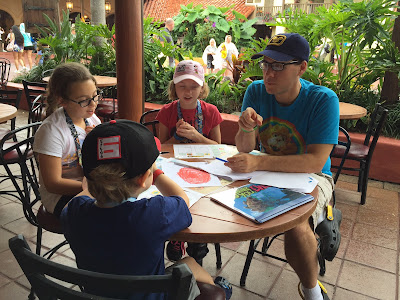 I can't share any details from our game session at this time, but I can say that we were able to play a full and enjoyable adventure while in the park.  We were scheduled to spend nearly fifteen hours in the Magic Kingdom that Tuesday, since we had tickets for Mickey's Not So Scary Halloween party.  Taking a few hours in the middle of the day to relax, eat lunch, and play a really fun and family friendly adventure was a needed recharge!

If you want to find out more about No Thank You, Evil, definitely check out MCG's website dedicated to the upcoming game! 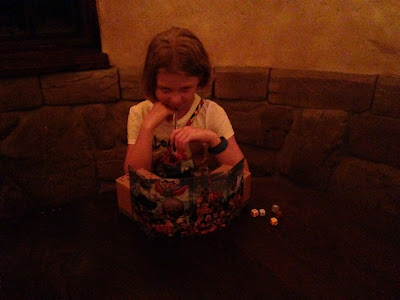 Sadly, like all good things, this visit to Disney World had to come to an end, but plans for the next "Disney Con" were already underway before we left the parks.  On Friday night my daughter Carrie and I discovered the perfect game table for old-school, fantasy RPG'ing…

… right in the back of New Fantasyland! 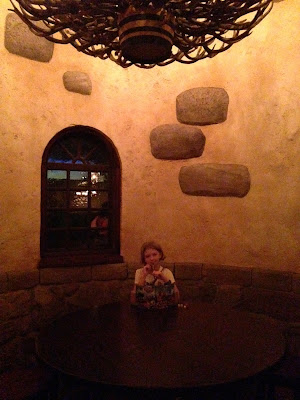 At Gaston's, a cozy quick service restaurant based on the dastardly villain from Beauty and the Beast, we came across a round table tucked away in the corner.  Located beneath a large chandelier made out of fake antlers, this table could host a myriad of adventures…

… oh yes, there will be a Dungeon Crawl Classics RPG encounter at the next Disney Con… and it will be in New Fantasyland! 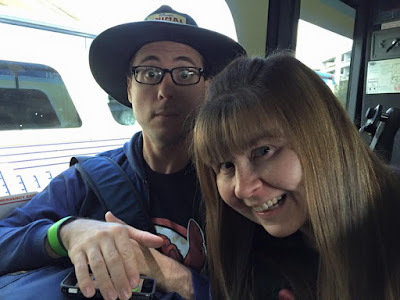 Before I sign off, I need to thank my amazing wife (and professional travel agent specializing in Disney-awesomeness) +Jennifer Walls for making this vacation possible.  She's the one that develops all our itineraries and makes our reservations way ahead of time.  So when I tell her "hey, I want to squeeze in some gaming on Tuesday", she goes out of her way to make it possible.

I love you Jenny!   Thanks for another great trip :)