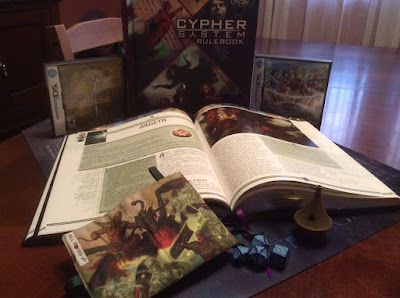 Far too much time passed since my weekly Cypher System gaming group last gathered on Google Hangouts to sling cyphers and spend effort.  I've been very busy at work, and running a two or three hour RPG session after a ten or eleven hour day can be rough.  But I've missed playing with this group.

I've missed it a lot!

So I dedicated myself to running a series of adventures with our Cypher System Fantasy - Ardeyn: Land of the Curse characters, aiming for weekly/bi-weekly two-and-a-half hour sessions.  I would just need to find an adventure to play.  I wouldn't have time to write a homebrew adventure, not with all my Cypher Star Wars'ing going on right now.  I also didn't feel like doing an adventure conversion from Dungeons & Dragons to the Cypher System.

What I really wanted seemed impossible: a fantasy adventure set in Ardeyn but outside of The Strange campaign setting.

Apparently +Bruce R Cordell read my mind, because when I flipped open my brand new copy of Strange Revelations, I discovered "Starfall in Ardeyn!"

This adventure had everything I wanted.  Just a great quest taking place right in the middle of Ardeyn without any translations to other recursions.  This was PERFECT for what I wanted to do with our Cypher System Fantasy campaign!


Strange Revelations is designed to allow Cypher System game masters the opportunity to prepare a published module in very little time.  Most of these I could prepare in ten to twenty minutes.  But without any time constraints, I took my time with "Starfall in Ardeyn."  The first four pages of the adventure feature the core of the plot and story, but the last two pages give terrific suggestions for running the adventure over the course of several sessions in a campaign.

My goal was to turn "Starfall in Ardeyn" into a three session adventure-arc.

I also decided to throw in a few tweaks:


I'm so happy that we had the opportunity to get back to the table last night!  Sitting down with Marc, Andy, Frank, Craig, and Jeremy felt like being "home" again…

… and I was certainly homesick for Ardeyn.

Episode 5: Starfall in Ardeyn, Part One

Interested in riches and glory beneath the ancient city of Shalmarn, the party departed  the Citadel Hazurrium and headed east towards the Borderlands.  Only a few days into their journey they arrived in the small river town of Elefar, discovering that the entire population was in the midst of a great celebration: the Seven Moons Jubilee.  Tired from travel, the adventurers decided to find the local inn and spend the night in a warm bed.

As the characters explored the town, they noticed a scuffle down one of the alleys.  Four street toughs had cornered a bald man carrying a small barrel of ale.  Shenuesh led the team towards the commotion, intent on either stopping the violence or adding to the bloodshed… either/or.  The man, Pitricus Sederaste, was the owner of Elefar's most popular Inn and Tavern: the Thrice Charmed Demon.  Apparently the thugs had lost quite a lot of money in one of the tavern's games of chance, and hoped that Pitricus' small barrel of brew could net them some coin.

The party had no problem resorting to their weapons, but Pitricus whispered to Shenuesh that the leader of the thugs was Elder Meena's son.  So began a war of intimidation.  Zamani began by shouting some harsh  and pointy words.  Verenn tried to show his spectral face… only to have some rogue dust cover his ectoplasmic visage giving him the appearance of just being a pasty old-dude.

"Run," Shenuesh whispered to the man.  The elder's son complied.

Grateful for his rescue, Pitricus invited the party back to his tavern for free drinks and a couple rooms for the night.  As they walked, however, a brilliant light crossed the sky.

It was a falling star!  The fireball burned through the air, and fell on the western slopes of the nearby mountains.  Perhaps it was an omen of good fortune.

Pitricus guided his new friends to the Thrice Charmed Demon.  A dark but cozy, busy but impossibly clean establishment, Pitricus' tavern featured a gorgeous bar, a full kitchen, and several rooms for travelers.  Two of the walls were adorned with ornate weapons, while the wall behind the bar featured the worn and used weapons of former adventurers.

The party sat at a comfortable table and enjoyed several pitchers of fine ale.  While imbibing the flavorful drinks, Sister Sariety noticed a strange game taking place nearby.  Two farmers nervously stared each other down, laying down coins while calling out parts of their body.

The game was called "Bones", and the rules were simple:

Start with the toe, end with the skull.

Two players would kneel face to face next to a rack of hammers, mallets, planks of wood, and crowbars.  Each would take turns calling out a bone in their body that they would be willing to break, placing several coins into the pile.  One by one, more important bones would be called out.  Eventually one of the players would call out a bone that the other would not be willing to break, causing their opponent to forfeit.

That's when the winner would have their own declared bone broken, winning the pot.

It was a sick game, and Sister Sariety wanted Verenn to play!  She tried to figure out a way to allow her spectral associate to "fake" a bone break.  But when she learned that the two players were playing for their summer's earnings at their respective farms, she changed her mind.  Affter one of the players had their shoulder broken upon "winning" Bones, the Sister healed the man's wound.

"Arcana!" everyone in the tavern started to shout.  Apparently an unwritten rule of Bones was that no magic could be used in the game.  Being the fast talker that she was, however, Sister Sariety talked her way out of any trouble through her new friend Pitricus Sederaste.  Pitricus suggested that the party head outside and enjoy the wresting matches.

Obviously the chance to wrestle during the Seven Moons Jubilee piqued Zamani's interest.  The ugallu explorer signed up to fight a local favorite named Danyal.  Sister Sariety signed on to be Zamani's trainer while Shenuesh accidentally found himself assigned to the role of "oiler."  While the Sister called upon the Maker to give Zamani a power inspiration of "aggression" in battle, Shenuesh started oiling the ugallu's fur.

Unbeknownst to Shenuesh, the oil was made with Silversage, an herb that had little effect on normal humans, but made lycanthropes drunk.  The very pleasant Shenuesh then tried to "sculpt flesh" on Zamani, only to fuse his own flesh to his friend's and then pass out.  So Zamani would have to battle Danyal with a passed out lycanthrope attached to his chest…

… and the crowd loved it!

The wrestling match was heated for several minutes.  Zamani punched at Danyal, nearly knocking him out of the ring, only to be pushed back by the local powerhouse.  But after a few throws, Shenuesh got knocked free from the ugallu's body.  Without a lycanthrope draped across his furry chest, Zamani easily tossed Danyal out of the ring.

Zamani left the ring and was approached by Pitricus.  The tavern-owner made the ugallu explorer an offer.  If Zamani and the party could bring back a token of greatness to the Thrice Charmed Demon, Pitricus would give them a significant quest.

The deal was almost prophetic.  Just at that very moment, a scream could be heard from the far bank of the river.

The party ran across the field and saw a young woman being chased by six shadowy spirits. The woman leapt into the river, swimming frantically towards the party.  Quickly the party began peppering the Spirits of Wrath with crossbow bolts and Arcane Flares.  When the undead realized that their threat was on the other side of the river, they turned incorporeal and flew across the flowing waters.  Once corporeal again, the party let loose their attacks.  Yaren's blade and Shenuesh's claws joined with Zamani's fists and Verenn's spells to dissipate the undead.

After Elder Meena spoke with the poor farm girl he turned to the party.  The Elder feared that the Falling Star seen earlier in the day had broken the seal of the Screaming Crypt.

Shenuesh frowned.  "That's the trouble with Ardeyn," the Adept said.  "Everything's built near a Screaming Crypt."

"So… We probably shouldn't kill him." - Verrenn talking about the Elder's son.
"If we kill him we just need to make sure the body disappears." - Yaren's response.

"He's got what you might say is a weak constitution." - Shenuesh referring to Verrenn.

"Oh that's funny, I used to live too." Verrenn joking about his undeadness

"I just said I'd feel less bad." - Frank on why Andy should break his limbs playing bones.

"Why aren't you betting on me?  You saved me from a gladiator pit!  I'm a gladiator!" - Zamani was ticked off that Sister Sariety didn't want him to wrestle.

"Yeah, I can't let them kill my idiot grandson…" - Marc about Craig