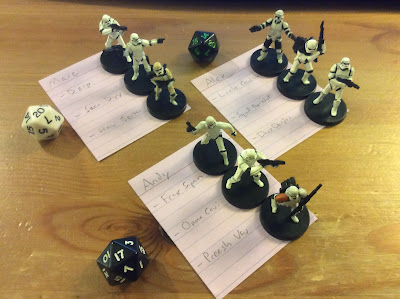 I know a bunch of my friends (myself included) are trying to stay away from social media.  Although I haven't seen any spoilers yet, I know they are lurking out there… just waiting to grab my eye and spoil Star Wars: The Force Awakens!

Damn, the Internet can be a jerk sometimes!

But I need to be on here at least a little bit, as I have work to do.  This Saturday I'm running a Cypher System: Star Wars adventure that I've titled Between the Rocks Waits the Hard Case.  I thought that I had enough pre-gen characters for the game… six really cool pre-gens ready to stomp some Rebel butt.  Of course then I did the math, and realized that I could be a character short.

So I decided to make some stormtroopers.

Actually, I only created one stormtrooper, but gave that character the "Dies" focus out of +Ryan Chaddock's book The Translation Codex.  The focus is designed so that a single player can be a group of minions.  All of the Focus abilities require the character to "die", and then another appears in the next round.

For example, the First Tier ability, "Hidden Danger", allows the character to spend one point of might to find a trap or threat, but then get killed by the threat.  The character discloses the threat to the rest of the party just before death (or perhaps while they are dying.  One round later a new character appears, with all the same skills and abilities.

As a "bonus feature" for this Saturday's game I decided to feature the Stormtrooper build on the blog.  Enjoy!