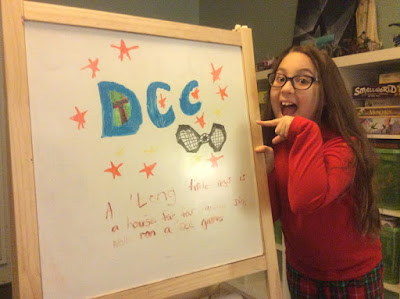 An Ewok, a Bothan, and a Gamorrean Roadie Walk Into a Cantina…


Last week I cooked up my conversion notes for running a Star Wars role-playing game within the corrupting confines of the Dungeon Crawl Classics Role-Playing Game.  The timing was just about perfect.  I was super excited for DCC awesomeness rolling the Kickstarter campaign for the 4th printing of the rulebook, and just about everyone I know is salivating for Star Wars: The Force Awakens.  So I just merged the two in a grand experiment.  But I was left with a serious dilemma.

I didn't want to wait until January to play this game!

In my original plan for Villainous Scum, I intended on running the adventure, Wrath of the Gungan Horde. at our special New Year celebration with the Norwin Game Knights on January 2nd.  But as I looked at the calendar I kept realizing that I would have to wait four weeks to play my Star Wars/DCC mash-up…

This was unacceptable.  I needed to put together some kind of playtest, and fast, or I was going to drive myself crazy.  So the call went out on Google+, far and wide, for players.  I ended up with five willing victims:


I had the following goals for this playtest:

Since my first post there were a few new rules that the players cooked up.

In addition to the other character classes in Star Wars DCCRPG, the Ewok seemed to be a perfect fit for the craziness of this game.  Actually I need to clarify: Reid's interpretation of a human-devouring, bounty hunting, two blaster wielding Ewok was the perfect fit for the Halfling class out of the DCCRPG game.

When we started off the adventure, the players discussed some of their gear.  Alex brought up the Stimpacks he was carrying, and I determined that they would heal 1d6 hit points.  Since Dalen was the only character with some Bacta, having another character able to heal would be a great addition.

While I can't claim credit for firearm and grenade based fumble charts, Reid used some of his own retains for his Waargul and the rest of the book.  These fun and exciting charts can be found in UX01 - High Caliber Hijinx, a Crawling Under a Broken Moon supplement!

While I wanted to get to a gaming table as fast as "Ewokingly" possible, I didn't have anything ready to go for Sunday night's game.  But with a growing collection of published modules and zines it didn't take me long to find a suitable adventure.  Crawljammer #1 featured an adventure I had been planning for my Disney Crawl Classics game at some point.  A short, 1st level romp called Cry Freedom and Let Slip the Bat-Men of Venus.

Obviously I couldn't use this exact title, and the adventure needed some re-skinning.  I ended up making the following modifications to +Tim Callahan's adventure to make it feel a bit more like "Star Wars".

During the player characters' quest to find suitable technological relics, they had some memorable moments:

Okay, so that's not all that happened, but I don't want to spoil the session completely.  I also didn't plan on writing a full post-game play report.  But we had a great time.

The Dark Side… and the Light

Overall the adventure was enjoyable. The session certainly felt somewhat like Star Wars, although a slightly more zany and silly version of the beloved saga.  Perhaps more "Spaceballs" than Star Wars.  After only a single session, its hard to figure out if this is more because of the group or the over-the-top nature of DCC.  A second game will be necessary.

I should note that playing with some different gamers, especially Reid, gave me the opportunity to polish some of my DCC knowledge as well:

I'm certainly interested in learning how the game will feel when using a home-brewed Star Wars adventure.  But with that said, the Crawljammer source material this adventure was an exciting romp!

"He's kind of like the Pillsbury Doughboy, but with a mouthful of human." - Reid describes Waargul.

"I'm just hoping they get curious enough to come outside and see who's playing." - Marc hoped that Meatloaf could entice the fortified Zanists.

"Look, I was a barista, come on!" - Alex hoping that his skill with an espresso maker could let him operate a cyber-zombie remote control.

Maybe you're just here for the Dungeon Crawl Classics goodness, but I'm going to plug next Sunday's upcoming video anyway.  On Saturday December 13th I'll be on Google Hangouts On Air chatting with +Ryan Chaddock and +Marc Plourde.  The topic will be "Running Star Wars with the Cypher System."

There are two ways to watch:

If you missed a Villainous Scum blog post, you can catch up here: