A Festival of Iron - A Numenera Adventure 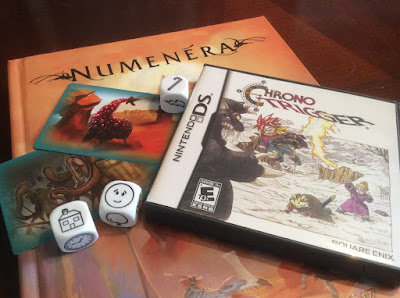 (For best reading, make sure to listen to Mariachi Entertainment System's cover of the Millennial Fair music from Chrono Trigger.  Oh, and then like and subscribe to them, because they are EPIC!)

A couple weeks ago I posted a request for Numenera players on the G+ Cypher System One-Shot Connection.  It had been quite some time since my last one-shot, and I wanted to keep the good vibes flowing in our new group.  I quickly gained a bunch of participants, but felt confident that by game time I'd be prepared with an adventure, perhaps something out of the Cypher Caster or Weird Discoveries.

The days ticked by, one by one, and I kind of forgot to prepare something.  I thought to myself, "maybe I'll just wing it on Friday."  Even though the Weird Discovery adventures are a piece of cake to cobble together, I always have an easier time running my own Numenera adventures.  Plus, I had my Numenera Cypher Chest and Rory's Story Cubes to help me flesh out any details.

So Wednesday morning, while enjoying my banana with peanut butter breakfast, I wrote down four sentences/sentence fragments:
The most important part of this was the Iron Wind.  The haunting details of this terrible Ninth World scourge can be found on page 135 of the Numenera rulebook.  The Iron Wind is a storm of rogue nano machines that painfully transforms everything it touches.  Flesh becomes steel, stone becomes bone, new organisms sprout from old.

I'm probably wrong, but to date I haven't read a Numenera adventure that featured the Iron Wind as the principle antagonist.

Going into Friday I was confident that I could come up with something crazy completely on the fly, but I decided to expand on my notes and add a few more.  I had a couple hours before game time, so why not make things look a little more professional for my players?  I took those few sentences and began expanding into a full adventure outline.

Back in January I posted a similar outline for my first draft of Metal Myk's Mercs, and it seemed fairly well received.  Perhaps you can use this outline as a starting point for your own adventures! 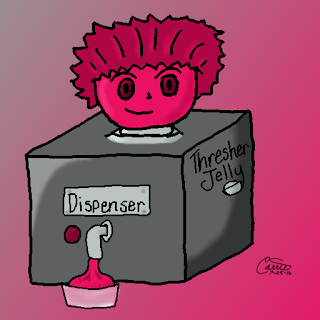 A Festival of Iron

(GM's Note: I originally titled this "The Iron Festival" but I think I like this new title better.  Let me know if you agree/disagree.)

Sider (pronounced sid-ur) is a small village of about 1,000 located on the Cape of the Maw in the Sea Kingdom of Ghan. Although Navarene claims the Westwood, the people of Sider have mechanical devices of their own, and great “battery boats” that take them across Ryness Bay. These “lumber pirates” have outwitted Navarenes, the Emol family, and the Culova, to supply the City of Bridges with some of the finest wood available.

But they have managed to keep the real treasures of the Westwood for themselves.

The Siderian lumber pirates discovered that many of the trees in a particular grove of the Westwood have pieces of the numenera buried within the rings of the trees and contained within ancient amber.  These caches contain some of those most incredible cyphers and artifacts ever to be found in the Ninth World.

Every year the people of Sider hold a special spring festival to celebrate last year's “wooden raids" and boost excitement for the upcoming summer of lumber piracy.  They call this the Gatherer's Festival.

The people of Sider benefit from some terrific machines that have been left behind by a prior world, and so they are a people of tinkers and machinists.  All Siderians have the equivalent of the "Fuses Flesh with Steel" focus, and are born with their mechanically augmented bodies.  As Siderians grow up, they consume a diet high in metals that helps their bodies form proportionally.

(GM's Note: Make sure to come up with an interesting augmentation for every Siderian the party encounters.  Perhaps they have a metal jaw, or legs, or arms.  Maybe it's just a metal mohawk   Each one should be unique.)

(Another GM's Note:  Not only did I have the Cypher Chest and the Rory's Story Cubes to help we with adventure generation on the fly, I also cracked open my Dungeon Crawl Classics RPG rulebook!  In the back of the book is a great table of random NPC names.  I borrowed quite a few.)

In previous years this celebration happened outside, but this year Mindus, elder of Sider, erected a grand dome containing hundreds of numenera enhanced Westwood saplings, and illuminated by ever glowing lights acquired on a previous raid.

The Festival Dome is comprised of a single entrance and three step-like tiers:

Before the Iron Wind

(GM's Note:  I ran this as a 2.5 hour adventure.  I let the PC's explore the fair for about half of the game before having all hell break loose.)

After the Iron Wind

(GM's Note: If used as an adventure for first time Cypher System players, make sure to point out that with an asset, a trained skill, and a level of effort a difficulty 7 easily drops to a much more manageable difficulty 4.  Encourage creativity!)

We had three PC's during last night's game:

There were a ton of creative solutions to the challenges facing the group.  Sam role played Voren as hating Aeon Priests, so he used a cypher to teleport himself to Kishta's automaton directly from Tier One.  I offered a GM Intrusion to have Voren appear directly on Milo's shoulders.  This interaction created an easy connection between the PC's, Romm, and Kishta.

Since the group's nano didn't have the Scan esotery, I inserted a new artifact on the Aeon Priests that Illid pocketed:

To escape the Iron Wind, the PC's scanned the Time Machine Discovery, figured out its use, and then talked Kishta into using Milo to lift the two pieces together.  Kishta had been busy caring for her father, whose arm was terribly injured.  During the demonstration of the device, the volunteer (Tes) had a cell disrupting cypher that exploded!

I almost forgot to add, that when Voren got hit by some Iron Wind, I dipped into my crazy archive of memories and brought out Kuato!  Remember that mutant from Total Recall?  Voren felt a humanoid shape appear in his belly, which he immediately carved off.  Poor guy!

We had a great time last night, and hopefully some of you readers may find this adventure worthy of placing in your own games.  If you do happen to use this adventure, or even a part of it, please let me know! 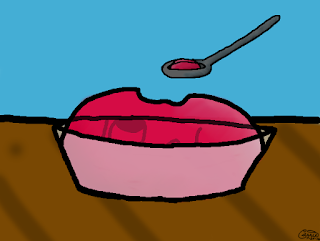