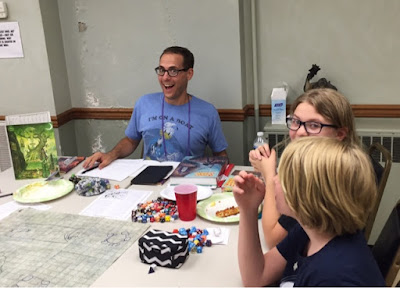 From the Seas to the Stars

I didn't expect the creation of the now legendary Headless Goat Dragon Sezregoat.

I didn't expect for eight of the PC's, including all of the 2nd level scurvy wastelanders from our first act of Tower of the Black Pearl, to teleport completely out of the adventure mid-session.

I didn't expect a near TPK (total party kill) after the remaining 0-level characters slaughtered each other during the last scene in front of the Dragon Statue.

I didn't expect to end this adventure on the deck of the starship Enterprise (the JJ Abrams version.)


I'd like to offer some clarification as to why there are three groups of player characters (PC's) represented in this month's Dramatis Personae.  This is a DCCRPG World Tour 2016 campaign, run at our local game club, the Norwin Game Knights.  Each month we let new players join in the fun, and frequently we get first time RPG'ers!

The first set of characters, we'll call them the "Post-Apocalyptic Time Traveling Buccaneers," (aka, the original "Scurvy Wastelanders") were those present during our last session of this campaign, back in May.  The second set, the "Time Travelers in the Egg", represent the new players just joining our Tower of the Black Pearl adventure.  Included in this group are a pair of PC's who were in previous campaign play sessions.

Something kind of crazy is going to happen in the middle of the adventure, requiring many of the players to take on the roles of 0-level "Lost Pirates."  That's the third and final group.

The Time Travelers in the Egg
The Lost Pirates 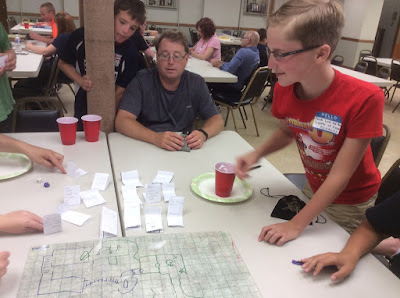 After following a blood-magic power portal to a secret, subterranean sea-cove, and defeating a band of humanoid pirates, our scurvy wastelanders are blinded by a brilliant flash.  It is a time-traveling egg from the Weird West, piloted by Fenrir the Robot Cleric of Google!  Fenrir and Doug the Dwarf bring with them eleven new souls to help their companions complete their quest for the Black Pearl.

Two paths lay before the scurvy wastelanders: a natural cave network to the north or a wooden door to the east. The party choses the door and discovers a room covered in runes.  Several clay urns rest upon a shelf, and Lord Old Man Legolas of Ikea (LOMLOI) starts breaking them open.  Inside are desiccated organs, imbued with strange and alien magic.

The scurvy wastelanders begin eating the ancient organs.  Hey eats first and grows a face on the back of her head.  Fenrir (a robot) eats next, and even though they are not organic, they grow eighteen inches.  LOMLOI takes the brain and attaches it to the neck of his trusty headless goat.  This is where things go horribly wrong.

The Headless Goat Dragon produces waves of noxious death flatulence that kill several members of the party.  Even the legendary LOMLOI is nearly killed by his beloved headless goat's hatred.  The scurvy wastelanders battle the dragon, but most of the party are not strong enough to be effective.  Everyone turns to LOMLOI to use his magic, so he does the one thing that he believes will save everyone.

Instantly LOMLOI and seven other members of the party are teleported elsewhere (313 miles away.)  Mikasa, Lucky Svetlana, Namor, and Big Guy are left behind.  They run.  The fleeing peons run all the way to a boat captained by an undead ferryman.  They all pay the ferryman and take a scenic boat ride across an underwater lake to a small beach.

On the beach are a bunch of Lost Pirates.  They join the rest of the Time Travelers and continue their search for the Black Pearl.

Pursued by Sezregoat, the party proceeds through a series of trap laden rooms.  A room that floods with water, a trap door, and a very dangerous rope bridge.  Five would-be-heroes fall to the traps before the team discovers a great sarcophagus on the opposite side of the rope bridge.

The party takes the lid off the sarcophagus, revealing Sezrekan's original body, in mummy form.  Toriel tries to take the skull of Sezrekan, but the lord of dark magic forces the tailor's brain to come out of her nose.  You Don't Understand Me Mom (Y-DUMM) takes the crown of Sezrekan, but finds all her limbs replaced with tentacles.  Finally Legolas Jr. tries to communicate with his grandfather's patron, and the mummy hands over a pair of ruby gems.

Knowing that the gems will fill the eye sockets of the blood-magic teleporters at the base of the Tower, and fearing the Sezregoat's pursuit, Legolas Jr. leads the group out of the sarcophagus room through a secret door, and back to the Tower.

Taking the ruby-eyed portal at the Tower's base, the team is transported into a long chamber.  On the opposite side of a long, water filled room, is a Dragon Statue.  In the statue's mouth the Black Pearl!  Although a great pool filled with sea snakes separates the party from the statue, Y-DUMM is unharmed as she uses her tentacles to swim to the other side.  One by one, the tentacled Goth Wiccan helps her team swim to the other side.

This is where things went... awry.

Legolas Jr. somehow knows his grandfather's secret, that Sezrekan did not wish for Jack Sparrow to have the Black Pearl.  Namor the Atlantean kills Legolas Jr. for being in league with Sezrekan.  The entire party erupts in a bitter, inter-part battle that costs the lives of Namor, Gaster Follower #1, and Bernie Sanders.

Next, Polar Bear & Jelly (one character, strange name) takes the Black Pearl, causing a great rush of water to spray out, tipping the statue on top of Polar Bear & Jelly, Lucky Svetlana, and Y-DUMM.  They all die.  As the room continues to flood Mikasa, Garrett Cole, and Bernwald Sandertap flee to the top of the Tower.  Captain Jack Sparrow awaits the Black Pearl on board the Black Pearl, but Mikasa crushes it, ending its evil magic.  Captain Jack leaves the party behind, but they find the original scurvy wastelanders' dinghy, and sail to shore.

LOMLOI, Doug, Lisrayten, Scrooges McDucks IX, Fenrir, Pzarro, Hey, and Napstablook stand on the shuttle deck of the USS Enterprise, three-hundred and thirteen miles above the Tower of the Black Pearl.  A team of red shirt security personnel find the scurvy wastelanders.

One of them shoots and kills Napstablook.

"You name him Bob, it's a death sentence." - Craig.  I decided to make him roll a Luck check to see if he wouldn't just die in a dumb way.  He failed.

"You said when I died, I'd become a god!" - Evan, when he thought Lord Old Man Legolas was going to die.  I don't remember making this promise.

"Can we use our hero fuel?" - Ethan decides to sacrifice Michael's characters to hold up a door. 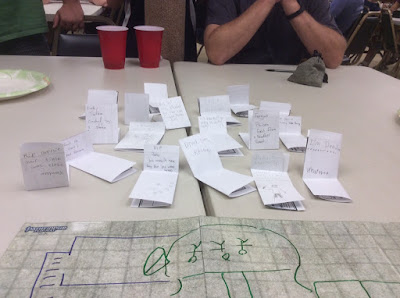