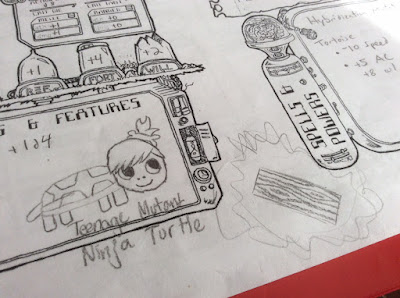 The Mutant Crawl Classics Kickstarter is entering the final days of a much anticipated campaign, so I thought I'd share some of my thoughts on the +Jim Wampler's labor of love.  A long-time listener of the Spellburn podcast, I've heard Judge Jim make reference to his post-apocalyptic variant of the Dungeon Crawl Classics system on several episodes.  My interest was piqued, but unfortunately I had a limited frame of reference for the original inspiration.  MCC seemed rooted in the old Gamma World system, and while I've flipped through some of the old books, and glanced at the newer editions, I've never run a Gamma World adventure.

The MCC preview in last year's Goodman Games Gen Con 2015 Program Guide proved to be an excellent window into the future of this product, transforming me into a hungry, roxen-meat craving, wannabe wasteland crusader!  Like many other fans, I joined the MCC Facebook page and waited patiently for news, any kind of news, of the upcoming Kickstarter campaign.

After getting my hands on the Free RPG Day copy of "The Museum at the End of Time" I quickly scheduled an Actual Play video to showcase the MCC system:

To prepare for the adventure, I sat down and started listing potential sources of inspiration, not only for the Museum, but also for future campaigns.  Although clearly post apocalyptic, with a backstory that features something called the "Great Disaster", Mutant Crawl Classics reaches much further in the future than Mad Max or Fallout.  Terra A.D. (After Disaster) is a world where technology is studied, worshipped, and sometimes feared.

Judge Jim has already posted his list of "Appendix M" inspiration on the Kickstarter page, and you should definitely check out his selections here.

But allow me to add a few of my own:

You know the story.  Take your pick of either the old H.G. Wells book or one of the movies, but the far future world of the Eloi and Morlocks could easily be used in a Mutant Crawl Classics campaign.  Pacifist Pure Strain Humans living just above endless caverns filled with bestial, near-cannibalistic Mutants or Manimals.  This could make for a single adventure, or possibly the starting point for an entire campaign setting.

A Nintendo title from 1990 by SNK, in Crystalis you play a nameless hero who erupts from some kind of stasis pod after the Earth has been transformed by nuclear war.  Magic returned to the Earth, and you set out on a quest to stop an evil emperor from gaining control over a magical tower.  The game does feel quite a bit more like science fantasy than science fiction...hmmm... science fantasy...

Wait.  Isn't this another tabletop RPG?  Yes, and it's one that I tend to discuss quite a bit.  But I bring it up now because the 9th World of Numenera has some similarities with Terra A.D.  Terra A.D. is a place where technology exists, but the means to create it have been forgotten.  Thus, anything left from the previous age must seem like magic.  Numenera follows the same premise.  The key setting difference between the Ninth World and Terra A.D. is a simple (but incredibly vast) measure of time.  Whereas Numenera takes place one billion years in the future, from what I've read of both the preview and Judge Jim's posts, Terra A.D. exists several thousand years from now.

This isn't the first time I've brought up a Cypher System/Dungeon Crawl Classics mashup.  A few months ago I created a list of 9th World occupations for something I like to call Numenera Crawl Classics.

Speaking of tabletop RPG inspirations, has anyone discussed Paranoia yet?

If you haven't played Portal 2, stop what you're doing right now and go play.  Once you're finished you can come back and finish this post...

Much of Portal 2 feels like questing through a far-future, puzzle-filled dungeon with only your trusty Portal Device (*cough* Artifact) to save you from various AI's.  Most of the test chambers are dilapidated and run down, covered with weeds and dripping with foul, oil-filled liquid.  The only way through is by completing the tests, or else you risk an AI's ire.  I could see Patron write-ups for GLaDOS and Wheatley for sure!

Yor: The Hunter from the Future

The eternal Reb Brown classic!  Dinosaurs, barbarians, lasers, this movie just SCREAMS Mutant Crawl Classics!  It's as if the entire movie is one long campaign, starting off as more of a primitive adventure but eventually bringing in all kinds of artifacts and gear.  As a child of the 80's, I fondly remember watching this movie on HBO.  This was back when you had to toggle something in the back of your TV to get cable to work.  Just like manipulating an artifact!

The first thing I'm doing when I get my MCCRPG core book is recreate Yor as a future player character.

If you are unfamiliar with this movie, I highly recommend you watch the Spoony One's full review.

So these are my suggestions, but what would you recommend?  What other books, movies, television shows, or video games could be added to +Jim Wampler's "Appendix M?"